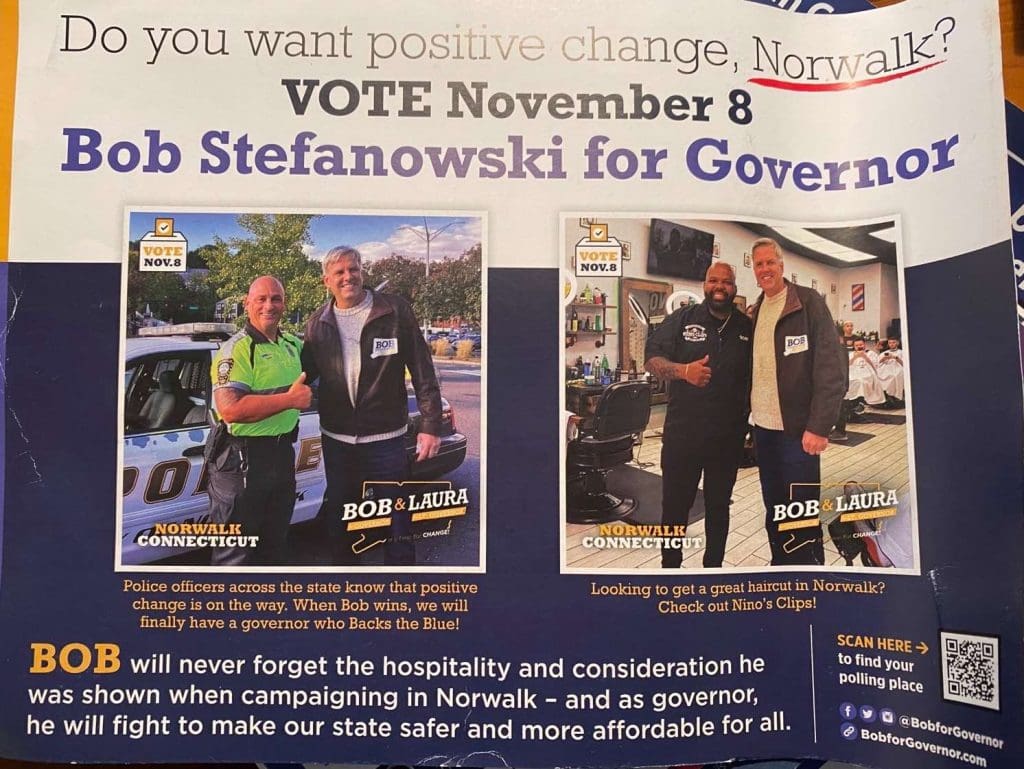 Questions have been asked all over the country about the use of public resources – in this case a police uniform and police vehicle – in a political campaign. In 2019, a Jacksonville, Fla., Ethics Commission weighed in, saying that a local law couldn’t be used to keep officers in uniform from appearing in TV ads, only from campaigning face-to-face.

In Texas, the issue pivots on whether the officer bought the uniform or the municipality did.

“I was made aware and we reviewed and found that it was not approved as an endorsement by the officer.  He was not aware the photo was to be used in promotional material. During campaign season numerous photos are taken in a variety of environments.  We do have a policy against endorsements in uniform or which may appear that the department is making an endorsement of any candidate,” Kulhawik said in an email. 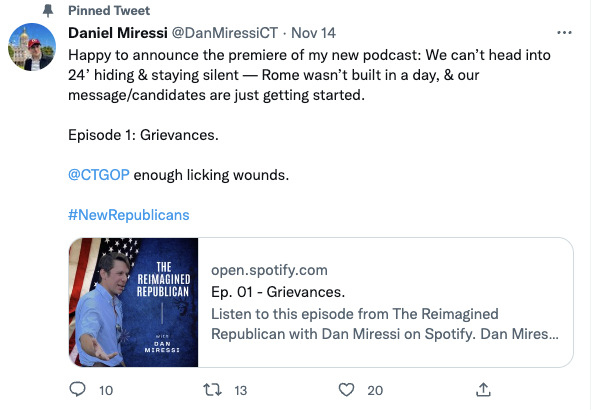 “What we plan on doing is continuing to spread awareness about the issues, about, you know, how awful Bob Duff is, and Ned Lamont and the rest of the Democratic cartel that run this state,” said Miressi.

Miressi registered as a Norwalk voter three days before being endorsed by the Norwalk Republican Town Committee to oppose Duff. He won 34.5% of the vote Nov. 8, the poorest showing for a Republican Duff opponent since 2012, according to Secretary of State records, as the only Republican Duff opponent who also faced an Independent candidate. He didn’t apply for Citizens Election Program (CEP) funding.

The State election fund is “dishonest,” because people may not “even know that they’re using taxpayer money,” he said, calling it “campaign welfare” and a “slush fund.”

Democrats have “stolen people’s hopes” and “Liberalism is a mental disorder,” Miressi said, calling the Democratic Party “an anti-American party.”

But he didn’t stop at the opposition party.

Republicans had no message, and feeling unsupported, he went “grassroots,” he said.

Miressi said that when he started his campaign, he was “overly ambitious” and “we didn’t really know what we faced.”

“We wanted to get this (podcast) out on the books because it is a travesty that the Republicans are running and hiding after they lost an election,” Miressi said. “Fine. We will see you in 24. We have a lot of things planned. … Ned, Bobby, we’re coming for you.”

Just over a year ago, on Election Night, Republican Mayoral candidate Jonathan Riddle said he’d be running again in 2023.

Democratic incumbent Mayor Harry Rilling won with 60% of the vote.

“I’m going to keep Harry accountable, I’m going to watch every single move that he does, I’m going to call out all of his failures,” Riddle said. “And we are going to watch the Board of Education to make sure that they’re doing the proper things for our children in this city, and improving the education instead of focusing on things that are outside of the classroom.”

A Nov. 15 email to Riddle’s Mayoral campaign address, asking if he still plans on running and if he’s on social media with Rilling criticisms, went unanswered. It didn’t bounce back as undeliverable.

Norwalk Republican Town Committee Chairman Fred Wilms said, “We have not seen or heard anything from Jonathan in the past year.”

Bob Duff and Daniel Miressi did something that other contestants have not – beat competitor Lisa Brinton in votes cast at Rowayton Elementary School.

Brinton lived in Rowayton for 22 years before moving to Shorefront Park two-plus years ago. She was active and is well-known in her former home area.

She’s run city-wide four times and until this election, gotten the most votes cast in Rowayton for the office she was seeking. Records show:

This September, Brinton jumped onto the ballot as an Independent Party opponent to State Senate Majority Leader Bob Duff (D-25), saying that the Independents were uncomfortable with Republican candidate Daniel Miressi and she wanted to keep their slot on the ballot.

Brinton did not reply to an email giving her a chance to respond.

The chief said we have a policy for doing endorsements in uniform. So the punishment is? You guessed it; nothing! Suda would pose for a picture with Bugs Bunny if he could. Just another photo op for his facebook account. The indians run the roost in our department anyway. Thats about as hard as our republican town committee worked this past election anyway. They are basically non existent in Norwalk. They couldnt win a game of duck duck goose if they were the only participants!

It’s clear from Daniel Miressi’s comments that he thinks local politics is a bloodsport. What’s also true is that adversity reveals character, and whether one’s learned from experiences.

Then there’s this old chestnut: When one’s opponent screws up, it helps you, so get out of the way.

Look, the singular, primary objective of the Brinton campaign for the state Senate seat in D-25 was to secure the votes needed for the Independent Party to hold the line. Full stop. Lisa was on the record multiple times. She succeeded – well beyond the results many other “I” candidates received across the state. THAT is the story. Lisa succeeded. Thank you.

As for Rowayton, missing from this analysis is the impact of the recent gerrymandering by the CT D-party. Rowayton was essentially split in half. I’m sure that made no difference. If it did – the “balanced slate” of the Dis-E DTC would be writing op-ed’s. In fact, there has been almost zero coverage on how D-25 was shaped to benefit Bob, how D-142 was butchered (the “New Canaan noodle”) to protect Lucy, how D-140 was created to guarantee how many years of unopposed D-party rule, and how D-137 was squeezed.

Election deniers like to point at machines, nefarious plots, and conspiracy theories run rampant. The fact is – the elections are “stolen” but sadly, it’s done in plain sight. No one says a word because – hey, “everyone does it”. Democrats in Norwalk will never admit they have destroyed democracy in their own city. Nor will the media cover it.

As for Jonathan Riddle – riddle me this batman? Other than on the side of a milk carton, where has anyone seen Nick Sacchinelli, Glenn Iannaccone, Manny Langella, or the “Georges” – Theodoridis & Tsiranides? Perhaps there was a “purge” that went un-reported? Men with mouths replaced by compliant replacements? You tell me.

Hey Tyson
The republicans have a strong party in Norwalk and have had a great agenda the last few elections
Unfortunately our state is a blue state. Always was and always will be
I say instead of sitting behind your keyboard throwing stones why don’t you get involved with the Republican Party and see what you can get accomplished. Ok ??

What is your agenda? Bryan Meek is the only one with the heart of a lion that speaks up against the other half. This city needs dialogue and people working together for the common good. Elected officials are supposed to work for the citizens of Norwalk. Our council sets agendas so that dialogue is kept to a minimum. I am neither a registered democrat or republican. I believe in people with good ideas and good character. I dont hide behind my keyboard at all. I speak my mind based on fact and some dont like it. I sign my real name on every comment and stand behind it. Nancy offers a wonderful forum for all to enjoy. I have a passion for Norwalk being a fifth generation native. Someday when my 4 sons are done with school, I am done with coaching and watching their games, and running my business I might find time to be involved in city government in some shape. In the meantime Bill, maybe you can tell me a little about your republican agenda. Sounds like you experience many of the same frustrations I do. Thanks for the invite. Its the second one this week to join your party. Happy Thanksgiving

I will neither confirm nor deny this statement…

“As for Jonathan Riddle – riddle me this batman? Other than on the side of a milk carton, where has anyone seen Nick Sacchinelli, Glenn Iannaccone, Manny Langella, or the “Georges” – Theodoridis & Tsiranides? Perhaps there was a “purge” that went un-reported? Men with mouths replaced by compliant replacements? You tell me.”

…but what I will confirm for context is that I was a moderate Democrat. Most people who work in the business world are…simply put, objective. I was unanimously elected and the second-highest vote-getter At-Large yet found myself working against the machine just 2 short years later. At that point, I shifted focus back to my career vs. the headwinds I was clearly working against internally.

Anyone who voted for the efficiency study should be all you need for your answer. Shame we did what we were elected to do, keep the tax-payer in mind during “unprecedented times”

Full disclosure – “I’m saying this” – not Manny. But I can read his comment, and come to my own conclusion. You should do the same.

Consider this: an “objective”, and widely popular (“at Large”) moderate representative & member of the Democratic Party could not find a comfortable place inside the current Norwalk DTC. Read it again. Headwinds. Thank you for your candor, Manny – so few are willing to say anything. What exactly is to fear? Please ask yourself, and even – ask around. Why are so many of Norwalk’s moderate D’s unwilling to stand up and challenge the tilt?