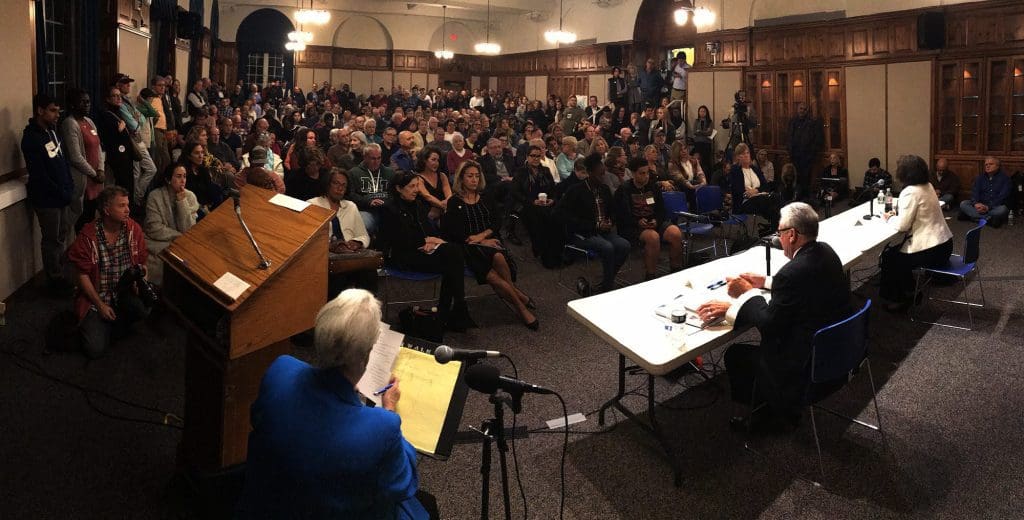 NORWALK, Conn. — Here’s some election notes for you:

The City Hall community room was stuffed past the gills on Monday for the League of Women Voters of Norwalk Mayoral forum, a debate-like conversation between Democratic incumbent Mayor Harry Rilling and his Republican-endorsed challenger, Lisa Brinton. About six people were out in the hallway, organizer Mary Oster said, adding that two years ago the event was in Concert Hall but that the audio was bad.

Former Mayor Bill Collins was in the standing room only section Monday.

“That was the biggest debate crowd I have ever seen, by far,” he said in an email. “I sense that many people are really working on making up their minds this time. I’m just sorry that more vision did not emerge, but then that has been Norwalk’s problem for many years.”

Rilling, Brinton, and most of this year’s Board of Education candidates plan to meet with the public at 7 p.m. Tuesday at Grace Baptist Church, located at 17 West Ave.

Congregations Organized for a New Connecticut (CONECT) is hosting the 2019 Candidates Action Assembly. Rilling and Brinton have said they’ll be there, according to a press release. “All of the Board of Education candidates running have been invited to attend. Godfrey Azima, Diana Carpio, Jason Christopher, Erica DePalma, and Alexandrea Kemeny have confirmed their attendance.”

“Issues addressed will include: gun violence, security for religious institutions, the need for ongoing anti-bias training in schools, and the racial disparity in school discipline,” the release said. “Candidates will first listen to stories and concerns that have been shared within CONECT’s member congregations in greater Norwalk, and they will have the opportunity to respond to these stories and concerns.”

The release explained, “CONECT, a broad-based community organization made up of over 25 churches, synagogues, gurdwaras, and mosques in New Haven and Fairfield Counties (representing more than 15,000 people from different races, faiths, cities, and suburbs), have joined together to take action on social justice issues – including  gun violence, health insurance affordability, police reform, immigration, and more.”

Democratic incumbent Mayor Harry Rilling and his Republican-endorsed challenger, Lisa Brinton, were each given five minutes to speak to the West Norwalk Association last week and delivered comments that by now are familiar to anyone following the election.

The event drew less people than in previous years, with comments made that there were more candidates than audience members. Up to 40 non-politicos watched the speeches and constituent energy was low.