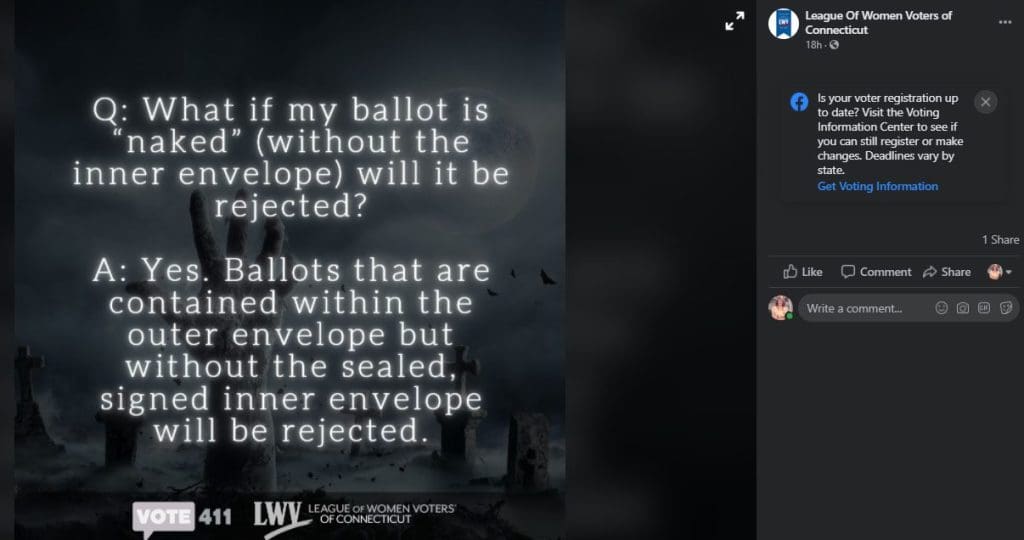 The League of Women Voters has posted seasonally-themed frequently asked questions. Click the photo to go to the slideshow.

Election Day is Tuesday. Many Norwalkers have already voted by absentee ballot.

NORWALK, Conn. — Some electoral information for you:

Reportedly, Norwalk registrars are spending their weekend processing absentee ballots and they’ve got their work cut out for them: the total returned was 15,000 at the end of the day Friday, according to the Secretary of State’s Office.

“The new law says we can open the outer envelopes after 5:00 p.m. on Friday – we are going to start this Saturday at 9:00 a.m.,” Norwalk Democratic Registrar Stuart Wells said. “Then on election day we can open the inner envelopes and start putting the ballots through the tabulators …With luck we will have all of the absentees that we have processed by Monday all counted by Tuesday night and then we can report those results.”

Even with all those absentee ballots, “The system to prevent a person from voting twice is fairly simple to explain,” Norwalk Democratic Registrar Stuart Wells said in a comment on NancyOnNorwalk. He continued:

“However any voter who received an absentee ballot, but didn’t cast it, may vote in person at the polls. Just destroy the absentee ballot, i.e. rip it in half before throwing it away so that no one could fish it out of a recycling bin and use it.

“Lastly, all those long lines of voters you see on TV, waiting hours to vote, are not Connecticut voters. Over one quarter of Norwalk’s voters have already voted by absentee ballot. They won’t be going to the polls, so there will be plenty of room for you to do so. The best times are mid-morning and mid-afternoon.”

The Connecticut Education Association recently graded legislators for their “overall support for issues important to students, teachers, and public education.”

“The report card recognizes legislators who are committed to giving students more opportunities for success and are working hard to improve public education and the teaching profession in Connecticut,” CEA President Jeff Leake said in a press release. “The report card is especially critical this year, as we face a triple threat from the COVID-19 pandemic, the ensuing economic turmoil, and the continued crisis of institutional racism and unequal justice across the country and in our state that have not adequately been addressed.”

CEA graded legislators by their record, and if their opponent filled out a questionnaire, also graded them. Local results are:

Duff and Dathan are also on an honor roll.

“The report card is based on legislators’ voting records, co-sponsorships of bills, advocacy, and responsiveness,” the announcement said. “Because the COVID-19 pandemic forced the closure before any education-related bills were voted on during the 2020 session, the report card is a combination of last year’s scores and legislators’ actions and advocacy supporting the rights of teachers to have a voice in the education of their students, the working and learning conditions of their school, and their ability to bargain for fair wages and benefits.”

Can you vote if you refuse to wear a mask?

The answer to that question is yes, but if you cause a disturbance, you might be removed from the polls.

Given the Governor’s executive order requiring masks in public spaces, moderators must wear masks, the Secretary of State’s Office said in a Friday video. But voters have a Constitutional right to vote. So what to do if a voter refuses?

A moderator must offer one of the following four options:

Moderators don’t have to immediately allow non-maskers to vote, they can ask the voter to wait off to the side, the speaker in the video said. And, again, moderators only have to offer one of the options. If the voter refuses, they can be asked to leave.

“Let’s say that the voter refuses all of the options that he or she was given, and they still won’t follow social distancing requirements or the masked mandate,” the speaker said. “… If all options have failed, and the voter is non-compliant, moderators can invoke Connecticut General Statute 9-230 to have that voter removed. This power is given to the moderator to prevent disorder, disruption and interference in the voting process. Ultimately, the moderators wield the power over the operations of a polling place and therefore they have the ability to remove voters who might disrupt order or pose a danger to other voters.”

Should you bring identification?

“New voters that did not complete box four on the voter registration card will get an Asterisk before their name in Federal Elections. THEY MUST SHOW ID OR ONLY GET A PROVISIONAL BALLOT,” Doyle Lyons wrote.

Young or new voters are disenfranchised from a complete ballot if they didn’t bring ID, she said.

“On a voter registration cards there are boxes to complete,” she wrote. “Box four requests your drivers {license number or} the last four digits of your Soc Sec number. Young students at the high school and new voters don’t complete. Therefore the State can’t verify who they are. In Federal and State Election they are marked with an asterisk which means that they must show Id.”

HowToVote.com states that if you don’t bring identification to the polls, “you will be able to sign an affidavit instead and then vote normally. If you’re a first-time voter without ID, you may vote a provisional ballot.”

You don’t need identification, according to Connecticut Secretary of the State Denise Merrill.

“When you arrive at the polling place the poll worker will request that you present ID but if you do not have any then in most cases, you may sign an affidavit in lieu of presenting ID.  There are several options for identification and they do not need to be a driver’s license or have a photo,” Merrill states on the SoS website.

If the first-time voter doesn’t have those things, then they have to cast a provisional ballot.

The Connecticut Working Families Party (WFP) has endorsed of 99 candidates for state and federal office.

“WFP candidates push for comprehensive healthcare reform that ensures that every Connecticut resident,  no matter their income or immigrant status, has access to affordable health care coverage – an urgent need, as the disparate impact of the pandemic has made clear,” the Working Families Party states on its website. “Additional policy priorities include advocating for a Green New Deal to transition the state’s economy away from fossil fuels, with environmental justice and job creation as a main focus; enacting additional safeguards to protect the rights of immigrant residents in our state;  and protecting collective bargaining in the state, and more.”

First, an observation: The Secretary of the State’s directive on what to do with mask-refusing voters understandably focuses on their constitutional right to vote and protecting other voters while that right is afforded to them. Nowhere is there anything in it that acknowledges that our poll workers are being asked to take extra risks to their health to do this. Nor is there any acknowledgement that the poll workers are already taking extra risks by working in the polls for 14 hours while each voter will be able to vote while spending only about 10 minutes in the polls.
Second, the current situation. Our absentee ballot clerks opened the outer envelopes of the ballots yesterday and checked for the presence of the inner envelope and whether or not it was signed. This was pursuant to the recently passed law allowing this and to follow the Secretary of the State’s very recent ruling that voters whose ballots were rejected because they failed to sign the inner envelope, will be allowed to go to the polls to vote. Less than one percent of the absentee ballots were rejected (129 at the moment), but most of the rejections were for not returning the inner envelope, or not putting the ballot in it. We have been unable, so far, to get instructions on whether those voters can now vote at the polls, although I do not see a logical reason to distinguish between them. We will be sending out a list of voters whose ballots were rejected to the parties and the candidates, etc. so that the voters might be able to find out about this change. We have to remove the marking on the official checklist that the poll workers use to stop voters from voting at the polls when they have already voted by absentee ballot. We hope to get answers today, maybe, if we are lucky, as we can’t wait forever to prepare the checklist (its over 600 pages long, in total) or to produce an accurate list so that these voters have a chance to learn that they may now vote in person at the polls.
Stuart Wells, Registrar

Working families publicly stated that they support defunding police, the Green New Deal and Socialism. They endorse anything but the Declaration of Independence and the Constitution. The tsunami of lawlessness has arrived in CT; brace for impact. If Biden gets elected, President Harris will take over in minutes; what they did to California, will be Nationwide. Will Nancy print this?