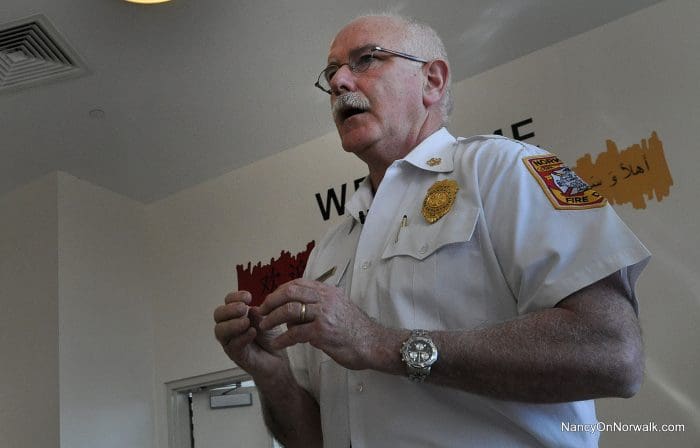 NORWALK, Conn. – Norwalk and the Emergency Management Team, received the Community Resilience Award from the CT/RI Chapter of the American Red Cross at their annual Hero’s breakfast in Stamford.

“This award is earned and shared by the entire team and is a great honor for the city,” said Fire Chief and Emergency Management Director Denis McCarthy in an emailed press release. “We couldn’t be prouder of all our city departments and partners involved – especially given this week’s weather.

“Every emergency that affects the city is different,” he continued. “Everyone plays critical roles during the different phases of the disaster cycle (prepare, respond, recovery and mitigate) to help the city, our residents and business community recover and become better prepared and more resilient for the next emergency. Many members of the team, such as fire, police and public works are visible to city residents, while other ‘unsung heroes’ perform critical tasks that many residents are never see such as ensuring the City receives FEMA reimbursements in large disasters and reaching out to social service partners to make sure their staff and clients are prepared.”

McCarthy ticked off a list of those involved in the efforts:

“These are only a few examples of the work done by the members of the team who represent the Utility companies, School district, Libraries, Norwalk Hospital and many more,” he said.

McCarthy said that, in advance of the expected blizzard on Monday, more than 40 members of the emergency management team attended a briefing in the Emergency Operations Center at the new fire headquarters.

“This was a snapshot of how well everyone works together and how the team has grown through the years and have benefited from trainings, exercises and previous responses. While many other members weren’t able to attend the briefing, periodic situational and weather updates were shared throughout the storm. Although, the forecast changed as the storm progressed and our area wasn’t as impacted as other parts of the State or New England, City Departments and Partners were well prepared to respond, open shelters and warming/charging stations, and more.

“As the City’s Emergency Management Director, we thank the American Red Cross for this award and appreciate all the City’s employees and partners who make the Norwalk more prepared and resilient,” said McCarthy. “It was an honor to join the mayor, police chief and deputy chief and others in accepting the award this morning.”

Also should acknowledge the firemen, that transported numerous accident patients to Norwalk Hospital in their fire trucks, during that surprise ice incident on Sunday morning January 18, 2015, when our DPW guys couldnt get in and the ambulances were trapped on the hill. Think some firemen were actually sent over to smith street to run a truck to the hill. One ambulance and two dozen cars were stuck and mangled at the bottom. Even the DPW truck wrecked at the hospital when it finally showed. Been said numerous times over the years, Alvord gotta keep Maple open, regardless, yet year after year he slips. Maybe the next guy that replaces Alvord will understand the importance of keeping ambulances rolling at all times, under all conditions. Anyway, shout out to all the firemen that went the extra mile that Sunday, nice work guys.

Yet Rilling and his puppet fire commissioners have not renewed the fire chiefs contract.. Amazing