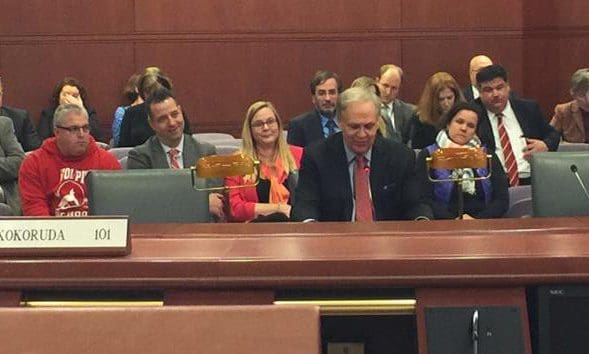 Correction, 3:51 p.m.: Fred Wilms brought Bruce Morris up to speak with him.

HARTFORD, Conn. – Here’s a thought: it costs more to live in some areas than others.

So said Stamford Mayor David Martin on Monday, in testifying to the state legislature on why the current system for education funding needs to be changed.

Norwalk parents Barbara Meyer-Mitchell, Marc D’Amelio and Drew Todd spent the day in Hartford, with D’Amelio and Todd having the honor of being the last speakers in the eight hour-long hearing.

Martin got in front of the panel about an hour and a half into the hearing.

Stamford is building a new school but even when its done 400 children will continue to learn in 20-year old portable classrooms, with no plans to replace them, he said.

“It is a common misconception that Stamford’s grand list, or Norwalk’s grand list, ensures that we have ample resources to satisfy our needs, without consideration of our specific challenges, and very importantly, our moderate income coupled with the highest cost of living in the nation,” Martin said.

Mayor Harry Rilling did not go to Hartford Monday. Rilling said he spent 5.5 hours in Hartford at the first hearing, on March 1, waiting to testify before giving up and coming home.

On Monday, State Rep. Chris Perone (D-137) brought up Meyer-Mitchell, the founder of the Facebook group Norwalk Parents for Education.

She acknowledeged Norwalk’s high property values but pointed out that the city has a significantly lower median income than its neighbors. Norwalk Public Schools have been cut to the bone and there’s nothing left to cut, she said.

“We are going to have a real problem if we don’t get more funding,” Meyer-Mitchell said.

State Rep. Gail Lavielle (R-143) asked her to elaborate; Meyer-Mitchell said library aides had been cut and there are no media specialists, there is no money allocated for library books and there are not enough high school teachers to help students get the 25 credits they need.

Fleischmann asked her if she knew how much Norwalk could raise with a one mill rate tax increase. Meyer-Mitchell knew the total grand list but did not have that statistic.

A short while later, Fleishmann asked Cantor what West Hartford’s mill rate is.

Fleischmann quoted Norwalk’s mill rate as being 26; Cantor said West Hartford’s is 39.9 and would have to be 43 if Malloy’s proposed budget goes through.

“The folks from Norwalk didn’t know but their grand list is nearly double the grand list of our town,” Fleischman said, guessing that one mill rate in Norwalk would be $11.2 million.

“It’s obviously a double bind you’re in with a grand list half of Norwalk,” he said.

Fleischmann sat quietly when Adamowski testified later that evening, during a segment of the hearing that was set aside for superintendents.

“With property value as its driving force, the existing ECS formula penalizes Norwalk for its location,” Adamowski said. “While the city has relatively higher property values due to its location in Fairfield County, the median income of Norwalk residents is 107 out of 169 towns, close to the bottom third in the state and well below that of wealthy neighboring towns. This disparity has long resulted in inequitable funding for Norwalk schools, and a disproportionate tax burden on residents.”

Adamowski suggested that the Committee use the proposal made by Wilms and Morris, for “a ‘tiered’ system of education foundation funding based on State District Reference Groups, in which districts of similar socioeconomic status are grouped together.”

“The Governor’s proposal is a step in the right direction in how Connecticut funds Special Education and helps bring stability to a system that is inherently unpredictable,” Adamowski said. “In the short-term, I hope that adjustments to the ECS formula made in this session will contain a similar provision for English language learners.”

Lavielle pointed out that Adamowski has experience with a variety of school districts.

“Sometimes it may sound as though, as we discuss Norwalk’s needs and so on, that it’s really a question of just Norwalk but in fact you have a much wider perspective,” Lavielle said.

An overreliance on property value as way to calculate educational funding is the number one impediment to equity, Adamowski said, calling 80 percent of the formula based on that value as “too high.”

“A school system that has 57 percent of its students, the majority of its students, classified as high needs students can never achieve equity in a system in which there is so much reliance on property value,” Adamowski said.

Norwalk has been shortchanged for years, Todd said later.

“A dollar is worth differently in different parts of the state,” D’Amelio said.

“This has been a true community-wide collaborative effort to fight for better schools and resources for our students,” Lavielle said in the release. “I can say with certainty that the individuals who put other commitments aside to spend the day in Hartford made it difficult for my fellow committee members to ignore the consequences of an arguably irrational formula for allocating education aid.  The strong testimony given by Superintendent Adamowski and several Norwalk parents helped raise awareness for the gross underfunding of Norwalk schools that occurs every year.”

NancyOnNorwalk asked if Lavielle had an opinion about how it might work out.

“Gail is emphasizing that it’s difficult to predict at this point, because we still don’t know what a lot of the bills will look like. The co-chairs admitting the formula is flawed does not necessarily mean they think Norwalk should receive more aid,” Connecticut House Republican Office Press Secretary Rick Joslyn said Tuesday.

“Remember when I wrote that anything can happen to a bill during the course of the session? Today almost the entire text of HB 7270, the bill that was heard on Monday, was removed. Only the section that includes the cost adequacy study remains. It passed. Text will appear at another time. Or not. If the Appropriations Committee puts it somewhere else. Or not. Same for SB 2, which will most likely be called for a vote on Friday…There is no broad consensus for the moment on ECS, so the suspense will most likely go on for a while.”

I WOULD LIKE TO THANK THE NORWALKERS AND OTHERS (STAMFORD MAYOR MARTIN) FOR ADVOCATING FOR FAIRNESS. Gail Lavielle, you are the best.Fred Wilms always there with the numbers Always there for Norwalk. But a special thanks to Marc D’Amelio and Mr. Todd and our superintendent. I can not imagine how grueling it was to be in cue for over 8 hrs before being able to speak. But like in baseball you were the clean up crew getting in the last hits. Your passion for our kids is appreciated.
It appears that the fix has been in for many years. The D’s have dominated the chairs of the committee’s and have worked the system for their own towns.(except ours) All we want is the doctrine of fairness to be applied.