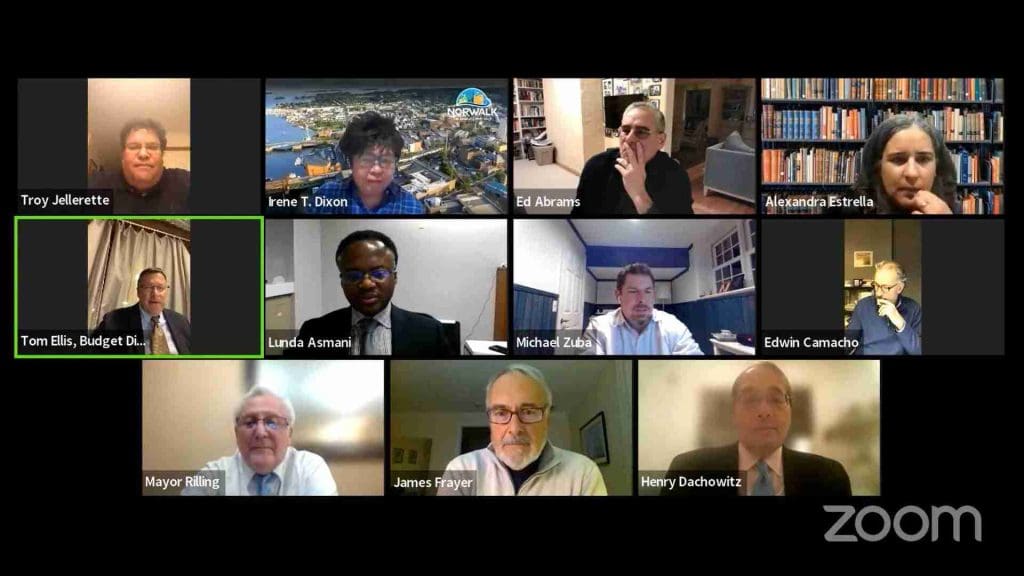 Norwalk Director of Management and Budgets Tom Ellis speaks to the Board of Estimate and Taxation during Monday’s meeting on Zoom.

NORWALK, Conn. — Some Norwalk Finance Department news for you:

Ellis worked as finance director in Bethany before coming here, he told Board of Estimate and Taxation members Monday. Before that, he was Greenwich Finance Director of Operations for 1.5 years, according to his LinkedIn page.

“Before that, I was in big banking, a lot of the big global banks for many, many years,” Ellis said. “Some of it in New York City and some of it in Stamford including Morgan Stanley, Bank of America, the investment banking arm of that, and my last stint in the private sector was with RBS, which is now NatWest markets.”

He was at NatWest/RBS for just over a decade, his LinkedIn page states.

“I’m a Norwalk resident. I live not too far from town hall,” he said, adding that he has a child attending fifth grade at Marvin Elementary School.

“We went on a on a nationwide search and narrowed it down to two finalists. Mr. Ellis was the was the final choice,” Mayor Harry Rilling said. “But it just goes to again, our policy of reaching out and trying to bring the best people into Norwalk to help work through the city help get things done with new ideas, new thoughts, new visions, and bringing us into the future.”

“I do not give out details on certain personnel matters,” said Director of Personnel and Labor Relations Ray Burney in late September.

Fogel became director of management and budgets in September 2018.

“We were looking for someone part time and Rita explained that she retired a couple of years ago but was interested in coming back part time to keep her hands in it. We’re very excited to have her on board,” Dachowitz said.

Nigri, a Milford resident, was director of the North Shore-LIJ Health System Grants Management Office for just over three years before retiring in 2016, her LinkedIn page states. Before that, she spent 17 years as assistant professor- adjunct at Albertus Magnus College, School of New Dimensions while holding other jobs, including associate director of grant and contract administration for Yale University for almost 11 years.

“She’s already coordinated with different departments on existing grants as well as looking into other grants we might pursue,” Dachowitz said.

“My background has been in medicine, education, research. And 100 years ago, I also worked in municipalities, for the Board of Ed, various boards of education,” Nigri said. “So I come from a broad wealth of knowledge. And my experience is only going to be expanded here in Norwalk, which is a wonderful municipality, as far as I can see.”

The BET approved a $2,573 expense so Nigri can access private funding databases. She also said she’d accessed a Connecticut Council of Municipalities grant finder and tracker.

“I’m really looking forward to being able to help the city not only bring in more funding, but also to provide a series of reports periodically that allow the Committees and the City to understand where they are with their grants and what information they will need in order to be able to plan for the future,” she said.

“We now have 93 weeks that we’ve looked at, starting with March of 20 when COVID started, and we’re up 4.4%. Which kind of makes sense based on the tax rates and what we’ve done. So knock on wood that’s holding up nicely,” Dachowitz said.

Dachowitz said that opinion comes from his weekly review of cash flow numbers.