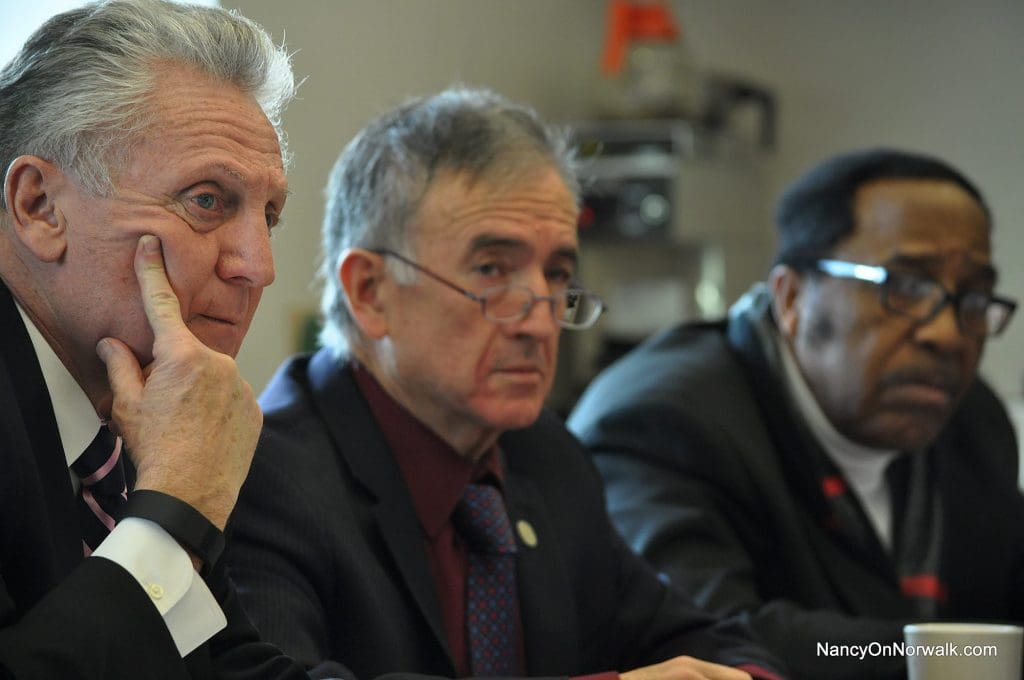 NORWALK, Conn. – More than 500 would-be Norwalk firefighters will take oral exams in February, members of the Fire Commission were told Tuesday, in a briefing on the ensuing logistical problems.

The discussion of the latest recruitment effort also touched on awarding points for residency, an idea that was discarded.

“We are obviously being a lot more inclusive in the oral exam than we have been in the past,” Personnel Director Emmet Hibson said to the Commission, in explaining that 501 firefighter candidates will get oral interviews in the week beginning Feb. 8.

“We have kind of broadened those who are having an opportunity to get the job,” Hibson said.

The Commission, responding last year to complaints that not enough minorities become Norwalk firefighters, changed the cut-off point for the written exam given to recruits. Instead of needing a 92 to “pass” the test and move on to the oral interview, Norwalk is choosing what it calls a “reasonable number” of top scorers, Hibson said.

“I believe the ‘cut score’ is somewhere around an 85,” Hibson said.

There was a tie, so instead of 500 candidates there are 501, he said. According to the minutes of the December meeting, 987 candidates took the written exam.

The word “fail” had been used in previous years in notices to candidates who didn’t score high enough, Hibson said.

“I didn’t say, ‘You failed the exam,’ because quite frankly 84 isn’t necessarily a failure, it just wasn’t a high enough number to get invited to the oral exams,” Hibson said.

“Quite frankly, the consultants were told to expect upwards of 600, but it’s a lot of people, a lot of people getting pushed through in a short period of time. I believe we have a one-week period of time. … We are trying to get scores out by Feb. 25 to those that are signed up for the CPAT (Candidate Physical Ability Test),” Hibson said.

Mayor Harry Rilling asked about the panels that will interview the candidates.

There will be 10 panels, with two firefighters from other communities, Hibson said, but the complication is that IO Solutions, the consultant involved, wants to make sure the panels are as equal as possible.

Getting people to participate on a panel for the entire week is challenging, he said. Norwalk will “pay a higher honorarium than we wanted to pay”;  the drive to get a Human Resources person on each panel did not work out, he said.

“Most of the towns in this area don’ t have HR departments large enough so they can lose somebody for the entire week. So IO Solutions spent time trying to find individuals. We told them to stay away from a couple of towns. … We don’t want people who either knew these individuals to be rating them again, and have some bias in that regard,” Hibson said.

Rilling asked about training the panels.

Oral exams will begin at about 2:30 p.m. on the first day because the panels would get trained first, Hibson said.

The interviews will be held at the St. Philip Roman Catholic Church school, Hibson said, adding, “They are charging but much less than a hotel or conference center.”

Potential residency points were discussed in December, according to the meeting minutes. In the last two tests, candidates were given 5 points for living within 25 miles of the city limits, Fire Chief Lawrence Reilly is quoted as saying.

Rilling said Tuesday said he was worried about unequal treatment.

“When you give information initially regarding the testing process it needs to be complete and make them aware,” Rilling said. “Some people (who) live out of town may then, if they didn’t realize residency points going in, they could potentially say now … ‘after the fact you’re treating me differently than you’re treating other candidates.’”

“We have probably been fortunate in the past, perhaps,” Rilling said. “The way I look at it, you go in with a good faith understanding that everything is equal at that point, but then you find out you’re going in 2 or 3 points, or 5 points below some of the other candidates. It might create a problem.”

“I don’t think it will help us at all in the scoring module,” Hibson said. “ … I don’t think the Commission should vote to give residency points.”

There you have it: Lower standards.