NORWALK, Conn. — Norwalk’s business community received between $180 to $348 million in the first round of the Paycheck Protection Program (PPP), according to data released by the Small Business Association on July 6. Of this, $62 million was in loans under $150,000.

The biggest loans went to chemical manufacturer R.T. Vanderbilt Holding Company and to Merritt Hospitality – loan amounts somewhere between $5 million and $10 million. More specific dollar amounts are not available for loans over $150,000.

Because this data for larger loans is only reported in ranges, it’s virtually impossible to come up with an exact amount of total loans.

The government is now discussing forgiving all loans under $150,000. Although many small businesses were shut out of the program initially, it has been extended until August 8. 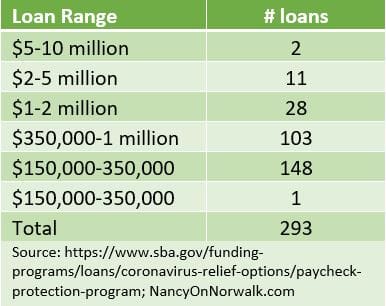 Both the Vanderbilt and Merritt Hospitality loans were generated by generated by J.P. Morgan. The 293 higher-tiered loans were extended by 51 different banking institutions, with 14 banks accounting for 82% of the loans: 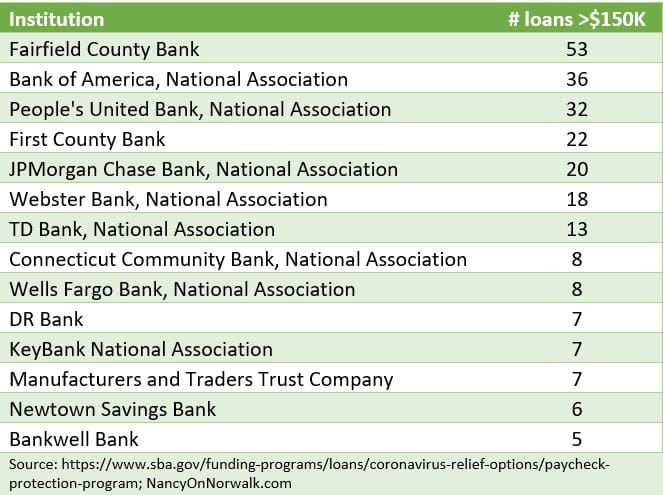 PPP loans under $150K – bakeries and restaurants lead the charge

Data reported in this category does not include business name but does list the loan amount. Roughly one third of the smaller loans were extended by three banks: Bank of America (219 loans) People’s United (194 loans) and Fairfield County Bank (192 loans.) Webster Bank, JP Morgan Chase, First County, and Wells Fargo each wrote more than 100 loans for Norwalk small businesses.

Retail bakeries, restaurants, and dentists fared well, both in terms of the number of loans extended and the total amount given out per business category. Beauty salons – 19 in all, accounted for $342,300.67. Perhaps the most unique NAICS classification was a business in the Toilet Preparation Manufacturing industry, which was awarded a loan for $127,200.

Click here for a complete list of loans by NAICS category. Note that these classifications are assigned by the applicants themselves; one hundred of the applications did not include this information.

Wait, what exactly are PPP loans for?

According to the Small Business Association website, “The Paycheck Protection Program is a loan designed to provide a direct incentive for small businesses to keep their workers on the payroll.  SBA will forgive loans if all employee retention criteria are met, and the funds are used for eligible expenses.”

Applications include information about how many employees will be retained because of the loan. In our next installment, Nancy On Norwalk will take a look at the number of jobs that Norwalk businesses said they were able to protect thanks to the PPP program.

In reading some of the names, I question whether they needed these funds.. In fact some of these businesses have boomed over the past few months. To those who needed the funds, I hope the program helped. To those who took advantage of the program for greedy purposes, Karma has a way of correcting the imbalances in the universe.
Which brings me to today’s Great American of the Day:
I am going in a different direction today based on some of the businesses that took advantage of this program and didn’t need too..Today’s American hero is the slick Willie Sutton. Probably one of the Greatest Bank Robbers in US History. We’re not proud of Willie, but he was very good at his craft.

This will go down as the largest financial fraud in American history.
Politicians on both sides of the isle used it to buy votes.
Look at the statewide list…it should make you sick. Hedge funds. Churches. Charitable organizations. Charter schools.Libraries.
Few if any jobs were created and,worse,few were protected.
The rich got richer. The poor…well,your $600 “bonus” goes away in a few days.
Mnuchin-Trump or Bernie Madoff. Take your pick.