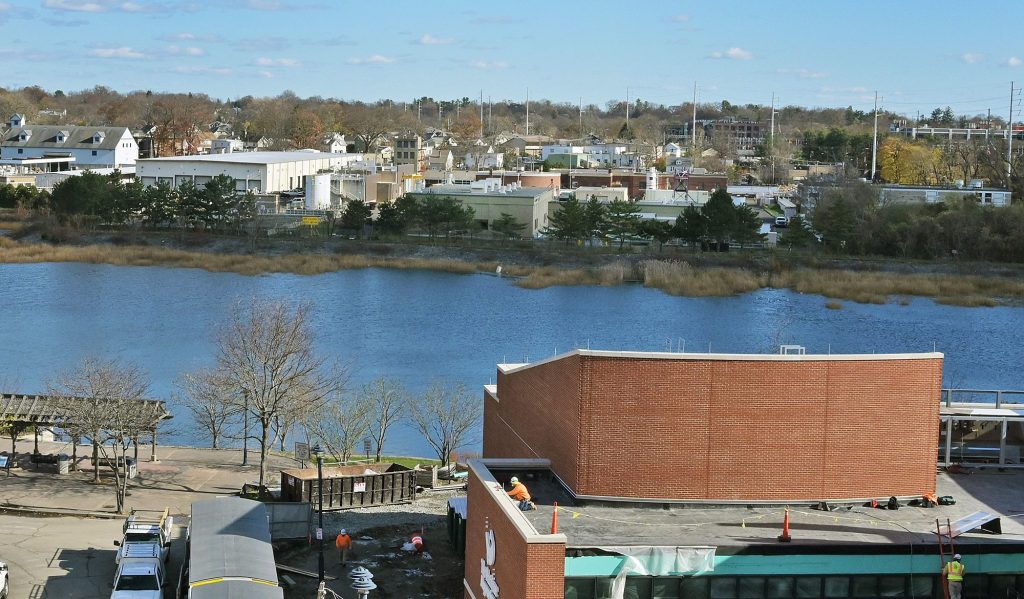 A view of the Department of Public Works and the wastewater treatment plant. (Harold F. Cobin)

NORWALK, Conn. — Some water-related information for you:

Gallons of sewage per person

“The average person disposes of 140.2 gallons of water per day that enters a sewage treatment plant,” as a rough average, factoring in everything, he said during the Committee’s Nov. 5 meeting. He based that on three years of data showing the plant averaging 12.6 million gallons, and dividing that by the city’s population, he said.

Looking at the census and figuring New Yorkers are coming into the area, you can extrapolate how many people the sewage treatment plant theoretically can handle, said Schnierlein.

This wouldn’t factor in out-of-towners working or shopping in Norwalk.

It’s an issue because Norwalk is seeking to renew its NPDES (U.S. EPA National Pollutant Discharge Elimination System) permit. Although the public comment period has ended, Save the Sound submitted a petition to force a public hearing, Committee members Diane Lauricella and Dick Harris said.

“That’s a significant thing, because then in the public hearing would have the opportunity to ask these questions in a public forum,” Coastal Area Planning Consultant Geoff Steadman said.

You might think that a coastal city could meet its water demands by installing a desalination plant.

There is no practical way to use water from the Sound for drinking purposes and it would be difficult to get a permit to build such a plant, Huth said to the Common Council Health and Public Safety Committee.

“I know people have discussed it because we’re a waterfront town,” Huth said. “But I think if you did a little bit of research into the practicalities of a desalination plant, it would quickly become apparent that it’s completely not an option.”

When you take the salt out of the water you need a place to put it, and it cannot simply be put back into Long Island Sound, he explained.

“It is a very costly endeavor. And there’s not very many desalination plants in the country. I think they built a fairly large one in California – it costs fortune to operate,” he said.

“That’s exactly right,” Council member George Tsiranides (D-District D) said. “…We did look into it briefly. But after finding out the costs, and what’s going to be involved, we kind of hit the brakes on the project and it hasn’t gone any further.”

The Fire Department pays rent on fire hydrants and the Second Taxing District is upping the price, from $84 each to $200 each, Norwalk Fire Chief Gino Gatto said in September.

“Every municipality rents their hydrants, it’s just the way it is,” he said. “…They want to stay in line with the other water companies. So they’re not quite as expensive as Aquarion. But they want to be in line, the First District and the Second District want to be aligned together now. And the finance director is not happy with it, to say the least.”

Chief Financial Officer Henry Dachowitz didn’t respond to an email asking how much this will cost the city.

Huth said the “rent” is referred to as hydrant fees, and yes, they’re going up.

“Hydrant fees have not been raised in many years and were not representative of current costs, these fees cover the cost of ongoing maintenance or replacement of hydrants when necessary,” Huth explained in an email. “SNEW raised its fees to match those of First District, and these fees are about 25% less than most other utilities in our area charge neighboring Cities and Towns. SNEW responds promptly whenever we learn of a damaged or broken hydrant.”

Norwalk is a growing city with a lot more to come, we need our water and sewage systems to work, and be able to handle the growth. Infrastructure… https://www.cpexecutive.com/post/growing-cities-and-infrastructure-challenges/

Am I missing something? I just did the math. At approximately 140 gallons per person per day usage and and 18,000,000 gallon per day capacity – doesn’t that mean the system could support a population of 128,000? Is anyone predicting a 43% increase in Norwalk’s population from “New Yorkers”? Give me a break.

Water, sewage and traffic constraints with more projects to come.. An inordinate amount of construction on the roads in Norwalk these days.