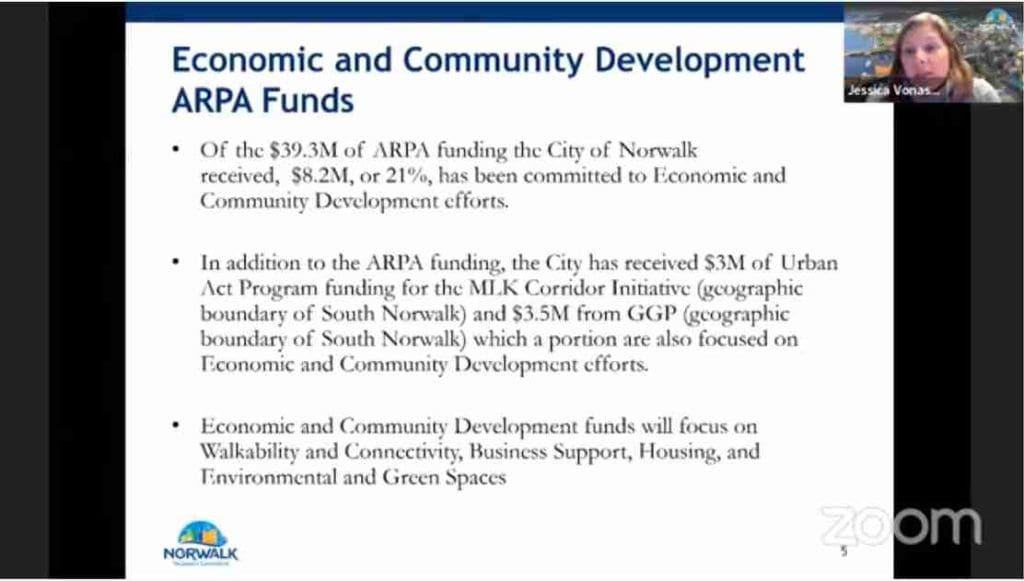 NORWALK, Conn. – There’s triumph on one side of the equation and contention on another as Norwalk proceeds to divvy up its American Rescue Plan Act funds.

The Common Council on Tuesday approved $20 million in spending on roads, flooding mitigation and other infrastructure improvements. But a Council Committee deadlocked last week on how to distribute $1.5 million to nonprofits, as some members felt small grassroots organizations weren’t given a fair shake.

The federal American Rescue Plan Act (ARPA) is “a $1.9 trillion coronavirus rescue package designed to facilitate the United States’ recovery from the devastating economic and health effects of the COVID-19 pandemic,” Investopedia states.

“The great thing about ARPA is that this is really a unique opportunity for all the municipalities, I would say across the country, in the sense of being able to receive such a large amount of funds at one given time. The city is going to receive $39.3 million ARPA funds,” Norwalk Chief of Economic and Community Development Jessica Vonashek said Tuesday. “We’ve received 50% of that already and the 50% will be coming very shortly for the rest of the funds; and $8.2 million or 21% has been committed to economic community development.”

In addition to the ARPA funds, Norwalk has $3.5 million stemming from the approval process for The SoNo Collection, as GGP (General Growth Properties) forked over that money in exchange for being allowed not to build a hotel with its mall, Vonashek pointed out. Norwalk also has $3 million from the Department of Economic and Community Development (DECD) Martin Luther King Corridor Initiative.

Those other funds are also being focused on economic community development, adding to the $3.4 million in ARPA funding, she said as she laid out $8,178,750 in projects:

She described the South Norwalk sidewalks are a new addition as the City looks to build a neighborhood school there on an undisclosed location. It also includes “a little bit” of retaining wall work and drainage work.

The $1.3 million for “modernization support of business” involves working with a vendor and contractor to develop a business navigation tool to help newcomers understand “what is required for permitting and licensing, what the cost is and what the zoning” via an online portal, Vonashek said. It will also “help to alleviate staff resources.”

Norwalk will get its long-desired online permitting and licensing as another contractor/vendor combo implements software, she said. “The homeowner or the business would no longer have to carry their paperwork from place to place.”

Digitization will transform nearly 150,000 pieces of paper stored in City Hall’s basement, even transcribing the text, she said. And a permit coordinator, already in this year’s operation budget, will instead be paid for by ARPA funds for three years.

“This would be our project manager for being able to implement the business navigation tool and also online permitting and licensing,” Vonashek said. “But they would also be the touch point at the city for businesses coming to the city, looking for information on what is required and what’s not required. And they would actually help to shepherd the process. So that job will be evolving over time.”

The Greater Norwalk Chamber of Commerce and the Norwalk Redevelopment Agency are collaborating on the Business Development Center, Vonashek said.

An economic impact analysis for the Maritime Aquarium will “put them on a platform where they are competitive and eligible for different programs that address environmental sustainability and resiliency,” she said. And the Harbor Use Plan will focus on the harbor’s health and balance its uses now and in the future.

The TMP project manager is a three-year contract position and the $405,000 includes benefits. It won’t hit the operating budget. The hire will help implement Complete Streets and Vision Zero work, the sidewalks that have been mentioned and other infrastructure work, she said.

COVID-19 assistance grants are already underway, as there are three rounds of funding that began in November, Vonashek said.

Other ARPA funding projects went unheralded at Tuesday’s Council meeting. Among the items unanimously approved were $9,759,820 for various Department of Public Works improvement projects, including flooding mitigation and tree planting, and $2 million “to address ongoing public health needs.” Those were on the “consent calendar,” meaning, approved without comment.

“This is not the end, but the beginning of how we will be utilizing the $39 million across the city for some really fantastic projects,” Finance Committee Chairman Greg Burnett (D-At Large) said. “Each and every project will be tracked as required by the federal government.”

Nora Niedzielski-Eichner (D-At Large) pointed out that many projects have been “on the backburner and the wish list.”

“Without these ARPA funds, a lot of this would not be possible, just point blank. So we are really lucky to have the representation we have,” Goldstein said.

Multiple Council members praised Vonashek and her team for the work that went into deciding where the funds would go.

‘My mind is blown’

Last week’s Community Services Committee meeting was not as tranquil: Norwalk Chief of Social Services Lamond Daniels was forced to defend the proposed beneficiaries of $1.5 million in funding for nonprofits.

Dajuan Wiggins, one of several citizens speaking to the committee, founded the Youth Business Initiative in 2020. Several organizations formed a collaborative in seeking ARPA money, following City advice, but were denied, he said.

They were told their budget was too high, so it was cut from $400,000 to $180,000, to serve 70 to 100 students in a year, he said, commenting that ARPA funds are aimed at those affected by COVID and that’s typically Black and brown communities.

Tristan Fields said he’s lived here 11 years and “when I talk to the kids, they feel like Norwalk does not invest in them, and it impacts how they perform in school and how they perform, you know, just motivated to work outside.”

“There continues to be a disconnect between the good intentions of City Hall and the people that need help in South Norwalk and lower income, minority communities around the city,” Jalin Sead said.

Daniels went through a lengthy presentation about how the funding was decided upon and announced proposed grants, all to established organizations such as Norwalk ACTS, Person to Person (P2P) and Steppingstones Museum for Children. The Norwalk Community Health Center would get $105,000 and The Housing Collective, formerly Supportive Housing Works, Inc, would get $160,500.

It was a “highly competitive process,” and “the amount we weren’t able to fund was about $2.5 million,” he said. “We had to make some very tough decisions. Specifically, we didn’t have an extra million dollars to fund all applicants. So that was a very, very tough task.”

The reception to his detailed explanation was criticism.

“My mind is blown … I’m so concerned about the list that was presented right now. It’s ridiculous. And I truly, truly hope that our community speaks out on this,” said Council member Diana Révolus (D-District B). The people denied are working with families and communities yet they “are not being looked at, not being heard, not being addressed, not being funded. And we literally just looked right past them.”

“I stand by the process. What I will also say is that this our program was not designed for startups,” Daniels replied.

Organizations need to show fiscal management via three years of statements to be considered, he said.

Council member Thomas Keegan (R-District D) said he heard the citizens’ comments as “a cry for help,” a request for guidance in “navigating the system so that they can get the proper funding for the programs that they’re most proud of.”

Committee Chairwoman Dominique Johnson (D-At Large) said she was “putting my nonprofit professional hat” and thinking about how “this is a rather intense problem all over the country.”

The Committee voted 3-3-0 on Daniels proposal. A second vote, after Daniels offered more detail about how the organizations were evaluated, come up with the same results.

The Committee plans to meet again May 11 for another vote, after reviewing more information.

“I want to know, what are we going to do for those that didn’t get funded? Because I think that there are probably a number of groups that that may be should be considered for additional funding,” Keegan said.

“I wonder if as a committee, we together can make a commitment to, you know, highlight some of these smaller nonprofits,” Smyth said. She suggested “reaching out to the state, our state delegation, which is very strong in Hartford, for some help, perhaps.”

What about the ARPA $ being allocated to wealthy taxpayers!!!

Really? $20 Million dollars of money ear marked for our most vulnerable resident’s is going to wealthy property owners? These are resident’s who were able to work remotely throughout the pandemic.

These allocations subsidize high value luxury property owners, income generating landlords and commercial property owners. Despite the tax relief, landlords are increasing rents with the “inflation” argument. These increases hurt the front-line service workers on whom we so desperately depend.

It is also disconcerting that these allocations are very hard to find in any City documents or Council discussions.

There priorities are ass backward. They pay planned parenthood in the name of healthcare. They have destroyed the lobster industry, the fishing, the oysters and these are food sources. They crush cement in the 140 and there is a cancer cluster during a plandemic. They force a vaccine, that is a weapon. They spend and spend until they ruin the currency and they line their own pockets taking OXY bribes and then there is 5G. The Norwlak Home Depot tested at 1866rf radiation next to the potting soil. Blumenthal took 17 bribes. $60,000 from Charter Communications to force another attack on the Citizens all for personal gain. Himes created the Russian Collusion Hoax according to James Comey from Westport who framed a sitting president. These are crimes against humanity.