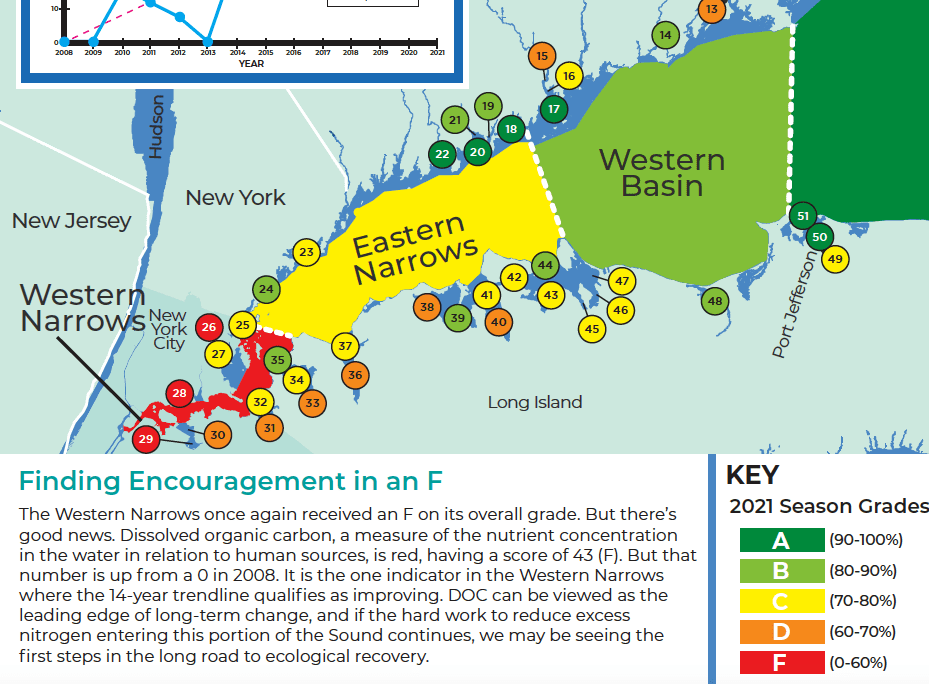 A graphic from the Save the Sound Long Island Sound Report Card. Numbers 15, 16 and 17 represent Norwalk Harbor.

NORWALK, Conn. — Norwalk’s Inner Harbor got a “D-” rating on environmental group Save the Sound’s 2021 Report Card, up from an “F” in 2020 thanks to better seaweed levels. Conversely, the Middle Harbor’s unfavorable seaweed levels caused a drop from “B-” to “C+” despite improved dissolved oxygen levels.

Save the Sound, which releases a printed report card every two years according to its Water Quality Director Peter Linderoth, is gathering information on trend lines, and expects to have enough data to report five years of information in its next release.  “While we look at year to year variability, there’s so many things that could pop into play,” Linderoth said. “… What I’ve noticed with this type of work, not just the Norwalk, but really anywhere, it could go either way. Next time, it could go back to an F, (or) it could potentially go to a C.”

“The City of Norwalk has been and continues to be a careful and active steward of environmental resources in the Norwalk River and Long Island Sound. Just as in the past, the City will consider the results of all local water quality assessments and continue its dedication to developing and implementing strong initiatives that enhance water quality across all aspects of its operations,” said Chief of Operations and Public Works Vanessa Valadares. 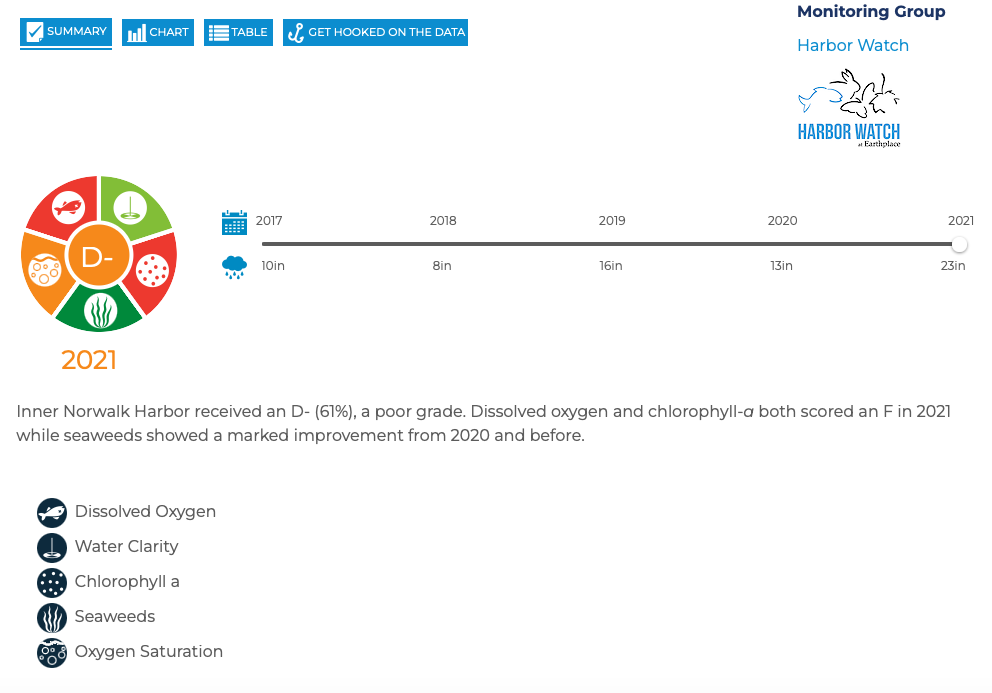 Linderoth said he believes the City has accomplished “a fairly large stormwater reduction” but the Inner Harbor has a “few obvious stressors.” Treated effluent contains nitrogen and it’s released from the wastewater treatment plant into a “very restricted portion of the harbor.”

Addressing that wouldn’t be like turning a “light switch” on or off, and it could be a significant investment to fix, he said.

Furthermore, there’s obviously many impervious surfaces around the harbor, developed land with concrete and asphalt roofs, and “that’s known to have an impact on water quality.” If Norwalk continues to focus on reducing the amount of stormwater entering the Inner Harbor, then the results should improve.

“Also the Norwalk River is a very large river. And it’s going to be bringing pollutants from its entire watershed,” he said. Fertilizers could be coming from outside the city, but people need to be encouraged to use organic options and landscapers need to be educated on how often fertilizing is really necessary. “Usually two applications (a year) are plenty.”

He also said fallen leaves can easily be mowed back into grass and mulched to become a natural fertilizer for the next season. 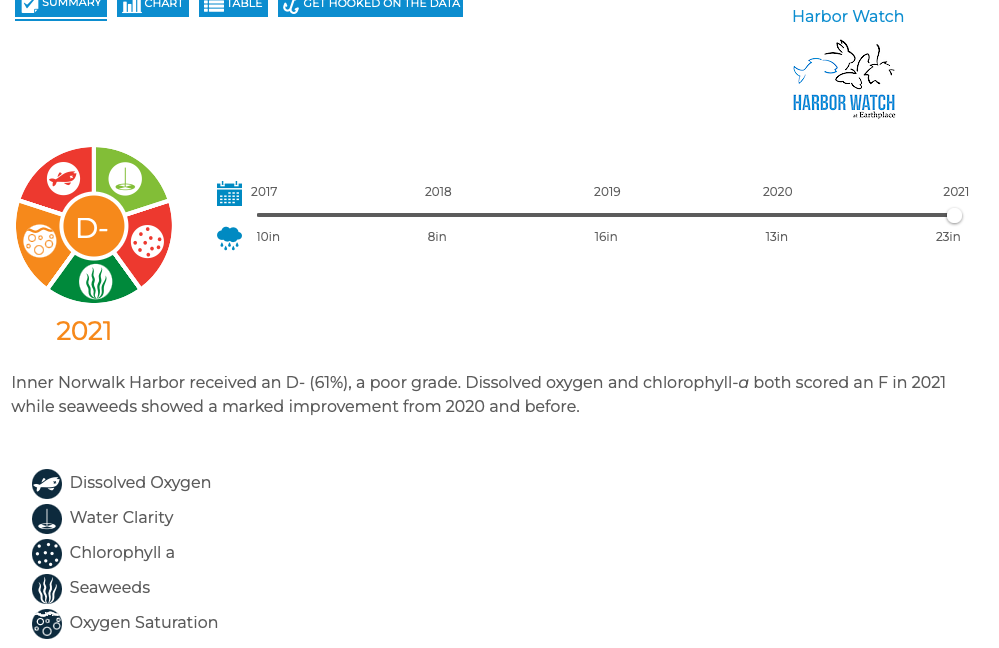 Bill Lucey, the organization’s Long Island Soundkeeper, said he’s heard the City is “inquiring about forming a stormwater authority which would help a lot of pollution issues by funding more bioswales, rain gardens, etc. to capture polluted runoff.  So while they have a ways to go there is some signs of progress.”

“We are at a preliminary stage of looking into whether it would make sense for Norwalk,” Norwalk Chief of Staff Laoise King said.

The Mayor’s Water Quality Committee will discuss the report with the Save the Sound team Thursday evening.

In addition, he said, “what must be considered is the impact of a lack of flow from the Norwalk River as well as the absence of rain and the heat this summer.  There are so many variables that can affect water chemistry it cannot be blamed on the algae.”

He continued, “Save the Sound scientists have stated in the past that they expect clearer water.  This is an estuary, and clear water is not productive for shellfish and contain less plankton which feed the shellfish.”

Schnierlein, who was once a high school biology teacher, said he has “a problem with a report card that issues grades after the fact, without any input from ANY ORGANIZATION through the period of time that there is a problem in a certain area, and then what you need to correct it.”

He nonetheless echoed Linderoff on some aspects, though, saying “Water and air temperature, storm drains, water runoff or lack of it, impervious surfaces, sewage treatment plants, fertilizers, and what comes into the harbor from the Sound or down the River, schools of fish all impact what they are looking at.”

Linderoff said Save the Sound is looking forward to Thursday’s discussion, hoping to focus on “how we work together to improve the water quality in the Inner Norwalk Harbor.”

Who knew the drought would have one positive side effect. Thankfully we’ve learned that 30,000 new toilets or the 20,000 planned ones have no impact whatsoever. More flushes is better for the river. Full Stop.

If we outlaw gas powered leaf blowers that grade will go from a D- to a solid D in a few years.

Thank you for this well done article. I hope we All are concerned for seeing our our river, Harbor and sound become a healthier environment for all🌎🐠👍🏼

And the response from our Mayor is? CRICKETS. oh wait, He has a chief of staff that can answer for him! Can you imagine that we pay someone $150,000 a year to make comments for our mayor? We must have some large pot of money in Norwalk. Only mayor to ever have one. Anyone with a boat can see the water is totally brown in the inner harbor. Curious if that color is synomous with raw sewage? Only in Norwalk is the grade of “D” acceptable!

Over the past 2 years I got to see Norwalk Harbor Management commission, shellfish commission, and the mayors water management committee, DPW, and health department in action as it relates to an unfounded complaint by a resident of potential pollution and water quality concerns in Wilson cove

My personal observations are

– the commissions are well meaning, however, they do not have a working knowledge of the existing storm water system and ALL major storm water outflows, and both DPW and the Norwalk Water pollution control authority are not active participants in monthly meetings.
– the lack of knowledge leads the commissions to go down one rabbit hole after another. Some committee members have been unprofessional.
– there is NO active plan to monitor all storm water outflows for anything other than bacteria

– the cities paid staff are very professional. However, the approach to water quality is inconsistent. The Health department primarily monitors our beaches. Water testing is outsourced to Harbor Watch, and is bacterial testing only.

– one of the largest sources of position is bacteria ( E. coli) ) And comes from dog poop that doesn’t get picked up and washes into our storm water and deposited in long island sound
– Nitrogen, pesticides and herbicides come from resident lawns

There Needs to be a city wide effective, Persistent, program to teach the community how their actions ( or inaction) ( pick up after your dog, green gardening, etc) impact water quality.

There needs to be a more aggressive program to test all outflows on a monthly basis, clean all catch basins on a scheduled frequency, and have a dedicated DPW crew to investigate point sources.

If the city takes these proactive measures- water quality can improve. Without it- nothing will change.