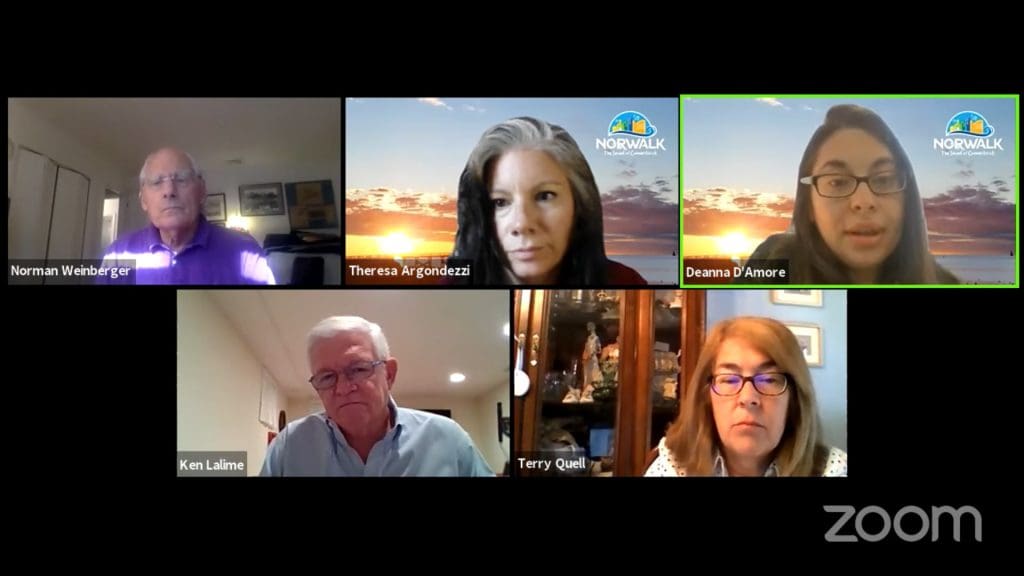 The Norwalk Board of Health holds a meeting, Tuesday on Zoom.

NORWALK, Conn. – Public health is “all about creating the opportunities for people to be healthy… But we don’t talk about racism that much,” and its impact on health, Norwalk Director of Health Deanna D’Amore said Tuesday.

“I’m asking, you know, to talk about this more and just ask you what you think we could be doing more and push me to do more,” D’Amore said to the Board of Health, inspiring thoughtful reflection and a prediction from Norwalk Chief of Social Services Lamond Daniels.

“We are preparing to make some significant announcements of, kind of ‘what does this look like in Norwalk.’ Because we do believe these are some defining moments in our community, and so stay tuned tomorrow,” Daniels said.

“I think we’re in a new era around how we do work and how we work and relate to communities,” Daniels said. “… It will be a larger city approach to how we look at these issues in a real way.”

“The health department has really made a commitment to health equity and to look at the social determinants of health, into improve the health status for all our members of the community,” D’Amore said, asking Board members to “think about structural and institutional racism.”

“One of the biggest things that we try to do to address health inequity is to address the social determinants of health,” Health Educator Theresa Argondezzi said. The Health Department works to provide food access, safe housing and data, but, “Are we addressing some of the community barriers that that are keeping people from following certain health recommendations?… Racism really is the driving force behind the inequities in those social determinants.”

D’Amore spoke of “recruiting staff and partners who reflect our diverse community,” and promoting “anti-racism amongst our staff.”

“It’s a really important step because it is engaging people in a process that they feel they have a little bit of control over,” he said. “And everything else we all do, I think is very difficult. We don’t have a lot of control over a lot of aspects of what we all do. So I did that, as well, that has worked very well for us as a company.”

“We could also go back to our mission statement and philosophy that we do every couple of years,” said Board member Terry Quell, Ph.D., R.N. D’Amore thought that a good idea.

Lamine suggested making a statement like that part of the accreditation process.

“The hardest part of all these social things that we’re talking about, no matter what time in history, you look at it, it’s how does it become sustainable? I mean, this has been going on for hundreds of years,” he said.

“Part of the issue is these are policies that end up being political issues,” Dr. Norman Weinberger said. “And I think we as a health organization, have to put that up in front. people have to understand … Zoning is a political issue, and it affects people’s lives. And I think that’s a health issue.”

“I feel like we’re a bit ahead of the curve… we do do a lot of work in the community, not only the health department, but the police department has community policing and lots of other agencies really reach out,” Quell said.

D’Amore said it was “really exciting” that the City created a Community Services Department.

“There’s definitely great things that are happening. But I come from a position of there’s always room for improvement,” Daniels said. “…What I’ve learned  oandbserved here in Norwalk is perception. I think we can all agree people’s perception is based on their reality. So how do we how do we engage the community in an authentic way so that we know we’re doing a good job, but for some reason, there’s a disconnect. They don’t see it that way.”

“I’ve been fortunate,” Daniels said. “When we were doing a lot of the food work, we walked in a couple of communities in Norwalk and you do get a different perspective, when you’re walking in, you’re talking to residents in their neighborhoods on their porch, saying ‘Hi.’ So I think we can continue to find those opportunities to really engage not necessarily in our buildings but where they live. I think we’ll learn a lot more of how to even strengthen the good work that was already doing.”

When determining future reforms it should be a good idea to understand our city is getting practically ZERO from the State of Connecticut. Why is that? Is it because our state is broke? Is it because our locally elected state officials seem to care more about other communities in CT? 53% of Norwalk’s budget is for education. We get crapola from Hartford. Anyone who thinks we get our fair share from Hartford is a fool. Every one of thsee health reforms will cost money..What tree will that money be coming from?

@John O’Neill. I heard DPW is going to have one of the 3 guys stationed at the lawn dump plant money trees outside of City Hall. We will also need 2 police on hand to make sure traffic flows smoothly.

I am old that’s why I practice social distancing, and in the last two days the people who were on top of me which ever direction I moved. Were some of the people mentioned in the article.

They could start by recruiting a POC onto the board.