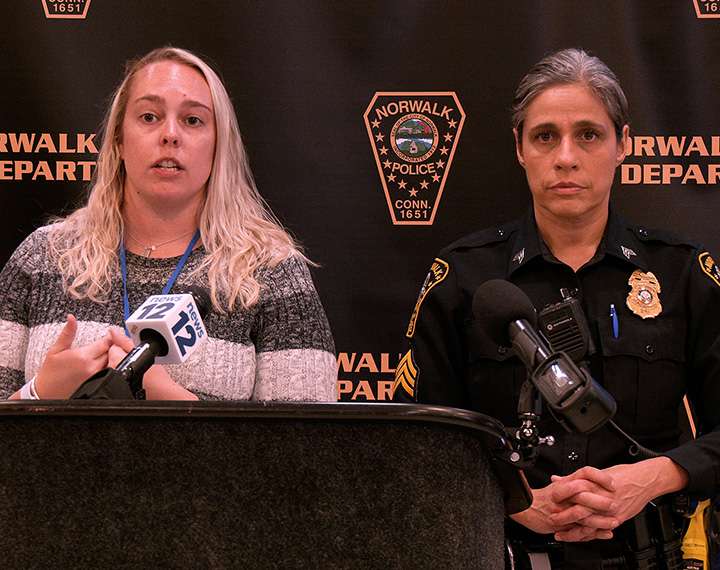 NORWALK, Conn. — Alexandra Fitzner has reached out to 25 people in her initial 17 days as Norwalk’s first clinician embedded with the police department, officials said Thursday.

Fitzner is working nine to five, hours that overlap with two police department shifts, to follow up on referrals from patrol officers and connect people with aftercare, said Sgt. Sofia Gulino of the Community Police Services Division. It’s “already a long list” and “it’s been very busy to say the least.”

In July, the Common Council awarded Recovery Network of Programs (RNP) a $216,000 contract to emulate services that Norwalk Police Chief Thomas Kulhawik said have been highly successful in Stamford. Funded by federal American Rescue Plan Act (ARPA) money, RNP, a non-profit behavioral healthcare organization that has been serving Fairfield County for 50 years, was expected to provide bilingual social workers – one full-time and one part-time – to work with police.

Officers were dealing with emotionally disturbed people (EDP) and, “Sometimes, the results were tragic,” Mayor Harry Rilling said at a Thursday news conference.

With the pandemic, there was a spike in problems “where people were just frustrated, very isolated, and so forth,” said Rilling, former Norwalk Police Chief. “Many people in the community and nationwide called for leaders to find new ways to better address equity and enhance community police relations. And that’s what this is all about. …We know in Norwalk, the community and the police work very, very well together. But we want to find better ways of enhancing that.”

Rilling noted that years ago Norwalk had a state-run social services agency but that was eliminated. His administration created a community services division and hired Lamond Daniels as the City’s first Chief of Social Services to help connect citizens with resources, he said.

“We piloted this program initially with the Stamford Police Department and in our first year of operation, we’ve worked with 300 unique individuals, and have provided over 800 interventions and community connections to care while reducing call volume by 20%,” Kolakowski said. “We have no doubt that we will have the same positive outcomes in the city of Norwalk.”

Fitzner, the first clinician hired by RNP, is serving Norwalk as a contract worker and RNP is interviewing candidates for a part-time social worker, making bilingual skills a priority, Gulino said, referring to not only to Spanish language but also Norwalk’s “large Haitian population.”

In Fitzner’s first three weeks, “Officers have already been providing us with a lot of information and people that they wanted us to connect with. And it’s just been it’s so exciting to see how everybody has been welcoming this, not just from the police officers’ standpoint, but also the community standpoint,” Gulino said. It’s about “bridging needs.”

Gulino said that she and Fitzner had walked down the block to Person-to-Person’s facility just before the news conference, to assist in “an incident with a person that we’ve identified in our community as in needy. We assisted the officers and we’re able to bring that to a successful closure.”

The program attempts to address the problem of people being taken to Norwalk Hospital and cycling back out, over and over. Fitzner said she follows up with the hospital to see what resources the person has been connected with, asking what she can do to “make sure they’re getting connected with resources, outpatient wise, and that’s where my role is.”

Fitzner’s official hours are 9-5 but as she learns the role and the city, this may expand “in some ways,” she said. She isn’t going out with police but is following up.

The additional part-time social worker may help with extended hours, Kolakowski said. The program is developing and “it needs to be developed in tandem with what the needs are for the police department.”

“We want to expand our hours and have more people here and more feet on the ground doing it, responding to the calls for service,” like the call to P2P, Gulino said. “But for each person we’re connected to, there’s an entire family behind them that might need services.”

She said, “The majority of the situations that we are able to access and turn good are from the follow ups primarily because on scene when things are very critical and chaotic, a lot of people will not be open to it. When things are more calmed down, then we can actually look at what’s happening.”

Officers can still dial 211 and get a clinician from the Franklin S. Dubois Center in Stamford or the mobile crisis center when there’s a critical incident, Gulino said.

Fitzner can take the lead when the needs are in her area of expertise but Norwalk has a Youth Services Department and when there’s a child involved, “Alex can make that seamless handoff,” Daniels said.

“All too often, when you’re dealing with an EDP or a victim of domestic violence, once the intervention is over, there’s no follow up. And the follow up is critically important to make sure that people realize this is not just one time, ‘I’m going to be getting the support that I need,’” Rilling said.

“We have a model here in Norwalk that there’s no wrong door. And this approach basically means that whatever door you come through, our goal is to help you find the resources that best meet your needs,” Daniels said.

“Even though our officers are trained, they don’t have the professional training that a professional mental health professional… has,” Kulhawik said.

Officers take an eight-hour class in mental health first aid at the Police Academy and many are crisis intervention certified officers, Gulino said.

“There’s different degrees or levels of training. Alex comes to us with a degree which is years of experience which our officers don’t have access to,” Gulino said. “So they are trained to some degree, but to develop the partnerships and to spend time on the referrals and understanding the behind the scenes, you know diagnoses, that’s not something that officers are trained to do nor do we expect them to.”

She said, “Our purpose is to more look at the criminal side of things but there’s always it becomes more complicated when you have different types of victims and different people who are struggling with different disorders.”

Rilling said the City would monitor the efficacy of the program to see if the anticipated bang for the buck rings true.

“Obviously, this is a program that has such great potential. And if it can help people, if it can help reduce repeat calls for service … if it’s successful, we’d be foolish if we didn’t continue it and we think for there’s no reason we feel it will not be successful,” he said.

“One of the most important aspects of this program is going to be gathering data,” Gulino said. “I did pull statistics from approximately January 1 to July 1. And right now, I’ve identified approximately somewhere between 400-500 calls for service that did not get the type of follow up that Alex may be able to do.”

Those calls might include domestic violence, “a simple disturbance,” noise or “something more intense,” like a sexual assault,” Gulino said. “We’ve had, so far, a stolen car. We’ve had some arrests, situations, we’ve had an individual who stopped eating for several weeks because of a psychosis. So the catchment is very, very large.”

Kudos to Mayor Rilling and the Norwalk Police Department on instituting this critical new program. Outreach and extended aftercare is vital to helping those who are struggling with a variety of disorders that can’t be resolved with one “911” call.

This is EXCELLENT. Now we all can see what “de-fund the police” really looks like: it’s allocation of government resources to provide social services to people in need while reducing the burden previously imposed on police departments and health care providers to address social problems for which they are neither trained nor equipped. Congratulations to NPD Chief Kulhawik for adopting a successful program from a neighboring town to use in Norwalk. Last: the video at the end of this article is worth viewing (thank you, Harold Cobin!) — I, for one, have every confidence that Norwalk’s police department has the right skilled professionals to ensure this program is effective and its benefits are broadly shared throughout our community.

This is an amazing and needed initiative! Congratulations to the Mayor & Chief Kulhawik for moving forward with this program.

With the change in times and shift in the way in which people behave , it feels like “someone else’s pit bull is my car”
the police department in the way in which they handle their calls definitely needs to be completely re-engineered! as this additional service is much needed, it’s important that we all understand the police force needs more supports things have to be done differently…
For their safety! And the people!

Ya know they had something similar like this on Blue Bloods and amazingly what happened the Social Security Worker got severely injured and never came back. But as someone above commented this is exactly what the defund the police looks like. And now with Norwalk hiring a BLM activist as the DEI Director it will get even worse. More stupidity from the City

I agree, this is what ‘defund the police’ actually looks like. Allocating funds for real and meaningful action to help the police ‘serve and protect’. Great job NPD!