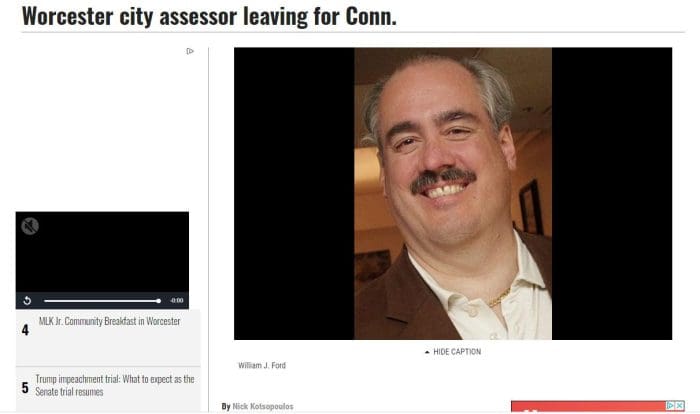 NORWALK, Conn. — Norwalk has a new tax assessor, who is experienced in Massachusetts and New York, not Connecticut.

William Ford began work Tuesday, although his appointment by Mayor Harry Rilling hasn’t been confirmed by the Common Council. Ford is a “provisional employee” and his four-year term won’t begin until the Council approves the appointment on Jan. 28, Norwalk Communications Manager Josh Morgan said.

The need for a new tax assessor is described as “urgent,” given that both Norwalk Tax Assessor Michael Stewart and Assistant Tax Assessor William O’Brien resigned in July. O’Brien’s last day was Aug. 9 and Stewart’s was Aug. 30.

Given the vacancies, the City obtained a one-month extension from the State for finalizing/filing its Oct. 1 Grand List, according to Corporation Counsel Mario Coppola, who wrote, “Therefore, the 2019 Grand List will get filed on or around February 28th… The deadline for filing applications to the Board of Assessment Appeals will be March 20, 2020.”

Ford has more than 20 years of municipal experience and has been City Assessor for Worcester, Mass., since 2009, according to his resume. Worcester is “an established community with a population of 180,000 people with assessed valuation of over $17 Billion that consists of approximately 48,000 real estate parcels, 5,000 personal property and 140,000 excise accounts,” it states.

“Mr. Ford will play a critical role in hiring a deputy assessor. He’ll also lean on current staff, as well as the local assessment community for guidance,” Morgan said Wednesday.

‘A few years’ to get certified in Connecticut

It’s universally stated that it’s difficult to find assessors in Connecticut. Chief Financial Officer Henry Dachowitz in September predicted that it would be acceptable to hire someone from out of state, though Attorney Adam Blank told NancyOnNorwalk that a non-Connecticut appraiser would face a “steep learning curve.”

Connecticut Association of Assessing Officers (CAAO) President Elect Thomas DeNoto said it would be difficult to make a specific interpretation about Ford’s hiring. But Worcester “is not an easy community to assess based on its wide variety of complex property uses,” he wrote. “CT statutes are comprehensive and can be a learned over a long duration.”

“I do not believe this is an impossible task,” DeNoto wrote. “The assessment community is here to help any assessor that works in this state as we all strive to be the professional best at our craft. It will take a few years for this person to achieve a CT assessment certification.”

CAAO Treasure Lawrence LaBarbera on Wednesday also expressed positive comments about the hire, from his “unique perspective” as Windsor assessor, former Hartford assessor, and a member of the Board of Assessors in Wilbraham, Mass., since 2002. Connecticut and Massachusetts are very similar, he said.

“I can tell you that Assessing/Appraising is the same,” LaBarbera wrote. “We value Real Property, Motor Vehicles and Personal Property in both states and have a multitude of exemptions that are very similar. There are a few nuances as to the qualifications for the exemptions, but otherwise they are basically the same. We both have Veterans, Elderly, Blind, Active Duty Military and various local options. We have periodic revaluations and certification results are submitted to a State entity. There are requirements for professional certification as well as continuing education.”

Blank, who estimates he spends half his professional life in assessment appeals, continued, “It obviously would be ideal if he had lots of Connecticut experience. But I know how very difficult it is to find assessors (I’m currently assisting Hamden in their search for a new assessor). Norwalk’s Assessor’s office is quite short-staffed and the new hire will have a learning curve so I would expect things to be a bit rocky in that office over the next year. But I’m an optimist and hope that he will settle in, get the office running smoothly and stick around for the long haul.”

“A good assessor or a good appraiser you can put anywhere, real estate appraiser Nora King wrote. “A lot of it is determined by skill set and the willingness to learn the area.”

King, who in September warned against hiring a “good old boy,” continued:

“Worcester is the second largest city in New England besides Boston.  I would hope that Norwalk is going to benefit from this knowledge.  We are a growing city and we can benefit from a person who has perhaps broader experience.   He had a fairly large budget in his past job and I believe a larger staff so I am hopeful he can bring some management experience to the team.   I think the biggest challenge will be learning how to appraise coastline/waterfront properties, but I am hoping he talks to a lot of Norwalkers and really get{s} to know the coastal areas.    Even though Worcester has bodies of water it does not have a coastline so I think that will be one of the largest challenges.  It is a tough job because no one likes paying taxes but with the right personality and the professional skill level it can be done.

“I am looking forward to meeting him and working with him in the future.”

Council in the dark?

“Mr. Ford’s appointment is provisional, as we are still completing the necessary background check and still need Council approval. The City was without a Tax Assessor for nearly five months, and it was imperative that he start as soon as possible,” Morgan wrote.

Rilling did not reply to an email from NancyOnNorwalk.

Common Council President Barbara Smyth (D-At Large), who is also chairwoman of the Personnel Committee, wrote, “William Ford’s appointment will be brought forth for approval of the Common Council at the January 28th meeting.  As with all of the Mayor’s appointments, Council Leadership will have the opportunity to meet with and question Mr. Ford prior to the vote.  There has been great urgency to fill this critical position as the city has been operating without a tax assessor for more than four months, so a provisional start date was created pending background checks and Council approval.”

This story was updated at 3 p.m. Wednesday to include additional information from Norwalk Communications Manager Josh Morgan.

It was updated at 4 p.m. to add an opinion from Windsor Assessor Lawrence LaBarbera.

Accurate Worcester Assessments on Real Estate
In 2011, when petitions regarding questionable property assessments were brought before the Worcester City Council and were ignored, it was recommended that a coalition be formed. And AWARE was created.
To really know the truth about Mr. Ford’s 10 years as the assessor in Worcester, MA. you should read the actual facts about Mr. Ford’s time in Worcester. You (Won’t) be very impressed. He was a terrible assessor here in Worcester, MA. and we provide the facts to back up that statement. You should seriously know those facts, backed up by Mass. DOR (Department of Revenue)investigations.

Isn’t there a personnel committee that would set up a sub-committee of sorts for a candidate search?

Could have approved an Interim person pending the search committee’s recommendations instead of being a vacancy for four months. Important positions elsewhere are handled this way.

The comment submitted by the AWARE Coalition of Worcester is not very encouraging. Hopefully the Personnel Committee and the Council will review it carefully before making this hire permanent, although the way things are done in Norwalk, I’m not so certain that that will happen.

Check AWARE’s website… For a group to be formed and put together a website full of information on Worcester’s tax assessment problems speaks volumes!

This appointment should go through the Personnel Committee before it hits the Council floor.

Worcester City Councilors seemed unsatisfied with City Assessor Bill Ford’s defense of his office’s recent evaluation of waterfront Worcester properties, calling for the matter to be referred to a subcommittee and offering advice to homeowners on challenging their property values.
View the link to this story at:
https://www.worcestermag.com/2017/01/26/sink-swim-value-waterfront-land-questioned