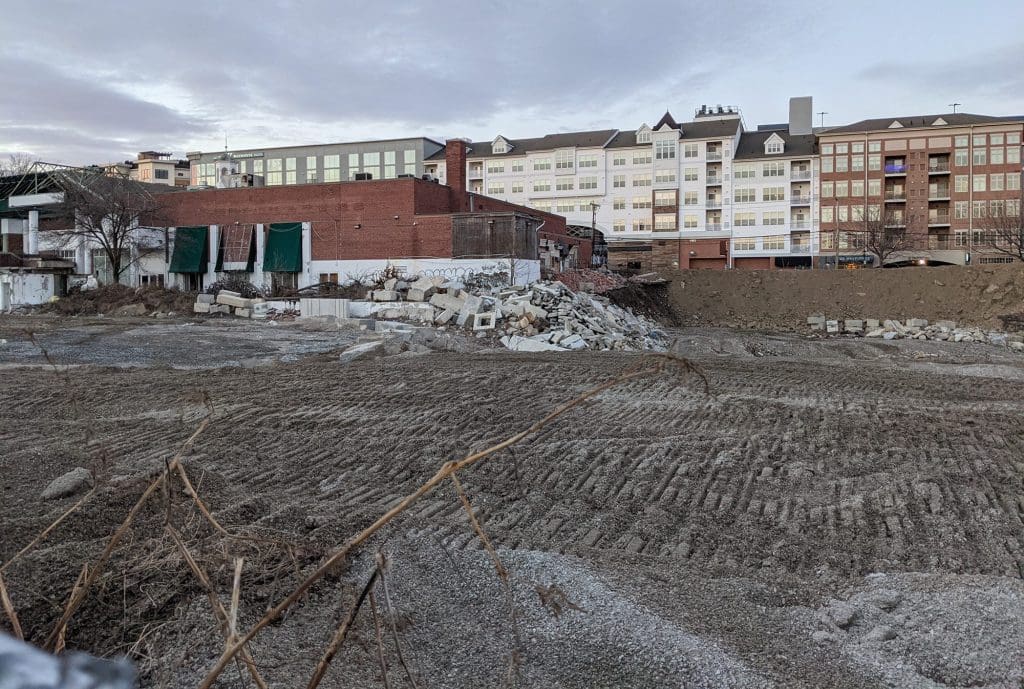 Waypointe, as seen Jan. 6 from the neighboring Pinnacle site.

NORWALK, Conn. — Waypointe is getting a $1.2 million refund from the City of Norwalk after challenging the property’s assessment in court.

They were told a similar ruling regarding Manresa Island was “coming up,” but that’s already out – a judge authorized a $13 million reduction in that property’s assessment Monday.

The $1.2 million claim from CP IV Waypointe BP I LLC was for 2016-18, Tax Collector Lisa Biagiarelli told the Council members. Ordinarily, claims from assessment appeals are minor and don’t require a Council vote, she said. But because the dollar amounts are high, the checks won’t go out without a Council vote, although they were approved by a Superior Court judge.

Council member David Heuvelman (D-District A) asked what would happen if the Council voted no.

The Law Department would probably contact the Council and express the urgency in approving the claim, Biagiarelli said, answering in the absence of Tax Assessor William Ford, whose late arrival was attributed to technical problems.

“The city would have a problem if we did not follow what the judge said to do, which was agreed to the settlement,” Biagiarelli said. “But we’ve never had a situation where the committee didn’t approve the settlement. We’ve had cases where it’s been delayed on where we needed to go back and get some more information and bring it to the committee.”

Ford explained the $25,719 refund stemmed from the sale of commercial condos, one before the valuation and others afterwards. “It was 26 separate condominium units,” he said. “So the individual units, they didn’t look at the sale prices closely.”

The refund is for the 2018-19 bills, Biagiarelli’s document shows.

Ford said little about the Waypointe issue. Court documents show that in April 2017 CPIV Waypointe BP I LLC filed an appeal on the assessment of three properties. Another appeal was filed in April 2019.

In November, Judge Daniel Klau approved a stipulation agreed upon by the parties:

Responding to the $1.2 million refund, Common Council member Thomas Keegan (R-District D) asked, “Can we expect any this big in the future?”

“We have a number of significant properties under appeal,” Ford replied. He mentioned Merritt 7, described it as having a $150 million value and said, “even a slight percentage change in value will result in a significant reduction.”

In November, an appeal filed by Merrit River Partners LLC on the assessment for 20 Glover Ave. was settled:

Manresa: no surprise there

“We have a number of very large appeals that are coming forward,” Ford said to Keegan during Thursday’s meeting. “Manresa Island, the abandoned power plants is another one that’s going to be coming up. So a number of different ones are coming up. We are negotiating them and trying to get the best value for the city.”

Norwalk Power LLC filed its appeal of the Manresa assessment in April 2019. On Monday, Judge Arnold Aronson approved a stipulation agreed upon by the parties:

The stipulation states that the overpayment shall be applied as a credit to the tax bill due this month. The City’s website shows the bill as $499,194.08.

Ford, in an email to NancyOnNorwalk after the Council meeting, said he hadn’t relayed that development to the Council members because, “We were waiting for the courts approval. It is in process now.”

“Assessors are skilled at doing jobs, but there can always be variances. For example, a defect on a home that cannot be seen, but can be proven in court, would change a property value. This happens on small properties and on large properties. It does not mean an assessor was mistaken. A great example is Manresa. We knew and expected an appeal and a change to the value. The unknown to us was the actual dollar amount, which is why we have reserves. When a property is evaluated, it is granted its full market value. It does not include any adjustments for environmental hazards or deterioration. These issues are up to the property owner to disclose and prove, and why we anticipated the appeal. We were prepared for this through conservative budgeting and forward-thinking.”

In early 2018, then-Norwalk Chief Financial Officer Bob Barron spoke of losing “millions of dollars in assessed values” due to assessment appeals. That included Manresa, as Norwalk Power LLC lowered the assessment by $9.8 million.

It’s widely known that the property is polluted with coal ash. A “shallow excavation” of part of the “island” would cost $31 million, Licensed Environmental Professional Lynn Willey said in May 2017. If you did the remediation on the rest of the known contaminated area, it could be an additional $29.5 million.

Demolishing the island’s power plant could be between $6-9 million, but that’s just an estimate based on a similar plant, he said.

Ford was hired in July 2019. Chief Financial Officer Henry Dachowitz reminded the Council that Ford came in after both Tax Assessor Michael Stewart and Assistant Tax Assessor William O’Brien left at once, and said Ford was “in a tough position, because we have a tremendous backlog of legal cases, among all the other work that had to be done by the office.”

He’s worked to clean it up and “there are some (appeals) where, upon review, we feel very strongly that we are in the right, and we will go to court if we have to,” Dachowitz said. “And then there are those in the middle. But we’re working through all the backlogs.”

In most cases, the adjustment is made to the next bill, “so from a cash flow point of view, we don’t get that immediate hit,” Dachowitz said.

The 2018 revaluation resulted in an unusually high number of tax assessment appeals. In September 2019, Morgan said 380 appeals have been filed with the Superior Court.

The budgets are formed with conservative tax collection rates and historically the actual collection comes in at a greater amount than planned for, Dachowitz said Thursday. He reminded the Council members that when COVID-19 hit, the not-quite-done budget was adjusted to lower the expected collection rate.

Norwalk Director of Management and Budgets Angela Fogel said, “We have a $3 million reserve built into the budget. It’s been $1.5 million, historically, but during the rebound, it was bumped up to $3 million in 2020. And it’s $3 million for 2021.”

Common Council member John Kydes (D-District C) asked if other successful appeals have drawn down from the $3 million.

“As I know, this is the largest. So they the others shouldn’t be material,” Fogel said.

Appeals are generally an issue within the first two years after a reval, so the changes should drop off, Dachowitz said.

She warned Council members that refunds affect the collection rate, as the numbers she reports are a “net collection.”

“You’ll see that levy will change over time because of corrections like court stipulations and other ads or deducts,” Biagiarelli said. “And also our levy actually went up between December and January because we added in the motor vehicle supplemental billing, which was two-point-something million dollars, so that levy does change.”

Regarding the choice of the word “unfazed” in the headline, Morgan said, “I do not want the public to think unfazed means indifferent. These are professionals who are good at their jobs and understand how the assessment process works and are able to plan conservatively to ensure the city has the revenue to meet its expenses, despite any appeals.”

I wish Mr. Ford Good Luck as 2018 had many errors. Maybe it’s the nature of the beast. I can tell readers I did an analysis of approx. 200 properties that sold during assessment period. When comparing assessed values vs actual sales values I found 15% properties were over assessed. BUT the interesting finding is I also found 15% properties UNDER assessed by the city. THAT is a problem. Human nature dictates that a property owner will fight being over taxed, BUT no way in hell will they step up and tell the city they’re UNDER TAXED. This needs to be fixed ! EVEN Bernie Sanders our most well known Socialist will not pay more taxes although philosophically he should. Heck, Bernie doesn’t even ante up on charitable contributions now that I think about it. (Sorry for going off on a tangent) The next revaluation needs a little common sense added to the algorithm currently being used.

Unfazed? Probably more like punch drunk from the hits that keep coming and disengaged from the reality of what’s about to hit.

My commercial rate went up 150% on a 50 year old building. Not sure what my landlord is doing about it other than making me charge my customers more to make up for the hit, but these reductions look to be about 10%. With about a quarter of our budget relying on this, some quick back of the envelope math says about a $9 million hit if all businesses seek remedy which they would be foolish not to. That’s before legal expenses and then multiply that times 5 years and we’re talking a cool $50 million.

But this is just the tip of the ice berg. We haven’t even gotten to April tax payments from rental property owners who haven’t been able to collect rent for almost a year.

Then there are lots of goodies to unpack in the annual report.

Rainy day fund down $8 million to pay for this years increased spending Page 66.

Most alarming…..Our pension funds only grew by 2% during the same period the S&P grew 10% with 2/3s of it allocated to equities page 70 and 73. It only grew $9 million when it should have grown about $30 million. Given we’re paying over half a million to manage these funds do you think we can do a little better?

So are homeowners in Norwalk getting a refund as well or do we need to start a class-action lawsuit against the city?

It’s clear that the reassessment that took place is way off with reality.

@Bryan Meek – thank you for sharing the link to the city’s 2020 budget document. It’s quite a read, for sure.

Seems to me you’ve cherry-picked data to make a point, so I’ll counter: did you miss the footnote to the Aquarium expenditure that says it’s 100% reimbursable by the state? And as long as your talking about overtime, what about the $361K in extra expenditures for police community services?

Picking and choosing data like this can be a dangerous business – I encourage all readers with even a vague interest in how our tax dollars are spent to take a look and judge for themselves.

@Claire Schoen – 100% reimbursable by the state is your statement. Wondering who puts the money into the states pockets? Kindly reply.

@Clara – yes, restoration of the aquarium will be reimbursed by the state using public funds as part of a public infrastructure project. (I imagine there might be federal dollars in there but I don’t know all the details.) The full burden of this will not fall on Norwalk taxpayers via local tax dollars.
My point was that Mr. Meek chose to highlight only selective data points from this budget – that’s all.

@Claire. It’s not a budget document. It’s a report of actual financial data commonly referred to as the CAFR. Yes I cherry picked some data and thanks for reminding me the State is paying for the aquarium. Thank God we don’t have to pay state taxes.