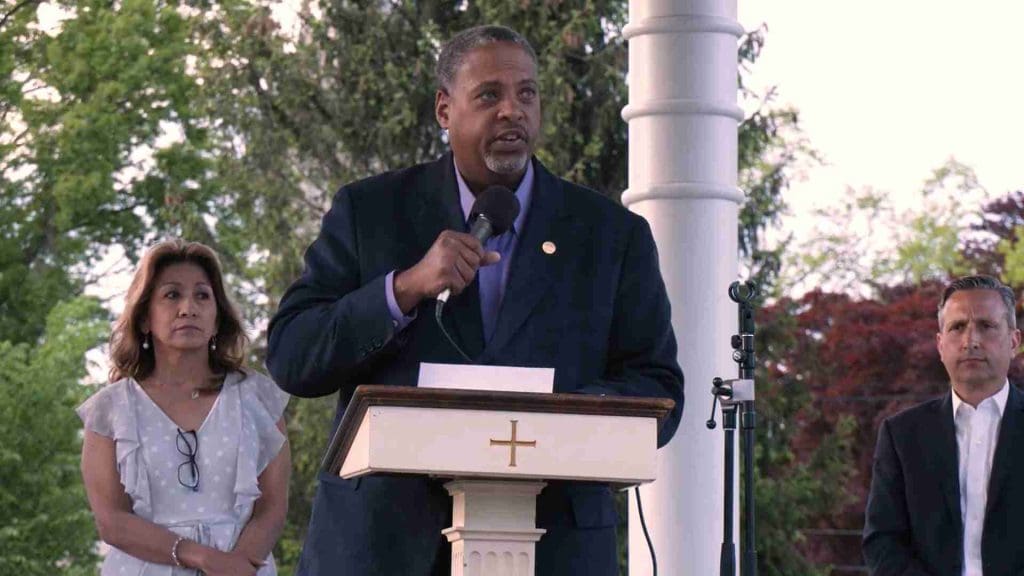 Norwalk Common Council member Greg Burnett (D-At Large) speaks Wednesday during a vigil on the town green. He asked, “How many senseless shootings will it take before real action is taken to address this?” (Harold F. Cobin) 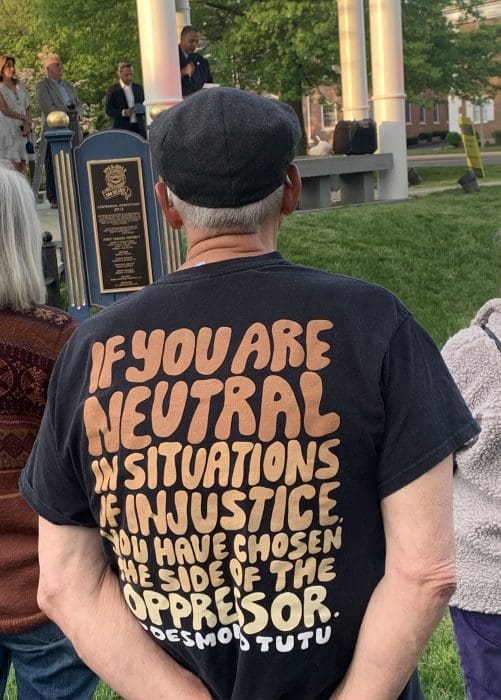 NORWALK, Conn. — A mass shooting in Buffalo over the weekend shows that gun reform is needed, multiple Norwalkers said Wednesday during a vigil held on the town green.

“If we truly meant what we said when we said Black Lives Matter, and we have a moral obligation to prevent one more life from being taken by gun violence,” said Jeremy Stein, Executive Director of Connecticut Against Gun Violence.

A white 18-year-old fatally shot 10 people at a Buffalo supermarket, after choosing the location because it was in a predominantly Black neighborhood, news reports say. Three people were wounded; of the 13 victims shot, 11 were Black.

The gunman had reportedly posted a hate-filled manifesto before attacking folks in Tops supermarket, saying that white Americans are at risk of being replaced by people of color. “Replacement theory” has been referenced by other gunmen during a string of mass shootings and other violence in recent years.

White supremacists will “use any excuse to hate,” Rilling said.

“Think about the replacement theory: White women aren’t having enough babies, so pretty soon, the white race will be played replaced,” he said. “I can’t understand the mindset of somebody who acts like that or has that thought. But we need to do everything possible within our power. And I know if we had given more time this green would be filled with thousands of people from around Norwalk, because Norwalk is a great city.”

“How many times more will it take before we finally root out and reject white supremacy in all of its forms? Right now, this theory driving these hateful, hateful murders is ripping at the very fabric of our nation,” said Common Council member Dominique Johnson (D-At Large).

“If I was grocery shopping in Tops store, on that day in Buffalo, there was a very high probability that I because of the color of my skin, I would not be standing in front of you today,” Council member Greg Burnett (D-At Large) said.

He said, “The tragic events in Buffalo have once again brought to the forefront that more must be done related to gun control and to stand up for ignorant and hateful speech and actions that feed intolerance.” 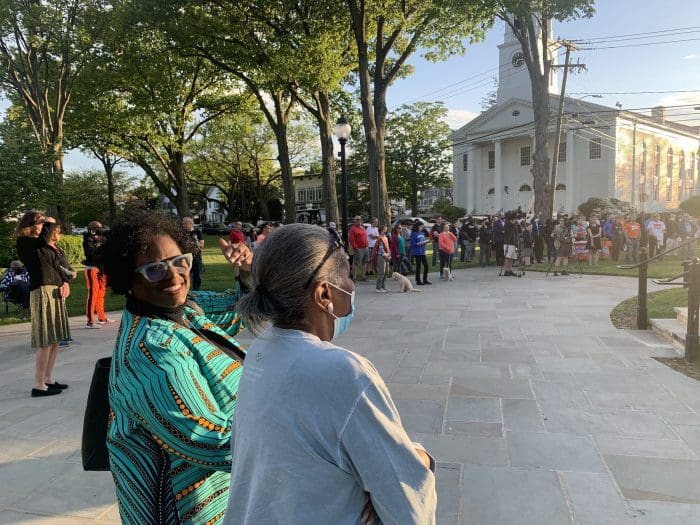 “This past year, gun homicides were the highest in 25 years, with 118 homicides in Connecticut,” Stein said. “Ten thousand hate crimes in the US involve guns. And we know that the crisis of gun violence disproportionately affects communities of color, mostly black males.”

“It is exhausting being Black these days. Watching the news, especially having a Black son, Black daughter. I’m terrified for my son,” said Tanya Rhodes-Small, Norwalk NAACP second vice president.

“We have to be activists, we have to stand up to oppression when we see it. We have to vote in every single election. I know you’ll get tired of me saying that. But more voters, fewer vigils,” said State Rep. Stephanie Thomas (D-143).

Norwalk Association of School Administrators (NASA) President Lynne Moore said that the vigil would show Norwalk’s youth that “we’re not just ignoring what happened in Buffalo, and other cities.”

“It’s important that we stand up and we make a statement. We don’t believe in replacement theory that we believe every person in this community has the right to have a full life and a valued life,” she said.

“We’re diverse community,” Duff said. “We’re a great community, we’re a strong community, it’s important for us to send a message to others within Norwalk and outside of Norwalk that we take a stand on these kinds of issues… we say to Buffalo, we stand with you during this difficult time.”

Thanks for organizing this. It is really sad that someone would drive 300+ miles to MURDER people, in particular to select a location that has the highest population of blacks. This truly is a HATE crime. I have friends in Buffalo, it could have easily been one of them. Buffalo, NY, who’s next? Sadly this isn’t the last mass shooting. We need gun control!

To Alma Lyons:
If by magic all the estimated 300 to 400 million weapons owned by Americans disappeared at once would “hatred disappear” and violent crime disappear from our major cities ? Not likely. And if you check the records there are very few instances of legally authorized permit holders who commit felonies with firearms. The overwhelming numbers of crimes committed in firearms in the US are committed by those who don’t meet the legal requirements for ownership. In fact they’re typically acquired by stealing/theft. Not by walking into the local gun shop with a credit card.

Here in the Buffalo case there’s apparent evidence the authorities didn’t follow the established laws and procedures. Presumably after holding vigils has ended those deficiencies will be looked into.

What is curious besides our high rates of gun ownership is the general absence of requiring guns to be kept in “gun safes” as is common in virtually every western nation.
So far elected officials have been reluctant to require gun safes. Even though they’re required for guns stored in autos. Why CT elected officials reject gun safes remains unknown. Reportedly California requires gun safes. But not CT or most other States.

If one is interested in reducing gun violence/homicides a good place to start is by asking why are there so many gun homicides in our major big cities. And why aren’t more incarcerated for owning/using illegally acquired guns. Here in CT gun violence largely occurs in our 3 largest cities. Why can’t we do better ? Authorizing more police doesn’t seem popular.

If one looks at the available data carefully there are societies that higher even much higher incidence of gun violence than the US. And there are societies like Israel where reserve soliders routinely store their military weapons at home in gun safes while for ordinary citizens securing a gun permit is very very difficult. Yet on a per capita basis Israel is a pretty safe place to live. Then there is Japan where individual ownership/access to weapons is pretty near forbidden and the cities from personal experience are virtually crime free.

In short, guns are not the problem. Its the people and the laws that regulate their use. Sadly guns are oft readily available in our cities. And our authorities reluctant to make illegal gun ownership a serious crime warranting incarceration. So we know our future.

Quite simply, our politicians like Bob Duff and Chris Murphy have chosen the easy path and villianized the Inanimate object, the gun, instead of the violent criminal who uses it. They are soft on criminals, allowing them to be released from prison after a few years of using a weapon in a crime and allowing criminals using a weapon in a crime to plea down to lesser offenses to be able to get back on the street to commit more crime. If they were serious about deterring gun violence, they would legislate mandatory 20 year minimum sentences for using firearms in a crime with no plea bargaining. That would put the focus on criminals and illegal gun violence and not law abiding citizens who own what is merely a tool like any other when used for a sport, or yes, self-defense.

It is time for us all to be vigilant.
The gunman should of been killed on site. He was raised to be racists and his parents need to be accountable too! Trust he was encouraged! By family, by network of associates… And he planned it out!!
If we think the law, more laws restricting access to pistols, protests are going to stop or change this, we are WRONG. black, brown, minority, etc… communities need to be prepared. Be mindful of your surroundings! Pay attention so when it’s our grocery store, church, etc… we got a chance!
word