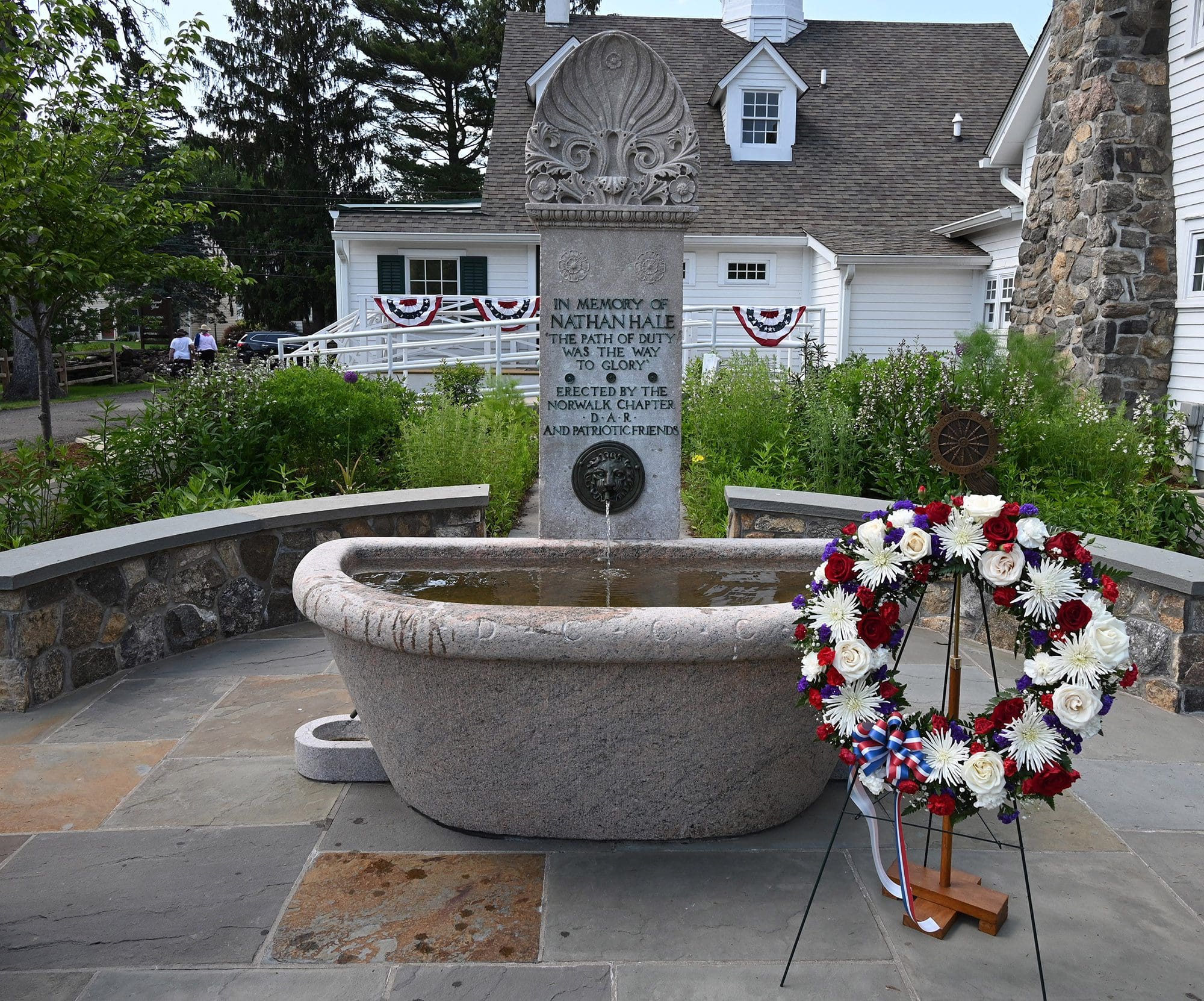 NORWALK, Conn. – Lisa Wilson Grant’s years of dedication came to fruition Sunday with the rededication of the Nathan Hale monument at Fodor Farm.

It was taken apart in the 1920s and its pieces went to different places, Norwalk Historic Commission Chairwoman Dana Laird said Sunday. When Grant became involved, the 31,000-pound granite trough was in Wilton. Another part, the stele, was at Nathan Hale Middle School.

“It didn’t deter her. She says, ‘I have a mission. I’m going to do this,’ and she did. It didn’t happen overnight,” Norwalk Historic Society Executive Director Diane Jellerette said.

A schoolteacher who enlisted in the Connecticut militia, Hale volunteered to spy for Gen. George Washington in 1776, according to ConnecticutHistory.org. He traveled from New York to Norwalk and set sail for Long Island Sound, set to pose as a school master, but got caught and was hanged. He is known for the supposed last words, “I only regret that I have but one life to give for my country,” an account that’s been questioned in recent years.

“Growing up in Norwalk, I was not aware of Nathan Hale’s connection to our city, or that there had been a monument here to honor him,” Laird said.

State Senate Majority Leader Bob Duff (D-25) noted that Fodor Farm also has a historic aspect and was saved from destruction. He predicted that the monument’s presence at the family-friendly community garden will influence future generations, saying, “There’s kids who are going to see that fountain and may be inspired to learn more about our history here in the city of Norwalk.”

Though it is not mentioned in this story, The Norwalk Preservation Trust presented Lisa with our Valle Weber Fay Preservation Leadership Award for her perseverance in restoring this monument to Nathan Hale. She has not only preserved an important piece of Norwalk history, but by having it installed at Fodor Farm, she has created new reminder of our past. As Senator Duff said at the event, the fountain will now serve an an inspiration to everyone who visits the main farmhouse and surrounding public gardens.
Valle Weber Fay was the president of the original Norwalk Preservation Trust, which was formed to save SONO from demolition in the 1970s.

Thanks for being a legacy keeper, Tod. Always lots of pomp and circumstance around “naming” (streets, awards, etc.) but just as important to keep remembering who these people were.