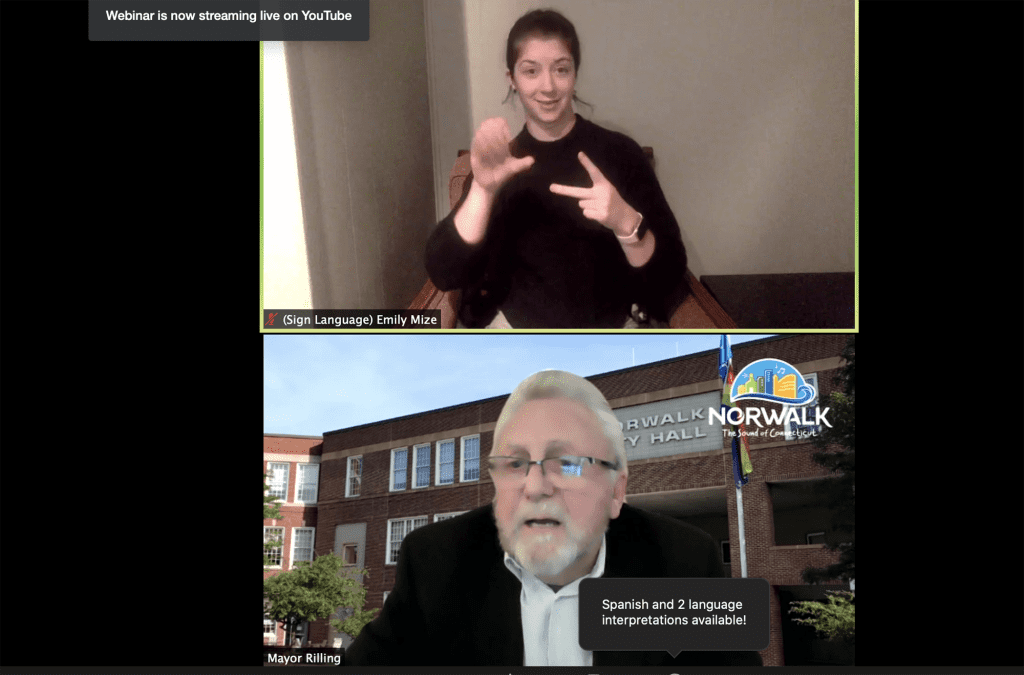 NORWALK, Conn. — Logistics, outreach, and handling skepticism among different communities were just a few of the topics addressed at a Tuesday virtual town hall meeting about the COVID-19 vaccine.

The goal of the town hall was to provide the community with information related to the vaccine and answer questions from the public in hopes of combating any misinformation, Rilling said. About 30 people attended.

Rilling said that the start of vaccination comes at a crucial time with almost all of the state’s 169 communities in the “red zone,” with the number COVID-19 cases each of them are experiencing.

Still, he emphasized that vaccines were “a light at the end of a tunnel,” not the end just yet, so other public health measures, such as wearing masks, washing hands, and social distancing will still be needed for some time.

D’Amore gave an overview of the two vaccines that have received emergency approval from the Food and Drug Administration (FDA), which are made by Pfizer-Biotech and Moderna.

Potential side effects are headache, fever, and pain at the site of the injection, she said.

D’Amore said that there have been a few cases reported of severe allergic reactions so she recommended anyone who is allergic to the ingredients in the vaccines, as well as those that have a history of severe allergic reactions to vaccines should talk to their doctors before getting the vaccine. Everyone who gets a vaccine is required to sit for a 15-minute observation period, but those with potential risks can be observed for 30 minutes and all providers are trained in handling allergic reactions. Those who have had COVID should get the vaccine if offered to them, health officials recommend, but they should wait until they have completely recovered.

D’Amore emphasized that supply is limited right now, which is why the CDC and the state health department are setting priority groups for who should get the vaccines in order. The first group receiving them now are health care workers on the frontlines of this pandemic, along with residents of nursing homes and longer-term care facilities. The next groups would be adults over 75 and frontline essential workers, such as those working in public schools and at grocery stores, followed by adults over 65 years old and those between 16 and 64 with medical conditions that put them at risk.

“It’s important to note that the vaccine is not expected to be widely available until this summer,” she said.

Dr. Jason Orlinick, an internist at Norwalk Hospital, said they started their vaccination clinic at the hospital on Friday last week, where they immunized about 135 health care workers and employees who interact with patients. They’re continuing vaccinations three days a week this week, followed by three days next week, and then amping up to 5 days a week after that.

“We’re expecting to immunize about 600 to 700 employees or members of the medical staff each week,” Orlinick said. “And over the course of about six weeks, we should be done with about the 2000 members of Norwalk Hospital who interface with patients on a regular basis. So we’re pretty excited.”

Orlinick said that he got his first dose last Friday and he felt “extremely great” after.

“I had a little bit of arm pain, and then on Saturday, by the end of the day, the arm pain was gone, and I didn’t have a fever,” he said. “I had a little bit of a headache, but that’s probably my regular headache that I get from stress. And otherwise I thought really well. Most of the side effects come after the second vaccine, which for the Pfizer vaccine is on day 21, so I’ll be getting vaccinated again in a little less than three weeks. And after that vaccine, I’m expecting that I might have a fever or some joint pains or muscle aches.”

Once the hospital finishes vaccinating its patient-facing staff, Orlinick said that they would reach out to the state department of health to see where they should work to vaccinate next.

Outreach to the Community

As the vaccines begin to be rolled out to larger groups of people, communication with the public will be critical, according to Josh Morgan, communications manager, who will be working the outreach side of the task force.

“We’re going to be tasked with providing accurate and timely information — we’re in the process of creating a dedicated landing page, the homepage of the city website, which will be updated frequently,” he said. “One of the things that we’re really going to be focused on is pushing back in fighting the deliberate and perhaps unintentional sharing of misinformation.”

Morgan said they’ve set up a dedicated email address — [email protected] — where members of the people with questions can reach out.

Morgan said the group will be extra mindful of their outreach to the Black and African American communities as well as the Hispanic and Latino communities, due to the history of mistrust between those groups and the government.

“Things we want to consider is the medical mistrust and the history of research, abuse, and exploitation of communities of color,” Morgan said. “The Tuskegee experiments are just a generation away very top of mind, for many in the Black and African American community.”

Curtis said that he’s seen reports and studies that more than 55 percent of the African American community said they were against taking the vaccine.

“African Americans are three times more likely to die compared to our white counterparts. We are nearly four times likely to be hospitalized,” he said. “But yet we are 57 percent against taking the vaccine. We understand the mountains there that are yet to be climbed. We understand the hesitancy, we understand the historical perspective. So we will be doing a lot of communicating and sharing.”

Curtis said that he wanted to be a part of this group to make sure that the vaccines are distributed equitably.

“Our concern is to ensure, and this is not to suggest otherwise, but we want to ensure that there is equity in the distribution of this vaccine,” he said. “The issue is communication.”

Curtis encouraged those who were skeptical to talk to their trusted medical professional.

Rilling said that there would be more town halls in the coming weeks as the vaccines begin to roll out. He encouraged people to keep following public health guidance to combat the virus.

“This is kind of light at the end of the tunnel, we hope, but it’s not the end of the tunnel,” he said. We’re still in the pandemic and will be most likely for quite some time. People still [need to] continue to practice social distancing, wearing your face coverings at all times when you’re out in public or in a group of people, washing your hands and doing all the things that have worked to a degree.” To Anyone who’s skeptical of vaccine…Please call me, I’ll be more than happy to take your place in line..