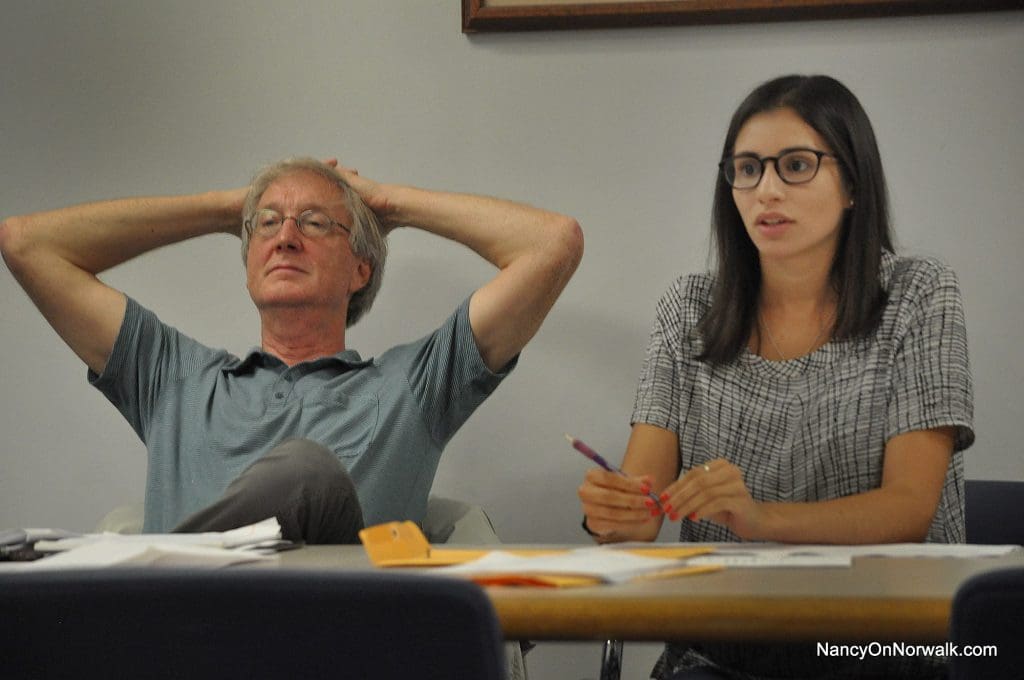 The plan would offer financial incentives to encourage certain developments in hopes of revitalizing the Wall Street/West Avenue area and diversifying its economy with partnerships that proponents believe would fuel job growth.

Incentives would be awarded by the Common Council on a case-by-case basis.  Redevelopment Agency Executive Director Tim Sheehan has said that the Innovation District idea was developed because Council members objected to automatically granting incentives via an Enterprise Zone.

The Planning Committee moved the proposal to the Ordinance Committee in May, after discussing it for more than a year.

Doug Stern (D-At Large) and Beth Siegelbaum (D-District C) objected Tuesday to including incentives which they said would lead to construction of more apartments.  Tom Livingston (D-District E) supported the proposal, arguing that the ordinance would just be creating a tool in the toolbox for future Councils to use, including the flexibility to award incentives for apartments under certain conditions.

“The idea was to get flexibility,” Livingston said. “You might have a business that will come in but they need to have a residential component of it to make it work, or as Tim said last time, to provide apartments for the workers.”

Livingston, Stern and Michael Corsello (D-At Large), all attorneys, discussed details of wording, including the definition of “related entity.”

“I want to avoid any appearance of shady dealing…. anyone who is tainted shouldn’t be able to work through another entity and get the benefit of this,” Livingston said.

The definition for “mixed use” was drafted as “pedestrian-friendly development that blends two or more residential, commercial, cultural, institutional, and/or industrial uses.”

“If the purpose of this whole proposal is to create a certain set of rules within a certain geography to afford the Common Council flexibility when it comes to encouraging certain sorts of industries, and the purpose of that is to encourage certain new industries and job creation, I can accept that,” Stern said. “I just don’t see how mixed-use development as commonly understood accomplishes that goal.”

“I have a fear that the moment we do something like this, they’re be a flood of developers claiming poverty as to reasons why they can’t approach certain parts of town for certain types of development,” Stern said. “I don’t think that is a necessary tool in our toolbox. I think that if market factors change to the extent that we need to include it, we can take it up at that time.”

Committee Chairwoman Eloisa Melendez (D-District A) asked him if he meant residential developments and Stern said yes, mentioning the five-six story Waypointe size mixed-use buildings.  Some opponents have speculated that the incentives are being designed for the Waypointe South Block project.

“I think jobs and the types of things we are trying to bring are directly connected to mixed use and the residential piece,” Melendez said. “I know in some ways it’s worked in the Merritt 7 section of town…. If we are going to do this ordinance we have to include possibilities for everything.”

“I don’t see why Norwalk needs more apartments right now. It’s just all these new apartments and from what I have been hearing about town, nobody is happy about it,” Seiglebaum said.

Livingston suggested that the allowable percentage of residential housing could be tweaked and emphasized the “tool in the toolbox” idea, then agreed that “there’s not a complete confidence in the ability of the Council to make the decision.”

“I think approving this is a very slippery slope. I would hope that any Common Council is going to take it very, very seriously and scrutinize any applicant that comes before it,” Corsello said.

Corsello, Livingston and Melendez voted in favor of moving the proposal to a public hearing.  Chris Yerinides (D-District A), Stern, and Siegelbaum were opposed.

“I just have a lot of issues with it, big picture,” Yerinides said after the meeting.

After the 3-3 tie, Melendez professed uncertainty regarding her options.

The chairperson of other Committees can move a matter to the full Council for a vote without the Committee’s approval, she said, asking Assistant Corporation Counsel Brian Candela if she could do the same for a public hearing. Candela suggested a recess so he could look it up but Melendez declined. He agreed to research it later.

If the vote had been four to two, she wouldn’t be considering it, she said.

“This issue has been on the agenda for couple of meetings and not that many people have spoken, but … I read a lot of chatter so I don’t know if actually saying ‘there is a public hearing on this issue’ will bring more people out,” Melendez said. “Because people definitely have opinion on them … that’s kind of why I want to bring it to public hearing.

Afterwards, Melendez said that she thought that if there can’t be a public hearing, that would be the end of the proposal.

Livingston said he was guessing it’s the end of the proposal “in that form,” given that the tie vote meant it was voted down.

It has seemed to me that this was a quid pro quo for certain developers who support the mayor financially. Good for the three who aren’t in his pocket and voted against using taxpayer money as the other side of graft.

Economic development tools in the toolbox tend to incent businesses, not buildings.

Thank you Mr. Yerinides, Mr. Stern and Ms. Seigelbaum for exercising common sense and awareness of public opinion. Confidence in our local government regarding land use transactions is at an all time low. Timing is everything and giving away more tax payer dollars at the behest of the RDA as residents wise up to the Poko debacle is not a wise move. Do Common Council members really want to be in the business of picking winners and losers or being pressured to in executive sessions? I don’t think so.

you cant say ignorance you can say arrogance with most of the people in charge.

Redevelopment Agency Executive Director Tim Sheehan days may be numbered why are we still listen to him Tom?

while the city is suing one of the largest city employer’s that makes drugs and where Harry was just grandstanding in Danbury over it what makes the city think living and working in Norwalk is a goal? Wake up your mayors are running a show you were not invited to.

With them mall changing hands soon and talk of everything but a mall whats the city going to do tell the new owners you cant do what you want with this building ? The RDA is doing a great job on the new mall or are they? Like everything Tim touches falls apart good luck with your mall doubt if what it was going to be is after the sale in a couplle of days.

Its nice this committee thinks inside the box , start thinking outside the box Norwalk need you now more than ever before.

Economic development work should include reading the current news.

Do any of the Council members on the Committee or the Mayor have significant experience in business development or major league business experience ? Does anyone not expect only our “friendly developers” will take advantage of City “business subsidies”. ?

City leaders should insist RDA focus on a train station at Wall Street instead of this Innovation District. A train station will go a whole lot farther in providing economic incentive to the area and cost a whole lot less.

Beth, Doug, and Chris: Thank you for demonstrating the kind of independent, rational thought and non-partisan representation that has become all too rare in this city.

After 7 months of rubber stamps – nice to see a glimmer of hope.

At this same session (not reported by NON), I reminded the commissioners that two consultants recently suggested that light industry (in the Enterprise Zone)would be a better choice to round out Norwalk’s renaissance, as opposed to additional residential mixed use.

However, light industry requires an environment Norwalk has lost, work space with loading docks for example, not more “mixed use residential”.

Skilled professionals, not currently on hand, are required to create the sales pitch necessary to sell Norwalk as a place to start or expand a business.

Time ran out for me before addressing “tax incentives”, which are developers subsidies at the expense of Norwalk’s stakeholders.

Our Grand List has only increased by 3% in the years from 2013 in spite of the millions invested in residential construction!

We need a comprehensive PLAN to attract and support “light industry” growth, not more of the same!.

Get off the Train! Metro North is the only one with the power to open the train station. The horse is dead, get off!

@ Teacher – then you must presume your future pension is dead as well with that attitude. If this city and state do not revitalize (politicians, business and transportation working together) then pack your bags, because we’re on the road to bankruptcy and it will hurt you far more than those of us not attached to a city or state paycheck/pension. Although we pay with the devaluation of our largest financial asset – our homes.

The Wall Street area has a platform, was once a vibrant downtown and now has far more residential units than in the 1950s. We can either become a model northeast midsize city with a vibrant riverfront and transportation to match or die on the vine like Bridgeport. I know what I want.

All the work on the new bridge how many times have you heard about surface crossing on the Danbury line?

When have you heard the term?

This new rail yard could possibly hold hazardous loads who in the city made sure thats not the case?

Maybe sending someone to train school would help

its mot like the city hasn’t sent dept head to :Las Vegas like last week on the taxpayers dime for a week convention is it?