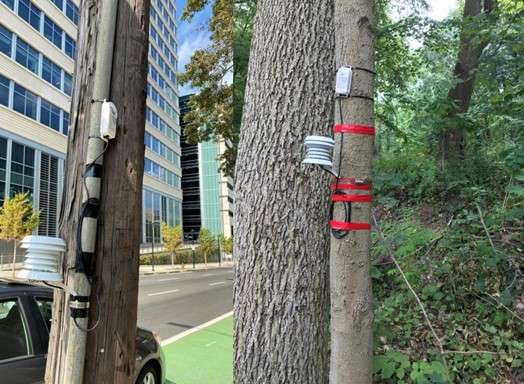 NORWALK, Conn. — Norwalk is working to address climate change by installing heat sensors across the city.

“Due to climate change, heat waves are expected to become more common and intensified, which can be dangerous to human health and wellbeing. The heat sensors have been mounted on trees or electric poles to track temperatures in different settings within the City over the next four months to allow Norwalk to better understand local environmental conditions,” a news release said.

Thirteen non-invasive, temporary, wireless heat sensors record temperature, relative humidity, and dew point temperature at the street level to identify vulnerable areas to heat and extreme climate conditions, in a partnership with the Connecticut Institute for Resilience and Climate Adaptation (CIRCA). 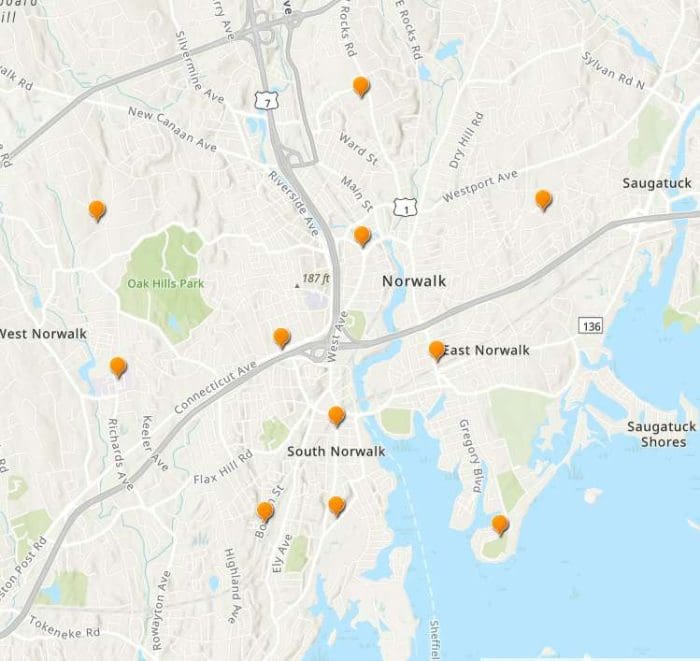 A map showing the location of Norwalk’s heat sensors. (Connecticut Institute for Resilience and Climate Adaptation)

“Extreme heat is a leading cause of climate vulnerability,” Mayor Harry Rilling is quoted as saying, calling this a “proactive” move. “This initiative will help the City identify vulnerable areas to heat so we can implement the most effective ways to help our community prepare for when temperatures become oppressive, especially among disproportionately affected communities.”

Heat sensors are strategically placed approximately 5-6 feet above ground so that data can capture the differences between street and satellite measured temperatures and heat vulnerability in the area, the news release said.

“If you see one of the heat sensors in the community, we ask that you leave it be and consider explaining the significance of how it will help the City learn more about climate vulnerability to others,” Rilling said. “This initiative is an opportunity to implement natural climate solutions, especially in urban areas where people experience warmer air temperatures.”

“City landscapes tend to have hotter temperatures than surrounding areas,” the news release said. “Norwalk plans to use the heat index data to identify the variability of air and surface temperature over time, especially as it relates to urbanization. This will help the City determine policies such as where to place cooling centers and concentrate efforts to alleviate heat-related illness, as well as understand how certain traffic flows affect heat output.”

The City lists these locations as having sensors:

The locations were chosen based on heat vulnerability data from CIRCA, with a goal of diversifying locations while also selecting sites close to public facilities such as schools, municipal buildings, etc., the news release said. You can learn more about this project through CIRCA’s Norwalk Heat Study, here.

Norwalk Community College is also involved in the venture.

Yes, let’s ensure the accuracy of the data collected on atmospheric warming by installing heat sensors just steps away from a long patch of sunlight-absorbing and heat-radiating black asphalt that’ll char your feet if you walk on it barefoot, and just a few
feet away from a massive heat-absorbing steel, concrete and glass building with a sun-reflecting glass area the size of a football field aiming its light right for the sensor. Brilliant!

This seems a little overkill don’t you think?

Will they monitor the hot air being emitted at City Hall?

What a waste of taxpayers money.
I could answer every question the politicians who came up with this gibberish in one 1/2 hour sitting.

Are they going to put up sensors to find out why the sky is blue ?

That’s one heck of a list for the so called climate alarmists.
Bouton St. In the heart of heat trapped S. Norwalk.

The beach..we’re at the beach? On a tree in the heat pumping parking lot?

East Norwalk Train Station. Ever stand on a train platform in the summer heat? The heat and humidity coming off the tracks is 15 to 20 degrees hotter than the parking lots.

Where on Huckleberry Drive???

Norwalk High School? Where? Next to the artificial turf that gets to about 120 degrees in the sun?

Rowayton Beach. Next to the sand that heats up with the sun.

Last but not least West Rocks. The highest point in Norwalk. Heat rises.

You want to tell me what the results will be. No need to. It is very clear that 11 out of the 13 locations are locations that reflect heat and humidity at higher than normal level.

Again, drive up Rt 25 north. You’ll see a weather station on the right north of Trumbull. That station was surrounded by woods prior to the highway being built.

Now,tell me again how a heat absorbing surface does not affect the readings that will be recorded.

Gathering scientific data points around the City is a good thing!
In addition, there are many other actions that each of us can do now in order to reduce the impact of a hotter planet on our lives. For example, in order to prepare for the hot, hot summer months, get a Home Energy Audit (Energizect.com for a list of contractors and insulation incentives) …An energy audit is not just for cold air leaking into your house in the Winter…hot air also leaks into the home in the summer causing you to pay more for electricity to run the fans and air conditioners. As one of those who have advocated for actions related to reducing the heat island effect for years, I look forward to the action steps that should result from this study!

One added sample location that would be of interest: Please place one of the heat sensors on the Norwalk High School Artificial Turf Football Field or any of our collection of Artificial Turf sports fields found all over the City. The summer temperatures can often cause the playing surface to exceed 100 degrees F, an unhealthy situation for our youth and all who use the fields….Natural turf never heats up to that dangerous level. Would love to see that sensor measurement.

This is a disgusting and disturbing waste of tax payers dollars. Natural climate change has become a huge money maker for some politicians .

I would bet that the increase in urbanization that we’ve seen over the last 10yrs in Norwalk means that the temperature here in Norwalk has likely increased a lot more than the global average.

Slowing over development and increasing green space in the city is certainly one way to curb the “Urban heat island effect”, which could easily be a larger variable in Norwalk’s own local climate that global carbon dioxide concentrations.

I’m sorry, but this seems so ridiculous. They are wasting taxpayer money on tracking something that–(a) is probably nothing more than cyclical–(b) cannot do anything about–(c) they are likely making worse by allowing the overpopulation of our city to proliferate.

Now the mayor believes he is a climate scientist? What’s next? Doctor?

Thank you commenters for the belly laughs! While we’re on the subject, have you watched Michael Moore’s new documentary on climate change?

Can’t we have some dissenting voices?

I remember a little plaque we had on our boat:

How about a cheaper solution?