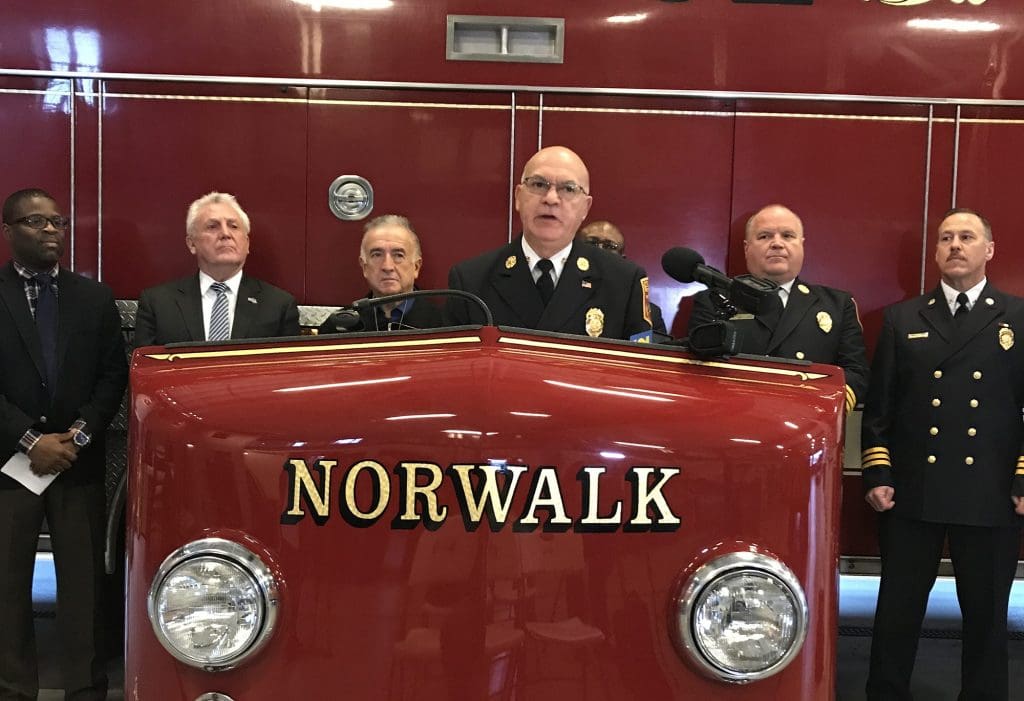 NORWALK, Conn. — Norwalkers who hope to become firefighters can now pay one fee and apply to 15 different departments, Norwalk among them.

“Fire Departments recognize that attracting the best candidates is expensive and time consuming for both the municipality and applicants as well,” Gatto said. “We have found the candidates are testing across the state whenever a municipality announces they are hiring. This involves spending a lot of money and time traveling to different fire departments to take their test. This consortium is an opportunity for potential firefighters to pay one fee, take one test that can be applied to multiple fire departments.”

Potential firefighters will pay $145 to apply to the 15 members of the consortium, which Norwalk will waive given proof of economic hardship, Gatto and Rilling said.

“Three years ago, the city spent $110,000 to establish an entry level firefighting list,” but this time there will be “no cost to the city for the written exam and oral interview,” Gatto said.

The consortium was established in 2018 with 11 communities but at the time, Norwalk had already established its own entry level test, according to Gatto. This was done through Industrial Organizational Solutions, a national testing company, the same firm working with the consortium, which includes fire departments in North Haven, Wilton, Westport, New Canaan and Fairfield.

Industrial Organizational Solutions (IOS) “will oversee all aspects of their written and oral exams, including a web-based application, which is very important because they will now go online to apply through IO Solutions. They will not go through the city of Norwalk Personnel Department,” Gatto said. “They’re also in charge of examination scheduling, recruitment functions, acceptance and screening of job applications. Once the testing process is completed and the ranking of the candidates is provided, the hiring process goes back to the hands of the local fire department.”

Applicants could use the Norwalk Public Library computers or come to the fire department and use the computers there. The application process has already begun and will run through Feb. 12. The Norwalk written exam will be March 14 at Norwalk High School and oral exams are in early April.

“So the purpose here, as the chief mentioned, is to attract the most highly qualified firefighters,” Rilling said. “… We’re doing that by reaching out to the various organizations within the community, the faith-based organizations to help us recruit. We’re also looking to the firefighters here to reach out to people that they know might be interested in becoming a firefighter and asking them to help us in the recruitment process.”

The Fire Commission has been vetting the consortium idea for months “to make sure that it was going to be a fair and impartial test that we would not be discriminating and how we would handle people that perhaps could not afford the test, and so forth,” Rilling said.

“We are very excited about this opportunity to really bring to the city a win-win situation,” Fire Commissioner Oscar Destruge said. “We continue with IO Solutions, which in the past has been a very good organization. However, in this situation we are, it’s a win-win because we are saving money and it does not detract from us the ability to hire the best and to continue to seek a diverse firefighting staff that represents our beautiful city.”

How about bonus points for those that call Norwalk home?