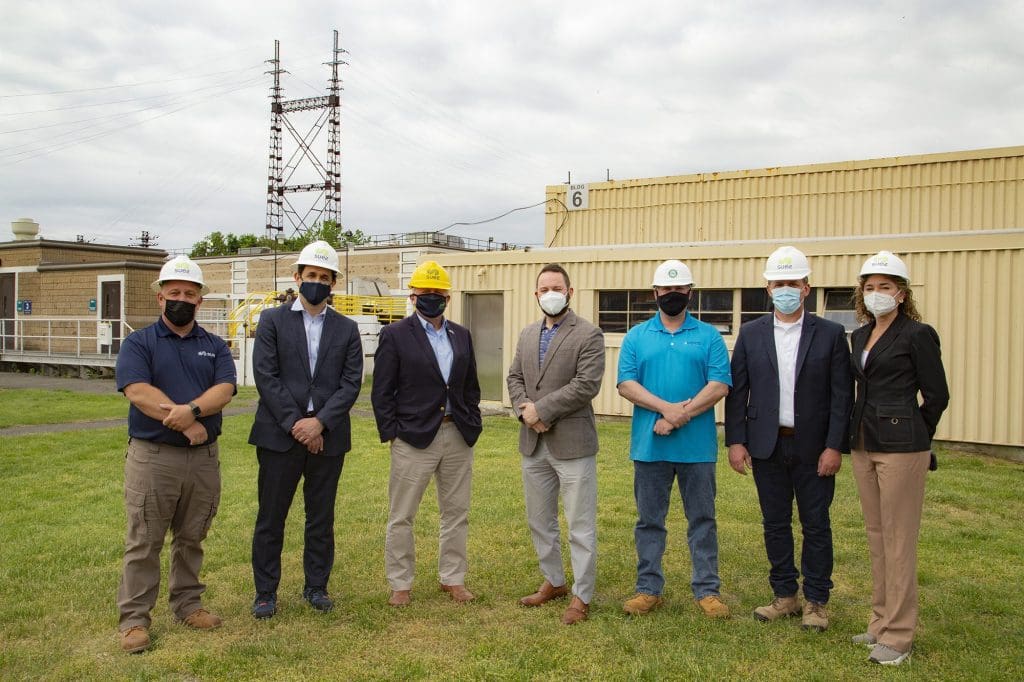 NORWALK, Conn. — City officials are touting the change in operator for the Norwalk wastewater treatment plant as a success, after one year’s worth of results to point to.

“The SUEZ partnership has gone very well, even with COVID-19 challenges in the past year,” Norwalk Senior Environmental Engineer Ralph Kolb told Common Council members recently. “In fact, in July 2020, only three months into the new contract, operating contract, the wastewater treatment plant achieved its lowest ever monthly nitrogen discharge of 340 pounds per day, out to the Sound. For the calendar year of 2020, we achieved the lowest all-time record for nitrogen, again, at 498 pounds per day.”

Suez Water Environmental Inc. took over the Norwalk wastewater treatment plant operations on May 18, 2020, ending OMI Inc.’s 20-year tenure at the facility. On Monday, the City marked the anniversary by releasing a celebratory photograph and some milestones they say have been achieved.

During its first week of operating and maintaining Norwalk’s wastewater system, Suez “set up training for its acoustic inspection tool. While conducting an exercise, SUEZ discovered that the pipe used for training was practically 100% clogged and a sanitary sewer overflow was imminent. The company’s employees were able to react immediately, clean the line, and prevent a possible sewer overflow over Memorial Day weekend,” a press release said. “The acoustic inspection tool has allowed SUEZ to continue to assess and prioritize sewer lines that need maintenance.”

The press release mentions the “immediate improvement in the nitrification and denitrification process,” commenting that “large concentrations of nitrate or nitrite can pollute groundwater and surface waters.” SUEZ workers “made several mechanical improvements to the air system and optimized dissolved oxygen settings to produce the lowest total nitrogen sample results ever experienced in Norwalk,” it said.

“In the first full year of operations in Norwalk, SUEZ discharged 25% less nitrogen than any year prior,” it said. “Excess amounts of nitrogen discharge can create overgrowth in aquatic plant life, leading to toxic conditions for species living under water. The lower level of nitrogen discharge has provided the benefit of cleaner effluent and improved water quality conditions for Norwalk, resulting in many happy oyster fishermen whose livelihoods depend on clean water entering their waterways.”

Save the Sound, an environmental nonprofit, released its 2020 Long Island Sound Report Card in October. Norwalk’s inner harbor scored an “F,” Middle Norwalk Harbor received a B-, and Outer Norwalk Harbor received a B+. The Norwalk’s Harbor Management Commission and Mayor’s Water Quality Committee Chairman Joe Schnierlein blasted the Save the Sound report card as using dated, limited information. Not only was the data used from 2019, but it was also only from the summer months, Schnierlein and others said.

While Kolb reported 498 pounds of nitrogen per day for 2020, on May 6 SUEZ Assistant Project Manager Matthew Brown told Water Pollution Control Authority members that the average for the previous year was 437 pounds a day. The April average was 381 pounds a day, he said, characterizing that as “decreasing the 20-21 running average to 510 pounds.”

Mayor Harry Rilling is quoted in Monday’s press release as noting that Norwalk was given a bronze certification by Sustainable CT in October. “This is a statewide initiative that encourages and supports communities in becoming more resilient, inclusive and efficient. We believe the impact that our partnership with SUEZ will vastly improve our environment and lead us into a more sustainable future. I’m proud to have been a part of this transformation and to see the positive effects it has had not only for the environment, but for industry as well,” he said.

SUEZ brought in “smart” sewer covers “that have a played a major role in detecting sewer overflows before they occur,” the press release said. “Smart Manhole Cover sensors are typically installed within manholes that have a history of overflows or are close to sensitive locations, such as hospitals, schools and beaches. In the first year, the collections team in Norwalk has successfully prevented three sanitary sewer overflows and one pump station failure by using this technology.”

SUEZ has a 10-year contract with the possibility of two five-year renewals. The company hprovides wastewater services to nearly 150,000 customers in Connecticut, the press release said.

Kolb, in April, said SUEZ had been cleaning Butler Street sewers. John Marcin, a project manager with SUEZ, said that 1.43 miles of sewer cleaning and 1.6 miles of inspection via television were done overall in March. More than five miles of SL-RAT inspections had been done, and the March average pounds of nitrogen per day was 551.

Xavier Castro, President of SUEZ’ Environmental Services division, is quoted in the press release as saying that the Norwalk’s city-wide plan, or Plan of Conservation and Development (POCD), “focuses on both smart growth and sustainable development through preserving existing environmental resources.”

“That mission is in line with our belief that the future of environmental sustainability depends on innovative technology and solutions,” he said. “We have integrated every resource we have available into the operations in Norwalk. These tools combined with Norwalk’s leadership and our experience and expertise have enabled us to improve much of Norwalk’s wastewater operations in just one year.”

“SUEZ is doing an amazing job,” Rilling recently told the Board of Estimate and Taxation. “They are really stepping up to the plate, the operation is running like clockwork.”