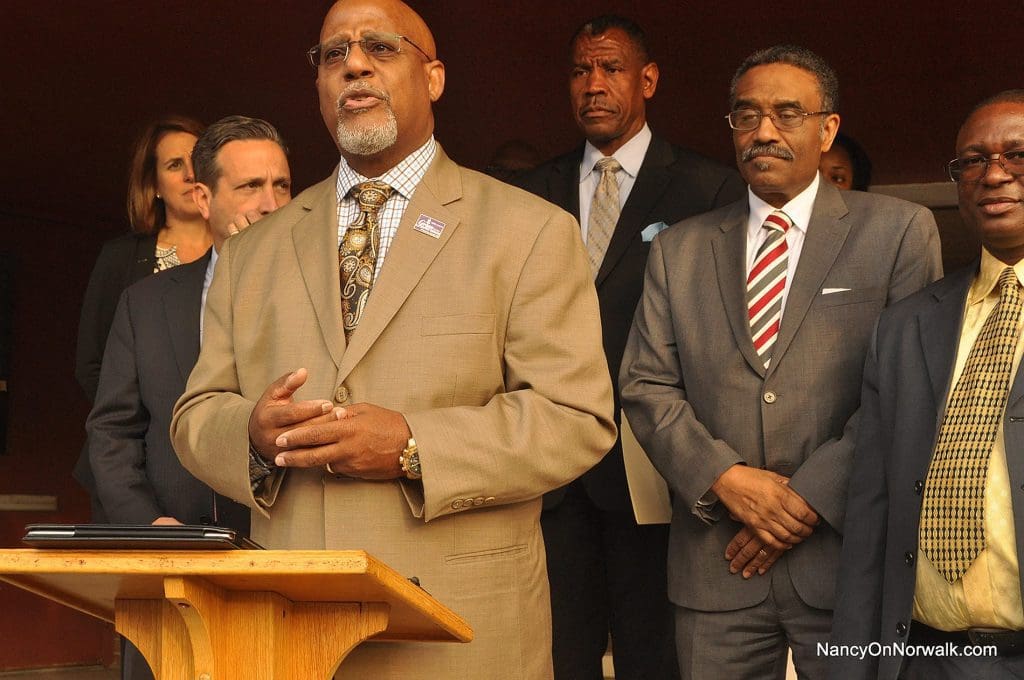 The Rev. Lindsay Curtis, pastor of Grace Baptist Church on West Avenue, begins a Monday press conference. “We are here to express our support for equity in education in this great state of ours,” Curtis said.

NORWALK, Conn. — Connecticut needs to change its educational funding formula by the end of next year’s legislative session, a group of pastors said Monday, in the company of three Norwalk-area state legislators.

“Everyone who is minimally informed on our educational formula knows that it is inequitable and therefore because it clearly poses a severe risk of injury to minors is in fact and in effect criminal. If I intentionally shackled and injured a child I would certainly be prosecuted to the full extent of the law and should expect the same,” the Rev. Carl McCluster of Bridgeport’s Shiloh Baptist Church said, standing outside Grace Baptist Church in Norwalk.

“I hereby call upon the Connecticut state legislature and every elected and appointed official remotely affiliated with the education of our children to either turn themselves in for what would be certainly incarceration or to take a stand, as some will do here today, to demand the justice that will create equity in education for Connecticut’s children,” he said.

The call to action was organized by ConnCAN, a New Haven-based education advocacy organization, as a follow up to a recent open letter signed by more than 100 Connecticut clergy leaders. This was in response to the decision by Superior Court Judge Thomas Moukawsher in the lawsuit filed against Connecticut by the Connecticut Coalition for Justice in Educational Funding (CCJEF).

Moukawsher said Connecticut’s Educational Cost Sharing (ECS) formula is irrational and ordered legislators to come up with recommendations to change it within 180 days. Attorney General George Jepsen called this overreach and appealed the decision to the State Supreme Court.

The clergy are asking for immediate action. 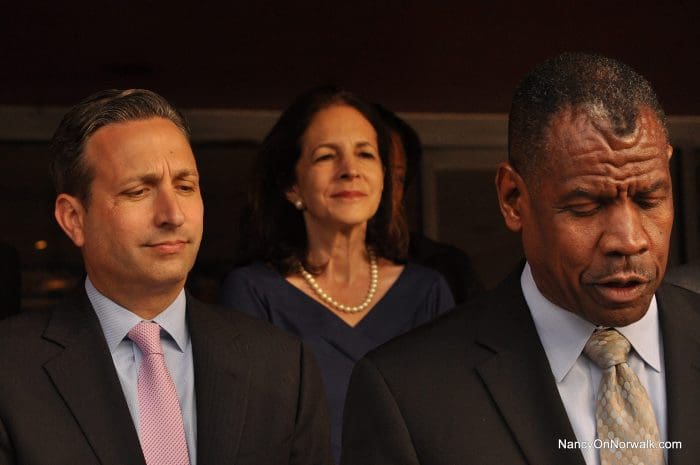 “As their chair, I would say that most of our best legislation has gotten done when we have had the clergy come to bear and stand with us,” he said, urging that Connecticut seize the moment.

June of 2017 is adequate time when you look in the eyes of children of color who need an education, he said.

“If we do not have an educated workforce we cannot grow jobs organically if we do not have kids who are prepared for the 21st century. So not only can we not let our children down, who are graduating and going through the school system, we need to make sure we are supporting our local businesses by giving them that workforce that is ready and able to produce for those jobs for 21st century,” Duff said. “…  This is an opportunity that we have not had in a very long time. I am excited about the prospects of having a funding formula that meets the needs of our children across the state of Connecticut and especially here in Norwalk and Darien and Stamford and Bridgeport and other places as well.”

“This is not new, folks. This is something that we have been trying to do for some time,” Lavielle said.

Lavielle made an unsuccessful push to change ECS in 2012-13.

“I was told at the time, ‘No you can’t do it because some towns will have to give up money,’” she said. “Now it looks like maybe everybody is going to play ball. We have to. We have to because there are such stunning inequities in this state, that affect everyone who has not have adequate access to a prime education.”

“I have heard and seen parents of my congregation and community deeply expressing their concerns of the injustice of the public education system that is letting too many of the parents and children down,” said the Rev. Dr. Richard Clarke of Norwalk’s Bethel African Methodist Episcopal Church. “… It’s time for our legislators to adopt a fair education funding formula. One that lives up to the promise in our state’s constitution to provide a quality public education to all of our children.”

Connecticut citizens should “rise up, not against a fair and equitable national election but against the unfair and inequitable education system fueled by the cancerous funding formula that has and continues to cripple the ability of schools to put their best feet forward to educate our children,” McCluster said.

“The fact that the large majority of these affected and afflicted children are members of low income and minority families and community amounts to intentional genocide for this segment of our population,” he said.

“We can no longer continue to fund schools arbitrarily and neglect the most vulnerable students, especially like communities here in Norwalk and in Bridgeport,” said ConnCAN CEO Jennifer Alexander.

The state’s population is becoming more diverse and jobs are going to require more education, she said, asserting that for the first time last year the majority of the state’s kindergarten class was made up of students of color.

In 2020, 1/3 of the working age population and nearly half of the youngest workers will be people of color, and 70 percent of Connecticut’s jobs will require college degrees, she said.

Since the recession, 90 percent of available jobs have gone to college graduates, she said.

“Too few kids, especially children of color, are ready to compete in this new economy,” Alexander said. “Recent SAT scores show that only 39 percent of our state’s 11th graders are college ready in math, and even fewer students of poverty are ready for higher education. Way too many students in Connecticut end up needing remedial course work for college. Here in Norwalk, about 65 percent of students had to take remedial course work when they went to college.”

Democrats have long had a super majority in Hartford. So we know where the failure lies with ECS.
. It’s a long story of failure. Sen. Duff it’s your turn.

Get it right Piberman, we are not playing the BLAME GAME we are trying to come TOGETHER AND MAKE IT WORK !!!!

I agree, for a change. No blame game.

If Democrats who control the Legislature can’t fix ECS who can ? And why haven’t they done so ?