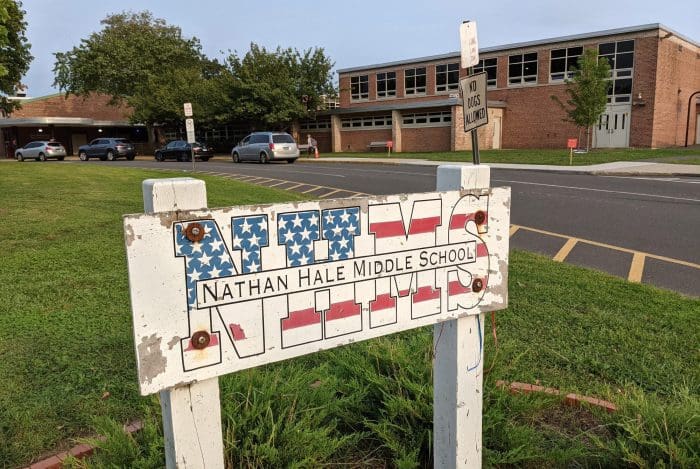 “Once we get more details about how this unfolded, and what was said, we are looking to determine whether or not there was any bias crimes that were committed based on these comments,” Rilling said to Democratic Town Committee members.

A statement from Norwalk Branch NAACP President Brenda Penn-Williams explained Thursday, “The teacher said the N-word in varying ways repeatedly and in a negative way, even though it is understood that a teacher cannot use this language in a classroom filled with students and expect it to have anything other than a negative connotation, no matter the intent or the context.”

“Once we get more details about what was said, the police department along with the local prosecutor will determine if the incident rises to the level of a bias crime per the Connecticut General Statutes,” Rilling said in a text message to NancyOnNorwalk.

“Connecticut has several statutes that deal with hate crimes. The statutes protect a range of people, enhance penalties for bias crimes, and allow injured parties to sue for money damages,” Michelle Kirby, then-Senior Legislative Attorney, wrote to the General Assembly in 2017. “The primary criminal statutes are the ‘intimidation based on bigotry or bias’ crimes.”

The statutes “address certain actions that intimidate or harass another person because of his or her actual or perceived race, religion, ethnicity, disability, sexual orientation, or gender identity or expression,” she wrote. For instance, “Ridicule on Account of Race, Creed, or Color” would be a class D misdemeanor.

Norwalk Board of Education Chairman Colin Hosten called the “possible racial insensitive insensitivity on behalf on the part of one of our teachers” a “very upsetting and frustrating incident.”

The district will be releasing another statement Tuesday, he said, predicting it will “shed more light.”

“It’s a matter that we take as the highest priority,” Hosten said. “And I can say that it is being dealt with at the district level, there are certain things that you know, have to be done in such a process, but that any employee who is found to violate our utmost commitment to equity and safety for all our students will face appropriate consequences.”

Penn-Williams thanked him for that.

“I take that very seriously, that a teacher will talk like that to their students,” she said. “And for these kids to go into the classroom, and be traumatized and continue with this type of nonsense is really ridiculous.”

The “N-word” has never been part of my vocabulary and I detest its use. However, I wasn’t in that classroom and so I don’t know what the teacher said, or in what context, but neither was the mayor or Brenda Penn-Williams. So let me offer an idea. Let’s let there be a complete investigation, and only after that, decide if someone has committed a crime. And let’s allow only the prosecutor, not people who are understandably emotionally affected or people trying to appease a political following, to make that determination.

Isn’t that the way any of us would want to be treated if we were the accused?

I agree, with the above comment. Let’s let those in charge, look into what and how it was stated. Let’s not have a trial and lynching by the public in the media.

Inappropriate? yes. Illegal? When free speech, no matter how vulgar, is treated as a crime, I feel we are lost as a nation. Wouldn’t the Democrat philosophy include presenting this person with a more civil plan to live instead of public lynching?

From what my child told me, the teacher was explaining to her students why the word is unacceptable, and that just because friends happen to use it to refer to each other as “slang”, it is never appropriate.
According to the Hour, she has resigned. Apparently, in Norwalk you are guilty until proven innocent.

I heard an account that is very similar to what your child told you, also from someone who was in the classroom, but the district may have been determined that this person would have to leave, regardless of fairness. Because superintendents have contracts that must be renewed every few years and politicians need be reelected, I can see where community and political pressure may have won over fairness.