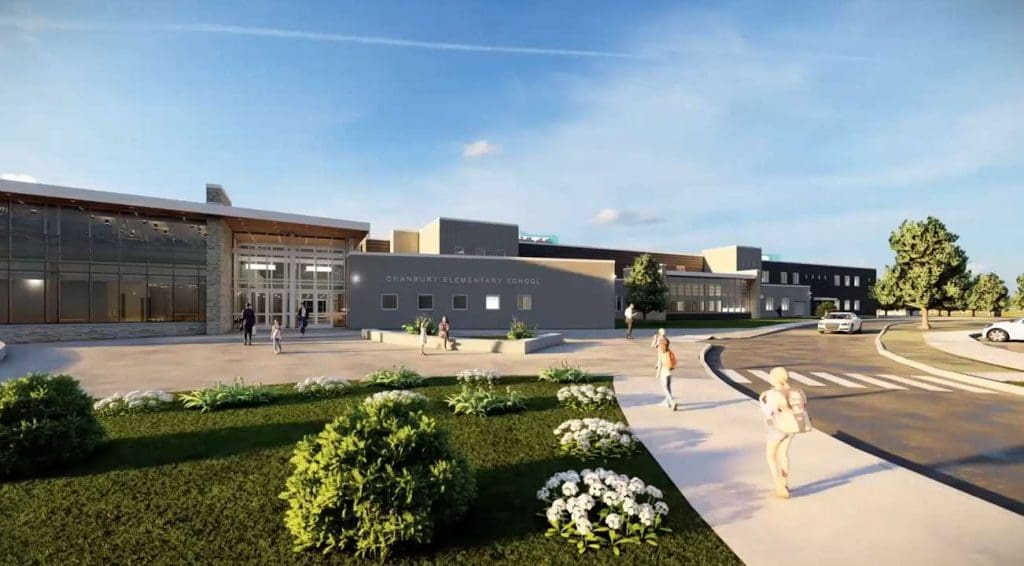 A rendering of the proposed new Cranbury Elementary School, shown to the Common Council Land Use Committee in July by Michael LoSasso of Antinozzi Associates.

NORWALK, Conn. — Cranbury Elementary School got the green light it needed Thursday, allowing City leaders to move ahead with the plan to build a new school building on the 33-acre Knowalot Lane property.

The Zoning Board of Appeals voted unanimously to award the City the variance needed to position the new building closer to neighbors than zoning setback rules allow per special permit regulations, after the City’s legal department cleared the way by negotiating a compromise with those homeowners.

“I think it’s admirable that both sides have worked as hard as they have to come up with an agreement that works for both sides,” said ZBA Chairman Lee Levey.

The neighbors were reasonable and worked with the City, Corporation Counsel Mario Coppola said.

“The approach that we’ve taken is … the applicant is not a developer, trying to get a project done, and it just wants to do just enough to satisfy neighbors to get approval. The neighbors are residents. They are our clients as well,” Coppola said. “And so, the approach that we took, at least from the very beginning of my involvement, was to try to address any and all issues that the neighbors had, regardless of whether they were beyond the scope of what was being reviewed here with the ZBA as part of this variance application.”

He said, “Some of the conditions that are being proposed by the applicant probably go beyond the scope of what we need to do at a ZBA application, but we were more than happy to do it to try to work with the neighbors throughout this process.”

Ninety evergreen trees will be placed on the western property line, in coordination with the neighbors, as screening, Coppola said. The dumpsters’ location has been shifted to the south end of the building, and the tennis courts and half-basketball courts are now planned for the eastern end, within the parent drop off loop.

The building will be positioned 10 feet further north than originally planned, making it about 70 feet from the closest home, a modest improvement from the 68 feet it had been, according to Lisa Yates of Antinozzi Associates.

It’s not quite buttoned up, as Green’s memo of agreement arrived just before the meeting and Coppola hadn’t been able to review it yet, Coppola said. But, “At some point we’ll be able to iron out any further any further details with the neighbors.”

ZBA members voted to include conditions tailored to handle that glitch.

“I think that (the City has) pretty much done what we really wanted them to do. And they have gone way beyond that. They’re at the point where the neighbors are relatively content, and we do have something that we could frame our approval around,” said ZBA member Andy Conroy, who had been the sharpest critic of the application.

The City seeks to begin construction next fall and needed ZBA’s blessing before Nov. 27 to allow time for the other steps in the process, Building and Facilities Manager Alan Lo had said.

“I know it was contentious, or seemed to be contentious, a couple of weeks ago,” April Wennerstrom said. “… This is what community is about, for our children, for our future. And I know there was a lot of work done on both sides.”

Pamela Schneider Young said she’d listened in on the last virtual meeting and was “really amazed and impressed at all the work that’s gone into making all these accommodations for those couple of homes that, you know, obviously have some concerns.”

“Going through this whole process. I think that we’ve come up with some, some good solutions here,” Chris Cascio said.

Lo said, “I’ve been a city employee for 39 years. We are committed to do everything that we said.”

The way a city should work! Open transparent discussion among all parties involved.Compromise and respect for residents and tax payers.Let’s keep this the model of school construction going forward. Transparency, compromise and accountability to tax payers!

An obvious question is why City leaders are keen on building a new school at the very northern edge of the City where the population is spread out in suburbs with relatively few nearby students when the population growth is concentrated in the SoNo areas. Those concerned about global warming seem unconcerned about the dozens of buses idling amongst the trees.

Less obvious is why City leaders, residents and especially parents seem unconcerned about the data on the CT Education Department website showing the majority of City graduating students neither meet CT Edu standards on maths and sciences nor ever secure 4 yr college degrees. Especially when we’re surrounded by school Districts where virtually every graduate meets such standards and secures a 4 yr college degree if not more. Maybe the story is since we’re paying $300k + for a Supt – tops in CT – we’re doing the best we can because Norwalk is Norwalk. Old timers remember the story was different a few decades ago when the City schools were strong performers. Times have certainly changed.