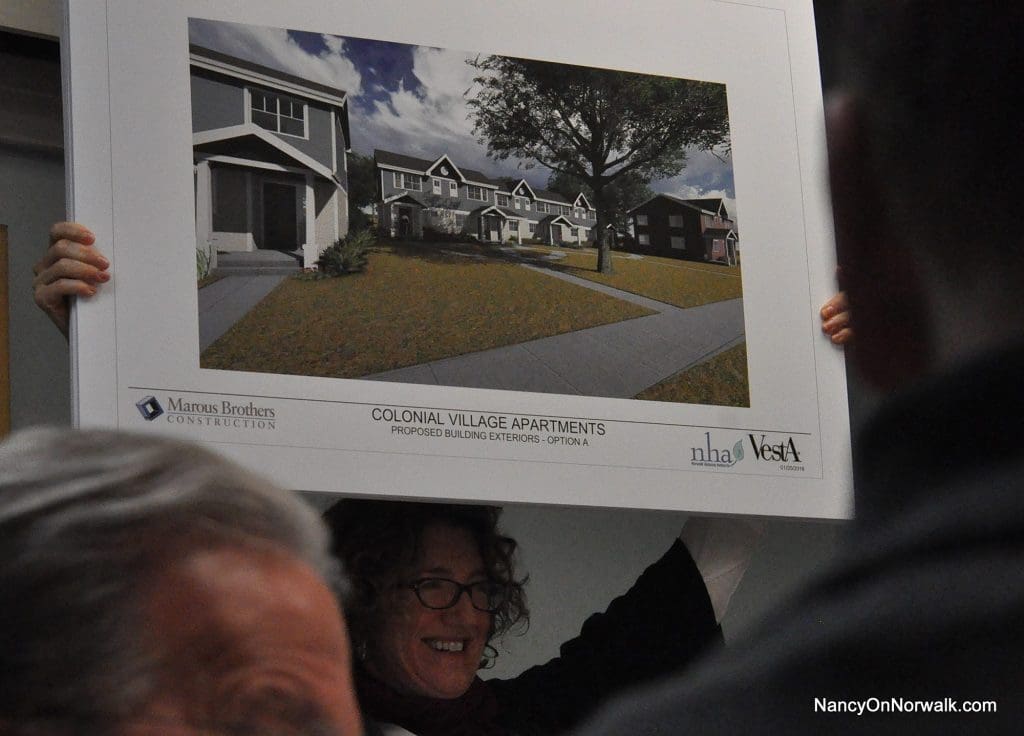 Vesta filed the suit in January 2018, claiming a “bait and switch” move subject to a Connecticut Unfair Trade Practice claim and seeking $18 million in damages. The lawsuit claimed the Norwalk Housing Authority hired Vesta to redevelop Colonial Village, a lead contaminated low-income housing project, only to terminate the agreement without cause after Vesta had invested time, energy, and “extensive proprietary information.”

Former Republican State Representative candidate John Flynn alleged recently that the suit was settled at a cost of $18 million to the Housing Authority.

The suit was settled in November. Vesta’s Attorney, Richard P. Weinstein, declined on June 24 to reveal the terms.

Norwalk Housing Authority Executive Director Adam Bovilsky on Friday got back to NancyOnNorwalk with this statement:

In addition to wrongful termination, Vesta’s lawsuit claimed that the Housing Authority was covering up regulatory violations and was immoral, oppressive, unethical and unscrupulous.

“Colonial Village has millions of dollars in surplus funds collected over the years which was being used by the defendant not only for the Colonial Village project, but also for other non-related Colonial expenses of the defendant which is in violation of pertinent regulatory restrictions and limitations which mandate that the funds can only be used for the subject project,” Weinstein wrote in a May 9, 2018, court document.

“Plaintiff had to propose a refinancing for Colonial Village to take into consideration these excess funds and then try to achieve a certain excess cash flow to meet the request of the defendant and have same approved by federal authorities.”

“Colonial Village is a lead contaminated site which will require extensive environmental cleanup of several million dollars,” Weinstein wrote. “… Colonial Village failed a site assessment by HUD {United States Department of Housing and Urban Development} and plaintiff performed work to correct the violations although no work has been done on the environmental issues.”

There’s no indication online that Vesta ever produced evidence to support these claims. NancyOnNorwalk on Saturday asked Bovilsky if he would deny them. He did not.

He did explain that Vesta has no interest in Colonial Village after the settlement.

John Mosby has lost the appeal he filed against the Norwalk Board of Education and the City of Norwalk.

Mosby was leading a group of retirees in challenging changes to their retirement medical insurance coverage, claiming that the BoE and the United Public Employees Union (UPEU) breached the terms of their collective bargaining agreement.

State law unambiguously states that the serving process is different for a school district and a school board, the court states.  Constable Ernie Dumas served the Superintendent’s executive secretary. He should have served the City Clerk. As a result, there is no legal basis to proceed, the Court said.

“I am happy to report that the Law Department was able to successfully represent the Board of Education in this matter,” Deputy Corporation Counsel Jeffry Spahr wrote Friday to the Board of Education. “In addition to obtaining a favorable decision I believe that our representation of the Board saved the Board tens of thousands of dollars in legal fees .”

Mosby was self-represented and did not present a legal reason to overturn the lower court’s decision, the Appellate Court said.

Mosby has represented himself and lost in multiple lawsuits, which Spahr has called “frivolous,” vowing in April to collect court costs.

As a union leader, Mosby filed more than 50 complaints with the state Labor Board, all unsuccessful. Nonetheless, they cost time and money to defend, as then-Superintendent of Schools Ralph Sloan noted.

Mosby said he won a 1978 Connecticut Supreme Court case and that decision is benefiting workers today.

The Norwalk NAACP awarded Mosby a Lifetime Achievement Award last year. “In 1978 he fought for equal pay for men and women and went all the way to the Supreme Court in Connecticut and won,” according to a speech written by Shirley Mosby for the NAACP award ceremony.

Redevelopment: Why isn’t this case in Stamford?

As you may recall, Norwalk real estate broker/provocateur Jason Milligan, under his IJ Group LLC,  filed a lawsuit in April against the City of Norwalk, The Norwalk Redevelopment Agency, Harriman Associates and the Regional Plan Association (RPA), seeking to invalidate the recently approved neighborhood plan for the Wall Street-West Avenue area.

It’s one of multiple lawsuits involving Milligan, who is being sued by the City and Redevelopment Agency over his purchase of POKO properties that were slated to become part of the Wall Street Place development. He’s also suing Wall Street Place owner Citibank over an easement behind the Fairfield County Bank buildings.

In June, the City was removed from Milligan’s Wall Street-West Avenue suit.  The case continues against the other defendants.

“I never received an explanation as to why the lawsuit was withdrawn against the City only,” Callahan wrote. “I just assumed that IJG did not want to respond to my discovery requests or was trying to avoid having its case transferred to Stamford (which I believe will occur either way). Maybe there is some other reason. It would be an interesting strategic move to get me out of the case given that I have been involved in the Stamford lawsuit for close to a year now.”

Fay did not respond to emails asking about the lawsuit, but in an email to NoN, Milligan had this to say:

“The issue is with the Agency. The Agency illegally approved a Redevelopment Plan. Several people committed fraud in the process. The City under this administration has done plenty of idiotic things but they were not involved with approving the 2019 Redevelopment Plan.”

On July 9, the remaining defendants filed a motion to transfer the case to Stamford, maintaining it belongs there. They cited the pending motion to dismiss the Stamford case on the grounds that the Land Disposition Agreement was based on the 2004 Wall Street Plan. Milligan contends that plan was replaced by the one approved in March.

The defendants further maintain that since there have already been 10 days’ worth of evidence presented in Stamford that would likely need to be repeated in Bridgeport, allowing both cases to proceed separately would waste resources. Milligan is well aware of the issues in the Stamford case, according to the defendants, who add that transferring the case is necessary to “avoid an appearance of venue shopping.”

Again, Fay did not reply. Milligan in his reply referred to her location, with offices in Danbury and Bethel, and to Corporation Counsel Mario Coppola.

“Bridgeport was my attorney’s choice,” Milligan wrote. “It is more convenient for her. It should not be an issue since it is much closer for the numerous attorneys coming from the Hartford and New Haven area including (Coppola).”

Seems reasonable for Milligan to drop the City in this law suit. After all RDA is technically not part of the City government, and RDA and their selected consultants provided the City with misleading information.

Sadly City officials then relied upon this misleading information to approve the Plan despite evidence which clearly refuted RDA’s claims. I can see the confusion but it would appear that the primary issue is with RDA and their consultants.

Seems the City was duped as well.

The good part is that we, the taxpayers, will not be involved with, or have to pay for yet another of these endless, RDA caused law suits.

I beg to differ with you. The city/ and all tax payers- will be paying/ Subsidizing POKO for decades.

Total agree with you. I was just making the point that this will be one less law suit that the taxpayer will not have to pay for.

Interesting choice to use the word “attack”. I would have thought the more neutral word “challenge”, would have sufficed.

Thank you, Nancy & team, for keeping us informed of these matters.