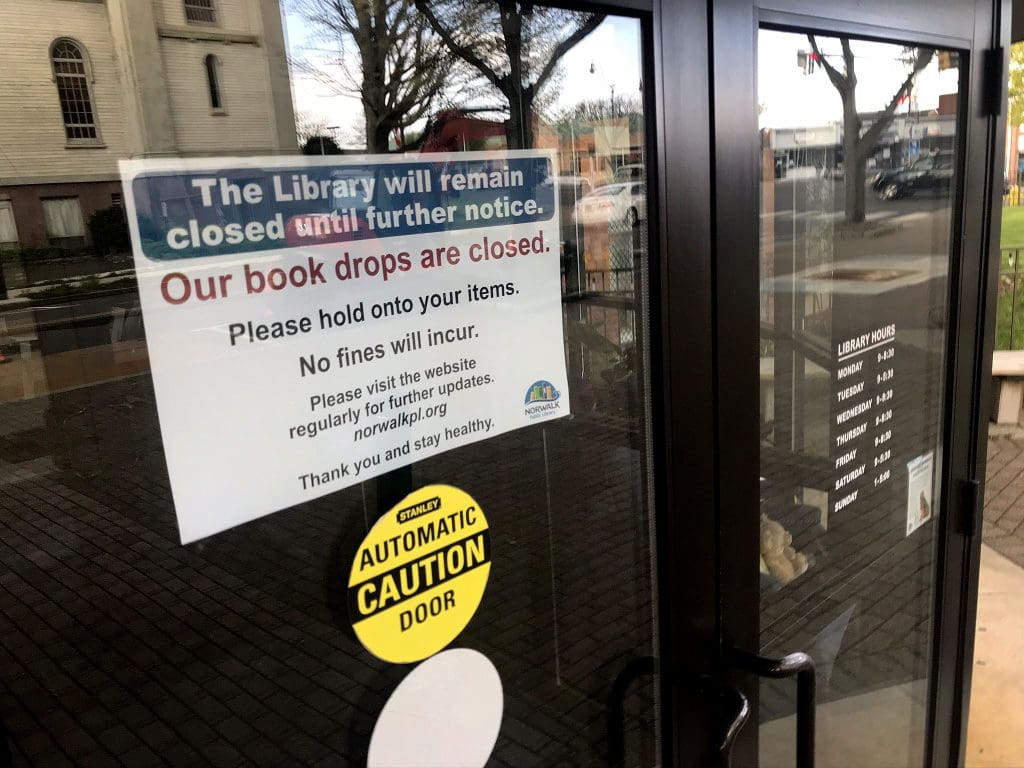 The are more than 13,000 library books out in the Norwalk community now, that will need disinfecting, Norwalk Chief of Social Services Lamond Daniels said Thursday.

NORWALK, Conn. — While no patrons are currently allowed inside of the library, the Norwalk Public Library Board detailed plans for a phased-in, gradual reopening as well as future projects.

Norwalk Chief of Community Services Lamond Daniels, who oversees the library, said Thursday that they are following both city and state guidelines for moving toward some type of reopening. That reopening will not take place during this first phase, which includes outdoor dining and university research centers, that begins next week.

“May 20th is not—we flip a switch and everything is on,” Daniels said to the board on Thursday. “Whatever we plan this week, next week it may have to change.”

The library, which has been closed since March 13, is looking at options such as a curbside service for picking up and returning books, before people can return to the building.

The library will also be looking at limiting access to the physical structure through appointments and/or limited hours by population, such as a time for seniors and a time for teenagers so the different age groups can avoid interacting.

Daniels said that the space inside the library would have to be “redeployed” to allow there to be social distancing protocols in place for the foreseeable future.

Christine Bradley, director of the Norwalk Public Library, said they’re starting to get “into the nitty gritty of this.”

For example, Bradley said she would love to allow people to sit outdoors at the library and access the WiFi, but asked what type of cleaning measures would be needed to make sure tables and chairs are wiped down after every patron.

“We have outdoor space we can use that’s pretty pleasant,” she said.

The team is also putting in place measures for what do with books when they are returned to make sure they’re properly disinfected. Daniels said that there are over 13,000 books out in the community right that they would like to start getting back to disinfect before recirculating.

Bradley said they’re waiting on news about summer camps and programs before committing to where the library’s pop-up vehicle could be deployed.

“We’re a little concerned about showing up in a neighborhood—we have a big backlog of ‘Norwalk Reads’ books, we could make packages of books and give them away through the popup—but we’re concerned about big crowds forming,” she said. “I really love that idea of packaging up—like a family meal—a family book. We’re anxious to get that on the road.”

Daniels said that they need to figure out how to “strike a balance” between making sure the public feels safe to come to the library and keeping everyone distant enough to prevent the spread.

“We all know that libraries are places where people socially interact,” he said. “We’re going to have to figure out what does all of that mean.”

Bradley said that they’ve ordered personal protective equipment, including masks, gloves, and hand sanitizer stations, for the library staff for whenever they do reopen.

“There’s really a lot of detail to work through before we start implementing these phases,” Bradley said. “I’m not as worried about the return of the books as I am about curbside pickup.”

In the meantime, both Daniels and Bradley said that the library staff have continued to work, both in providing online services and being redeployed to areas of the city that need assistance.

“We’ve called upon the library staff to help in many ways,” Daniels said. “These times require us all to jump in and help our fellow persons.”

The library will receive $1.57 million for “expansion architectural” renderings, according to the Common Council-approved capital budget.

“Let’s just say that the best news for the construction project is that the money for the second phase of architectural design was approved in the capital budget by the Common Council on Tuesday evening, and it’s under the economic development department,” said Alex Knopp, chair of the library board.

In 2018, the Norwalk Public Library launched a strategic planning process to guide its redevelopment which aimed to “modernize the library’s space.” In June 2019, the library board approved a building plan that called for an approximately 60,000 square feet building “designed to accommodate existing and new uses of the library.”

In order to complete the expansion, the library would also need to acquire the neighboring property of 3 Belden Ave., which is currently owned by the First Taxing District.

“I think the city is still working with the First Taxing District about the terms of the property relationship and that’s all I have to say about that,” Knopp said.

The library was also budgeted $188,000 for non-construction related activities including $70,000 for laptop dispensers, $50,000 for Norwalk newspaper digitization, and $68,000 for auditorium refresh.

It is very difficult to be critical of libraries.They are sacrosanct. I do not know how Norwalk is set up, but next door in Stamford it is 99%+ publicly funded yet set up as “independent”. The Stamford system was run by a person,a cult of personality, for decades with a very heavy hand. They have a huge unfunded pension obligation…one of those hidden deficits few know or care about until the bill comes due.
My point? Be careful. From Long Island to Mexico City libraries can suck the finances dry with nary a peep from the powers that be until it is too late.