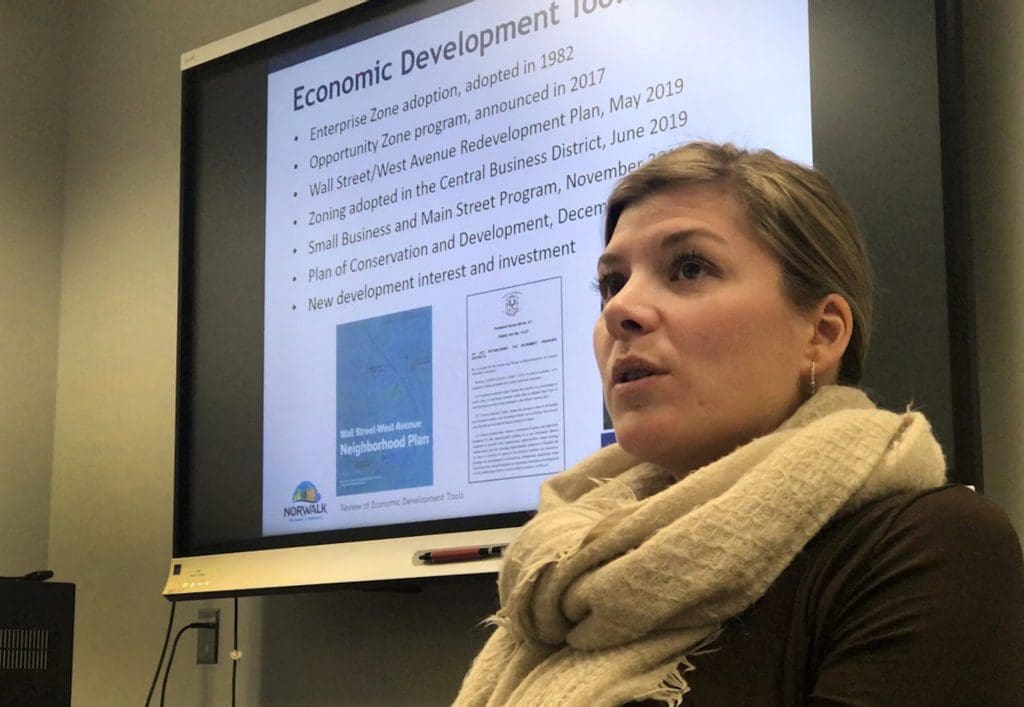 “We’ve been out talking to a lot of people and these programs, really are a response to what we’re hearing on the street, what people need and how they need it,” said Casey, Norwalk Chief of Economic and Community Development, to Common Council Planning Committee members Thursday.

The Enterprise Zone that was established for South Norwalk in 1982 would expand to the Wall Street-West Avenue area, in a process likely to take about six months, Casey said. The Tax Increment Financing District (TIF) would take about two years to enact.

“An enterprise zone is a designated geography in which taxes are abated as of right for a period of 7 years to encourage new development and business growth in underutilized areas,” Casey explained in a memo to the Committee.

“As of right” means that property owners don’t have to apply for the benefit. If they’re meeting the criteria it is awarded to them without question. The tax abatements apply only to the improvements, meaning that the base property tax is not diminished, and the abatement is reduced gradually over the seven years.

To qualify as an Enterprise Zone, the census tracts in an area must be zoned to allow commercial or industrial activity and meet at least one of the following criteria:

Again, the census tract must meet one of those three criteria; Casey said she was sure West Avenue-Wall Street qualifies.

Council member Tom Livingston (D-District E) questioned whether South Norwalk meets those criteria. Doesn’t matter, Casey replied. Once you have an Enterprise Zone it remains an Enterprise Zone until the City ordinance authorizing it is amended.

The new Enterprise Zone area must be contiguous with the existing area, as you’re expanding the geographic district, Director of Community Development Planning Tami Strauss explained.

“We don’t lose any of the existing tax-based revenue,” Casey explained. “A lot of a lot of folks feel very strongly about tax abatement programs because they say that the city is losing the taxes or they’re not getting the taxes, right, which really is not true because you’re always getting the base tax that you would have received before and then you’re actually getting that percentage of the incremental tax that’s coming in.”

It can be layered over other incentives, including the federal Opportunity Zones.

Casey and Director of Business Development & Tourism Sabrina Church presented some information that appeared inconsistent with that obtained recently by NancyOnNorwalk: they said there have been four Enterprise Zone beneficiaries since 2007.

On Thursday, Livingston explained that when the Enterprise Zone came up for consideration two years ago, Council members objected to the “as of right” characteristic because they were worried that plans that are already in progress would benefit from the abatement.

That led to a controversial proposal for an Innovation District, which was not mentioned Thursday.

“I don’t know if we can grandfather it or cut people out if they already have something on the books,” Casey replied, touting the $7 million added to the Grand List with the four projects, in comparison to a $1.3 million tax abatement.

This omits The SoNo Collection, which has a different tax abatement, negotiated by the Council. Rather than the incremental ramp up to a full rate, the mall is paying half of its entire bill for seven years. Although a 2017 press release said the mall would generate $2.5 million in tax revenue yearly over its first seven years, the actual dollar figure depends on a tax assessment that is currently underway and on the mill rate that will be set by the Council next Spring, Chief of Staff Laoise King said in October.

The only caveat on the Enterprise Zone tax abatements is an affordable housing component, Casey said, calling it the “200% clause.”

City ordinance specifies that if a developer rents a housing unit to someone who makes 200% or more of the median area income, they lose their Enterprise Zone abatements. Developers therefore don’t seek the abatement, Norwalk Redevelopment Agency Senior Project Manager Susan Sweitzer said in March.

“They can build housing till the cows come home, but they don’t They don’t get the benefit if they don’t meet that affordability criteria,” Church said Thursday.

TIF
Rilling in August 2015 spoke of a Wall Street area Tax Incremental Financing (TIF) district. It was listed as a priority for the mayor’s office in the 2015-16 budget documents.

The Planning Committee rejected it in 2016 because “it gave no benefit to smaller properties or small businesses other than indirect benefits,” but the State has since adopted new legislation, Casey said in her memo.

The “more user friendly” legislation has made it popular and 12 Connecticut communities have adopted a TIF, she said.

“When I worked with the Kennedy School, I worked with 35 largest cities across the US and almost all of those cities have either had implemented some sort of TIF district or a DIF District, which was a district financing, district incremental financing, which is essentially the same thing,” Casey said. “And basically, what happens here is that it’s a public financing method to capture the growth in the neighborhood to be able to subsidize local district improvements that will help to then catalyze other projects.”

Again, the base property tax paid to the City does not decrease. But in this case, if improvements increase the tax bill, the increased amount goes into a special fund, not the City’s general fund. That money is used to help the district in some way.

Again, there are criteria: “It needs to be an area that is substandard or has deterioration… you would implement a TIF in an area that has slated growth or that you know, growth will come, because the TIF is funded through the growth that happens,” Casey said.

Only 10% of a city’s total area can be included in a TIF so the designation needs to be made thoughtfully, she said.

Straus said the West Avenue-Wall Street area has a blight determination and alluded to an ongoing lawsuit, explaining, “The way that we arrived at those determinations is being questioned right now. But state statute leaves it very open to interpretation in order to make it easier to have these kinds of tools and incentives.”

Wall-West is eligible for a TIF due to the recent approval of the Wall-West Neighborhood Plan, Casey said.

Cities have much flexibility in determining where the TIF revenue goes, Casey explained, listing wastewater enhancement, reconfiguring an intersection or historical lighting as possibilities. It could be a 25-year TIF or a 10-year TIF. The ratio of what goes to the City can be tinkered with.

Groton used the fund to provide incentives to developers, she said.

“I’m trying to figure out what the advantage is to Norwalk because what you’re basically saying is we need to force ourselves to set aside a certain amount of funding for this district that we can’t do without this,” Livingston pointed out.

Casey agreed, money could instead be earmarked.

“What this process allows us to do is it allows us to say, how many parcels are we talking about? What do we think the potential growth for the area is? What do we actually want to prioritize as a community? And then how are we actually paying for that right and ensuring that the money is there over time to be able to pay for those infrastructure improvements?” Casey said.

Norwalk would hire a consultant to guide the City through the process and, “We’ve been working with Connecticut Main Streets just to learn about how other communities have done this and what they’ve done and how they’ve done it.”

The consultant’s work would likely take a year, and then it would go to the Planning Commission to make sure it’s aligned with the Plan of Conservation and Development (POCD). The Council would then have a public hearing and a vote.

Casey was given a green light to work on the plans.

The recommendation “seems like a well-rounded plan that kind of covers all the issues and all the needs we have in the district,” Planning Committee Chairman John Kydes (D-District C) said.

Casey alluded to the reorganization of City government, which created a layer of “chiefs” in a Mayoral cabinet, in explaining how the recommendations came about.

“The public processes that we’ve done through the East Ave. TOD (Transit Oriented Development) and also the POCD and even the MLK corridor has just been so incredibly helpful for the team to be able to think about economic development tools,” Casey said. “This is really the first time for the for the city to have the Chief role but also Business Development- Tourism in house in City Hall. But it allows us to be able to bring together our budgets and think creatively about that… I think with the partnership with the Redevelopment Agency and continuing to work with them, we have the ability to kind of implement these tools, like we haven’t implemented them before.”

Did Casey seriously just commend the mayor for hiring her (and give herself a big pat on the back)?

While all this pie in the sky thinking is going on, Real world economic development is being stymied, locked down and litigated. It seems that using your own money, enthusiasm, beautification efforts, don’t fit the narrative of more government control!

While all this amazing thinking and dreaming, self congratulatory committee meeting “work” is plodding along, real city dollars are flying out the window in law suit after lawsuit! Suing the one person who is single-handedly making the Wall Street area actually better!

Honestly Norwalk, what you really need to do is to get out of the business of suing and into the thinking of encouraging the entrepreneurial spirit of the real doers!

If you think education is expensive now, create a TIF and sit back while you watch million siphoned off into a slush fund to be used by politicians and bureaucrats. Home owners will be the ones to make up the difference.

Anyone who would like to learn more google Chicago and TIF. There is a wealth of information on the subject.

I guess our ELL program is helping cultivate an enterprise zone

“The public processes that we’ve done through the East Ave. TOD……………………has just been so incredibly helpful for the team to be able to think about economic development tools,” Casey said.

Does anyone have an inkling of an idea of what that means?

If implemented with full community (stakeholders from all the neighborhoods) participation, Sabrina is a “breath of fresh air” in Norwalk’s “Planning” activity.

I am curious to see how East Norwalk will qualify for this TIF. East Norwalk was mentioned since the City doesn’t want to blow the 10% on West Ave and leave some for East Norwalk. What criteria does East Norwalk qualify for? East Norwalk is already a vibrant, working, family oriented neighborhood. Will they claim blight? Destitution? Let’s see what they come up with.

Steve Mann – It means bigger salaries, bigger pensions, bigger cars, and bigger houses for City Hall executives. Run down properties for existing building owners because the property taxes are so high, and rents are so low, that there are no future funds left for maintenance.

Seriously, the one silver lining of 20 years of gentrification is that it should teach us what DOES work:

Let developers build for the local market; don’t force them to build to arbitrary and outdated height limits or parking minimums.

Let businesses thrive – keep them on a short leash, but don’t make it take forever to start a business.

Avoid sweetheart deals for ANYONE involved.

Deal with problems as they arise; don’t try to predict every single infrastructure issue that MIGHT pop up. Just build infrastructure as you need to.

And most of all, don’t screw over PoC. SoNo is vibrant and growing precisely because its amazing cultural diversity is such an attraction.

It’s not that hard. It just requires discipline, vision, compassion, and flexibility of mind. All things lacking in this administration.