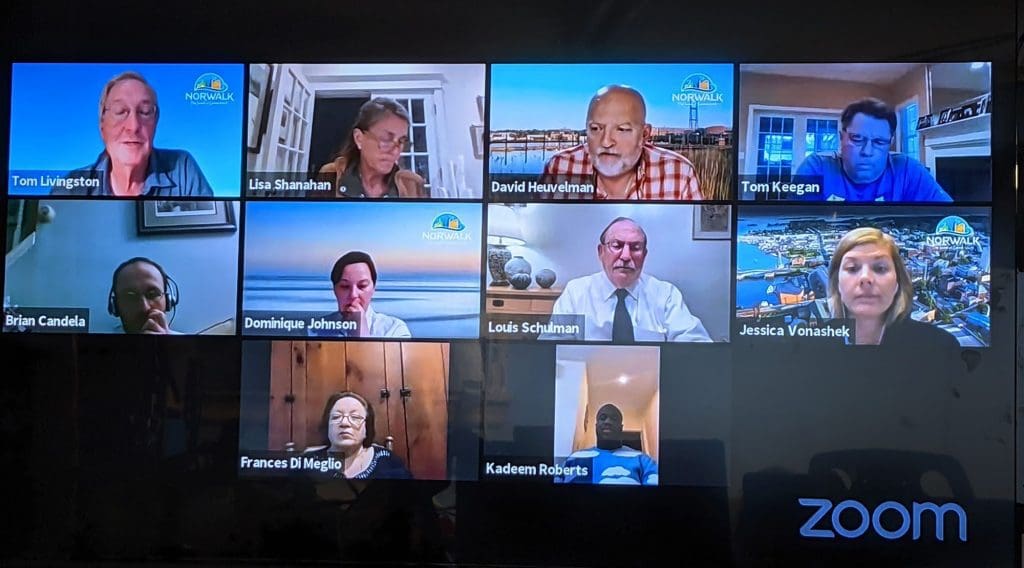 NORWALK, Conn. — Common Council members are looking to turn back the clock to 1988, when Norwalk had a Planning and Zoning Commission – one body, not two.

Well, maybe not go back in time, but the pre-1988 ordinance will be the foundation of a move to merge the two Commissions that exist today, which Council member Tom Livingston (D-District E) suggested were created when the then-P&Z Commission was split for political purposes. Recombining them will be in alignment with the 2019 Plan of Conservation and Development and has the support of the Mayor’s Office, he said at Tuesday’s Ordinance Committee meeting.

Planning and Zoning Director Steven Kleppin told Ordinance Committee members that the merger would likely add one agenda item per meeting to the Zoning Commission’s workload.

Kleppin agreed with DiMeglio that the major issue will be the capital budget process, which can be lengthy and time consuming. A subcommittee could be created to deal with that, Kleppin said.

A historical lookback – was it political?

Livingston began the discussion with an historical overview of the Planning and Zoning Commissions.

“The city had separate Planning and Zoning Commission until 1971, when they were combined, following a charter amendment, and then they were separated again in 1988. So the reasons for combining them today are the same as they were in 1971,” Livingston said.

Diverting from history to express an opinion, Livingston said, “What we’re talking about now is consistent with the recommendations of the current POCD. And it will make the city’s process and zonings more efficient for applicants.”

Moving on to 1988, Livingston said the historical record indicates that they were separated again “for purely political reasons.” He quoted an Hour editorial as saying that it was “hard to ascertain the motives” behind the separation but “one gets the feeling that the reason for the change is not that in the long run, it’ll be better for Norwalk, but to punish the members of existing Commission. We certainly hope that is not being used as a political vehicle by any individual or group. Unfortunately, this situation has become totally politicized.”

The Hour and the Chamber of Commerce argued strongly to keep the Commission intact, according to Livingston.

DiMeglio later countered that perhaps there was a political element to it, but she had always heard that “there was some legal thing that happened that they were directed to, to separate the commission. But, always heard, never checked into it.”

“I saw some reference to the legal department looking into that,” Livingston said, qualifying his conclusion that “there was not a lot of legal issue” as it being based on his research into old editions of the Hour.

In 2014, former Common Council President Ed Lyons told NancyOnNorwalk that Norwalk got called out for dumping of raw sewage into Long Island Sound and had a big dilemma on its hands, leading to the split.

Democratic Former Mayor Bill Collins, in 2014, characterized the split as political. “Developers were eager to be able to put in the big box stores” but his Zoning Commissioner made that tough by putting in a two-story minimum limit on all the commercial areas, he said. When he was replaced by Republican Mayor Frank Esposito, the Republicans split P&Z to get rid of those Commissioners and abolish the two-story minimum, over Esposito’s objection.

Lyons said Collins “nailed it” when he said the Council wanted an entire new slate of characters but was way off on the motivation.

“C’mon dude, nobody is even mentioning the lawsuit?” Lyons said.

You can read that story here.

One is the oversight and review of subdivision applications, a “not overly complex process,” Kleppin said. “Norwalk is a very built community,” and there are maybe four applications a year, “really kind of small.”

The “other major task” is to come up with a Plan of Conservation and Development every 10 years, he said. While that’s time consuming, it’s only every 10 years.

The Commission reviews potential improvements to municipal property before they go to the Common Council, he explained. And, “The one thing that’s kind of unique and I think it’s a good thing for the city is the ordinance tasks the Planning Commission with looking at the capital budget and the capital requests that come from the various departments to see if those requests are in line with the citywide plan.”

This would probably add three meetings to the Zoning Commission’s workload, he said. A subcommittee could handle the departmental requests and the public hearing would be the entire Commission’s purview.

DiMeglio said that this year’s capital budget process had gone much quicker for the Planning Commission. “It was a little more, you know, on point.”

Support for one Commission; concern from Schulman

Kleppin said that if the Commissions were merged, “I think there would be a clear understanding of alignment between the city-wide plan, as well as what the applicant is requesting.” There would be cost savings for applicants as they would spend less time presenting their plans and therefore pay less for attorneys and other representatives.

“When we look at the Plan of Conservation Development, which was passed in December 2019, there are a number of different goals and objectives that are laid out there,” Norwalk Chief of Economic and Community Development Jessica Vonashek, formerly Jessica Casey, said. “And one of them is a zoning study that Steve is currently leading. One of them is the industrial study that he’s also leading.”

DiMeglio said she supports a merger because “I think is coming together as a whole and seeing the whole picture of what’s happening. weighing different things, I think is a positive.”

So creating a subcommittee would alleviate stress on the entire commission but not on those members, and there needs to be a plan to “enrich” the joint Commission in seven or eight years when a new POCD is needed, Schulman said.

“I think as Steve has pointed out, we’re already meeting somewhere between 20 and 30 times a year,” Schulman said. “Most of our meetings will run three or four hours. More recently, we’ve been limiting them, so they don’t go too late into the night because I think we all agree that that affects the quality of the decision making and again, the decision making is, is key to what we do.”

Livingston suggested that Vonashek, Kleppin and the City’s legal department come back to the Committee next month with a proposal, “recognizing how much we don’t want to overburden our already burdened volunteers…. I would suggest probably starting with the pre-1988 ordinances as a starting point.”

Any study involves members from both Commissions, Kleppin said.

Shanahan had begun the discussion by saying, “I remember my first day on Council, Tom said this was something he’s been thinking about for a long time, to streamline the land use processes as well as to lighten the load of our very competent and very hard-working volunteer commission members.”

“I’ve been thinking about this, along with others, for a number of years,” Livingston said. “And now with the recent completion of the POCD and the support of the Mayor’s Office, it seemed an appropriate time to move this forward, at least have the discussion.”

….anyone who wants to get the whole picture needs only pay attention and get it by reading minutes or attending or talking with someone.

Lisa Shanahan wins the all around politician award for 2021…we can improve our efficiency, she says, ….and I guess get more out of all the money they are not spending on those volunteers? 2 women can’t have a baby in 4.5 months. 4 hour meetings will have to be 6 or 7 or multiplied…it’s a bad idea being spearheaded by people who don’t have good intentions.

As I said on the original mention of this…Being on either the Planning or Zoning Commissions is a lot of hard work. Unfortunately, most never do that work, they simply show up to rubber stamp or make political points. Combining them would make the amount of work virtually impossible, but it would make the cronyism and rubber stamping much simpler. Any citizen should oppose making corrupt politician’s lives easier.

There is so much “tell” from this story. If only the average Norwalk resident could read the tea leaves.

How rich is the statement – “for purely political reasons.” I’ve been in Norwalk for only 28 years – and I have never had to endure a “purely political” administration before the one delivered under Rilling. He is – unquestioned – the most “political” mayor in our last 50 years. 14-1. Two years in a row. You bet he thinks he’s Caesar. Brutus is currently representing the Greeks of East Norwalk – if that.

Say again how this benefits the residents? The Tax paying residents – you know – the electorate?

It makes it easier for (certain) developers – and saves them money. Terrific.

It probably doesn’t help (maybe more) one local developer – Milligan – actually taking a long term, skin in the game, investment and build focus in the city. I suspect that the well-known “bully” culture lead by the legal department won’t be able to control themselves. Harry shrugs. AND – the city continues to sue him.

BUT – I do see a whole ‘nother bunch of campaign contributors who win the developer ROI threshold long before a shovel is in the ground, because they have tax abatements, fees, gifts, and city paid for infrastructure that should be on their dime. They will get velvet rope treatment – there might even be a “Liz Suchy room”, and behind it all – friends & supporters will find the process quick, efficient, and the opposite of curious.

David McCarthy might be south – but relative to vector – he stands right on top of this issue. It’s intended to help the wrong people do the wrong things. I believe this issue alone is enough to remove any common council member who votes for it