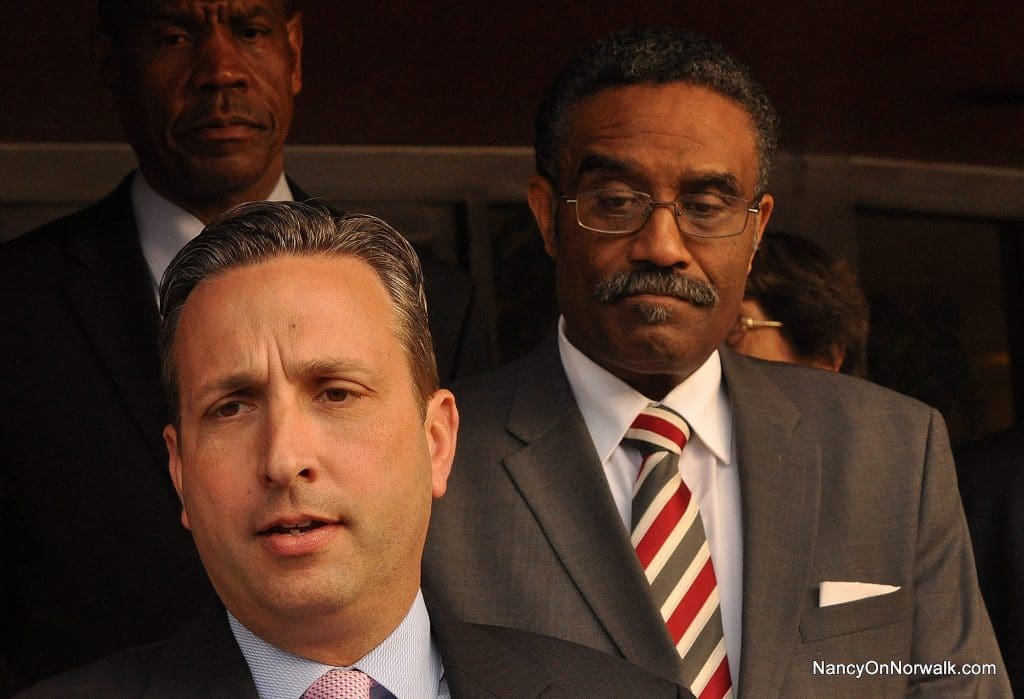 NORWALK, Conn. — Norwalkers are being recruited for a Wednesday expedition to Hartford to try to get Norwalk Public Schools better funding from Connecticut.

Norwalk is “shortchanged at least $20 million a year,” through the state’s Educational Cost Sharing Formula (ECS), Board of Education member Mike Barbis said at Monday’s Democratic Town Committee meeting. “… There’s a big hearing on Wednesday and people should go speak.”

This latest development in the ECS plotline stems from the lawsuit filed by the Connecticut Coalition for Justice in Educational Funding (CCJEF). Judge Thomas Moukawsher in September ordered Connecticut to reform its ECS formula; the state filed an appeal but the state legislature knows the pressure is on.

“There’s not much in Bob Duff’s bill,” Barbis said. “But it looks like there’s not going to be a major overhaul of ECS, I am told, there’s going to be an adjustment.”

The entire text of Duff’s bill is, “AN ACT CONCERNING THE DEVELOPMENT OF A MORE EQUITABLE EDUCATION COST-SHARING GRANT FORMULA. To develop a more equitable education cost sharing grant formula.”

Duff, in an email, explained, “The bill is purposely vague in order to bring a diverse set of groups who care about education funding reform to the table. SB 2 is a call to action to have those discussions in order to find the best solution.”

There’s a feeling out there that “Fred’s bill” is better.

The bill is actually co-sponsored by State Rep. Fred Wilms (R-142) and State Rep. Bruce Morris (D-140), Morris had to point out Monday to DTC members.

A Feb. 3 press release from Wilms, which did credit Morris, explained:

“H.B. 6793, ‘An Act Concerning the Distribution of Education Cost-Sharing (ECS) Grant Funds and the Granting of Waivers According to a Town’s District Reference Group (DRG).’

“Since 2006, The Department of Education has classified all 169 Connecticut towns into nine District Reference Groups, with letter rankings A through I. Towns ranked A face the fewest stresses while towns ranked I face the most. Seven variables determine a town’s DRG rankings: median family income, parent education levels, parent occupations, family structure, the percentage of students eligible for free/reduced price meals, home language and district enrollment.”

Morris told DTC members that the bill offers a “carrot” to small towns, the elimination of unfunded state mandates.

The reason ECS has not been reformed is because you need 51 percent of the votes in the legislature to do it, and, “Because there’s a large amount of small towns there has to be something in it for them. Otherwise, there’s no interest for them to vote in our favor,” Morris said.

“We are hearing some objection to that in regard to the CCJEF vs Rell decision and whether grand list really has to really be part of equation,” Morris said. “We are contesting, and working through that… certainly among House Democrats and among others this is a year where everyone really does want to work towards doing it.”

“That isn’t flying too well so I think the ECS is going to have to be something that is going to be derived from the House and the Senate at the end of the day,” Morris said.

Malloy’s proposed ECS reform replaces Free and Reduced lunch with HuskyA to “improve the fairness of how aid is calculated, incorporating more accurate measures of poverty,” a press release from the governor’s office said.

Some locals suspect that won’t favor Norwalk because undocumented immigrant children cannot apply for Husky A.

“There’s conflicting info on this,” BoE Chairman Mike Lyons said in a Monday email. “A group called the Connecticut School Finance Project issued a release saying 2,500 additional Norwalk children would be counted towards the definition of low-income if we switched from those on free and reduced lunch (the current proxy for low-income students) to Husky.  Our own quick check indicated we might even lose headcount.  I don’t know what impact undocumented kids would have on the count; but we need an accurate count before we can get any sense of whether this will help us or hurt us.”

Morris defended Duff’s vagueness, saying that, “We are just going through the hearings” and that bills go through a lot of iterations.

Lyons said, “I’m not up on the arcane practices of Hartford but I was told that Sen. Duff’s bill is something of a placeholder; it’s very vague (in contrast to the more specific proposal in the Wilms – Morris bill).  I am led to believe the placeholder bill can be filled in with content from other bills, so testimony about what folks think should happen to the ECS formula could affect its final form.”

Toni Williams of Connecticut Coalition for Achievement Now (ConnCAN) confirmed that she’s been recruiting people to go to Hartford for Wednesday’s hearing but was not available to provide details of how it’s going.

The Education Committee’s public hearing on bills for review begins at 10:30 a.m. it’s also possible to submit testimony by email.

Lyons sent his written testimony Tuesday to the Education Committee. CCJEF estimates that Norwalk is shorted $23 million a year, he said.

“This is about 15% of our annual budget,” Lyons wrote. “As an urban school system that is 67% minority and with 50% of our students on free and reduced lunches, we have significant challenges to overcome, and underfunding of that magnitude makes meeting those challenges successfully vastly more difficult.

There’s another approach brewing for ECS reform: CCJEF plans to hold a press conference before the hearing to “discuss the need for an Education Adequacy Cost Study as a necessary first step in reforming the Education Cost Sharing [ECS] grant and the education finance system in our state.”

Asked if he’s optimistic about Duff’s bill, Lyons said, “Sen. Duff really didn’t have much to say about his bill when we met with him two weeks ago.  Obviously as Senate Majority Leader he has advantages in moving legislation that other legislators don’t have; hopefully that would help in getting something substantive through.  Things are so chaotic in Hartford right now, though, that it’s too early to be optimistic.”

Morris told DTC members that it’s good to go to hearing, reminding them that several years ago there was an effort to reform ECS that resulted in “a very good” formula, that was then shot down by the Education Committee.

“There is a whole process you go through. Let your voice be heard, send them a letter. … People do pay attention on the emails you get on these subjects,” Morris said.

DTC Vice-Chairwoman Galen Wells said a state public hearing could consume a lot of time; Morris said elected officials have preference in the first two hours but then speakers are chosen through a lottery.

“I can tell you that everyone recognizes that Norwalk is not getting a fair share,” Morris said. “Everyone in both chambers of the House understand that not just Norwalk, but Norwalk and Stamford are the anomaly. So don’t think it’s not being paid attention to. Everyone understands that our grand list is the only thing throwing us out. We are different than every other city in the state and ultimately every time something does happen to try to move this there always has been a specific allowance for us. I would expect that to happen to ECS going forward.”

I am very pleased that Deputy Speaker Morris and I have teamed up on ECS reform for Norwalk. Reform of this magnitude has to be bipartisan. Things move slowly in Hartford but the more we all work together on behalf of Norwalk, the better our chances.

Thank you to the leaders for collaborating together on this issue. That is exactly what we need!