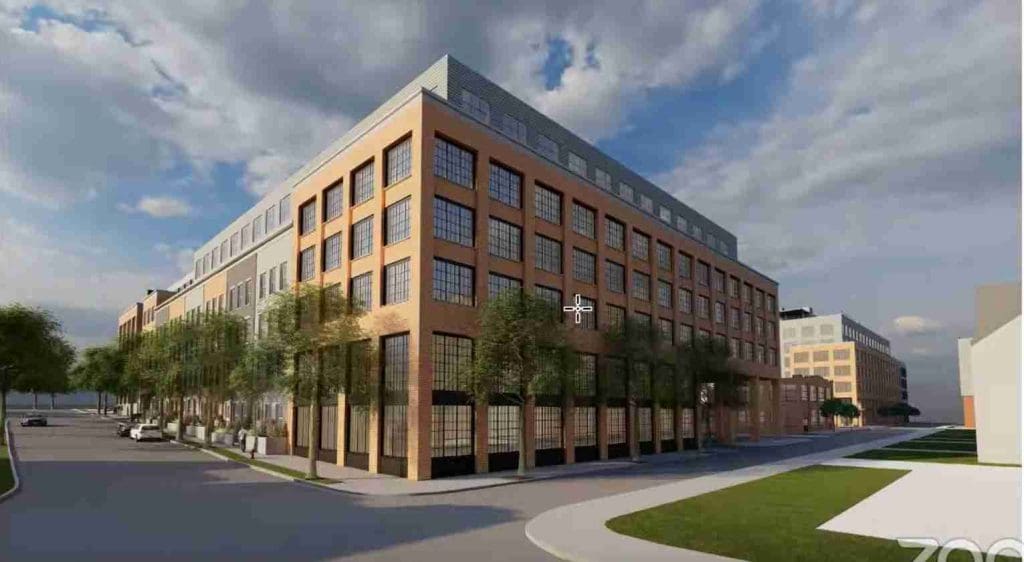 A rendering of the proposed building as seen from Henry and Chestnut Streets.

NORWALK, Conn. — The City is negotiating a deal with Spinnaker Real Estate Partners, a plan to sell the South Norwalk train station’s parking lot off Henry Street at fair market value to Spinnaker and get an equal amount of parking spaces back in return.

“What Spinnaker has put forth is a proposal for 202 mixed-use units at 15-17 Chestnut, combining their site with the train station site to create a larger development pad,” Redevelopment Agency Executive Director Brian Bidolli said at Tuesday’s Common Council meeting. The City land has been appraised at $4.6 million and Spinnaker would receive a $1 million credit to cover the cost of 60 parking spaces in a parking garage: “Actually the difference between the amount of revenue that they would be obtaining from the spaces on the value of that revenue minus the cost of the construction,” Bidolli explained.

“I believe this is a smart project, a project that took a lot of years of hard work to get to this point. And that hard work definitely shows,” Economic & Community Development Committee Chairman John Kydes (D-District C) said, before the Council unanimously gave Redevelopment the green light to refine its drafted Land Disposition Agreement (LDA) for the deal.

It’s a project that’s been working its way through multiple public meetings, from the South Norwalk Train Station Area Study forum in January, stemming from the Transit Oriented District plan developed for the area, to meetings where District B residents were given an opportunity to sound off.

In response to that feedback, architect Bruce Beinfield designed townhouse-like structures along Henry Street, to meld with the existing three-story homes across the street. Upper floors would be stepped back to disguise the building’s planned bulk.

Additionally, the City focused on infrastructure, “making sure that there’s adequate infrastructure to support this and taking a real hard look at traffic impacts. And then, of course, the grant is hugely helpful in that regard,” Biddoli said.

Council member Darlene Young (D-District B) commended Redevelopment’s outreach and called it “a model of the way we should interact with the community when we’re talking about projects that impact neighborhoods of this size.”

“I just want to thank you for humanizing our ideas, our thoughts and what we want to be in and live in. And giving regards to the fact that we want to see our community here, not just industry, we want to feel like we’re home,” said Council member Diana Révolus (D-District B). 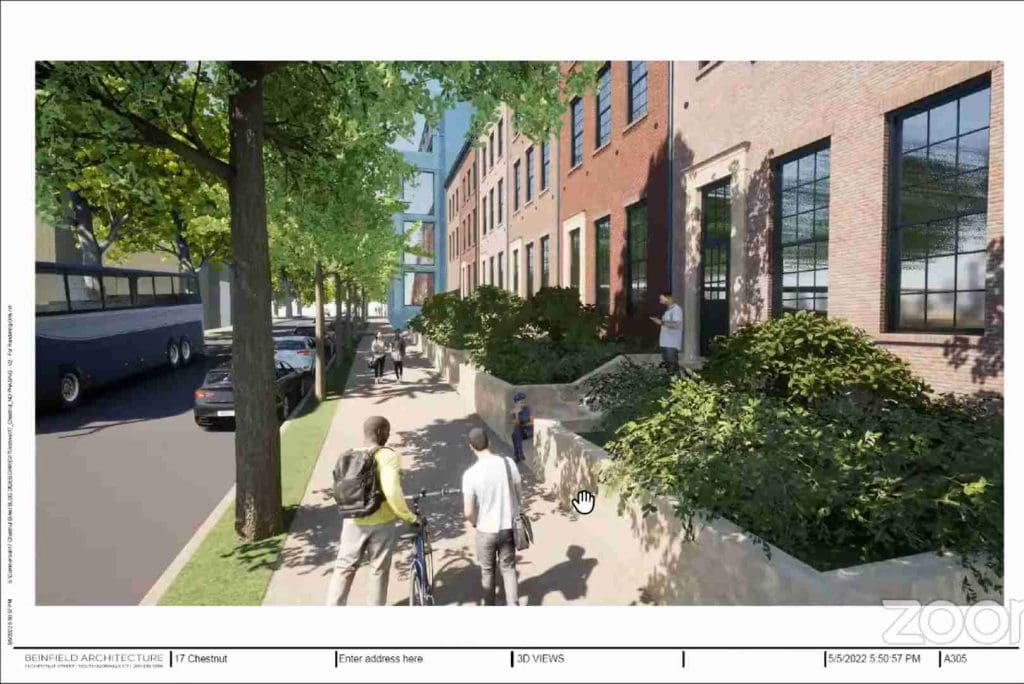 A rendering of the proposed building as seen from Henry Street.

Both Matt Edvardsen of Spinnaker and Beinfield, Spinnaker’s preferred architect, said they’ve been involved with the project for a decade.

“It’s never been closer to reality than it is today,” Edvardsen said at last week’s Economic and Community Development meeting.

Beinfield talked of how embarrassing the area was, “in terms of just dilapidated buildings and the amount of crime that had been generated,” and how he felt inspired by a 2009 report about young adults leaving the area. “I thought that SoNo had the unique qualities to be a place where young people might want to actually migrate to,” he said. 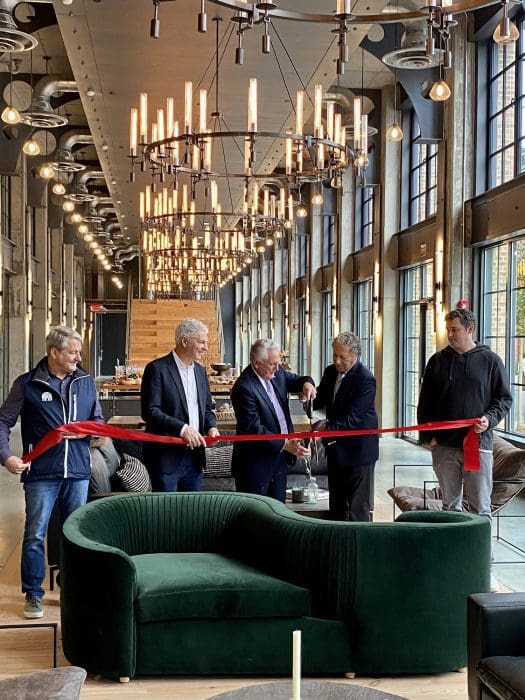 Mayor Harry Rilling cuts a ceremonial ribbon in October at Spinnaker Real Estate Partners’ development, The Platform, on Monroe Street. “It is located on the east side of the train station and features 106 residential units, 14 individual co-working/office spaces and 2,300 sq ft. of restaurant café space,” a news release said. “The community has extensive onsite amenities including a half basketball court, a fitness center, a massive great hall with an entertainment kitchen, meeting and media rooms, a roof top courtyard with a water feature, a firepit and seating for dining and lounging.” (Contributed)

Spinnaker has recently renovated Chestnut Street buildings and built 106 apartments on the corner of Chestnut and Monroe Street. Beinfield said the latter is 100% leased, with amenities that include an indoor basketball court that “gets used for hours every day.”

Spinnaker proposes to redo the train station entrance from Monroe Street as part of the $6 million state grant, Beinfield said.

“Right now, it’s somewhat of a of a mess, and that there’s very little organization there in terms of where taxis go, where buses go, where you drop people off, and the parking itself is, is not well organized. So this proposal would clean up, all of that,” he said.

“Between that roadway and our proposed project is a new outdoor plaza area, that would be about 8500 square feet of area,” he said, and Spinnaker is “trying to get a brewery into the building right adjacent to this space to be an anchor for this development and to be another reason for people to get off the train.”

A planned “50-foot-wide by 200-foot-long plaza” would allow food trucks in as “another way of incubating small businesses in the in the area,” Beinfield continued. Also included is 3000 square feet of transit-oriented retail “where people could drop off their dry cleaning and or get prepared meals to bring home.”

The project is the centerpiece for the $6 million Community Challenge Grant, Bidolli said, commenting that $1 million of the grant will be allocated towards rehabilitating existing affordable housing in the project area, in response to the District B feedback.

In addition to the public plaza, “We’re going to be doing a lot of green infrastructure improvements around the area, really trying to create South Norwalk as a showcase project, not only for Norwalk but the whole state of Connecticut. I mean, this is a huge opportunity for transit-oriented development,” he said.

Bidolli said commuters won’t lose parking spaces while the project is built, as part of the drafted LDA.

“Just to be clear, you will need to get approvals to eliminate any parking spots for any period of time,” Council President Tom Livingston (D-District E) warned the Spinnaker folks.

Edvardsen commented that the City has done much environmental research on the property and if more is needed, it would “probably in collaboration with the Parking Authority.” 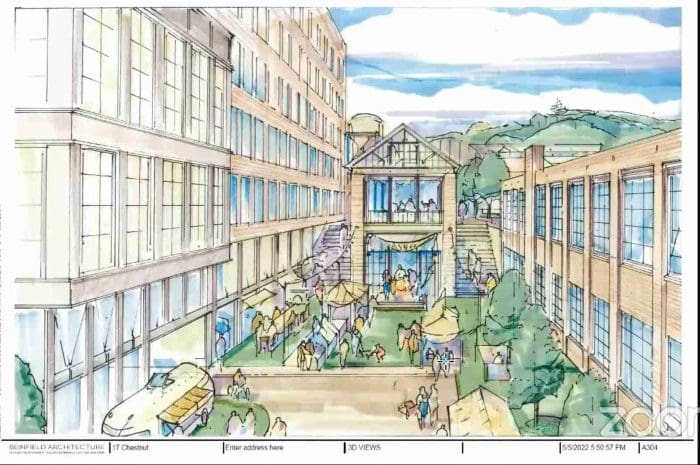 “We want to make sure that we are not without those 60 parking spaces at any point throughout the the project. The way we’ve approached that is through project phasing,” Bidolli said. “It’s become a little bit more complicated, because we just received this grant last month.”

If the units aren’t built, the City will have to repay the State the grant money, Bidolli said. Obviously, that’s a risk but the money will be spent over time, after the project gains the necessary approvals, “So it’s not all upfront at once, and then you know, you’re on the hook, if something happens down the road. We can play with the schedule, we can work on that to try to mitigate our risk.”

Norwalk residents might shudder at the term “LDA,” given the debacle Wall Street Place has become.

Livingston said he and Bidolli have “talked about this extensively” and “we have to make sure we do not fall in any of those traps.”

“A lot of lessons were learned,” Bidolli said. “It was the centerpiece of every discussion as we started this whole process. You know, there’s inherent risk to any development project. I’d be lying if I said there wasn’t, but it’s all about the mitigation and what we could do to try to, you know, help that.”

Spinnaker’s Chestnut Street properties currently produce about $22,000 a year in property taxes, Bidolli said, adding that the project will be an Enterprise Zone beneficiary with phased in taxes and won’t pay the full amount until its eighth year, at which point, under the current mill rate and property valuations, the City would expect $878,000 a year.

Over a decade, the property taxes would be $5.7 million and Spinnaker would pay $4.6 million for the parking lot, resulting in a $10 million benefit to the City over 10 years, Bidolli said. Add the $6 million grant and it’s “an estimated economic benefit about $16 million to the city over the 10 year period, as a result of this project.” 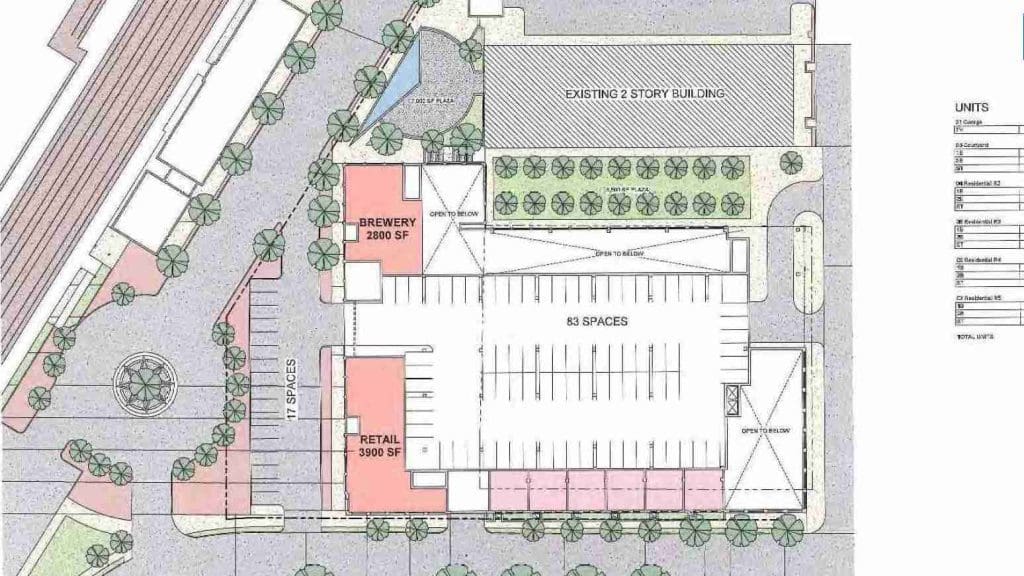 A schematic of the proposed development.

Clay Fowler and his Spinnaker team are the best and will no doubt build a successful project.

BUT shouldn’t the City resolve the FREE parking POKO disaster before they give another parking lot away.

Great, another dead façade for the tourists to walk past as they hurry to their morning commuter train. Just what SoNo needed! Really creates that “sense of place” – said place being the entrance of a Six Flags, where you’re walking around a bunch of oddly-proportioned buildings that you can never actually enter.

It’s not like there are a half-dozen outdated furniture showrooms that are bizarrely out of place next to a booming nightlife district, which could probably stand to be relocated to empty strip malls on Connecticut Ave, or that still-half-empty boondoggle of a mall, in order for us to extend the historic Washington Street “row-buildings” style and make more room for the apartments, small businesses, and restaurants that make the district so darned attractive.

It’s not like there are also a half-dozen more empty lots and abandoned buildings on the edge of that district, owned by speculators waiting to see if they can cash out on Harry’s next high-rise deal.

It’s not like there are several dozen vacant retail spaces in SoNo that that $6M from the state could go REALLY far in financing new occupants for.

Oh wait, that’s EXACTLY what it’s like. Nevermind. Sorry for bothering anyone.

Spot zoning for “friends” – municipal monopoly with the taxpayers money.

I bet Clay Fowler wakes up every day and says – how did I ever get so lucky as to get Harry Rilling as mayor? He’s going to make me a centi-millionaire, and all I need to do is contribute $1,000 every two years. Such a deal.

We should have known Beinfield would be in the mix – he near-water boarded Rowayton, did you think he was going to leave the rest of us un-tortured? I’ve seen good design work done up close – he is a box-making blacksmith with limited imagination – and what he describes as “aesthetics” is dollar-store lipstick on a pig. Shame.

What on earth did this city do to itself, that we deserve this? Our community is being built so a handful of developers can make hundreds of millions, visually our city resembles Stalingrad, and as for all those poor folks in SoNo – this is what gentrification is – and your representatives are knowingly pricing you right out of your city. Nice job.

Spin it any way you want. Anytime I’ve done improvements to a property it has resulted in immediate tax increases. How do I sign up for phased in taxes? Enough of big developers being given tax ‘incentives’ while my property Improvements just cost me more money.

Glad to see some better use being made of the SoNo station area. This is the perfect spot for infill developments such as this. Provides more customers for local businesses, increases density and walkability, and will help reduce upward pressure on rents by increasing the city’s housing stock. A definite step in the right direction.