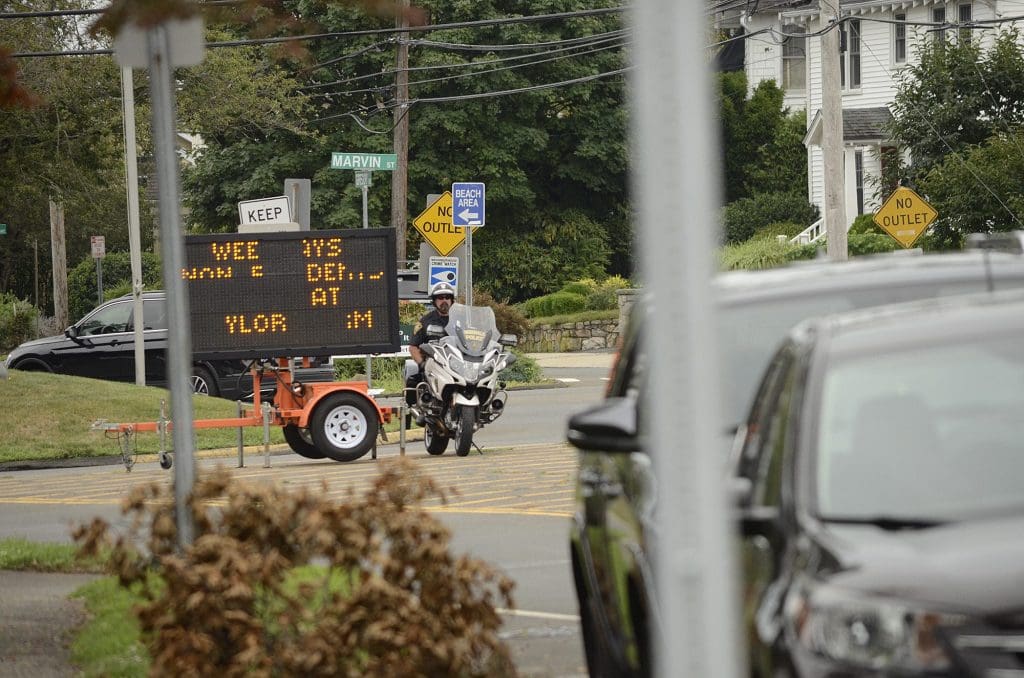 A Norwalk Police officer stationed at the Gregory Boulevard intersection with Marvin and Fifth Streets, in August.

NORWALK, Conn. — Roundabouts may be coming to Norwalk and a “confusing” change made quietly by the Department of Transportation, Mobility, and Parking near the beach is being reversed.

“There’s a yield sign, probably about 15 feet in from Fifth Street on Gregory Boulevard, which is very, very confusing. It almost looks like the traffic is supposed to yield to traffic on Fifth Street, which has a stop sign. I don’t think that’s a proper signage there,” said Rilling.

Monday’s meeting also saw the debut of a roundabout plan dreamed up for Fitch Street and Strawberry Hill Avenue.

“Right now, it’s a concept plan. There’s no identified funding for it but it was brought up as an option,” Yeosock said.

Rilling referred to roundabouts as a “coming thing.” 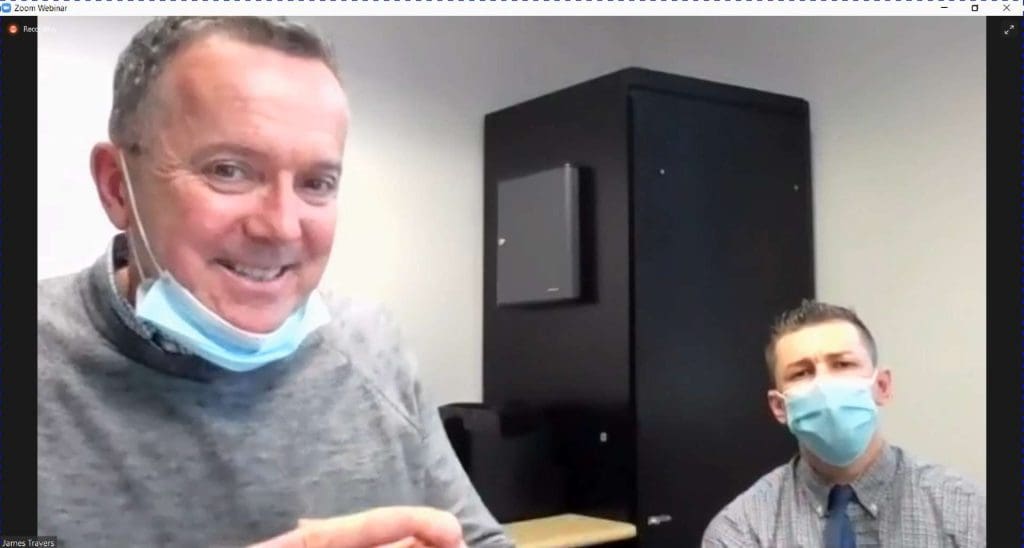 TMP changed the signs at Gregory and Fifth because the Customer Service department had gotten complaints of near misses and driver confusion, Yeosock said in a memo to the Authority. It’s functioned as a traffic rotary or traffic circle for years but there were no signs telling drivers who were coming around the curve from Marvin Street to Fifth Street to yield to drivers heading south on Gregory Boulevard.

If you’re in a circle you yield to entering traffic but if you’re in a rotary, you have priority over incoming cars, Yeosock said. Research showed 11 accidents in this spot between May 30, 2015 and Sept. 15, 2019.

“As a result of this information and due to lateness in the year, we converted this intersection to a roundabout by installing a yield on the Gregory Blvd southbound and Marvin St westbound approaches prior to notifying the Traffic Authority,” Yeosock wrote. “We subsequently notified the Traffic Authority of this change at the November 2020 meeting, however, it was provided as an information item rather than an action item.”

On Monday, Rilling said he’d been getting complaints from neighbors about the change “and as I went through the area and looked at it, I, too, had some concerns about the the pattern.”

He also said he didn’t think it was a “roundabout” but was a “rotary.”

“The Traffic Authority never voted on it,” Rilling said. “I would think that we would go back to where the way it was and do a more comprehensive study of that area because I have gotten numerous complaints about it being very confusing the way it is now.”

Commissioner Kelly Straniti said she’d come up from the beach recently and thought another car had run through a sign at that intersection and then realized she had done it. “I didn’t notice if it was a yield sign that was put there or something, but it was definitely new …there needs to be some clear signage on that because I’m sure I’m not the only one who was like, ‘What just happened there?’, especially when you’re going this certain way for years and all sudden something is different.”

Commissioner Fran Collier-Clemmons asked if residents had been notified. Yeosock said Norwalk Police officers had been there for about a week after the signs went up. 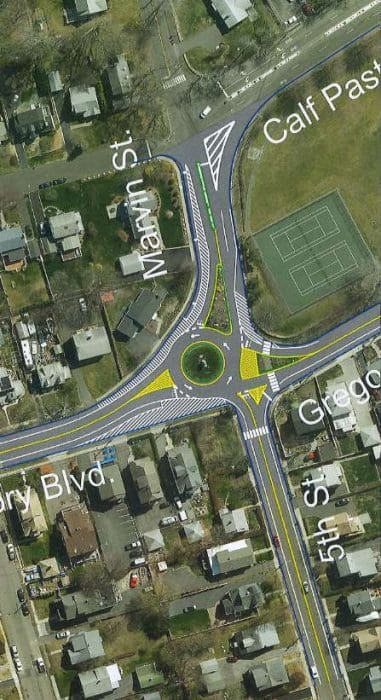 A plan for painting the Gregory-Marvin-Fifth convergence.

Yeosock has presented a plan for more elaborate markings in the intersection. Travers called the existing circle a “little peculiar” given that it’s off center. He said he’d studied the previous configuration by using Google Maps, and it “had you yielding within the roundabout, or even within the traffic circle, which would not necessarily follow any manual of uniform traffic control devices.”

The Connecticut Department of Transportation has “yielding upon entry” as the standard mode, he said.

“I do think that more markings in the roadway are required for people to get a better understanding,” Travers said. “… I think that we could bring some, you know, not only aesthetic improvements to the area but also functioning in that area of that intersection.”

Police Chief Thomas Kulhawik said he knows roundabouts from driving on Cape Cod and “that’s not a roundabout and I didn’t really understand what it was. So I agree with everything you said. It needs to be better addressed.”

Rilling recommended reversing the changes and “then do some research and let them take a look and present a more detailed plan.” The three-member panel voted unanimously to remove the yield signs.

The East Norwalk Neighborhood Association (ENNA) asked TMP to consider a roundabout at Strawberry Hill and Fitch Street instead of a traffic signal or a three-way stop, Yeosock said.

“I do like the idea of roundabouts if they’re properly sized and properly designed,” Rilling said. “I would look at this as a possible opportunity for that to happen there, keeping in mind that we’re an old city, and people are used to certain things and when we do make some significant changes, people need to be aware of that, need to be introduced to the new concept.”

“Looking at the draft rendering, it looks like it’s a good possibility for us to have… I think it would be really helpful for the traffic flow,” Collier Clemmons said.

“I’m open to seeing how it works. And I think that if anything, you know, that that is definitely good intersection to do as a test,” Straniti said.

She said she wanted to hear about studies, and accident reports. 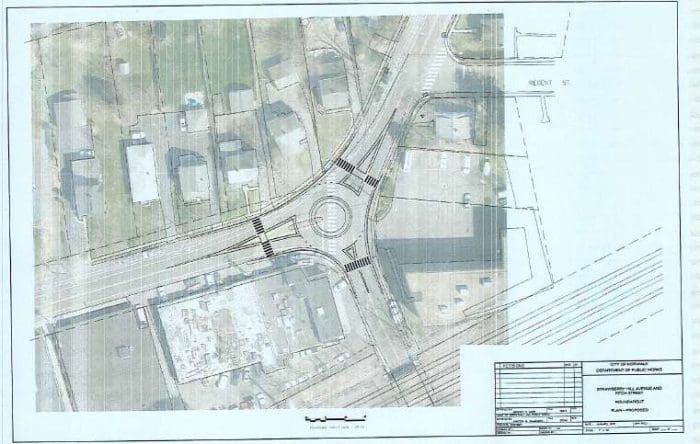 A concept plan for the intersection of Strawberry Hill Avenue and Fitch Street.

“I couldn’t tell you about accidents, but just from using them, quite often, they work great,” Kulhawik said. “Traffic flows smoothly. I will say that the first time I encountered it, it was ‘get used to it.’ But once you experience it, you’re used to it, they work great.”

She also asked if the City would have to take any property. Yeosock said no, it looks like there’s enough room. There have been about two accidents a year there, he said.

“I agree that the team ought to work together and see if they can present to the Traffic Authority a concept that would be workable. I’ve also asked that Mr. Travers to start looking at other areas in Norwalk, along with Mr. Yeosock, as to where we might take some opportunities to have roundabouts because I think they are the coming thing, and they do help with traffic flow. I don’t know what the experience with accidents have been. I think until people get used to it, I’m sure it’s a little confusing.”

Rilling said he’d like to see a roundabout at “the top of East Avenue, or Mill Hill. That’s kind of a five-way coming into every which way and there’s a lot of traffic in there. But I don’t know if that is something possible or doable, in that particular area.”

It makes me recall how Mayor Dan Malloy, over in Stamford,spent one million dollars on a “traffic calming” study (done by a Hawaiian firm,no less)that suggested, among other ideas,that round abouts would slow people down and train them to drive “better”.
Sorry. Total failure. Nothing got better and I would advise that enforcement of current laws is the only way to modify behavior. The trouble is, most police departments don’t really care to do that.
Good luck with your new traffic director!

Thankfully I am careful. I could have been in an accident due to the reversal. An informational sign should have been added. Confusing has become more confusing.

The initial change was poorly executed. There’s no rationale for having made this change in the first place. Countless tens of thousands of visitors who don’t even live here manage to get through here without incident on the way to and from the beaches and marina.

I appreciate that Mayor Rilling and Jim Travers had the sense to look at this logically and reverse it.

Next step: leave it alone.

Roundabouts are not the same thing as traffic circles!? When I enter one, how do I know the difference?

Selfishly I like having the right-of-way when exiting the Marvin Beach side of the lower Gregory Blvd circle. There have been times in the past when heavy traffic from Boat Show or super busy beach day made for very long waits to get through. But given the preponderance of traffic to Calf Pasture the current system doesn’t feel safe. Separately, there’s no really good way for a cyclist coming down the Marvin St big hill to make a left onto lower Gregory.

Thank you, Mayor Rilling! I nearly had an accident there. The new yield sign on Gregory Blvd was often hidden by trucks parked between Nick’s and Fifth St.

Yield signs alone cannot standardize and nonstandard intersection. The diagram presented to repaint and narrow the area is what’s needed to truly turn this into a roundabout, and I hope it’s executed. As much as I love unimpeded flow to and from the beach for myself, it’s very dangerous to walk or bike near there, and it’s hard to come out of lower Gregory or Fifth Street. The roundabout should preserve the majority of natural flow to and from the beach, while making it safer for everyone else.