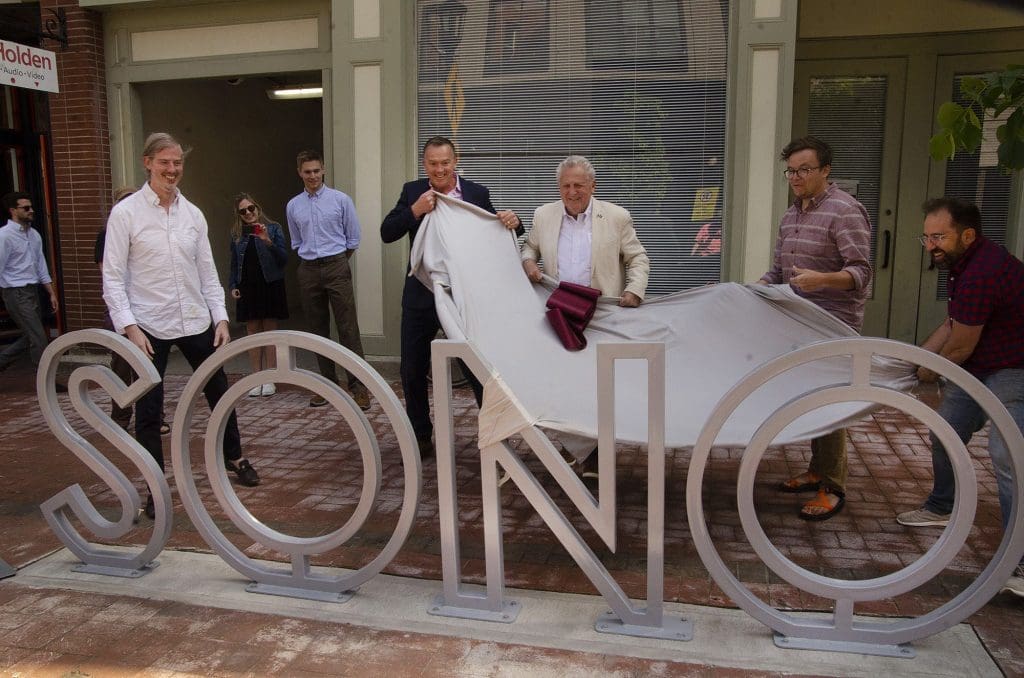 “We’re going to double the amount of bike lanes in our city in with one project, that’s going to be a grant funded by this Connecticut State Department of Transportation. And that will happen later this summer,” Director of Transportation, Mobility, and Parking James Travers said at the unveiling of a Washington Street bicycle rack.

“We will be placing bike racks which don’t exist right now. The reason we’re doing that is so that when somebody wants to ride their bike down here, they’ll have a secure and safe place to leave their bicycle,” Mayor Harry Rilling said. “And we have one at the South Norwalk train station, we’ll be placing them at different locations. And it’s something that we’ve wanted to do for quite some time.”

The unveiling of a bike rack “in the heart of SoNo” was done to support the businesses, Travers said. 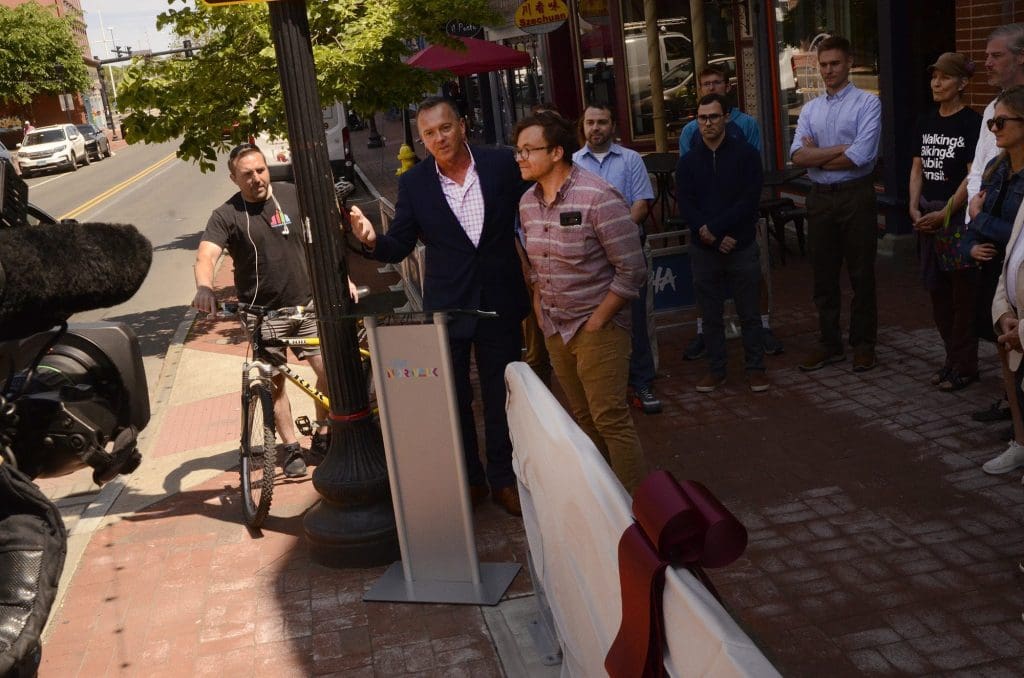 TMP (Transportation, Mobility, and Parking) Director James Travers, center, and Bike/Walk Commission Chairman Tanner Thompson, right, speak Tuesday about new bicycle infrastructure in Norwalk. “this really starts a larger process that has been in a vision of the Mayor and his administration in the creation of the Bike Walk Commission, as well as the creation of the Transportation, Mobility and Parking department,” Travers said.

“Bringing bikes into a downtown core like this is, is a boon for the businesses in the area,” said Norwalk Bike/Walk Commission Chairman Tanner Thompson.

Economic benefits have been “well studied,” and an example is a recent project in Seattle, he said. Bike lanes made 65th Street more accessible for cyclists and “in the ensuing year, the sales on that corridor tripled,” Thompson said. While you might be thinking of downtown Seattle “with skyscrapers and stuff, this is a mix, a small mixed-use core surrounded by multifamily and single family housing within walking distance. So we’re not talking about a dense metropolis, we’re talking about an area very similar to SoNo.”

“I’m really excited to see more bike racks right here in Washington Street,” said Brad Kerner, owner of the nearby EcoEvolution marketplace. “If this triples my revenue, I will come give you a big hug and kiss.” 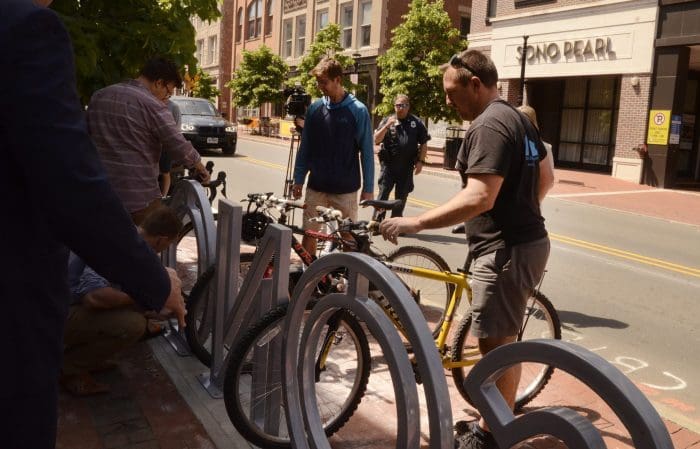 The new rack gets outfitted with bicycles, Tuesday on Washington Street.

Eric Sell, owner of Affogato on Washington Street, said the new bike rack isn’t just “really ascetically pleasing” but “the spread of residences in this area that are not necessarily walkable but bikable is just a huge opportunity for a business like mine, where people want to sit and not worry about parking and have a more casual experience.”

“One of the biggest factor that determines whether somebody is going to choose to take a bike when they need to get somewhere is how safe it’s going to be for them,” Thompson said. “As Jim alluded to, the city is working hard on dedicating more space for people on bikes with these bike lanes that are getting painted soon. Also with extensions of trails like the Norwalk River Valley Trail, that is in progress right now.”

“As we continue to add more bike lanes in the city, and as biking becomes more accessible to more people, we need to make sure that we have an opportunity for people to safely secure their bikes at their destination,” Travers said.

“When somebody chooses to ride their bike down here to Washington Street, instead of driving, they’re contributing less CO2 to the atmosphere, less particulate emissions, less microplastics going into our watershed, a lot less noise,” Thompson said. “… A lot of people who get around on their bikes, that’s the reality is that that’s their primary mode of Transportation. And if they can’t secure it, then they can’t be sure that they’ll still have it at the end of the day. So it’s incredibly important that we provide places where people can lock up their bikes.” 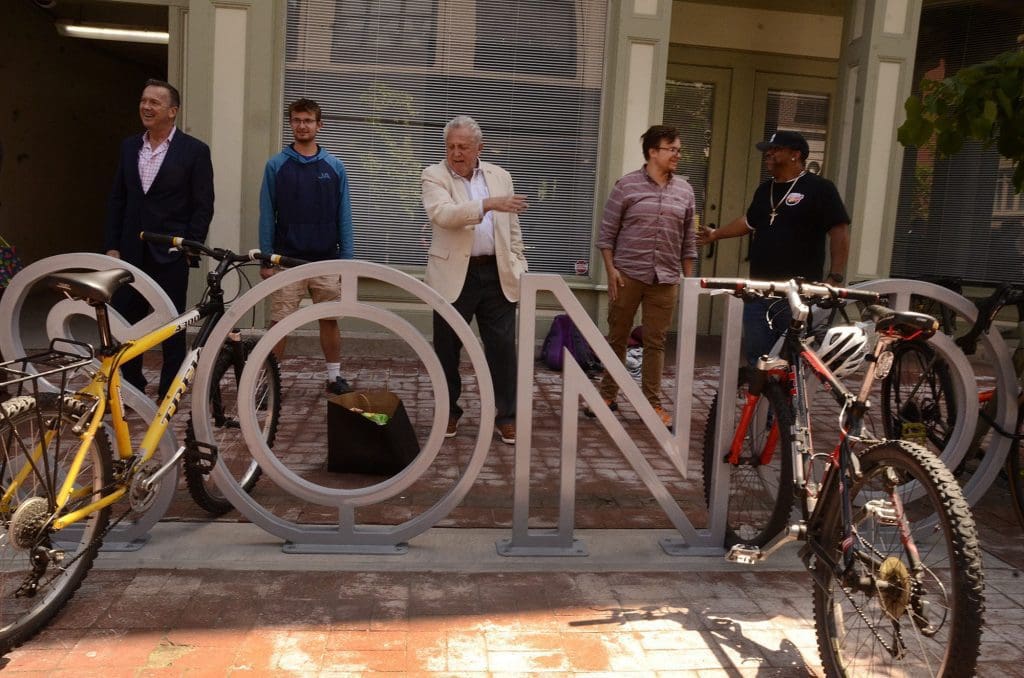 Awesome, and thank you Jim Travers, TMP, Bike/Walk Commission, Mayor Rilling, and all others involved! It’s amazing to see what is happening all over Norwalk in terms of new sidewalks and bike lanes and safer streets.

What’s not to love about this initiative? Bike-friendly streets can boost economic activity by up to 50%, at the same time making the streets safer for all users including pedestrians and car occupants by slowing average traffic speeds.

So it’s good for business, good for people, and good for the planet. Keep up the great work!

I was happy to attend yesterday’s unveiling of the new bike rack on Washington Street, a great new piece of form-and-function for our CommUnity of Norwalk. More bikes, less cars: Quieter and cleaner Norwalk.

Thanks for covering our event Nancy!

For those interested in the data, here’s a write-up of the study in Seattle I referenced: https://seattletransitblog.com/2013/08/06/seattle-case-study-economic-impacts-of-bike-facilities/

To be clear – this was the effect of bike lanes, not bike racks – data on the effects of installing bike racks is harder to come by. The best data I’ve found on the impact of bike racks is from Portland, where businesses were surveyed on the perceived benefits of adding bike corrals (replacing a car parking spot with room for ~a dozen bikes). Two-thirds of businesses reported an increase in foot and bike traffic, and over 80% said the bike corrals enhanced the street and neighborhood identity. https://nacto.org/docs/usdg/bike_corrals_miesel.pdf

You can read about more bike lane studies in several different cities (most of which are larger cities) here: https://www.bloomberg.com/news/articles/2015-03-13/every-study-ever-conducted-on-the-impact-converting-street-parking-into-bike-lanes-has-on-businesses

One correction – in the first sentence, the “15 bike lanes” should be “15 miles of bike routes” – about half of which will be bike lanes. The other half will not have dedicated bike lanes, but rather sharrows – the bike-and-chevron symbols on the road that instruct riders & drivers to share the road.

These 15 miles will form a north-south route from the New Canaan town line, through NCC, to Rowayton, and an east-west route that will connect Rowayton, South Norwalk, and East Norwalk, and end at the Westport town line. This project is funded by a CT Community Connectivity Grant, and will be the single longest on-street bike route project ever overseen by ConnDOT!

The grant also includes money for sidewalks & a crosswalk that will connect Ponus Ridge Middle School with the sidewalk on Ponus Ave.

Having satisfied Norwalk’s “bikers” can our City leaders roll up their sleeves and get to work on our long depressed shabby Downtown that depresses both our local economy and reputation as a livable City ?

This is good policy. Strongtowns.org calls them “small bets” – the hundreds and thousands of small things we do to improve our neighborhoods and make them more liveable. It’s a critical part of incremental progress.

Too bad that this is the EXCEPTION around here, and not the RULE. Harry’s too busy mortgaging Norwalk’s financial future to let speculators build high-rises.

This is a thriving neighborhood whose historic architecture should be allowed to naturally expand south along Water and West Main. But for decades now, it’s been Harry’s NIMBY machine and those same speculators all standing in the way.

This is great work! Exciting!

How can we have bike lanes when the roads in town are impassable? Every road is either dug up or being dug up. Its a mess out there.

This is great news! Hopefully the first of many more to come! More racks are a key element of making Norwalk more cycle friendly. Thanks to everybody involved.

This awesome work. I bike through the city regularly and usually don’t stay in the city while out on my rides due to the lack of good bicycle transportation infrastructure. As a result of this lack of bike lanes and bike racks, I usually go off and spend my money in other near by towns. I look forward to enjoying more ride in my home town.

How many bikes can you lock to that? The sign looks nice but the O’s look rather limiting as a bike rack and Norwalk has a lot of new renters with many more to come

This is great. I hope some of the monies can be used to add a wider shoulder on West Rocks rd near the entrance to Walmart parking lot and old Rte 7 across the street from LA Fitness entrance. The sewer line repair requires patching afterward but it also enables the possibility of a more permanent traffic engineering fix-road widening to inclue a shoulder so that cars heading up the hill don’t have to make a choice of hitting a cyclist or being hit by an oncoming car. The sight lines and space on the shoulder are too limited as is. Does the city have to pay a lot to abutting property owners for eminent domain to add a foot to the road on the uphill side of the street? What would it cost? I would be willing to contribute.
A less dangerous ride to the health club would encourage more cyclists to leave their cars at home.