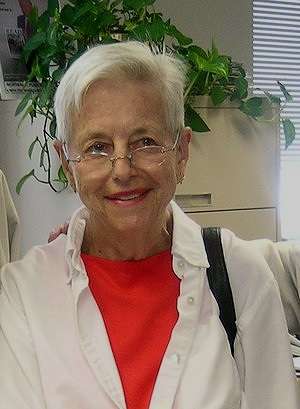 Gibbs, a longtime Democratic stalwart, was the volunteer executive director of the Norwalk/Nagarote Sister City Project for more than 18 years, beginning in 2000. She was on the Common Council in the early ’70s and in 1976 ousted a 24-year party boss to become Democratic Town Committee chairperson, according to a biography posted on ActionNetwork.org.

“She then managed four successful Mayoral Campaigns (and one unsuccessful one) for Bill Collins. Collins appointed her City Clerk in 1977 and she served in that position until 1981. She was Democratic State Central Committeewoman from 1978 to 1990,” the biography states.

Collins told NancyOnNorwalk in May that Gibbs had suffered a stroke. He was taking care of her, so he wasn’t making appearances at government meetings, he said.

“It’s heartbreaking to hear about the passing of Tish Gibbs,” Norwalk Democratic Town Committee Chairwoman Eloisa Melendez said.  “She will always be remembered for her commitment to our city and the life changing work of the Norwalk/ Naragote Sister City Project.”

“Tish was a dear friend who I admired and respected as the most effective community organizer in Norwalk,” former Mayor Alex Knopp said. “I first met Tish in 1981 when she was organizing Bill Collins’s campaigns and our families became close friends, sharing meals and going on vacations together. She organized the successful Get Out the Vote Election Day projects for my campaigns for Mayor. She was a great conversationalist about gourmet food, books, and cultural events. Tish was truly a unique personality and I shall miss her wonderful presence.”

Gibbs graduated from Wheaton College in Massachusetts in 1957 and then worked as a staff writer for Good Housekeeping Magazine before retiring to bring up her two sons, the biography states.

“When she moved to Connecticut in 1964, she joined the League of Women Voters and worked with a team on a study of solid waste which led her to connect with CCAG supporting many iterations of the bottle bill,” it states. “She also joined forces with Bill Collins in 1971 who had organized the Norwalk Environmental Action Team to collect recyclable paper, glass and cans door to door. This led to her appointment by Mayor Donald Irwin as Chair of Norwalk’s Recycling Program.” 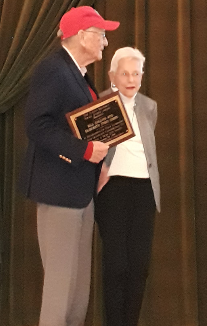 Gibbs and Collins were honored in 2018 by the Connecticut Citizen Action and Research Group, receiving The Nancy Benedict Social Justice Award. A news release called them “long-standing leaders in advancing progressive issues at the local, state, national levels – as well as around the globe.”

“Tish was appointed to the Board of Director of the Maritime Aquarium at Norwalk in 1985 where she served until 2002 when she stepped down to accept an appointment to the Maritime Aquarium Authority. During this time Tish was also named to the boards of the Norwalk Human Services Council, Literacy Volunteers and Keystone House.

“In 1985, Tish was hired as Grants Coordinator at Norwalk Community College where she spent the next 15 years helping to build NCC into one of the state’s leading community colleges.

“In 1986, Tish and Bill visited Nicaragua as part of a fact finding tour for elected officials during the illegal Contra War sponsored by the Reagan administration. She was so affected by the conditions she found there that she joined the Norwalk/Nagarote Sister City Project, a partnership for sustainable community development between the people of Nagarote, Nicaragua and the Greater Norwalk Area of Connecticut. She soon became Treasurer and later Co-Chair. In 2000, when she retired from Norwalk Community College, she agreed to become the unpaid Executive Director of the Project and has just retired from that full-time job at the age of 83.

“During her tenure, the project began addressing the needs of Nagarote’s most disadvantaged children providing afterschool programs for teens, encouraging community service, and developing leadership skills. As a result, teen gangs were eliminated and teen pregnancies were greatly reduced in the barrios where the Project worked. The Project now has a full-time bi-lingual Nicaraguan Field Director as well as a staff of 20 based in Nagarote. In 2011, they built a community center and this year they built their own preschool on their campus. Hundreds of children have completed school with their scholarships and many have continued on to college although most of their parents never finished sixth grade. In the last election in Nagarote, both candidates for Mayor were graduates of the Norwalk Project’s programs.”

She was truly a woman of substance. My deepest condolences to Bill and the rest of the family.

Such a sad loss! Both Tish and her sister Anita were extraordinary women who gave their energy to the causes they cared about. We are so lucky to have benefited from Tish’s intelligence and heart. Our deepest condolences to Bill and their family.

Tish was such an inspiration, and always so cheerful. I recall helping her navigate and set up a page on Facebook for The Sister City Project – she was determined to keep up with the latest technology (and she did.) She touched so many lives, she will be sorely missed in Norwalk. Condolences to Bill and her family.

Tish was a marvel: quick-witted, to the point, and a force for good in Norwalk and around the world. We enjoyed many conversations about fundraising as she sought to improve the lives of children in Norwalk’s sister city, Nagarote, Nicaragua. My condolences to Bill and their family. Her light and legacy will live on!

May your Soul rest and flourish in the flow of good karma you lavishly earned and inspired in this life. It was a privilege to know you,Tish. Bless you Mayor Collins, my very first and wise friend in Norwalk. May your compassionate heart and care of Tish, and so many fine things, be comforted. An exceptional couple.

Tish was one special woman full of love and devoted to making the world a better place for everyone. She will be dearly missed.
Myška and Paul

Remarkable beloved Tish: leader, mentor, beloved mother and grandmother, talented grant writer, voracious reader, thinker/doer, and most of all a good friend for more than 40 years.

I have known Tish Gibbs since I was a little kid. You have to applaud someone who has put others in front of herself all of her life. Politics aside she was a fantastic woman and always there for the betterment of others. RIP and god bless!

Tish will be remembered for her intelligence and dedication.
She was able to change so many people’s lives. A remarkable person and a example to all of us to emulate.
Sending our deepest condolences to Bill and their family.

It’s hard to imagine a better model for civic engagement and thoughtful activism than Tish Gibbs. What a rare gem our community enjoyed for so many years. Time to commission another Tina Duryea Sheroes portrait.

Very sad news. I did not know Tish well but met her a few times with her husband Bill. We were Facebook friends and I always enjoyed her posts and she seemed to enjoy mine. Very progressive, caring woman.

Is there anything planned at this juncture? I would like t be included, if so.

Deepest condolences to Bill and family an friends.

I am saddened by the loss of my very good, old friend, Tish and I send my sympathy to Bill and their respective families.
Tish and I were Art History majors at Wheaton College in MA. I was a bridesmaid in her wedding to Tony Gibbs. We had remained friends since 1957. Not long ago, she and Bill visited CA and we had a wonderful hike in Muir Woods among the redwoods. That memory will be cherished.

I knew Tish well when I was running for Congress in the 4th Congressional District. She was always spirited, thoughtful, kind and giving to so many causes. And, a perfect compliment to Bill Collins. May she rest in peace.

Sending additional condolences to Bill and his Family. Tish will be missed. You two made for a Dynamic Duo from way back in the 1980’s when I first moved to Norwalk. Tish was one of the best City Clerks we have had…and was the glue years ago in organizing election day phoning and rides to the polls….