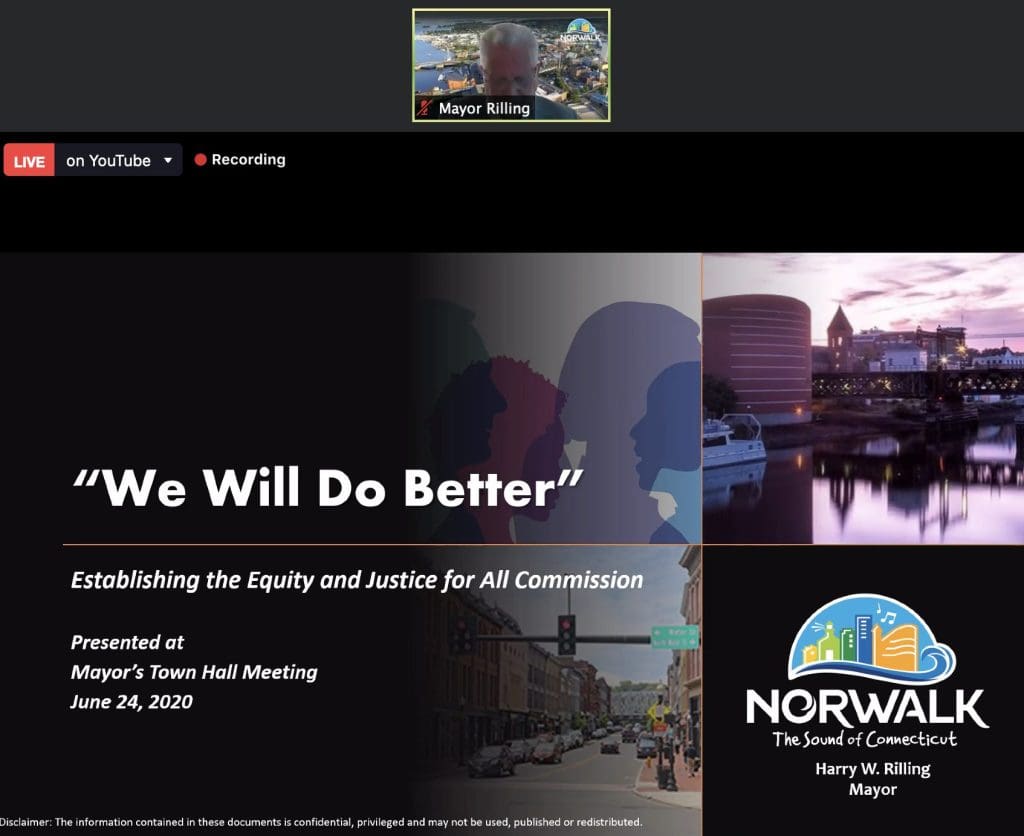 NORWALK, Conn. — From housing to health care, from policing practices to education — these are a few areas the new Equity and Justice for All Commission would like to address.

“I envision this as being a permanent standing committee in the city to constantly evaluate situations and equity and injustices,” Mayor Harry Rilling said during a virtual town hall that laid out the plans for establishing the commission.

Chief of Community Services Lamond Daniels will be spearheading the effort to get the commission off the ground and begin its work, which will include hiring a professional consultant to help guide the effort. 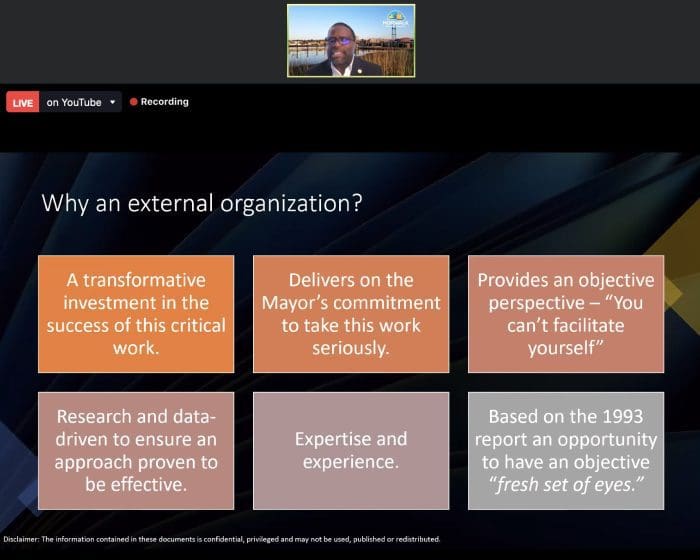 “This work is both professional and personal for me,” Daniels said. “I think it’s clear that I am a Black man.”

Daniels said that he was “excited” that the Mayor wanted to commit to address equity and justice in Norwalk.

Daniels laid out three overarching purposes for the commission:

To begin the work, Daniels said that the commission would be taking an “immediate next five steps.”

“This is not it, there is much more work ahead of us,” Daniels said.

He emphasized that they need “experts at the table,” which is why they plan to issue a request for proposals for organizations and individuals who have a proven track record of doing this type of work. He also said that bringing in a consultant will help deliver on the Mayor’s commitment to this and help bring in research and data.

“I want someone to come in with a fresh set of eyes who can listen,” Rilling said. “I want neutrality. We’re going to make sure this is fair, honest and objective.”

Still, he said that the community members, particularly younger residents, need to be a part of the Commission, as well as public meetings, surveys and other work that comes out of this group.

“We want the people of Norwalk to take ownership of this,” he said. “This is us. This is us as a community. This is going to define who we are.”

Daniels said they would use the 1993 Blue Report as a template to see what areas were addressed at that time, what recommendations were made that were never implemented, where are there still gaps and what unmet needs are there still.

Rilling said that even though the report was done in 1993, some of its recommendations were still valid today, but “after a few things were implemented it got put on a shelf.”

“No one size fits all. We are a city of almost 90,000, however each city has its own nuances, its own dynamics,” Daniels said. “This is going to take work. We want to build an institution of practice so beyond leadership, beyond who’s in charge, this will stay.”

Daniels said that he understands the concerns of residents who feel that this will just be “another committee.”

“The community keeps saying, ‘Oh boy, here we go again,’ and I feel that way too, but I’m also asking you to work with us,” he said.

Rilling and Daniels said that they wanted people willing to share their stories about discrimination, racism and other experiences of injustice, as well as those who can ask the hard questions of them.

“We don’t want this group to just be made up of elected officials or professionals,” Daniels said We want real Norwalkers who can speak to the issues.”

Rilling estimated that it would take about one to two months to get the RFP issued and begin some of the research and data collecting. Once the Commission was officially launched with the consultant, Rilling said that recommendations would be issued on a rolling basis as they came up. 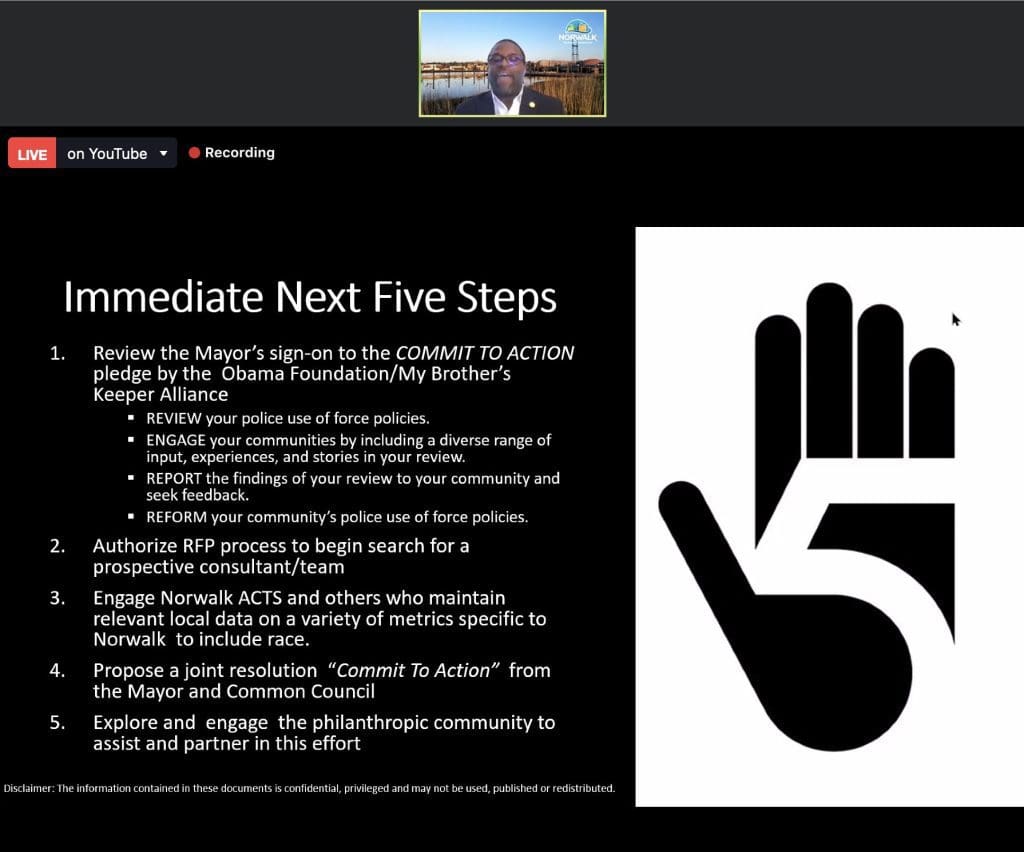 What is needed is a Regional panel that looks at the racist exclusionary practices of the wealthy towns that surround Norwalk. Other than the occasional “virtue-signaling”, towns like Darien, New Canaan, Westport and Wilton have done next to nothing to increase their anemic stock of affordable housing. Instead, they continue to put up barriers to legitimate developers. Rather than tear down statues of Columbus, protesters should look at tearing down signs that say “Westport”, as these represent immoral bastions of segregation.

@Norwalknative is spot on in terms of neighboring towns. I was so thankful to see the police chiefs of towns like New Caanan sign the letter that he’s against racism.

Two things. I wonder if this commission or anyone will ever address the breakdown of the family unit and all the data pointing to its impact. Secondly, is the consultant going to be paid for by eventual higher taxes or from the defunding of the police?

Norwalk Native why not start your crusade in Rowayton, Wilson point, West Norwalk?

Those neighborhoods have the same “racist exclusionary practices” you speak of. High prices for housing.

Although I am not sure how a neighborhood being expensive is racist. Which races are not allowed to live there?

There is this law called Fair Housing that prohibits discrimination. Are people breaking it?

Or is it racist to suggest certain races can’t afford expensive neighborhoods or towns?

And who gets to live in the affordable housing you want? Should apartments be awarded based on income or race?

I’m 100% for helping every kid succeed. While Lamond formulates his plan I hope he includes accountability. Come September our teachers will be under the microscope. I think parents, guardians and kids should be under the microscope as well. I think we should have cameras in the classroom (blurring faces of course) to understand what teachers and students face everyday. If a cop should wear a body camera, why not a classroom? Maybe we’ll be pleasantly surprised?…

My point is that Fairfield County’s rich towns control access to their communities with exclusionary zoning practices that prohibit Construction of affordable housing. Many times, excuses such as “protecting the character” of the neighborhood or excessive traffic concerns are used as barriers to entry. Whatever you may believe the motives to be, the facts are that these towns remain overwhelmingly white and segregated in an otherwise highly diverse state. I would agree that Rowayton also fits the description. The difference is that Rowayton must use Norwalk’s school system.

Economic barriers are just as effective as Jim Crow laws at impeding diversity.

We are having a national conversation about historic and systemic under-priviledge and disenfranchisement of people of color.

Is it your premise that only rich white people want to live in Darien or Westport and take advantage of their fine schools? I’m not sure what your point is.

Well, this will be a lively discussion! And I’m pleased it is starting, and that our Mayor will seek to provide a structure to support it, and hopefully, find ways to move beyond talking. But talking seems like a very reasonable start.

I cannot be the only one that sees this. Are we going to allow another layer of bureaucratic oversight, destine to be filled with progressives, further hamper our lives?

Common sense tells you most people act with a decent level of integrity and treat others with the dignity and respect they deserve. Did we all forget the ‘Golden Rule’? Maybe the rioters and looters did but that is a very small part of the population.

Governmental actions like this imbue a select few with significant powers they were not given by the electorate.

Mayor Rilling wants his new commission to “eradicate the inequities and injustices in our community.” But what will be this commission’s definition of injustice and inequity? Is this the justice sought by BLM, or the Cancel Culture? Or how about the blatant censorship on Twitter, YouTube and Facebook. Most likely since that is what the democrats nationally are supporting.

This is the type of change that needs to be voted on by the people, for the people. Not a stacked 14-1 common council.

As a taxpayer in this city I take real offense to this action by the mayor. I hope the rest of you will let your concerns be known as well.

This is a fine idea as long as there is no cost to Norwalk taxpayers for additional staff and consultants. Get involved, people! Put your time and effort where your mouth is. City government isn’t going to do it for you. Norwalk residents will give you a forum as we always have. Make your case.

I always find it amusing when Left wingers tell us how to run our lives….They may want to start at their own kitchen table before pontificating how others should run their lives. As I’m writing this I realize crazy right wingers are guilty as well. Begs the question : How do we get rid of the fringe nutcases on both ends of the spectrum and live happily ever after? As the famous Fraser once said, “Seattle, I’m listening”.

Congratulations on Norwalk for recognizing the need for this. It’s a step in the right direction.