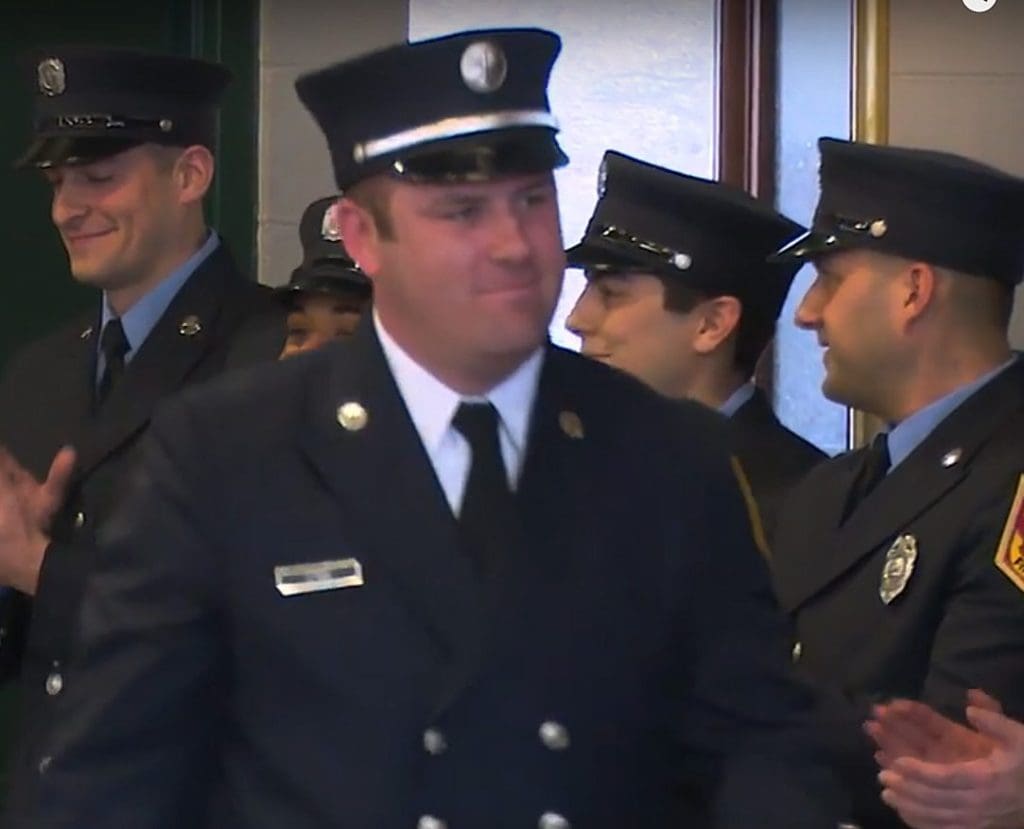 NORWALK, Conn. — Norwalk is working with the Anti-Defamation League to address anti-Semitism in the community, Mayor Harry Rilling said Wednesday.

Rilling’s comments came one day after Norwalk Fire Chief Gino Gatto informed NancyOnNorwalk that one of his lieutenants, Pat. St. Onge, had been suspended for a week after telling a Jewish underling that Jewish people are “dirty.”

“Hatred, prejudice, and antisemitism have no place in Norwalk or anywhere else. The comments made by Lt. St. Onge do not reflect the values and beliefs of our community or of the Norwalk Fire Department. His comments were ignorant and hurtful and unacceptable. I was disgusted by them,” Rilling said in a statement.

St. Onge has apologized for his remarks. He was hired by the department in July 2002; his promotion to lieutenant was announced by the Fire Commission in June 2016.

“The Chief is required to follow progressive disciplinary actions pursuant to the union contract,” Rilling said. “Lt. St. Onge had no previous disciplinary history, and the one-week suspension represents a significant financial loss. If an incident of this nature occurs again, he could face termination. It’s my hope he will use this time to reflect on this incident to better understand the seriousness and impact of his words.”

St. Onge is eligible for a promotion to captain because he has been a lieutenant for more than three years, the union contract indicates. He can take the test next month, sources say.

Gatto did not reply to an email asking about that.

“This is a rare and isolated incident. Any complaint is investigated fully and will not be tolerated in the Norwalk Fire Department,” Gatto said Tuesday.

The Fire Commission held an executive session on July 21 to discuss a personnel matter. Fire Commissioner Oscar Destruge did not reply to an email asking for comment.

Rilling said his staff is “working with ADL (Anti-Defamation League) to pull together meetings with local Rabbis and the community to discuss next steps we can take together.”

“I am angry and disturbed by Lt. St. Onge’s anti-Semitic comments to his fellow firefighter, Alex Horelick,” Common Council President Barbara Smyth (D-At Large) said in a statement. “These comments are hateful, offensive, and unacceptable.  The fact that there has been more than one incident of hate speech directed at Mr. Horelick is evidence that Lt. St. Onge harbors deeply held prejudice against Jews and brings into question what is merely a slap on the wrist for his behavior.  As a teacher, I have spent years educating my students about the horrors of the Holocaust and the subversiveness of prejudice.  I hope Chief Gatto will investigate these incidents further and explore additional consequences for Lt. St. Onge.”

This slap on the wrist to this bigot is totally insufficient. And now we learn that the guy could be promoted to Captain? Maybe these contracts need to be examined more closely. This whole incident, including the way it is being handled, is just plain wrong.

Discipline has already been applied and it would be a violation.
The doctrine of industrial double jeopardy enshrines the idea that an employee should not be penalized twice for the same infraction.  See, e.g., Gulf States Paper Corp., 97 Lab. Arb. 61, 62 (1991) (Welch, Arb.).

Interesting how a police officer correctly was suspended and criminally charged for his actions in choking a black suspect, but when this firefighter makes an anti semitic remark about Jewish people he receives a one week suspension. Jewish people continue to be the victim of anti semitism. It is time that JLM (Jewish Lives Matter) should become a movement to end this millennium old persecution. Jewish people are important also.

He’s made MULTIPLE anti semitic comments. Other public servants who made SINGLE racist comments were let go immediately. And they weren’t serving the Jewish public as directly as this emergency Responder is supposed to be! Double standards at their finest. Mr. Rilling you must do something to this facist. Moving him around after a weeks vacation doesn’t cut it.

Anti Semitic remarks are also known as racism against Jewish people. If it were any other form of racism he would have been summarily dismissed. He should be dismissed.

Needs to be demoted at best, fired at worst!

These are just words, WE DEMAND ACTION! Meaningful action to remove this man from his position of power within the fire department.
How can he continue to be a “leader” when he treats people under his watch so badly?
The Jewish community and all those who stand with us against these vile attacks on Jews will not stop until something is done. We have been silent long enough, this needs to stop! And the message sent is not only will it not be stopped, but through lack of meaningful action and punishment, that the city outright CONDONES THIS BEHAVIOR!

Since the mayor seems so unwilling to act, as does the fire chief, it is my hope that if we put enough pressure on, the city council will step up and do the right thing.

Maybe it is time for JLM to become a movement. Maybe we need a march through Norwalk and approach our Mayor about more action. Anti Semitic slurs should not allow an anti semite to continue working in our community. Plus, this man is still eligible for promotion. Outrageous.

Why don’t we start a march or protest at city hall or in front of the mayor’s house? ‘Disgusted’ is meaningless, if we want change let’s push Rilling and see what he’s really made of.

Sincere question – why do the firemen take the big truck to shoprite loaded up with like 4 or 5 staff? What’s the point, if in the event there’s a real emergency.

If St Onge cannot be further disciplined then he should be removed from consideration for Captain.
We, as a community do not want a leader with hateful prejudice. Norwalk is better than this.

A week’s suspension is a joke. Clearly this is of little concern to those in power. I had thought Norwalk was better than this, but clearly anti-semitism is alive and well.

Bigotry of any form is unacceptable. Saying”he would have gotten fired if he made this comment about a black person” makes it seem like black people get people fired for saying the wrong thing. What it should be is all people stand up against those that are bigots.

This whole thing reflects badly on the firefighter mentioned and just as bad on his superiors who tried to sweep this under the rug.

I was brought up to believe racism and anti Semitism is a sign of ignorance. You can’t fix stupid

Judaism is a religion it’s not a race. The progressive left is anti religion and creates race issues to get votes.

Accordingly- while I hope for more from our elected officials and department heads- I’m afraid to say their response is most unfortunately- and what I expected.

We Chan change things- that what elections are for.

So this guy is gonna get to be a captain next month?Crazy. If he can’t keep the hate in his own heart from showing, how can he control anybody under his supervision? With these unions that protect the bad apples the way they do, termination may be to much to ask, but is it to much to ask that he at least does not hold a senior position of power?

It is time for the Mayor to publicly take action. If not, does Norwalk have a Mayor with selective anti-semitism? The Mayor and FIre Chief must take strong action now!
How can we, as a Jewish population, take action. We need a movement to pressure the Mayor and Fire Chief to terminate an anti-semetic (who supposedly is there to protect all lives) and do it now.
Will there be someone to organize a legal protest of anti-semitism?

How can I find out what part of the city this man works in? I have an elderly family member who lives with us and I have had to have the emergency services respond to my house in the past. I DO NOT WANT THIS MAN TO SET FOOT ON MY PROPERTY! Not that he would probably want to since he might get “dirty” in my house, us being Jewish and all, and him calling us dirty.
I’d have hoped the punishment given would more closely reflect the seriousness of the matter but the mayor and fire chief did no such thing.
But alas, they allow the hate to continue and take the word of a person who has on more than one occasion exhibited abhorrent behavior toward his subordinate based on his religion. This man is sorry all right, SORRY HE GOT CAUGHT.
He himself said that his actions erode his ability to be a supervisor, so why is he still one? who could stand to have this man as their boss? If you work under him are you expected to have his same views? At the very least he should not be leading anyone and should have someone with better control of themselves be in charge of him to save the city more problems in the future.

It is time the Jewish community takes (legal) action about this matter. How is it that the black community rises to the occasion, but no one in our own city cares enough to take action against anti semitism? By now there should be marches and action to dismiss an anti semite. Why is the Jewish community and any supporters afraid to act? It appears that our officials want to sweep this under the carpet.

How do we make our voices heard???

Whoever yells the loudest gets what they want. Maybe we should be taking a page from BLM and start putting the pressure on for more meaningful action. I’m not the organizer type but I’d surely attend any rally in support of this cause. The mayor and fire chief and whoever else is responsible for this travesty need know we won’t stand for this. This should be news everywhere but it’s not. Makes you wonder why.

Looks like we can thank our Mayor and Fire Chief for ignoring anti semitism. I have not seen any further action from the Mayor or FIre Chief. Mr. Mayor, I hope you will not receive a Jewish vote next election.

Is there anyone out there who knows how and can start an online petition to have St. Onge removed from the fire department? I would be among the first to sign. This is our only hope.