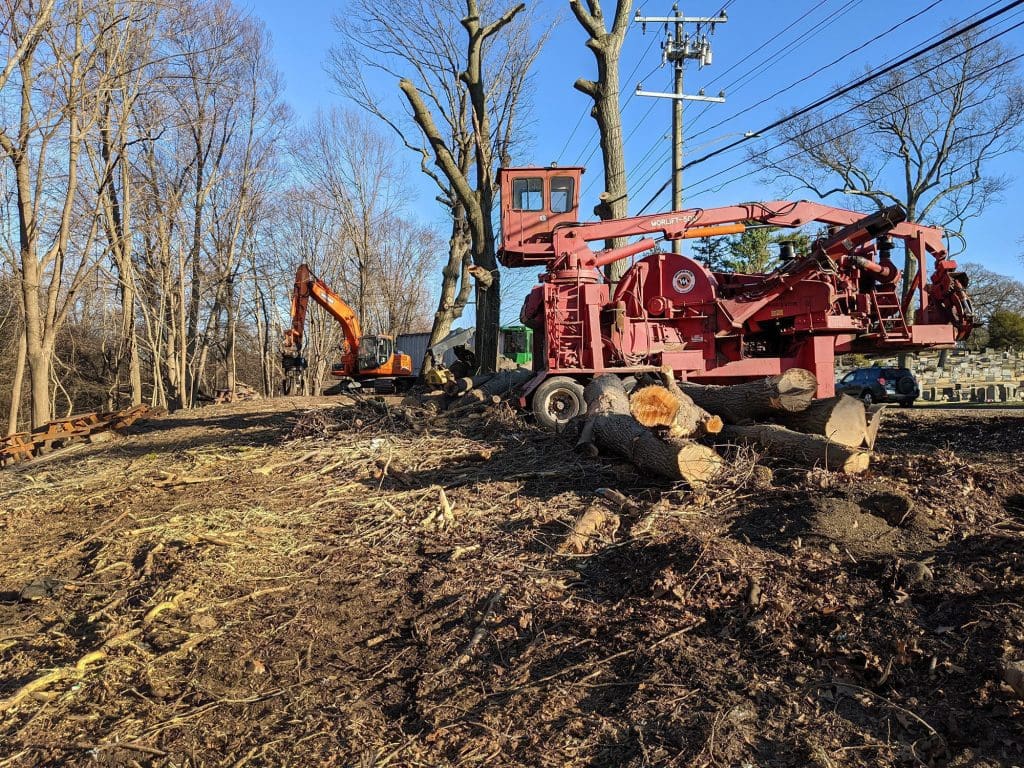 Equipment sits Tuesday alongside Riverside Avenue. Only one of the trees shown in the middle remains. It’s survival is due to a complaint from Bill Wrenn and quick action by Norwalk Tree Warden Chris Torre, Common Council member Lisa Shanahan (D-District E) said. 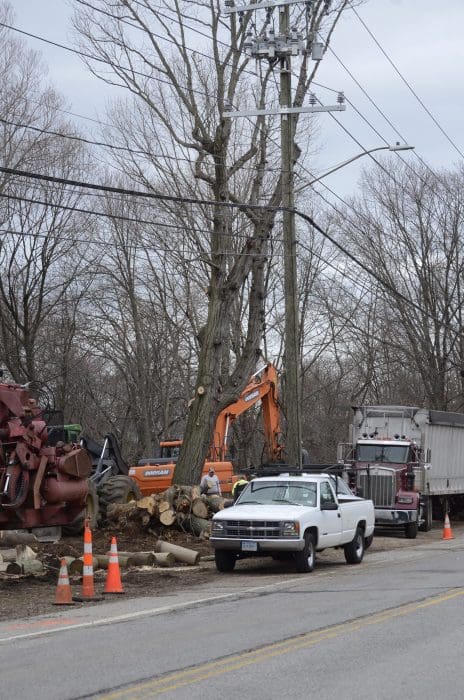 A single oak tree stands Wednesday as Deering Construction workers chop up the remains of other trees.

NORWALK, Conn. — The long-awaited effort to connect Norwalk River Valley Trail segments just off Route 7, eliminating a “missing link,” has finally begun. But the joy is tempered for some proponents because workers, in clearing a large swath of land alongside Riverside Avenue, have cut down old-growth oak trees, said to be to be key to the environment.

One lone oak was saved at the behest of Council member Lisa Shanahan (D-District E), although after visiting the site, self-styled “environmental stewardship advocates” Audrey Cozzarin and Diane Lauricella told NoN that the surviving oak might die from faulty pruning.

Shanahan said she contacted Norwalk Tree warden Chris Torre in response to constituents’ concern about the tree removal, one of whom urgently pointed out Tuesday that a 30-inch oak was marked for removal.  Torre, she said, “was extremely responsive and went directly to the site.”  He told her that the trees were on “property that is either owned by the State or where the State has a right of way… therefore, the State was the decision maker about what trees were to be removed for the building of the trail.”

“I was told that the State did not consult Chris before they began the tree removal,” Shanahan said.

Norwalk Communications Director Josh Morgan described the project as a partnership between the State, the City, and citizens group Friends of the NRVT, with the ongoing work occurring in the State’s right of way.  The ultimate goal for the NRVT is a trail that extends northward from Calf Pasture Beach through Wilton, Ridgefield, and Redding to a terminus at Danbury’s rogers Park. 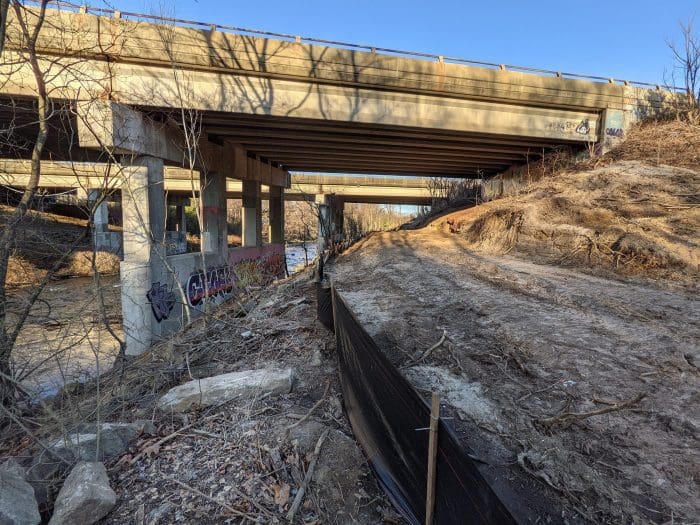 “The vision for the trail along the river goes back decades – at least to the 1970s – and has been a part of several Plans of Conservation and Development,” Morgan said. “This 1.2 mile section – commonly called the missing link – connects two sections of trail which will provide 4 miles of continuous off-road multi-purpose trail from the Maritime Aquarium to Broad Street.”

Shanahan stressed that City leaders are “all very excited about and totally supportive of the expansion of the NRVT, which is just a fantastic project for both our City and our region.”

Conservationists will tell you that “oaks are highly prized trees here in Connecticut as they feed many species of insects, birds and animals,” she said. “Oak trees also sequester a high amount of carbon, especially large and old ones such as this tree. A tree this large and old is very expensive to replace.” 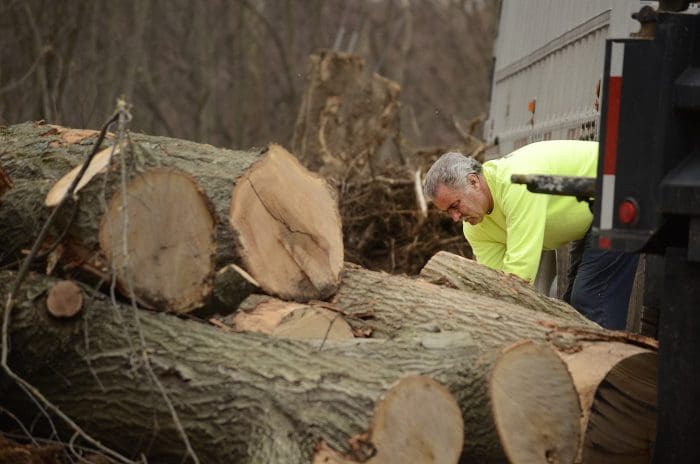 The Conservation Commission issued a wetland permit for the NRVT “missing link” work about three years ago, Norwalk Senior Environmental Engineer Alexis Cherichetti said Wednesday. She had just heard about the work and hadn’t yet determined if Deering Construction, the State’s contractor, was in compliance.

Morgan said the trail has to be ADA (American Disabilities Act) compliant.

“The area cleared (more than 5,000 feet) included approximately 10 mature trees, but it was mainly invasive vines, intrusive smaller trees, and overgrowth,” he wrote. “… Given the time of year and with additional fill and grading work still to be conducted, the area looks more cleared than what will be the final result. It’s also important to note that as part of this project there is funding to plant additional trees in appropriate places along the trail. The NRVT is a real gem of Norwalk, and when the missing link is completed, there will be miles of off-road trail in Norwalk for residents to enjoy.”

“We’re so thrilled that the City of Norwalk has taken on this project for the NRVT,” Merrill wrote to NancyOnNorwalk. “The trail, which runs between the Norwalk River and Riverside Ave., is a very challenging, narrow piece of land which has to navigate the constraints of the nearby road, the floodplain, and the river itself. Importantly, this new trail will connect two already existing parts of the NRVT and create a beautiful new outlet for the people of Norwalk to enjoy nature. We are especially proud of showcasing the beauty of the often overlooked Norwalk River.” 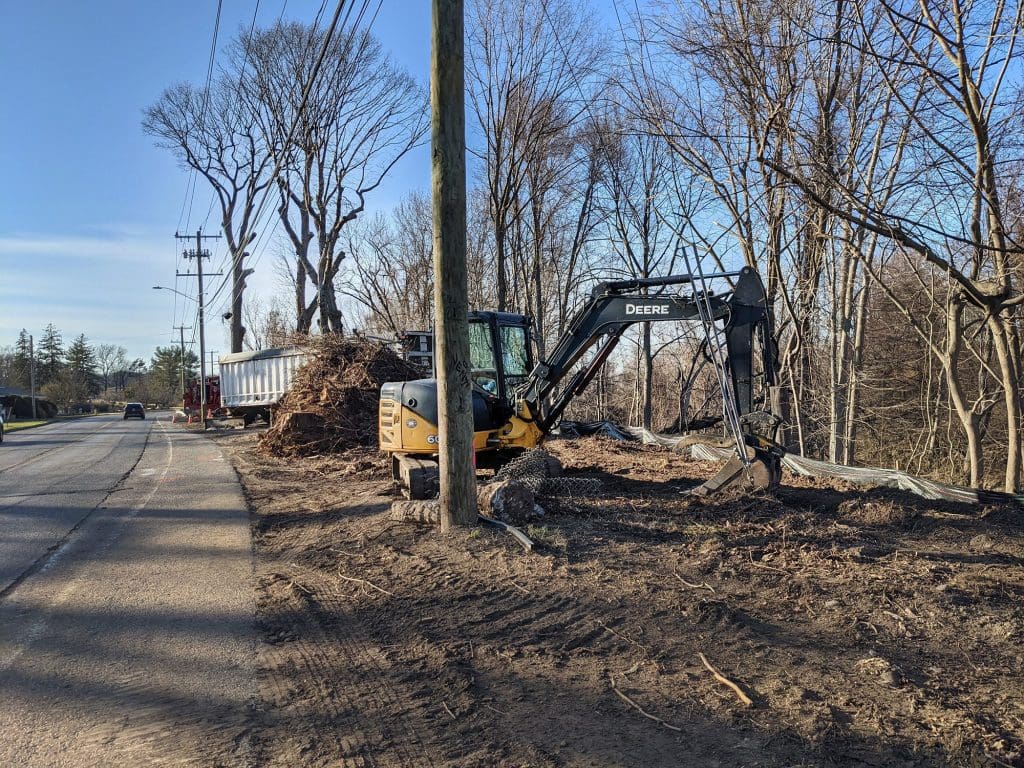 Equipment sits Tuesday alongside Riverside Avenue. Only one of the trees shown at left remains. 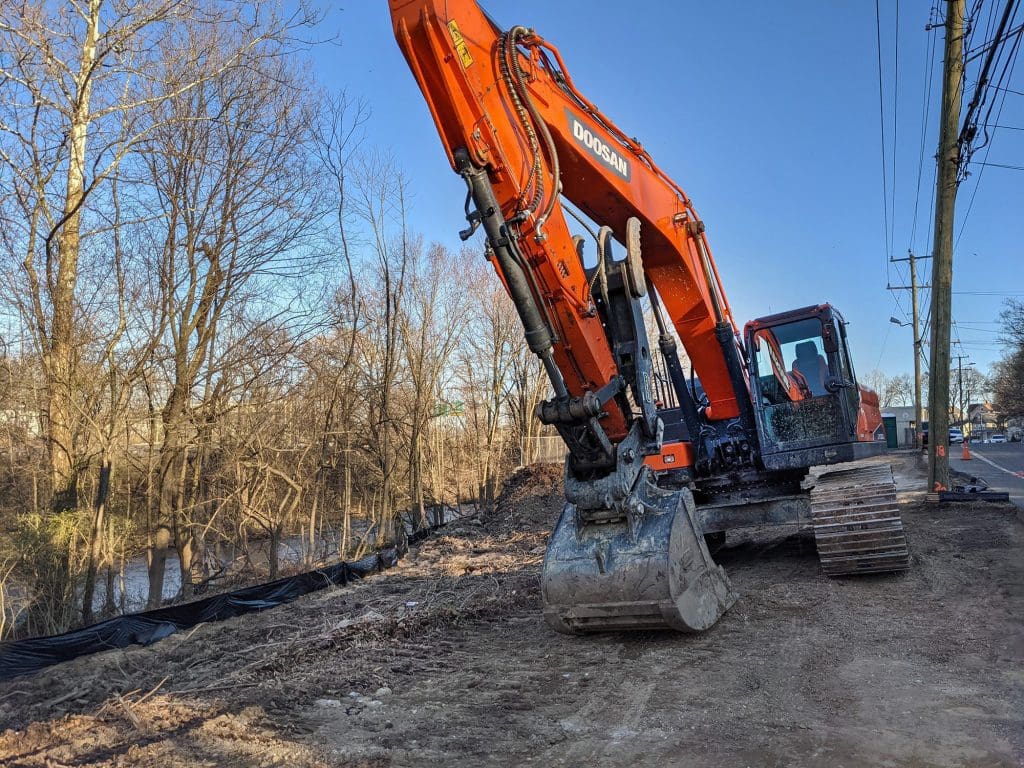 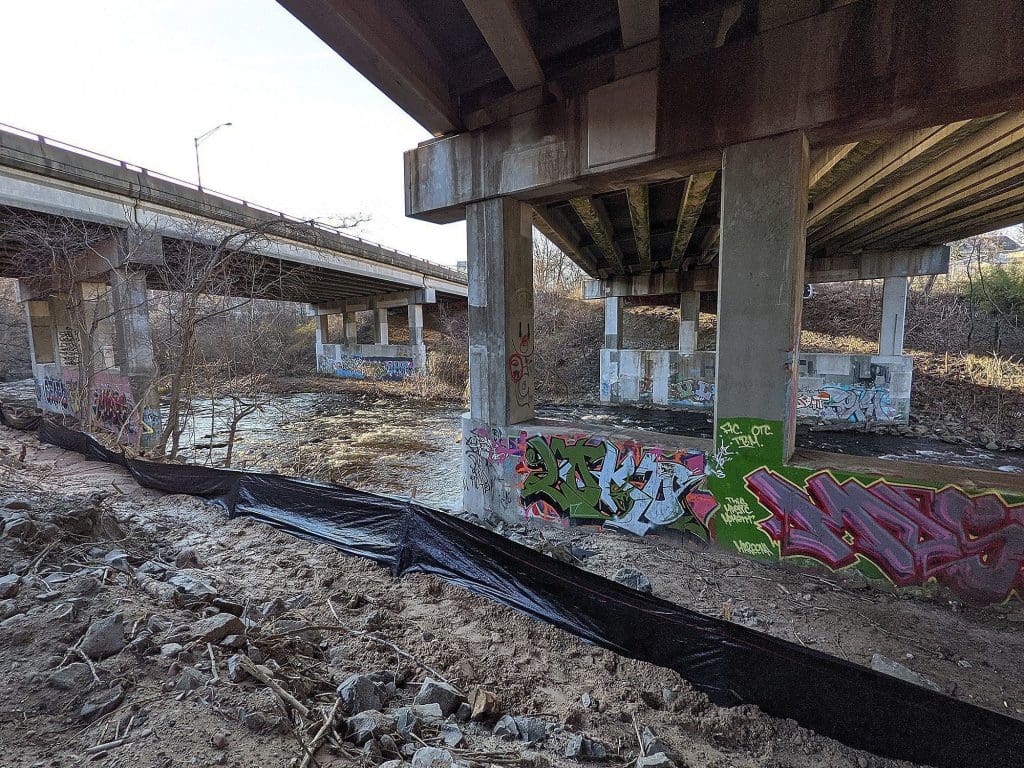 A newly cleared view of the Norwalk River. 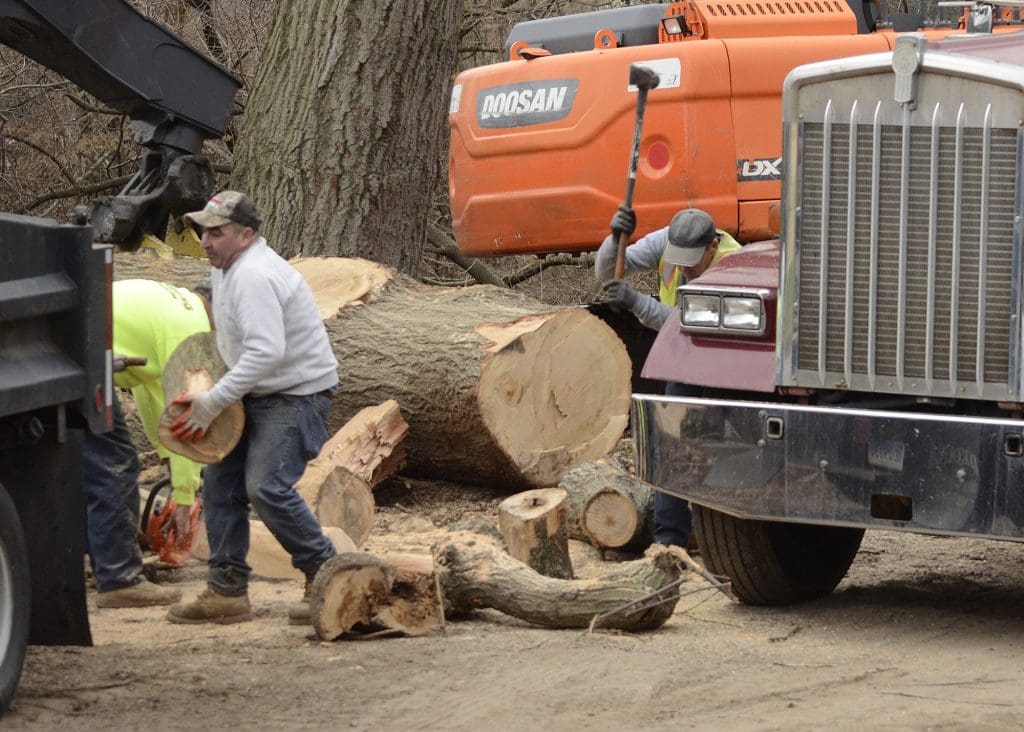 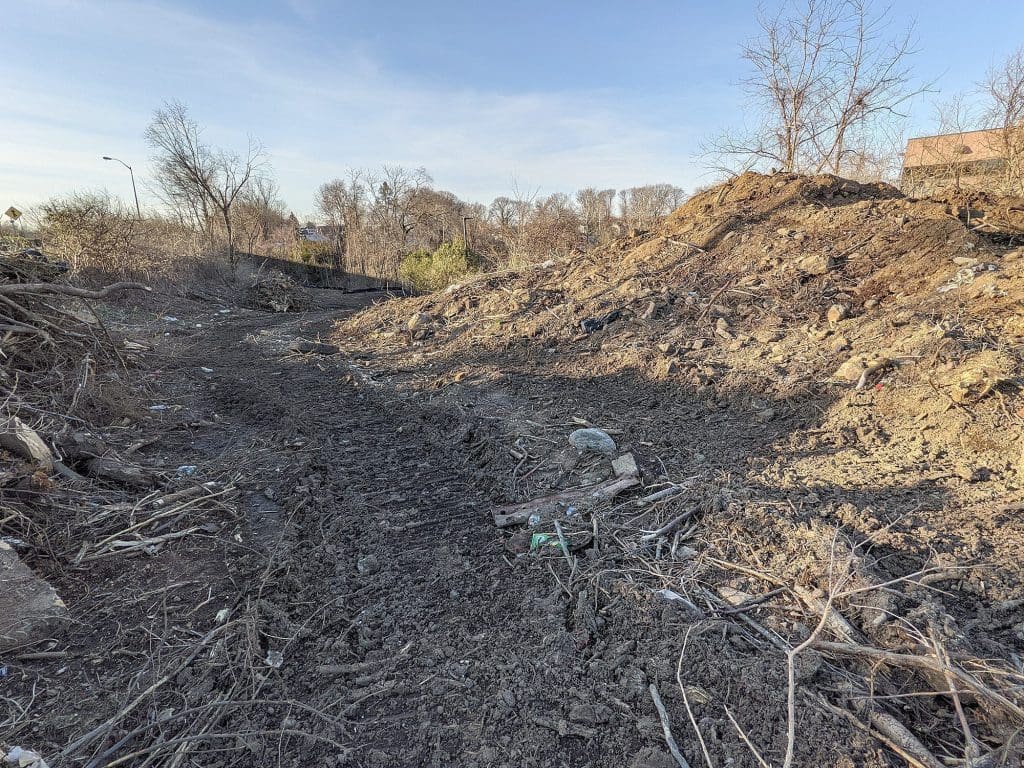 The cleared section adjacent to the Route 7 ramp off Belden Avenue. 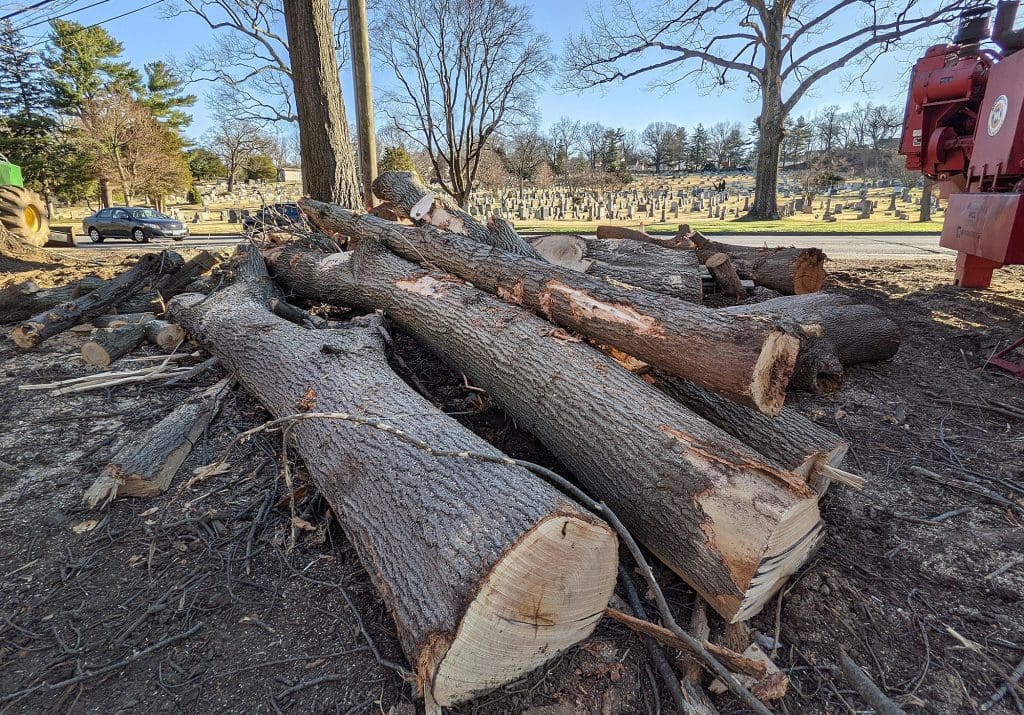 State sanctioned arborcide. Dan Malloy was the king of this kind of activity. Cherry trees in Stamford. Clear cutting along the Merritt.
Sad and senseless.

Thank goodness these people have the time to protect each and every tree in our fair city.
Let’s pass a law which forces homeowners to get city permits before removing trees from their own property. I see a new revenue stream for the city on the horizon.
Why stop there? How about permits in order to cut your lawn or rake your leaves? After all some would argue those chores alter the environment.
Now that I think about it I’m all for a complete ban on outdoor work of any kind that will alter the earth’s natural course. It will give me more time to comment on this site.

The Norwalk River Valley Trail (NRVT) is indeed a great gift for Norwalk, providing a safe passage for pedestrians and bicyclists, as Norwalk joins many cities worldwide in a movement for the health and well-being of both people and the planet (cleaner air, less traffic). I know it has been a huge effort to get this infrastructure project “moving” forward.

My concern is for the loss of so many trees in order to accomplish this, whether the land is owned and work conducted by the city or state. The plans may have been completed and approved some years ago and we now have better science and stewardship practices that I only wish could’ve been reviewed, examined, and implemented before this project commenced.

It is a learning experience for all of us “Earthlings” with the stakes so high for the plight of our planet. NRVT is comprised of very good and capable members and I know their intentions are to provide a beautiful experience in nature. Going forward, my guess is the trail will include native and pollinator-friendly areas with native trees added.

Since state and city land is PUBLIC land, I think recent outcries from the public about lost trees, woodlands, and natural open spaces is enough now to create policy and procedure to expect a permit after review, examination, and approval or denial by entities both public and private with expert consultation with experts and advocates. I believe Norwalk is headed in this direction which I applaud.

For those who are skeptical of the importance of trees, their value as Lisa and Diane have pointed out in this article, or wish to become more informed about the latest science, here are a few excellent recent talks–First, on a local level (Doug Tallamy), regional level (New England Forests, and global level (Dr. Moomaw of Tufts University). Our own Norwalk Library’s ongoing lecture series on the natural world has provided many Norwalkers with great and timely information about “going native.”
https://www.aspetucklandtrust.org/webinars
https://www.youtube.com/watch?v=Vi12xaJxA5U&t=1054s
https://www.youtube.com/watch?v=05mkC__d0MM

Trees were taken down before your home could be built.
In order to make an omelet you got to crack some eggs.

I’m no tree hugger but it seems that some trees could have been spared closest to Riverside and create a natural barrier for the trail between the road and the river. Hopefully the trail isn’t bordered by Jersey barriers.