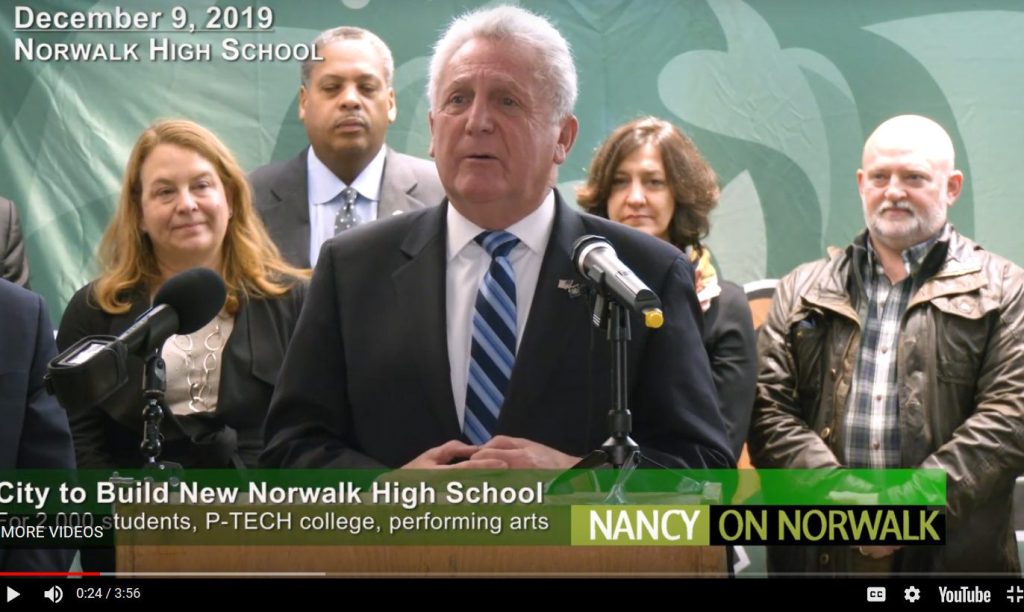 Norwalk Mayor Harry Rilling, center, announces support for building a new Norwalk High School with an expected 80 percent reimbursement from the state, during a December press conference, as shown in a NancyOnNorwalk video. 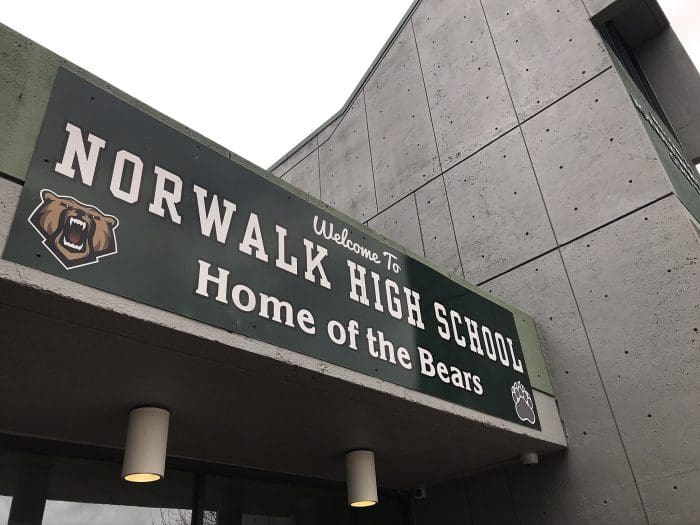 There “is a strong likelihood” that Connecticut will reimburse Norwalk for 80 percent of the construction costs for a new Norwalk High School, Mayor Harry Rilling said Wednesday. The City would “obviously” not go forward without the 80 percent funding, Norwalk Public Schools Chief Financial Officer Thomas Hamilton said in January.

NORWALK, Conn. — The new Norwalk High School project is a go and may even be built less expensively due to the COVID-19 crisis, Mayor Harry Rilling said Wednesday.

The Board of Estimate and Taxation went on to unanimously approve Rilling’s $153.83 million capital budget recommendation, which includes $50 million for Norwalk High, $3.5 million for a cafeteria at Naramake Elementary, $2.5 million for the Broad River Baseball Complex and $80,000 this year for design of the hoped-for Silvermine Elementary School driveway. There’s also $1 million for the Brien McMahon turf softball field, $170,000 for sidewalks in Rowayton and $4 million for watercourse maintenance.

The capital budget will now go to the Common Council for final approval, with a vote likely to take place May 12.

Rilling expressed confidence that Connecticut will go ahead with the promised 80 percent reimbursement for Norwalk High School construction costs.

Connecticut will see the project as economic stimulus, “getting people back to work as many other constructions projects will be,” Rilling said, calling this “good news, if you can find any good news in this coronavirus situation.”

“Moreover, we have been told that because of the situation, some projects are coming in quite a bit under the estimated amount at the beginning,” he said.

A school construction project in Enfield came in 20 percent under budget because people want to return to work and are being very competitive in the bidding process, according to Rilling.

The Planning Commission on Feb. 18, on a split vote, removed Norwalk High School from its recommended budget due to concerns over process, given that Chief Financial Officer Henry Dachowitz had put the project into the budget instead of the Board of Education, according to the meeting minutes. The Dachowitz maneuver was thought to be against the City’s charter.

It’s common for the Planning Commission to remove items that have been recommended in the initial budget formulated by the Finance Director and the Mayor, only to have them be reinserted by the Mayor in the next step of the process.

The Planning Commission also slashed the recommended $13.5 million funding for a combined dispatch communications console nearly in half; Rilling reinstated it.

Rilling returned all those projects to the funding that had been recommended in the January budget, in many cases a “zero.” No funding is recommended for the new school furniture.

In two anomalies, Rilling kept the Planning Commission’s recommendations over those made by Dachowitz. He recommends $90,000 for the Health Department instead of the $60,000 that was in Dachowitz’ plan, and $134,000 for ADA access to Mill Hill, which previously had no funding recommended.

The Dachowitz/Rilling original budget version had no money for Board of Education cafeteria/kitchen renovations. The Planning Commission recommended $5 million and the BET approved Rilling’s recommended $3.5 million for the Naramake cafeteria, as mentioned above.

The watercourse maintenance funding of $4 million is twice what was originally recommended by Rilling/Dachowitz and by the Planning Commission.

“Last year, we conducted a detailed flood study and now have remediation recommendations. This request must be fully-funded to properly address resident concerns who have been plagued with flooding issues for a number of years,” Rilling said in his letter to the BET.

“I am recommending $170,000 for sidewalk projects on Rowayton Avenue, Hunt Street, Witch Lane, and George Avenue. Typically, the city repairs and/or installs sidewalks in conjunction with its paving program. However, I felt it important to address these areas sooner,” Rilling wrote.

The $80,000 this year for the Silvermine driveway is slated to be followed with $1 million next year for construction.

In December, Rilling predicted that a new Norwalk High School would cost the City $40 million. He later said $50 million.

The $50.28 million in the this capital budget iteration is based on “a detailed estimate provided by our consultants for 20% of the cost,” Rilling wrote in his letter to the BET. “The opportunity for a new high school for $50 million is something that our community simply cannot pass up.

“I feel very comfortable that this is a budget with which we can live,” Rilling said Wednesday. “And also, the things we put back in, we will be … authorizing certain expenditures but not necessarily funding them. So, this is something that we’re going to be looking at as this process goes forward and determining what things we can do and what things perhaps we can’t do.”

“As the mayor just alluded to, we have previous items that were authorized that have not yet been bonded,” Dachowitz said. “So, we have to watch carefully as we go forward, what we bond how we bond, looking at the costs of projects, maybe…now they can come in at a lower price. And we have to make the budgets stretch as best we can, prioritize.”

Dachowitz said he expects that when the markets normalize, Norwalk will be able to raise funds at a very favorable rate. “So that’s a positive for our timing,” and Norwalk has had the same financial advisor for 18 years, who is now affiliated with a national firm and “we’re going to get the best advice and the best structure and the best yield.”

Connecticut leadership has closed the state until May 20th. State sales tax income has taken a dive.

Connecticut was broke Before COVID.

This is not the time for millions of dollars to be spent on an a new (unnecessary)NHS. The taxpayers do not need this added stress while we are walking the streets wearing face masks!

This NHS pipe dream needs to be put down now. The state is going to have to bond to pay current expenses, not pet projects for one failed Senator. The school is looking good right now, let’s not bulldoze the $30 million that has been poured into it over the past 20 years. We need to spend our scarce tax dollars with a little more common sense, which has clearly left this council.

Just a little view from the south….

No supervision….pump 6 times as much through the capital budget and leave it for the next generation to pay for it. Shame on every person who played a part in this charade.

The current Norwalk High School has never looked better.
What a waste of funds!

What are our options as taxpayers to stop this? I cannot believe Norwalk elected this JV mayor.

Our mayor has proven to be utterly and irreversibly out of touch. I am speechless… We are in desperate need of reasoned leadership. Sigh…

complete disrespect for taxpayers. nobody wants this headache right now

If the Mayor, and others, are concerned about their legacy as Representatives of the age they should take stock that practical decisions override frivolous ones and are remembered and honored by posterity. We are in a terrible fix, stop the talk on extravagant building.

ONE Norwalker at the public Budget hearing streamed via Zoom. ONE.

We do not need this level of spending while the state circles the bankruptcy drain with its unfunded pension liabilities. People will not have the funds for increases in property taxes which will surely come and have been increased every year, even through 08-09 when real estate values plummeted.