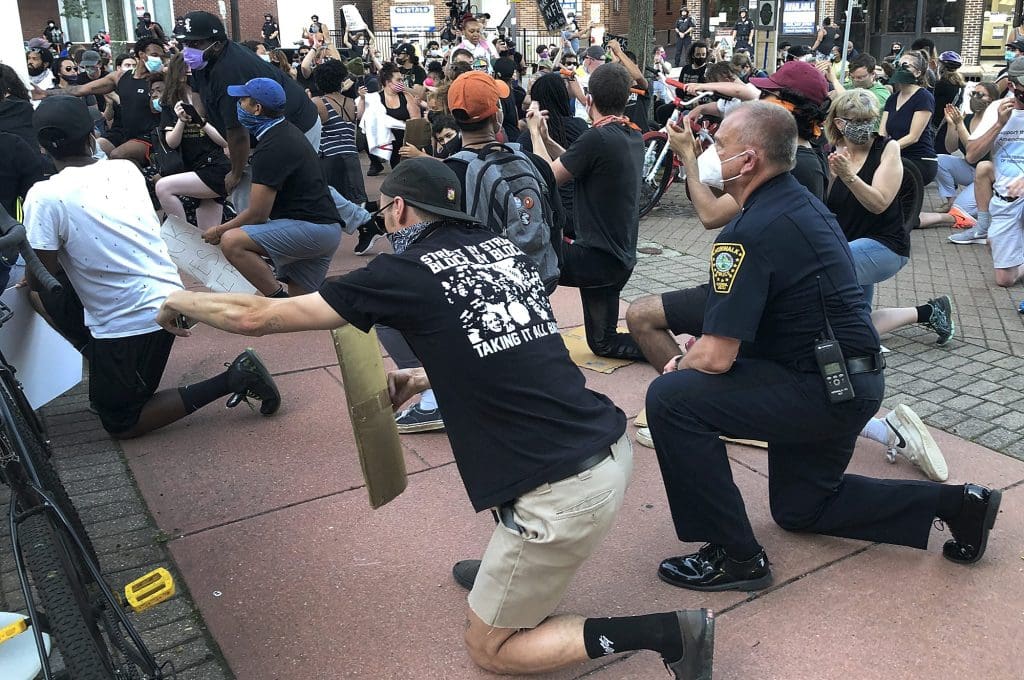 NORWALK, Conn. — The Norwalk Branch NAACP is working with area law enforcement “to affirm our relationship and to assess community needs as peaceful protests ensue in the wake of past and present racially motivated bias and murder,” a statement said.

The statement stems from a June 4 meeting of the Norwalk NAACP Branch Taskforce for Peace,  the State’s Attorney Office and police chiefs from Darien, New Canaan, Norwalk, Westport, Weston and Wilton.

“Collectively, we outlined a common perspective and reviewed best practices in order to support the communities’ right to express outrage, fear and the need for change while maintaining a safe environment for expression. Like so many other communities across the nation, we have been deeply saddened and outraged by the senseless killing of George Floyd and other black lives at the hands of police officers, those of whom society expects to uphold the law and safety of all,” the statement said.

Signing the letter were:

“Other people are having protests,” Penn-Williams said Thursday. “We wanted to sit down, with the chiefs, the people who are really in charge of the police …That speaks volumes.”

Penn-Williams has not attended the recent Black Lives Matter protests out of fear of COVID-19. She recently praised the young people are risking their lives to join the nationwide wave of outrage inspired by the deaths of Ahmaud Arbery, Breoanna Taylor and, as the last straw, George Floyd in Minneapolis.

“Mr. Floyd’s death has led to protests worldwide as the pain and anguish of systemic racism and social injustice has reared its ugly head once again. For far too long, these heinous acts perpetrated on people of color undermine both the hard work of good officers and the positive relationships many have cultivated in our communities. During these difficult times, it is imperative that the Norwalk NAACP Branch, State’s Attorney Office and Local Police departments remain resolute in their commitment in pursuing the goals of fair and equitable treatment of all people. Fostering trust among our communities through a steadfast dedication to public service continues to be our top priority.

“We, the Norwalk NAACP Branch, State’s Attorney Office and Local Police Chiefs believe that taking no action to bring about meaningful change, and remaining silent in the face of injustice and maintaining the status quo, is not an option.  Collectively, we understand that policies are not enough, they are only foundational steps. Therefore, we are committed to collaborating on an ongoing basis to develop positive police interactions and enhance our relationships with people of color.

“Together, we must move from the seat of indifference and silence to stand up and speak out against systemic racism and social injustice wherever it lives because, BLACK LIVES MATTER.”

The June 4 meeting was “one of many meetings” and “we should be meeting very soon, within the next two weeks,” Penn-Williams said.

“In the black, African American, community, we always tell our children ‘do not resist arrest, cooperate,’” she said. The police chiefs “also said the same thing. I don’t know what happened with George Floyd, it looks like he’s not resisting.”

The police chiefs want to partner to unify the community, “have some wholesome events,” she said. Everyone listed above was on the call and spoke, and “it was a great meeting.”

Penn-Williams may want to put some pressure on state leaders failures to address ELL crisis in Norwalk. There are many resources being diverted away from her constituents kids because Norwalk has less state funding than some wealthier enclaves like West Hartford, New Fairfield and others…Why is that? I think that’s a fair question..

John O’Neill is asking the question I ask and can never get an answer. How is it an advantage for black children to have a large influx of people who are not citizens? Diversity? It baffles me that black leaders are silent.

@JustaTaxpaper. Quick question. Are you really concerned about the large influx of people that are not citizens causing our children to be disadvantaged? Or do you and John just want to pin the people of color vs non citizen families. Both of your comments sound like Race baiting. That is what it sounds like to me.

@Ms.Lauren – If you don’t understand that dollars diverted to handle ELL crisis do not effect programs for others in school system we are living on different planets. It’s not the wealthy kids that are effected. Your inference of Race Baiting is bizarre, illogical and disingenuous. That being said, it’s a beautiful Monday morning and the NY Mets still have shot to win the pennant this year
Life is good.