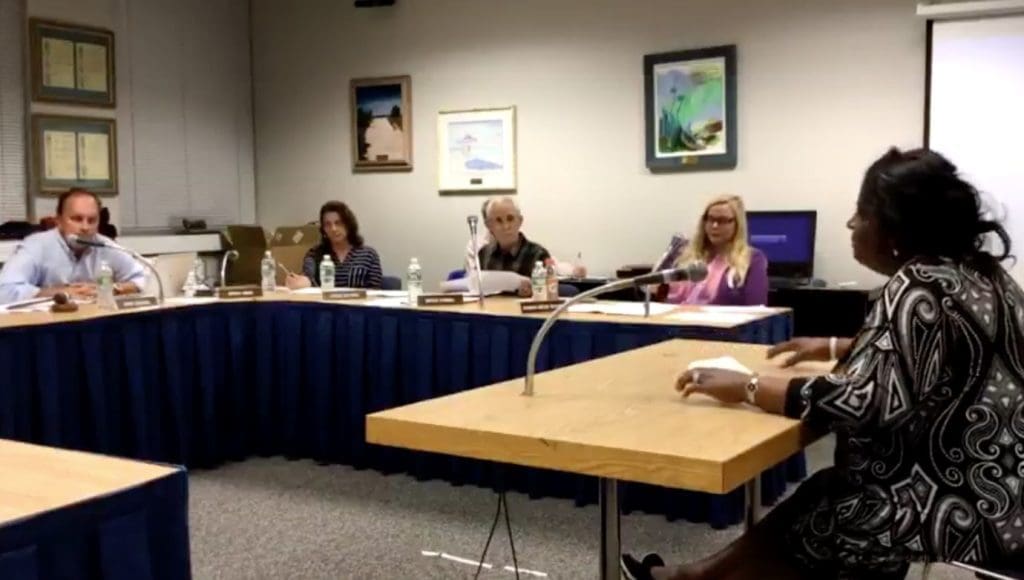 A screen capture from Norwalk Public Schools video of Tuesday’s Board of Education meeting, with Norwalk Branch NAACP President Brenda Penn-Williams at right and BoE Chairman Mike Barbis at left.

NORWALK, Conn. – An unusual back-and-forth marked the early moments of Tuesday’s Board of Education meeting.

Norwalk Branch NAACP President Brenda Penn-Williams, as the only person to sign up for public speaking, charged that the elimination of the Pathways Academy at Briggs is already a “disaster” and then shifted to the “alleged sex misconduct” of Chief of School Operations Frank Costanzo at his previous job.

Unable to keep Penn-Williams to the customary three minutes, BoE Chairman Mike Barbis banged the gavel and raised his voice.  Penn-Williams responded: “Don’t you dare scream at me.”  In the ensuing conversation Barbis said that it’s not Board members’ fault that it’s an “all-white Board.”

Before Penn-Williams spoke, Barbis commented that Norwalk Superintendent of Schools Steven Adamowski would be discussing the former Briggs students in his report.

“Many of us are very concerned about ongoing decisions that you, Dr. Adamowski have made,” Penn-Williams began, pointing out that the “most at risk students” either chose to leave the bigger high schools or were placed in the alternative schools because they didn’t do well in the traditional high school environment.

“I have been contacted by several parents who have complained about the program at both Brien McMahon and Norwalk High,” she said. “I have seen some of the issues with my own eyes.”

Some students are not attending school faithfully and they have more than one lunch period, she said.

“There’s very little learning going on in those school and Brien McMahon, with the approval of (Principal) Scott Hurwitz, teachers are focusing on Go Fund Me pages and making murals for the walls in the classroom for two 90-minute timelines. There are no high academic expectations for these students and you are setting them for failure,” she said.

Students were scheduled for classes they had already taken, and “No one in Norwalk High seems to know how many credits the students have,” she said. “Norwalk High is calling their classes general English, general math, general social studies and general science. These students will be pushed through high school without the skills to enter the workforce.”

“Parents also share that there are low expectations for their children and they have been placed on the computer to do (Edgenuity),” she said.  Edgenuity is a computer program; she charged that students have been Googling and copying answers to do their work.

“After shutting down Briggs, you Dr. Adamowski and the Board will hold the blame for not educating these children and not providing an equal education for all children in Norwalk. Prior to your arrival, Dr. Adamowski, students thrived at Briggs,” she said, “… You also to blame for this disaster and need to fix it immediately.”

Penn-Williams shifted to Costanzo, asking, “What are we teaching and modeling for our children?”

Costanzo and the New Haven Board of Education are being sued in U.S. District Court by Chanel Renee Rice, who alleges that Costanzo sexually harassed her, which resulted in job discrimination. The suit was filed in March 2017; a settlement conference was held Sept. 17 and the parties are making progress toward a settlement, according to the federal courts’ website. The parties are due to report on this by Monday.

“We have employees who have been fired for less,” Penn-Williams said.  She quoted a newspaper story that she said “stated that he was too drunk and did not remember.”

“On or about December 16, 2014, at Rice’s request, Belton held a meeting with Rice and Costanzo to discuss Costanzo’s behavior,” Rice’s complaint states. “During the meeting, Costanzo claimed that he was drunk during the {Christmas} party and could not remember anything about his behavior.”

A motion to dismiss filed by Costanzo’s attorney a year ago states that a meeting “allegedly” occurred on Dec. 16, 2014, and “Costanzo only stated that he did not remember what occurred.”

“Mr. Costanzo has the responsibility over administrating discipline and decisions involving harassment,” Penn-Williams said Tuesday, and Barbis said, “Your time is up Mrs. Penn-Williams.”

“Don’t you dare scream at me,” she replied.

“How many times, I told you. Don’t tell me what I can or can’t do, I’ve been telling you,” Barbis replied.

“I can tell you that you cannot scream at me,” she said.

“You are supposed to obey the rules,” he said, going on to tell her to watch the video, that he had been calm and given her extra time.

“We have an all-white Board making unfair claims to these kids. Unfair. Unjust. Closing down Briggs, most of them are minorities,” she said.

In the back and forth, he agreed that Norwalk is a majority minority district.  Penn-Williams called it horrible that an all-white Board makes decisions.

“I guess when you don’t report everything, I guess you do,” she said.

“We are required by state law to report everything,” he said.

“You are not educating these kids. You are not,” she said. “… I saw for myself.”

“You also told us about High Roads, and we know what happened with that, didn’t we?” Barbis replied.

“Let me tell you something: what I said was High Roads was the truth. You had Joe Russo go over there and he didn’t even do anything,” she said.

Then- interim Special Education Department Director Joseph Russo investigated parents’ complaints about High Road School in 2016 and reported that there was no evidence that the staff abused or intentionally caused harm to students. Penn-Williams has charged that Russo went to the school and sat in an office with an administrator he knew, having a social conversation.

Barbis told Penn-Williams to listen to Adamowski’s report on the Briggs students, and she said she would.

High schools are getting better at dealing with ninth graders, meaning there are less and less students who need extra support to make it through to 12th grade, Adamowski said.

There are 13 former Briggs students at Brien McMahon High School and 11 at Norwalk High, and attendance averages 80 percent so far, he said.

“It’s too high to tell but it’s certainly higher than the overall attendance at Briggs, for any year of its operation previously,” Adamowski said.

The “most involved students” are taking four classes with four different teachers on Edgenuity, “one of three blended learning programs used in the nation” and “the most widely used program in Connecticut,” he said.

The average student is not taking four Edgenuity classes and is able to benefit from the larger high school environment by taking classes they couldn’t have taken at Briggs, he said.  He added that Norwalk lost its state grant for Briggs two years ago and could not offer students “their own guidance counselor, their own supports” but those services are available now.

The “general” courses are just an entry into the schedule, Chief of Technology, Innovations and Partnerships Ralph Valenzisi said.  He noted that one teacher could be teaching three different types of math in the same classroom, for instance, and the “transcript will represent the course they are actually taking.”

Valenzisi agreed with Adamowski that there are more supports available for students and there’s a “more robust health center” for them now.

Board members had an informational packet.

“You can see that there’s a lot of depth and breadth to the opportunities that they have that we would not have been able to offer in a small cohort at NPA with only a core group of teachers,” Valensizi said.

Board member Julie Corbett, who had requested the update, asked for a quarterly feedback report, including input from students. The Board is set to discuss Ingenuity at its next BoE meeting.

Adamowski had begun the discussion by looking at the larger picture.

“In the new world of high schools, everyone is striving to reach a college and career ready standard,” he said. “In the old days, we used to differentiate the difficulty of content and that’s how we got everybody through, right? You might take AP chemistry, I might take everyday chemistry… Everybody got through it and graduated. Now, for every student to reach a college and career ready standard, every student has to take a rigorous program, that’s the standard, so, you have to differentiate time, you have to differentiate support. That’s exactly what this program should be about. I think at one point at Briggs, despite dwindling enrollment, it had reached that level.”

NancyOnNorwalk wrote this story from a video of the Board of Education meeting.

“Some students are not attending school faithfully”. How is that a knock on the school system? Let’s put the accountability where it belongs, on the child and maybe the parent.

What a sad commentary. The achievements of our BOE under Supt. Admamowski are head and shoulders the most positive change in Norwalk in recent decades and a powerful source of pride to our community. Castigating BOE officials in a rude manner does lasting damage.

Ms. Penn-Williams comments remind us of the role the NAACP played in supporting black BOE members claiming discrimination by the entire BOE. A charge offered without evidence. And now we have an all white BOE.

One wonders whether Ms. Penn-Williams is aware that the nation’s most prominent hi-tech black CEO heads a billion dollar international software firm headquartered in Norwalk. We’d all benefit from local prominent black leadership emerging and contributing to our City. .

This article was brought to my attention by a colleague. I’m afraid I do not know anyone who contributed to this meeting. And I’m pretty sure I’m not supposed to respond to public articles – however, I find this report rather demoralizing.

I teach in this program. “General English” allows me to design different classes for individual students, based on credit they need and on skills that are most relevant to today’s workplace. For example, I may remove a unit that is clearly antiquated and replace it with a unit on persuasive writing, which better reflects common core standards and other trends in English education.

I supplement the instruction every day with additional reading, analysis and writing assignments that students can draft and revise in class. I work incredibly hard at synthesizing material to provide it in the most effective and efficient way. When students are ahead, I can coach them in researching post-graduation plans, in reviewing brochures & college catalogs and in writing college essays, which several students have already started to do.

If there are disagreements about the Board’s plans for the former Briggs program, They should have no bearing on your evaluation of current efforts.

We support, cheer, feed, reward and sometimes beg students to hang in there with us. We meet weekly to discuss how we can improve or enhance the program and how we can ensure that students make adequate progress toward graduation.

No one is left in front of a computer. No one is updating their gofundme page or checking their messages. If students are not cooperative, minimal progress would be made – and parents are then contacted and the level of completion is reflected in course grades. Recently, I recently reached out to several families to offer extra instruction on Saturdays.

There is no – NO – lack of focus, instruction, or integrity. When students are absent, we worry about them. They are missed. We take every part of our profession very seriously.