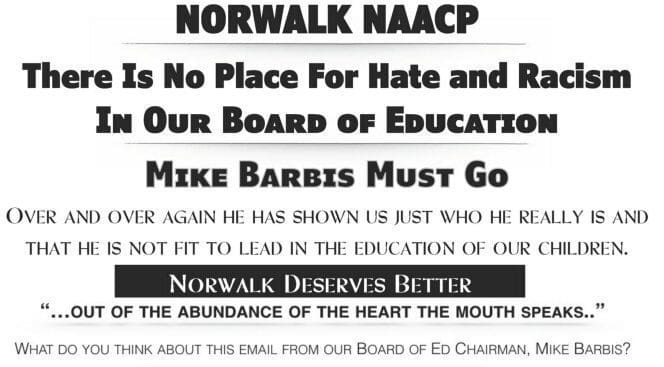 An excerpt from a flier distributed by Norwalk Branch NAACP President Brenda Penn-Williams. 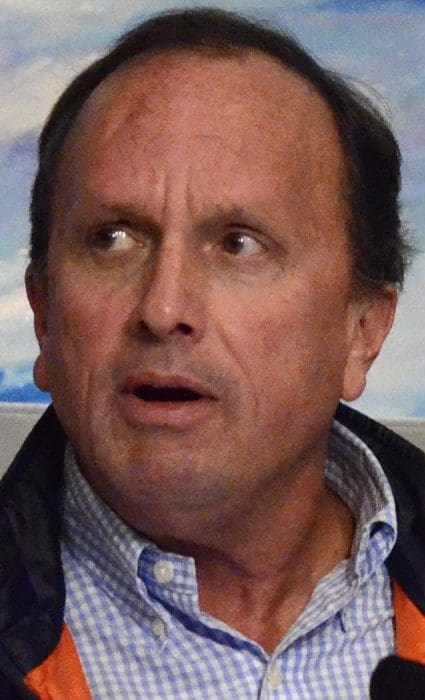 NORWALK, Conn. — The controversy over comments made by Norwalk Board of Education Chairman Mike Barbis continues:

“There Is No Place For Hate And Racism In Our Board of Education,” a Norwalk NAACP flier states. “Mike Barbis Must Go.”

The flier, released Saturday by Norwalk Branch NAACP President Brenda Penn-Williams, asks concerned citizens to attend the Nov. 19 BoE meeting, where officers will be elected as the new Board term begins. It includes NancyOnNorwalk’s nearly word-for-word depiction of a profanity-riddled email written by Barbis, BoE Chairman, in June, calling South Norwalk Democrats “a****” and “SCUM,” and suggesting a news headline of “Blacks {f***} Latinos”, angry words inspired by pushback on the plan to demolish the current home of Columbus Magnet School.

“Over and over again he has shown us just who he really is and that he is not fit to lead in the education of our children,” the flier reads. It goes on to urge people to attend to “send a clear message that enough is enough of hatred and racism in our community and that we stand united against it.”

About 40 people attended an NAACP meeting Thursday in  response to the leaked email, where former State Rep. Bruce Morris (D-140) observed, “There’s no way in the world this man is going to resign.”

If every Norwalk citizen raised his or her voice in protest, Barbis would go, he said, adding, “I don’t have great hope now I wish I could.”

One person defending Barbis is Planning Commissioner Nora King, one of his neighbors and a long-time friend.

“Except for the inappropriate language – everything in that email was spot on with many of our elected officials feeling the exact same way. They just didn’t put it down on paper,” King wrote in a NancyOnNorwalk comment.

In his June 19 email, Barbis named Common Council President Tom Livingston (D-District E) among those he was unhappy with.

“Not one representative from South Norwalk, not one”

“Screw building schools in South Norwalk – if those {a*******} don’t want them, let’s build them where they do”

Morris and then-Council member Travis Simms fought the Board of Education in its effort to build a new school in South Norwalk. Morris urged more public input. Simms decried the plan to use part of Springwood Ely Park for the new school behind the Nathaniel Ely Center.

“They are trying to gentrify the city and push the poor people out of the city,” Simms said in early 2017. “… I think it’s not broken that our kids are bused out. I am willing to spend that money in my taxes to make sure our kids are bused as long as they are getting the education that they need.”

The “screw building schools in South Norwalk” is a sentiment that has been expressed before.

It’s been said that Norwalk is the only place in the nation where residents of a poor urban neighborhood are resisting an effort to build a new school in their midst.

The proposed Ely school, which doesn’t have its final state approvals yet, would be the new home of Columbus Magnet School. The existing Columbus building would then be renovated to become an International Baccalaureate (IB) School, under the plan as originally approved.

This makes both buildings magnet schools. The talk had originally centered on creating a neighborhood school for South Norwalk, but the state’s racial balancing mandates made that impossible.

King’s comment came on on Friday’s story regarding State Senate Majority Leader Bob Duff’s call for Barbis to not take his oath of office.

“Bob is delusional if he {thinks} the BOE isn’t in a better place today because of Mike B, Mike Lyons, Heidi {Keyes}, Byran {cq} M. and others that supported putting kids and schools first. Brenda Penn Williams and her crew for years suppressed growth and progress in academics and our school system,” King wrote. “The only sad part to the election on Tuesday is having an entirely Democratic Board. The Board of Education has no place in politics and it should not be about political party.”

The difficulties in choosing a BoE leader

While NAACP leaders don’t want Barbis to continue as Board of Education Chairman, their first choice is less clear.

It can’t be a new member, former BoE member Shirley Mosby pointed out during conversation after Thursday’s NAACP emergency meeting. Bruce Kimmel, who said he’s running for chairman, was disdainfully ruled out as having been copied on various Barbis emails and therefore deemed part of the problem.

Sherelle Harris is definitely qualified as a former BoE member but probably wouldn’t want it, the group said.

LeMieux responded with sensitivity after the first offensive Barbis email was released (through a NancyOnNorwalk Freedom of Information request), they said, describing her as thoughtful and considerate.

“That’s very nice of them to say and I genuinely appreciate the compliment,” LeMieux said in an email. “I recently went back to work teaching during the day for the first time since my younger kids were born, and I just don’t have the bandwidth to do it. I’m glad that Dr. Kimmel is interested in being chair – I think his long experience as a public school teacher and his experience in Norwalk city government will be an asset to us if he wins the position.”

Board members are volunteers. Barbis, Kimmel and Meyer-Mitchell appear to treat the Board as an unpaid full-time job.

New members of the Board will be sworn in on Nov. 19. The Board will then elect new officers. New to the Board are Godfrey Azima, Diana Carpio and Erica DePalma. Harris and Barbis will be starting new terms. Also voting will be Heidi Keyes, who is midway through her third 4-year term.

“I’m not interested in the chair position as I have a very busy full time position,” Keyes wrote in a Tuesday email. “I fully support Bruce and am glad he is willing/interested in taking  on the role of chair of the BoE.  His many years experience in the classroom as a public school teacher is a benefit. He will be able to devote the time that is required in this very important role.  In addition, he has held various roles in city positions and has strong ties in the community.”

Isn’t the job of selecting a Chair up to the BOE members themselves? It is not in the purview of any outside organization to select the Board of Ed Chair. The BOE was duly elected by their consittuents. Now let them do their job.

While the NAACP protests on the 19th I would hope they direct their wrath at elected leaders on Hartford for ZERO support of Norwalk ELL programs. It may be more subtle than Barbis issue, but more hurtful to Norwalk African Americans. I’m still baffled about their apathy about that issue.

Baha hahaha!! NAACP says enough? If they did a single thing for their constituents I’d buy into it. However, that’s not the case.

Anybody who thinks busing is okay should be voted out. Everything should be done to avoid busing, it’s a waste of time and money. Everyone from the student to the town suffers if busing keeps going on. They found space for a mall but not a school?

Babar – it drives me crazy when people say stuff like that. #1 You must understand that if the city wants to build a school it can a) build it on land it already owns b) buy land from a private owner or c) take the land by eminent domain and pay the owner fair market value for it. There are pros and cons to all options. The only land the city owns in south Norwalk is a park. That’s where they were going to build it. There’s some pushback to losing the park. They could buy a bunch of houses and knock them down. That’s expensive and would displace to a lot of people. Not great options. They could buy commercial property but then putting businesses out of business, dealing with environmental clean up, plus that land is really expensive. It’s not as easy as “they found space for a mall”. #2 you also must understand the city didn’t build the mall. You get that right? It was a private company that bought a piece of land for like $30 million dollars and they decided they wanted to build a mall there. Geeze.

Bobby Lamb, that was meant to be a rhetorical question but thanks for all the information. The town is involved is all major developments in one form or another. We saw how Amazon was kept from coming into NYC by the local citizens. Private citizens have more power than they realize sometimes. I just learned the Milligan lawsuits have cost more than half a million dollars and the recent accounts payable scam issue cost around the same from what I’ve read. The city does have money to burn/spend, it’s just not done wisely always.