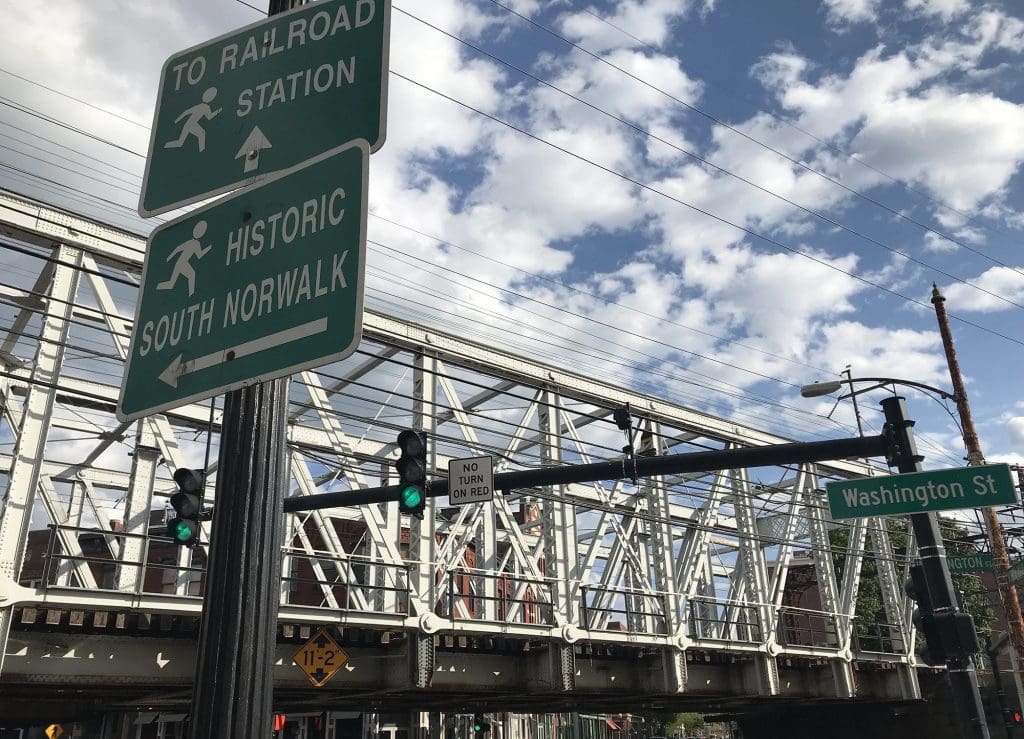 Signs in SoNo. A 2016 $48,900 plan for wayfinding throughout Norwalk’s urban areas was rejected twice by Common Council members; the ball is now in Norwalk Chief of Economic and Community Development Jessica Casey’s court.

NORWALK, Conn. – With five months till the opening of the SoNo Collection, a citywide initiative to guide visitors to and from the mall and other local attractions has yet to find its way out of Committee. Former Mayor Bill Collins says that could leave out-of-town shoppers lost, and create problems for Norwalk residents.

“Maybe several people have dropped the ball. With the imminent opening of the mall, somebody better pick up that ball and run with it,” Collins said.

Three years ago the Norwalk Redevelopment Agency authorized a study known as the “Wayfinding Program Message Schedule” at a cost of $48,900 for the initial phase, to be done by design firm Merje. Common Council members twice refused to move the initiative forward, Agency Executive Director Tim Sheehan told Collins recently.

“The serious question is what is happening to the Wayfinding Study (many thousands of $ later) which would tell folks coming to town from various directions how to get to various things and how to get back out of town,” Collins wrote Saturday.

Others don’t appear to share Collins’ concern about the mall opening without signage to direct people. Norwalk Communications Manager Joshua Morgan said wayfinding is a city-wide initiative rather than a mall-centric one, and people are used to digital navigation aids. The SoNo Collection will have signs posted to nearby facilities, and there will be signs guiding motorists to the mall and other attractions at highway off-ramps.

Council members refuse ideas; a delay due to reorg?

Collins mentioned the study at the May 14 Norwalk Redevelopment Agency meeting, saying he’d been told its implementation would coincide with the opening of the mall. “So far, I haven’t seen anything about going out to bid on implementation or seen anything in minutes or newspaper reports or anything,” he said. 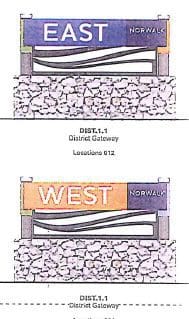 An illustration from the wayfinding study done by Merje.

Sheehan said that following the reorganization of city departments, wayfinding is no longer a Redevelopment Agency issue; it falls under the jurisdiction of the Pedestrian and Transportation Department overseen by Jessica Casey, who began work in January as Norwalk’s Chief of Economic and Community Development.

Sheehan agreed with Collins that the Redevelopment Agency felt the study results were “adequate” to send to the Council, but without Council approval, no request for capital funding could be made to implement the plans.

“We may have a surplus of stop signs in this government. I’m not sure,” Collins replied, in jest.

Collins said there is much detail in the Merje plan, which would take time to implement and would require coordination with the state, since Route 1 and Route 136 are state highways.

“If you are a stranger from Waterbury… what do you know about downtown Norwalk? That’s like me in Waterbury: Hello?” Collins said. “There’s a tremendous amount of work to be done and it’s pretty well laid out in that report but it requires organization, scheduling, hiring contractors, things like that, that we haven’t done any of.”

In a May 16 email, Morgan stressed that wayfinding is in the works for the entire city, “not specifically for the mall or tied to the mall opening in October,” and called the Planning Committee’s dissatisfaction with previous submissions “a great opportunity to revisit what appropriate wayfinding for the city should look like for those who live, work, and visit Norwalk.”

He also noted that with more people using mobile apps and GPS to get around, the city needs to work with these providers “to ensure they are directing shoppers and visitors to the appropriate routes.”

“The Attraction Sign program is intended to provide a predictable and recognizable system to help direct motorists to nearby attractions,” the Connecticut Department of Transportation states on its website. Facilities/businesses must meet certain criteria to get on the sign, Judd Everhart said, adding, “We don’t go looking for facilities/businesses to sign for, they’re required to apply to participate in the program.”

Anyone headed to the mall via Route 7 will see a sign to help them find their way, according to Connecticut Department of Transportation (ConnDOT) Director of Communications Judd Everhart.

A large attraction sign will be posted on Route 7 southbound between the Exit 1 off- and on- ramps and a smaller one on the South Norwalk off-ramp will direct drivers to the proper lane, Everhart said. These signs will cost approximately $25,000 and are expected to be ready by Oct. 10.

Wayfinding is “really important” and there’s been a lot of talk of it recently, Casey said at the May 16 Parking Authority meeting. 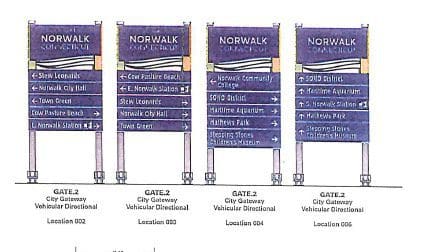 An illustration from the wayfinding study done by Merje.

“I think wayfinding is difficult in all of the cities that I have worked in, wayfinding is actually an extremely difficult thing to get (agreement) on and actually implement. But it’s extremely important and we need to take that on,” she said.

Wayfinding and branding play into each other now, Casey said.

The right signs can also slow traffic or improve its flow, and guide pedestrians, she added.

Planning and Zoning approved a SoNo Collection sign plan, that, in Collins words, “points drivers to various attractions when they leave the mall.” 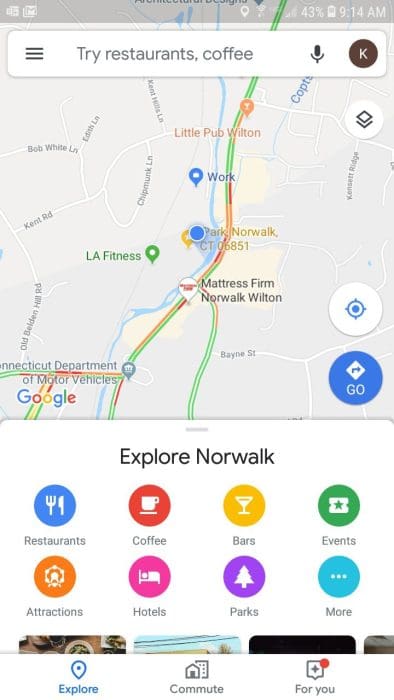 A screen capture of “Explore Norwalk,” showing the ability to find restaurants, etc., by using a phone. (Kevin Kane)

State plans are telling people how to get off the limited access highway, Collins said Saturday, asking what happened to the wayfinding study.

Getting bogged down in the Council Planning Committee is the same thing as getting bogged down in the Redevelopment Agency because the same staff members are involved, Collins said.  “Still no clue how to get from SoNo to NoNo or vice versa, or how to get to the train station from anywhere or vice versa. Aquarium? Forget it. East Norwalk? Maybe it’s a different town.”

Hope they actually proofread these before producing them. “Cow Pasture Beach” on the left sign in the third photo.

So with all of the property tax money we pay, the city doesn’t have time to put up some signs to minimize the potential traffic impact of the new mall.

$49,000 study?!. This study seems like the objective is Wastefinding, not Wayfinding, whereby money is spent on those items that are a waste. You can’t make that up….spending money on fake problems the private sector handles just fine.
Call me crazy but there is this thing called Google – ever heard of it? Well, it has this feature called Maps and if you turn on your phone’s location setting, up pops Explore Norwalk followed by….get ready: Restaurants, Coffee, Bars, Events, Attractions, Hotels, Parks and by clicking More, 39….yes, 39 different categories are listed including Parking and even Mail & Shipping.
See screen shot attached.
A few signs labeled Mayhem, I mean Mall, out on 95 and 7 with some arrows ought to do it. Scrap the study before it starts.

Question: How much does Stew Leonards pay to get on those signs ?

If I were a private business owner I’d be asking why my name isn’t publicized using tax dollars. A fast look here; https://www1.ctdol.state.ct.us/lmi/EmpSearchTopList.asp?intSort=3 shows that the iconic national brand “Pepperidge Farm Inc” employs multiples more than Stews. How did a grocery store get on par with a national brand, the Maritime Aquarium and Stepping Stones as tourist locations ?

*** full disclosure: the kids will tell you that I often say “I wouldn’t shop in the labyrinth that is Stew Leonards even if everything was 10 cents and they handed out free buckets of dimes at the door…”

I can find no way to insert an image into a comment so I put Kevin Kane’s screengrab into the story.

Jim, we asked how they determine who gets on the signs. ConnDOT spokesman Judd Everhart provided this info:

“The following link contains an explanation for applying to participate in the Attraction program. This link also lists all of the minimum requirements for a facility/business to meet.
https://www.ct.gov/dot/cwp/view.asp?a=3199&q=607234

Nancy,
As always, you are prompt, precise and to the point (please, national journalists, take notes!).

Since any continued comment on my part would be opinion, not fact, I will take the subject offline.

Wayfinding signs on 7? How about a nice map through Norwalk neighborhoods connecting the parts of 7 and 15 that 40 years later still don’t connect? Who needs a functioning highway system, when we can have signs telling us where to go. Here’s one for I95: Merrit 15 North via West Rocks Rd. 30 minutes.” Duff can retweet this when he’s not busy blaming Republicans for everything.

I’m sure out of town visitors in their 7-series BMW’s will be just fine after shopping Nordstroms and having navigation and multiple iphones.

For almost 30 years I’m still bemused that there is no sign on I-95 indicating that taking the Hutchinson Pkwy gets you to the airports. Genius!!

As I am reading this I see a comment from Collins re: How would a stranger from Waterbury do to find the mall?” Begs the question as to just how many people from Waterbury are compelled to leave their town just so they can go to another town just to go to a mall ? Really, this is the target audience for the way-finding dilemma / fiasco. I will defer to Kevin Kane “ ever hear of Google ?” . . . Maybe Norwalk should fix this the roads first before asking tourists to visit — just a thought.

I’m not sure if it’s the citizens of our town, or the people running the town, or both but it seems like the mental faculties of everyone involved in this must be called into question. We’re sitting here debating a $50,000 waste of taxpayer money to solve a ‘problem’ that GPS on every smart phone and in most vehicles solved well over a decade ago… because apparently it’s an issue for people to figure out how to get in/out/around a town… unreal.

These prices are astronomical. 25K per sign, can we get a breakdown on this cost? You would think with the amount the order they would get some sort of break. I’ve seen these attractions signs up north on 95 from East Haven to North Stonington and they are blank. Why did taxpayers pay for these. I would think the program and the advertisers on them should pay for it.

46K for a study! What are they studying? I thought bids went to the lowest bidder. This seems like way too much money to spending.