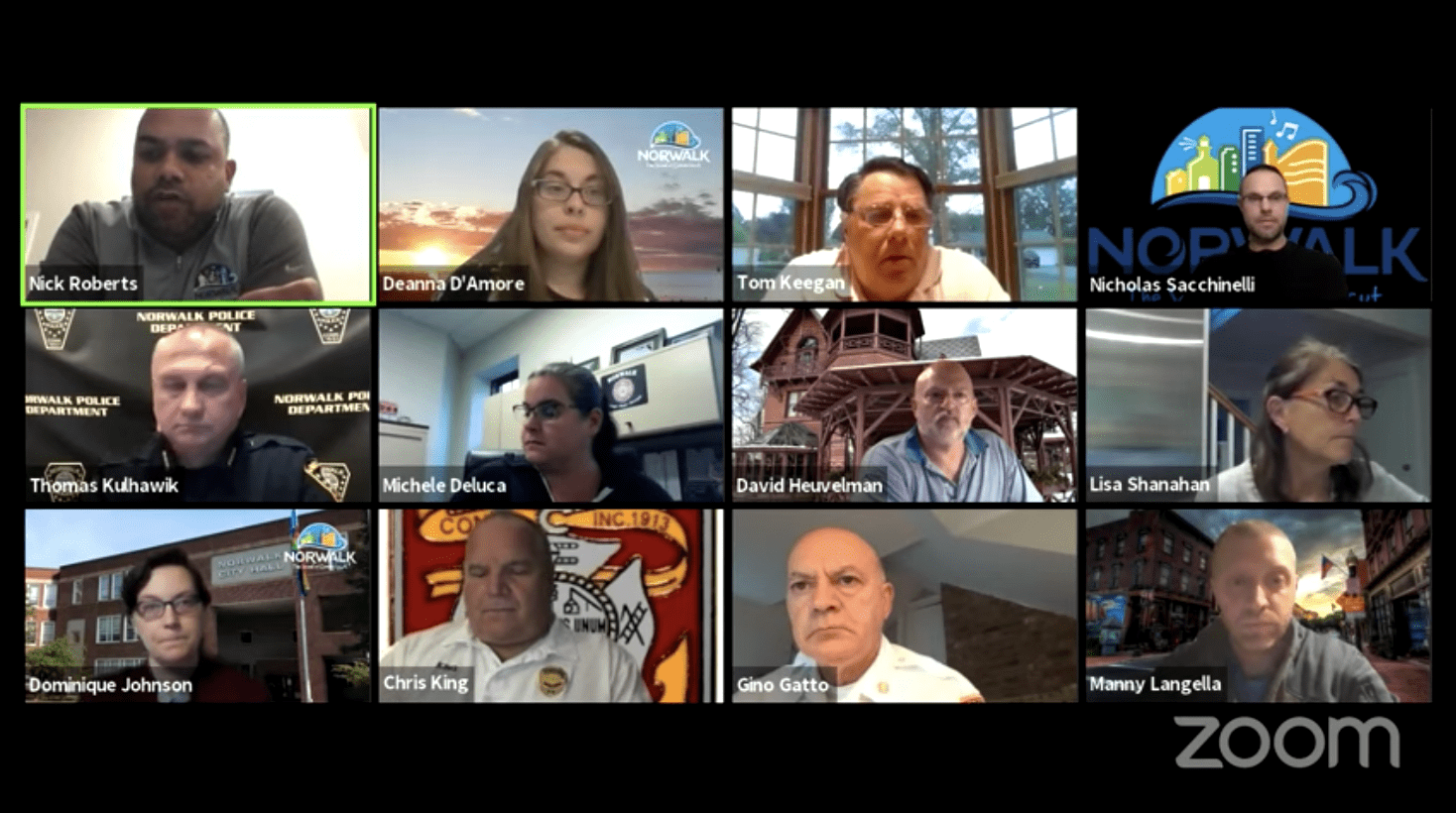 The Norwalk Health and Public Safety Committee gets updates on the City’s response to COVID-19, during its Thursday virtual meeting.

NORWALK, Conn. — As Norwalk begins its reopening process, officials from the police, fire, recreation and parks, emergency management and health departments provided updates Thursday on their response to the COVID-19 pandemic.

“This is a slow and phased reopening,” Nick Roberts, director of Recreation and Parks, told the Health, Wellness and Public Safety Committee of the Common Council.

Roberts said that as of May 20, all of the city’s parks and recreational facilities have been reopened, with specific areas, such as picnic tables and playgrounds remaining closed, and limits on capacity put in place.

Some residents, he said, are upset that things are not fully “back to normal” yet.

“Just because we’re reopened, they expect everything to be back at its normal conditions, but it’s not so,” he said.

More things will continue to open as Norwalk and the state of Connecticut move through its reopening phases, he said.

Phase 2 could start on June 20, and that would include lifeguards on duty at the beach on weekends and parking capacities increased across parks, except at the beach, he said.

“As we get to Phase 3 and 4, we’re getting back up to our normal capacity levels,” he said.

“We have not had any staff members get sick during the duration of this event,” he said.

A decision has yet to be made on summer camps, he said, but could be coming in about a week or so.

Deanna D’Amore, Director of Health, said that her office is continuing to monitor the number of cases and will continue to do so as the city reopens. She reported that Norwalk has had 1,997 cases so far, and 130 residents have passed away.

“We do continue to see the cases down now,” she said. “(We’re) continuing to follow very closely as we reopen.”

Her department has also been working with the city’s volunteer Emergency Response Team members, who have been supporting a range of needs in the community, including working with Person-to-Person to pack food in the food pantry, deliver food to those who are homebound, stitch homemade masks, make outreach calls, and help with contact tracing. Nurses from Norwalk Public Schools have also been “an incredible resource,” she said.

“I just can’t thank them enough for all they’ve been doing for us,” D’Amore said.

The next piece of work is enforcement as businesses, such as restaurants and personal care services start to reopen with the next few weeks to make sure they’re following the state guidelines for social distancing and PPE.

“A big thing for us moving forward is thinking about vaccination,” she said, adding that’s not just about a future COVID-19 vaccine. “We believe there’s going to be high demand for the flu vaccine.”

However, distributing vaccines where people come into the Health Department, sit around and wait, wouldn’t work in this time. Because of that she said they’re working on a “drive-thru” vaccine distribution.

Police Chief Thomas Kulhawik said while COVID-19 hasn’t affected the department’s staffing in terms of officers getting sick, it has impacted their ability to interact with the community.

“I’m afraid we’re losing a lot of that community policing and community involvement,” he said. “We’re trying to do some other things, (but) we’re not able to be out there mingling like we used to.”

Kulhawik said that most people are now interacting with officers where there are calls about enforcement.

Throughout the pandemic, overall call volume has been way down, he said, but now that the weather is warmer it’s starting to pick back up.

“The biggest issue we’re facing right now is the enforcement,” he said. “We’re starting to get calls about social distances and people not wearing masks.”

Kulhawik also credited Norwalk EMS for handling many of the COVID-19 cases.

“Norwalk EMS has done a tremendous job, they’ve taken the brunt of the COVID calls,” he said, adding that it has prevented the police officers and firefighters from being “unnecessarily exposed” to the disease.

Michele DeLuca, Deputy Director of Emergency Management, said that she’s working to provide small businesses with PPE through the state’s program. About 700 businesses requested PPE last week she said, with about 200 this week.

“I do expect that to probably continue for a couple weeks,” she said.

DeLuca said that this also allows them to have a point of contact with the local businesses and provide them with additional resources.

Her office is also starting to think through “how we change things in terms of a pandemic” if there was a storm that required people to leave their homes.

“If we have a big storm, we can’t necessarily get 400 people in Brien McMahon High School,” she said.

Fire Department Chief Gino Gatto said that his department has adopted new protocols for responding to calls during the COVID-19 that include what kind of PPE the responders need to put on, what types of interactions are allowed.

So far, he reported that they had one positive case of someone in the fire department testing positive for COVID-19.

It is appreciated that the Norwalk Health Department Director of Health Deanna D’Amore can give the reported COVID-19 “cases are 1,997 and 130 residents have passed away.”

Do we know the racial make up of those two numbers? I’m asking because if any one race within the Norwalk community is hardest hit, we take some action.

For example making sure that population has information about social distancing, wearing a mask and all the ways in which COVID-19 is spread.

Perhaps that racial breakout of those numbers, as they increase or decrease and the racial make up of them could be added to the Norwalk Health Department website; if it isn’t already there.