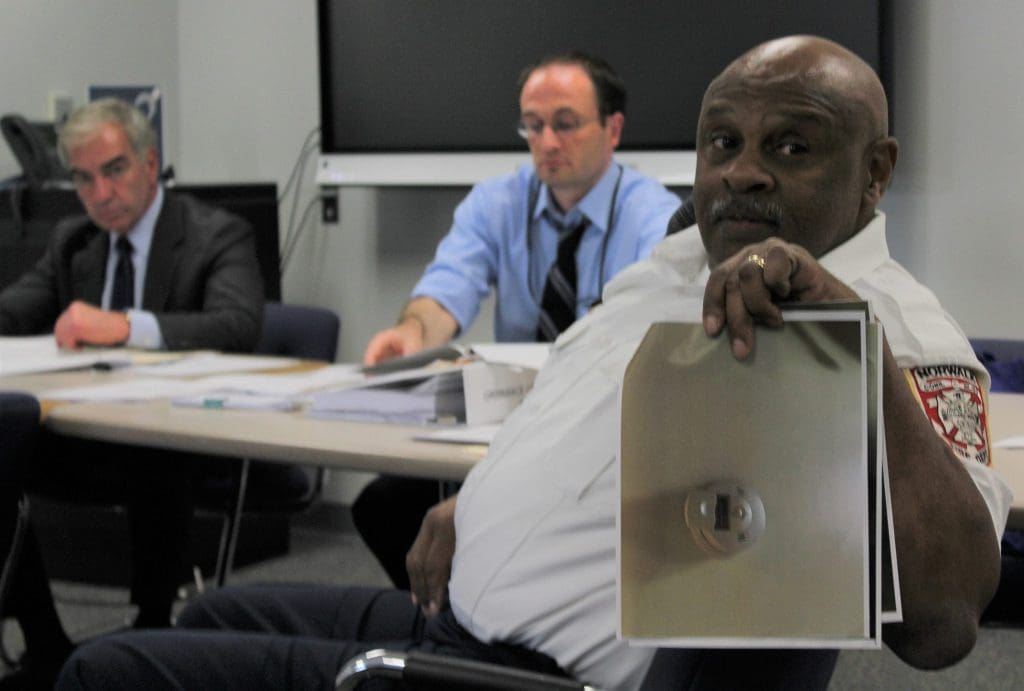 NORWALK, Conn. — Annual fire safety inspections of buildings, factories, and multi-family homes would be mandatory under changes to the local ordinance proposed by Fire Marshal Broderick Sawyer and Fire Chief Gino Gatto and advanced by the Common Council Ordinance Committee.

Sawyer brought a melted red extension cord to Tuesday night’s meeting, to demonstrate how an inspection prevented a fire. The cord was discovered in a foreclosed storefront, an illegal home to tenants paying $1,000 a month. Found by chance, the cord had been stretched from another shop to provide electricity.

Overcrowding fuels the problem in Norwalk, Sawyer said, with two-family homes often housing up to five families. He said he routinely carries smoke alarms with him in his car to install on the spot when he finds potential hazards.

“The new ordinance will enhance the Fire Marshal’s access when illegal apartments or a hoarding situation is found in a one or two family occupancy,” Sawyer said in a Thursday email.

He also explained that what he meant by “overcrowded two-family homes” was “there are homes where family members live together, not just two family homes, what I mean by that is a family may own a home where they have several family members residing together. It could be considered overcrowded but not necessarily illegal. If we find that egress is compromised in these situations that is what we look to keep clear in the event of a fire with these additional statutes.”

There are “approximately 10-15 complaints a year in regard to illegal apartments/overcrowding,” Sawyer wrote. “Is that a lot of complaints? Not necessarily. Generally we respond with the Health department on these complaints, many anonymous, and many times find the complaint was frivolous. Many times due to someone from the large family taking up too many parking spaces on the street, making too much noise or some other reason. No matter what we will still respond to the complaint.”

In other action on Tuesday, the Ordinance Committee approved a proposal by the Board of Ethics to allow the dismissal of complaints against public officials and city employees that are made public prior to a finding of probable cause.

The vote followed a public hearing that was unattended. 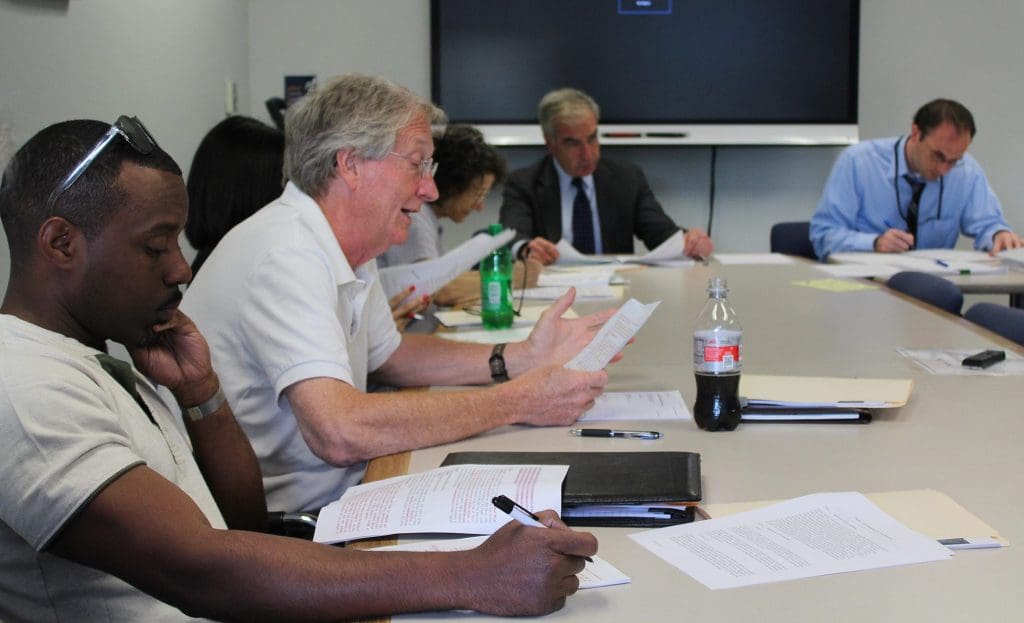 Common Council President Tom Livingston (D-District E) asks Board of Ethics Member Kara Murphy about the language of the Code of Ethics on May 21. (Melanie Espinal)

Consider an amnesty program to bring the apartments out of the shadows.

Builing and fire are life and safety issues whereas zoning is complete fluff.

If we gave 1 year to get the “illegal” apartments compliant with building and fire to earn permanemt zoning amnesty then we would live in a safer city.

With current zoning the many 3rd units in 2 family zones could never be “legal” under current zoning even when they have existed for decades in some cases.

Many times it is a small technical zoning issue that prevents apartments that are otherwise legal from being legal. For example a 3 rd flr studio apartment would require 2 off street parking spaces. Or it is possible to be one foot shy of “legal” lot width.

These “illegal” apartments provide a decent supply of affordable housing, something that most folks seem to want.

Instead of cracking down and removing them from circulation lets find a way to encourage owners to at least comply with the life and safety, and relax the zoning for a minute.

Btw, other towns have tried this successfully. Monroe is one of them.

I disagree with the Mr. Milligan and think this ordinance is long over due. This is a problem in Norwalk and something needs to be done, when an illegal apartment burns down and someone is hurt the city will be on the hook.

Anyone visiting a Norwalk Big Box, especially a Big Box Grocery and look around for the Fire Exits wondering how shoppers and employees would evacuate in case of an emergency ?

5 families in a 2 family apartment??? What??? We have zero stomach to solve much of what ails Norwalk.

Establishment of appropriate laws and codes is the first step. The next step is enforcement, but enforcement is a concept proven to be absent from Norwalk City Hall’s repertoire. The bloated staff earning good pay seemingly bears no responsibility for our city’s safety and quality of life.

Piberman
All on need to do is use the fire doors. They are
clearly marked with an EXIT sign.

Does the fire department refer zoning violations to the chief code enforcement official?

BTW- Did the finance department refer violations they stumbled on to other departments as well?

How can (1) 2 family home house 5 families and be legal?
How do we pay for the city services and education used by 5 families off of the real estate tax generated by a 2 family structure

No wonder this cities single family property values are not keeping pace with adjacent communities.

Al Bore what do you disagree with?

Nobody dies if you land area is 100 sf shy of 3 family zoned lot.

Getting the dangerous “illegal” apartments safe shoukd be a priority. That can be done with amnesty and enforcement.

If there is no way to get legal than the ilegal apartment owners will keep them hidden.

No opinion on max occupancy. That is a very tough regulation to enforce. Who will monitor how many people sleep on each bedroom? We can station one government employee in each apartment to monitor or we can outfit each apartment with big brother cameras.

Zoning doesn’t make the apartments illegal that is like saying speed limit signs make speeding illegal. Zoning and laws are put in place for a reason and should be followed we don’t allow people to break the law and then take the law away so they don’t get in trouble for breaking it. I know you Jason you are a lot smarter than that I hope. Norwalk has zero enforcement lackadaisical zoning all which bring down the quality of life for home owning taxpayers. Sorry to say they still wont do anything if by chance the CC passes the ordinance. Right now they have bigger fish to fry they want to ban plastic straws.

Zoning changes and has created some of the illegal apartments.

They were not all built recently or deviously.

Zoning only started in 1929 in Norwalk.

My other points are that zany nit picky zoning regs are often the only thing causing an apartmwnt to be ilegal or preventing owners from seeking legality.

I am not suggeating rwwarding ruke breakers per se. I am morw arguing for bwtter zoningv regs that would legalize many of the ilegal, but safe units.

Btw i have lots of routine fire inspections and the Fire Inspectors are very happy with our units.

Developers always complain about regulations, because it hurts their money generation, no surprise. Developers will always benefit from less regulations.

Two family homes are hosting FIVE families?! Why is nothing being done about this? Is this why in parts of SoNo I often see up to five satellite tv dishes on a tiny home? Are these kids going to our schools on the taxpayers dime?
No wonder Norwalk has changed so much, and not in a good way.
We are drifting further and further away from Stamford’s success, and closer and closer toward Bridgeport’s demise.

Who gets hurt by illegal apartments? Everyone except the landlord.

Oh- I forgot- the politicians ( democratic only) also benefit by thinking they are increasing their potential voter pool.

My street is lined from one end to the other with cars – it was not this way years ago. Now one 3 bedroom house has 6 adults and 5 children in it. I guess I should be happy – it use to have 8 adults! And forget about the 2 family house – there are now up to 10 construction workers at a time (driving cars with TX plates) living on the “third floor”!

Giving illegal apartments amnesty set a bad precident and is a terrible idea. It rewards illegal behavior and punishes those who play by the rules.

The Fire Marshal needs to be more aggressive with enforcement. Illegal multi family units are a death trap. City officials should be held accountable and face criminal prosecution in the event of a tragedy. A Zero tolerance approach unless he and others in City Hall want to go to jail.

This November should be house-cleaning time at City Hall. Norwalk bureaucrats and politicians represent themselves, not us. They’re ruminating about the need for basic safety? Dump them all.

We’re fast approaching a 50/50 owner occupied versus multi unit rental market in Norwalk. City Hall only enforces policies that punish homeowners not paying their property taxes – by putting their homes on the chopping block. This is not sustainable when increasingly it is the rental and multi-unit market that is generating the increased city costs in the education 60% budget and fire safety department (multi units appear to generate more fire calls.) This administration refuses to discuss finances, instead inflating the grandlist temporarily to buy votes this November. I intend to make these fundamental economics a cornerstone of my campaign.

I see there is still some confusion regarding the Fire Marshal’s Office that I would like to clear up. Please contact me directly at 203-854-0248 or [email protected] so I can clear up any confusion.

I have been living in a rooming house situation for six months. Illegally occupied by 5 tenants (2 br. House). The owner illegally tried to make it. 6 by living in the attic..there are multiple fire and health violations. No C of O. And the house passes inspections! Tenant Complaints ignored by the city. We were actually called crazy. I am recently divorced and just wanted a simple room temporarily. Did I mention the landlord spends the security deposits? This is insane.