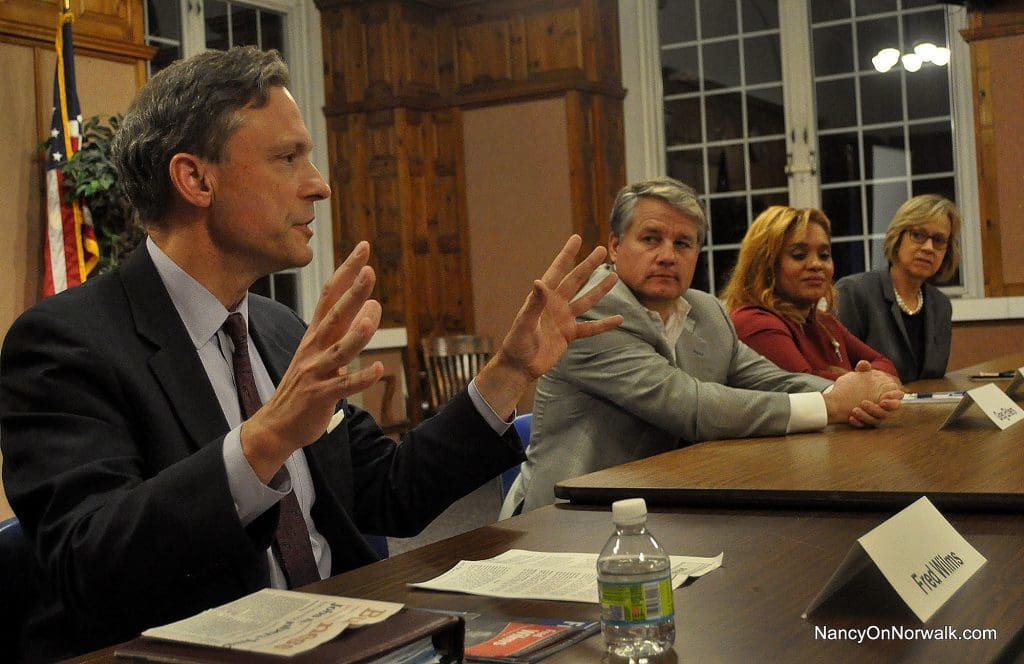 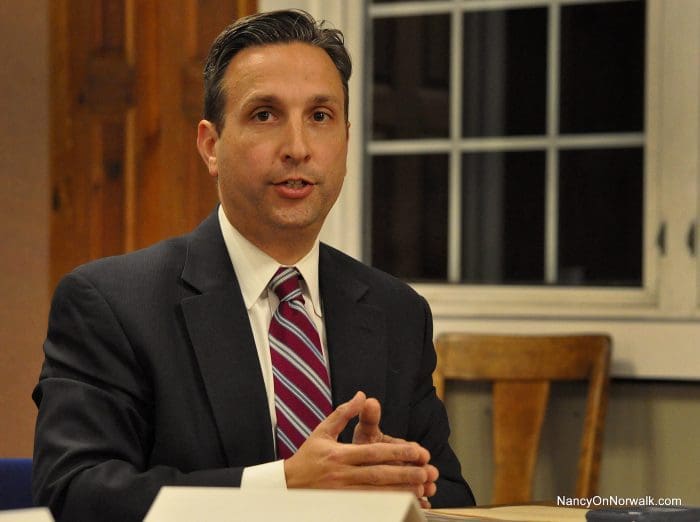 NORWALK, Conn. — It would be good to get to work on reforming Connecticut’s educational funding system ahead of a ruling from the Connecticut Supreme Court, Republican freshman State Rep. Fred Wilms said Monday, referring to recent developments in lawsuit brought by the Connecticut Coalition for Justice in Educational Funding (CCJEF) .

“We have to see what is going to happen with the Supreme Court,” Duff said, before allowing that he suspects that Gov. Dannel Malloy will make a push otherwise.

Duff was the only Democrat.

“It’s very disappointing our opponents are not here,” State Rep. Terri Wood (R-141) said. “The economy and education are the most important subjects.

It was the second time the PTOC held a candidates forum, PTOC Vice President of Administration Drew Todd said, citing last year’s conversation with Mayor Harry Rilling and his Republican opponent, Kelly Straniti, as a trend setter. About 13 people watched from the audience.

Todd said that he had spoken to State Rep. Chris Perone (D-137) earlier in the day and Perone had said he’d be there. Perone didn’t make it, but his opponent, Darline Perpignan did.

“Norwalk has been shorthanded (by ECS) and I will do everything I possibly can to fight for more funding because I just truly believe in quality education, especially in the district I am running in, the 137th. We have an overcrowding problem,” Perpignan said.

“It really has a lot to do with the leadership, as it’s currently set up,” Ehlers said. “When you look at everybody that is getting a lot of money they have been up there a long time. We are not getting that sway even though we have had someone in leadership for a long time. Dan Malloy has talked about ECS funding, wanting it for Stamford … he’s more worried about keeping a coalition than he is taking care of his own kids. That’s my opinion.”

Ehlers referred to the parts of Moukawsher’s ruling that said the state has not used the ECS formula for the last two years.

The rest of the discussion on the topic was done by incumbents.

Wilms ran for election two years ago with a promise to try to reform the ECS formula. By his estimation, Norwalk is shorted about $40 million a year, he said Monday.

But now he’s sounding like the Democrats, like Perone, who have said that it’s politically impossible to get the legislature to change the formula.

“My impression, having been up there for two years, is that everybody in Hartford wants more funding for their schools.  Everybody thinks they should get more funds,” Wilms said.

The formula was calculated 10-20 years ago, he said.

“It has been rejiggered, reshaped, redone, to the point where it’s basically a political free or all,” Wilms said.

If you’re a leader you can grab an extra $2 million for your district, he said.

Moukawsher gave the legislature 180 days to come up with recommendations for changing the funding, but Attorney General George Jepson appealed to the Supreme Court.

Wood said she didn’t expect a Supreme Court decision for a year.

Wilms said he felt the Supreme Court would rule in favor of changing the educational funding but legislators should be working now to build coalitions to get more money for Norwalk and Stamford. He spoke of the number of votes needed and said the first place to start would be the Norwalk delegation.

Jessica Garnett asked what the community could do to help. Wilms told her to call the legislators after the election and ask them to work together.

“That would be huge progress,” Wilms said, going on to advocate for a formula based on District Reference Groups, an idea he shared with the Norwalk Board of Education last month.

Duff came in 42 minutes into the event.

He had promised children in the Norwalk Police Explorers class that he’d be at their graduation Monday to hand out awards, he said.

Wood challenged that, saying that she didn’t think the tax sharing was in effect yet. Duff said it is.

Malloy proposed in the tough budget process this spring eliminating the tax sharing, which had been created in 2015. LinkedIn reports that the tax sharing is in effect, although at a lower rate than had been approved in 2015.

As for CCJEF, Moukawsher basically ruled against the plaintiffs, Duff said.

“The plaintiff’s whole case was about allocating more funding to the state budget for education and he rejected that, and basically said you have to work within the current system, the budget that is there. That actually presents an interesting issue for the legislature,” Duff said.

Mowkawsher decided on his own to rule on special education, teachers’ evaluations and graduation standards, Duff said, adding that Jepsen accused Moukawsher of judicial overreach.

“With this, it’s now on the top of the mind of the legislators. Obviously, depending on the elections and how this is framed, I think this is really an opportunity for us (to begin reform),” Duff said.

“It’s a constant push and a constant battle to get forward,” Duff said. “…. You look for other ways to help your community.”

Duff said that Norwalk had gotten more money this year through ECS, which Ehlers questioned. Duff stood by the statement.

“Norwalk did not lose a dime,” Duff said.

After the event, Duff hedged, saying he thought that was the case.

In May, Duff said, “There is about a $57,000 cut to ECS but that does not take into account Priority School District money and we have made a couple fixes to that in the state budget so the city of Norwalk and the Norwalk Board of Education should be receiving an additional $70,000 in Priority School money that has been sitting in the state for the year because of a drafting error in the Office of Policy Management (OPM). In addition, they will be receiving the next $70,000 next fiscal year, as well. So we continue to work hard, we continue to fight for money for our city in a responsible way.”

Garnett, on Monday, continued to question about how the educational funding could be changed, asking Duff how the funding pie could be cut up.

Communities have different needs and a one size fits all approach doesn’t work, Duff said.

Norwalk has had an influx of children from Central America, who have been through things most Americans cannot imagine, Duff said.

“They need more than just English as a Second Language, they need a support system to make them successful. That is not necessarily what some kids in Hartford may need. They may have had a school structure, a school that is maybe a little newer but yet they may need more support on the preschool side,” Duff said.

“There’s not a one size fits all approach to how we fund education in the state. What I think is there’s a lot of smart people out there who think about education a lot. There a lot of folks in the state who have been studying this for a long time,” Duff said. “… I really can’t give you a pat answer as to how I would magically rework the formula but I think it’s incumbent on his to listen to the folks who are experts and have been studying this for a long time, listen to parents, really bring a lot of the stakeholders in on this issue and use this opportunity to work for the success of our students and the success of our city.”

A woman said there was a similar court decision 10 years ago in New York, and nothing had changed.

“My Spidey sense is (Malloy’s) going to want to address this head on and this will be an issue in the next legislative session,” Duff said. “I think there’s legislators who want to tackle this issue as well, because its front and center, it’s on people’s minds… My hope, and something that I want to work towards, is that we have a legislative solution, not a court solution. But in the absence of a legislative solution there is the court there as well.”

The “smart money” is betting the Judges’ lengthy decision will overturned on Appeal. And that our Legislators will continue kicking the can down the road for years and years. As they have in the past.
Time for “fresh blood” ? Maybe our grandchildren will have a chance at ECS funding improvement.

A ‘legislative solution’????? You are kidding me Bob. How many years have you had to try to right this wrong through legislation???? That is YOUR JOB as someone elected to represent your home districts interests!

You failed, the peoples last resort are the courts because you have failed. Nice guy sure, but guess what folks. Bob Duff has NOT advocated for Norwalk on ECS nor does he appear to have the will to do so.

“a similar court decision 10 years ago in New York, and nothing had changed” — New York isn’t the only state to have this difficult issue tied up. See
http://www.schoolfunding.info/litigation/litigation.php3

“We have to see what is going to happen with the Supreme Court,” Duff said
“I think Norwalk has received some decent funding over the last few years.” Duff said

I am raising 3 kids through the Norwalk School system and I have repeatedly seen the price all Norwalk kids pay because of our lack of funding. As a parent, it is heartbreaking. As a property owner paying punishing property taxes that have quadrupled on property that has less than doubled, it is infuriating.Senator Duff has not delivered and as a parent and a taxpayer, I cannot continue to turn a blind eye.

Norwalk is short-changed $40M annually, that’s $560M lost during Senator Duff’s tenure. Yet, he has never proposed a bill, never articulated a thought on how the formula should change and when a Freshman legislator bothered to do the work and make a great proposal, he did not lift a finger to help or join the effort. The answer is always “wait or let’s see”. The answer is always about the special money the Senator scraped for us, which is a minute fraction of what we are missing.

If we are serious about getting properly funded, we need 2 things from our Senator:

#1 – A drive / fire in the belly to fight for a change. Rep Wilms is right; all Norwalk legislators need to work together. Change will not be offered to Norwalk on a silver platter. We need people who can decide what formula we need and then fight / barter / plea to get it done. At the end, we may not get 100% of what we deserve, but wouldn’t it feel good to try and great to even get a portion changed? Why do we send people to Hartford if it’s not to negotiate on our behalf? The timing is key here, with the pressure to act because of the court’s decision, legislators will be motivated and we need a Senator who is willing and able to take advantage of that.

#2 – The formula will be easier to change if the pie gets bigger, so we need a Senator who can clean up the fiscal mess in Hartford so our economy can grow again. If our tax code is addressed, regulations shocking businesses removed, and our public pension plans re-negotiated, state revenues will grow and expenses won’t have to be cut so deeply. Every program, including education for all towns, will benefit.

My bet is Ehlers will deliver on both, Duff has not and won’t