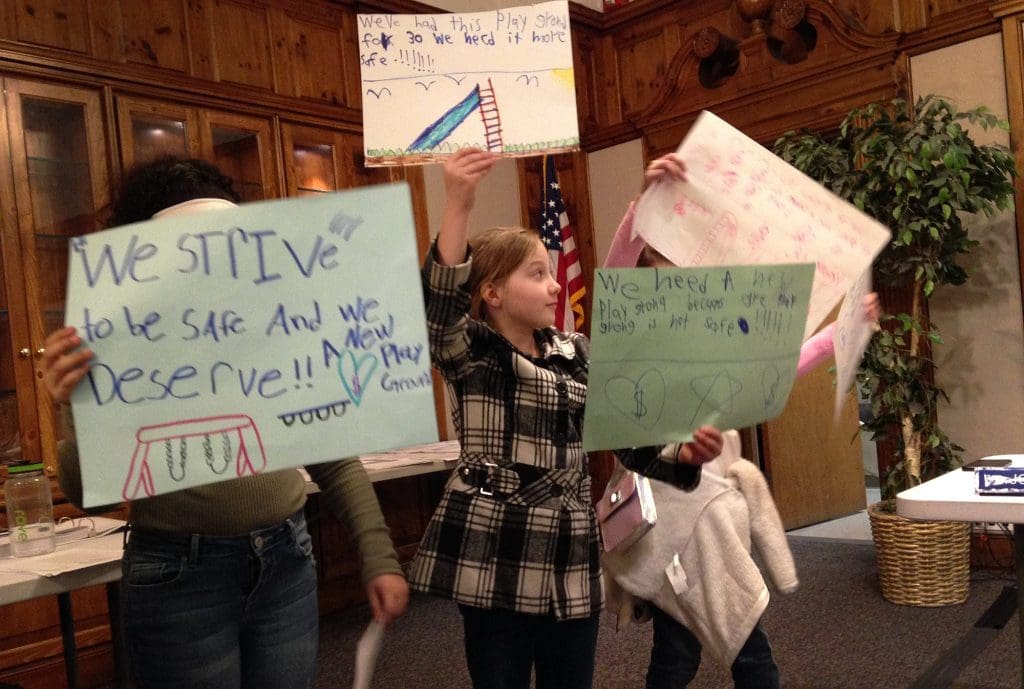 At the outset, a question put to the Commissioners by NancyOnNorwalk Board Chairwoman Claire Schoen instigated an exchange regarding process.  Schoen asked, “What happened to instructional technology? It was not funded when it was requested.  I’d like to know why”, to which  Planning Commission Chairwoman Fran DiMeglio replied “The Finance-recommended numbers are here.  We’re not here to change, his numbers are his numbers….We’re not here to address why he did it.”

Asked to clarify the time frame for the approved new Cranbury School, Hamilton said, “The city Finance Director has posted his recommendations on the City website, and what I read, unless I misread them, included Cranbury School for the upcoming fiscal year funding in 2020-21.”

Urgent need for Silvermine Elementary driveway improvements ($1.5 million was recommended for this by Dachowitz, but to not be spent until next year) was stressed by a half dozen speakers.  Silvermine parent Sasha Carr called the situation “completely unmanageable and unsafe.’

“I’m constantly seeing people almost get hit by cars” she said.  “It’s hard to understand how bad it is if you don’t see it for yourself….It’s a tragedy waiting to happen.”

A Ponus Ridge Middle School teacher decried his school’s antiquated, broken, mismatched furniture. “You built a $44 million building, and then the City decides to cut the furniture!”  Former BOE member Bryan Meek later echoed the complaint: “We’re gonna build a new school and have kids sit on the carpet?  We’re not gonna have desks for them?”

In response to a $5 million school cafeteria/kitchen renovation request being bumped to next year, numerous speakers noted Naramake Elementary’s lack of any cafeteria at all.  Lunch there is served from a tiny kitchen to students who eat in a partitioned section of the gymnasium while gym classes take place on the other side of the partition.  Asked by Commissioner Nora King for a detailed cafeteria cost breakdown, Hamilton replied that such a document already exists, and that he would provide it.

Tracey Magnet School parents and students advocated for a new playground, a project recommended by Dachowitz to move forward in 2020-21 under the auspices of Recreation and Parks.

Decrying Norwalk schools’ lack of solar panels, activist Diane Lauricella asserted that, “We are ten years behind other school districts.”

Accompanied by a passel of Silvermine students, parent Karen Smith stated that the Silvermine playground is 24 years old and needs replacement.

Regarding the recommended $225 million for a new Norwalk High School, King ruminated, “I haven’t really heard from any parents on why we should be investing in Norwalk High School.  No one’s talking about that, so if there’s somebody here that is actually on the pro side, it would be interesting to hear that, because we only have so many dollars… I would like to hear people’s opinion if there are any on that side.”

No one present responded to her invitation.

Regarding Nora’s comment that no one came to the meeting to speak for a new Norwalk High School, that would have been premature because the Board of Education has not approved Education Specifications for the project yet. There is a process.

Great summary of last night. Thank you for being there to report.

It’s really not difficult to figure out — The ELL program is costing every extra cent the public schools have. I’ve been talking about reallocation of resources for months. NO ONE should be surprised. Not only that, but the band aid approach used on ELL is not working. Schools are in crisis. I wish someone would acknowledge that fact. BY the way, ZERO help from State…Thank you to our elected leaders for hiding this issue..

Commissioner Nora King, thank you for the courage to address the 400lb Gorilla in the room: “Bob Duff” High School. According to NoN – roughly 150 Norwalk taxpayers felt compelled to attend this meeting (a pretty decent turnout) – and yet, the commissioner noted:

“I haven’t really heard from any parents on why we should be investing in Norwalk High School. No one’s talking about that…”

Of course not. Because THAT project is not about the parents or pupils – that project appears to be sadly about only one thing: politics.

Question: is the Grand List revaluation for 2019 settled yet?

Folks, in spite of all the urgent needs, great intentions, dreams and aspirations (we sure do want the best for the children), the reality is – there is only so much money. Now some BOE members might think the well is bottomless – but it’s not. No one has even put an annual repayment cost estimate on these proposals.

There are legitimate priorities – and they should be addressed. To the vigilant parents – watch carefully to see if the decisions are priority / fiscally sound decisions, or politically driven. Theme song for Bob Duff High School? The sounds, of silence.

@Patrick Cooper — I agree. Some BOE members really believe Norwalk is wealthy town. Those same members believe in Santa Claus and the Easter Bunny.(Hope no children are reading this)

if duff wants a new high school him pay for it. we don not want it do not need it to provide other towns to use it.
fix the schools we have cranbury is desperate
say no to duff-let him get $$$$$ for norwalk that is his job.
.

Barbara is wrong with her comments above. This is on the agenda for the planning commission to review. It was put in the budget at the last minute and became part of the public hearing. Barbara is on the BOE not on the Planning Commission and clearly doesn’t understand how the process works.

Barbara is right about one thing. The whole idea is premature. And as I predicted, promises to cannibalize a multitude of other projects that are more desperately needed in every corner of the city. Bob Duff couldn’t even come up with the $50k from state to get the ball rolling. Recall Bob was able to get $5 million for PoKo when it was a hole in the ground just before the Mayors first re-election bid. Bob Duff also could have introduced a brief senate bill along with the others, but I guess he’s too busy to come up with paragraph. Is Bob Duff ever going to come clean and explain what is going on? How many millions will Norwalk have to shell out on architectural plans before we actually have real approvals? We’ve already spent several million on plans for the new Ely school. My guess is it will cost north of $5 million just to design NHS.

I will give Bob Duff credit for trying to get $200 million out of one of the most financially strapped states, when it only has $209 million budgeted for schools in ALL 168 towns, but where has this effort been for the past 20 years? During that time Norwalk has generated $10 billion in revenues for the state. Can anyone point me to what we have to show for that? I’m not interested in the scraps. Real projects please that benefit Norwalk, not fish tanks and museum a/cs. For example the route 7 to I95 on ramp.

Here is an idea. Let’s spend some money on zoning enforcement and thereby reduce our need for additional school funding?