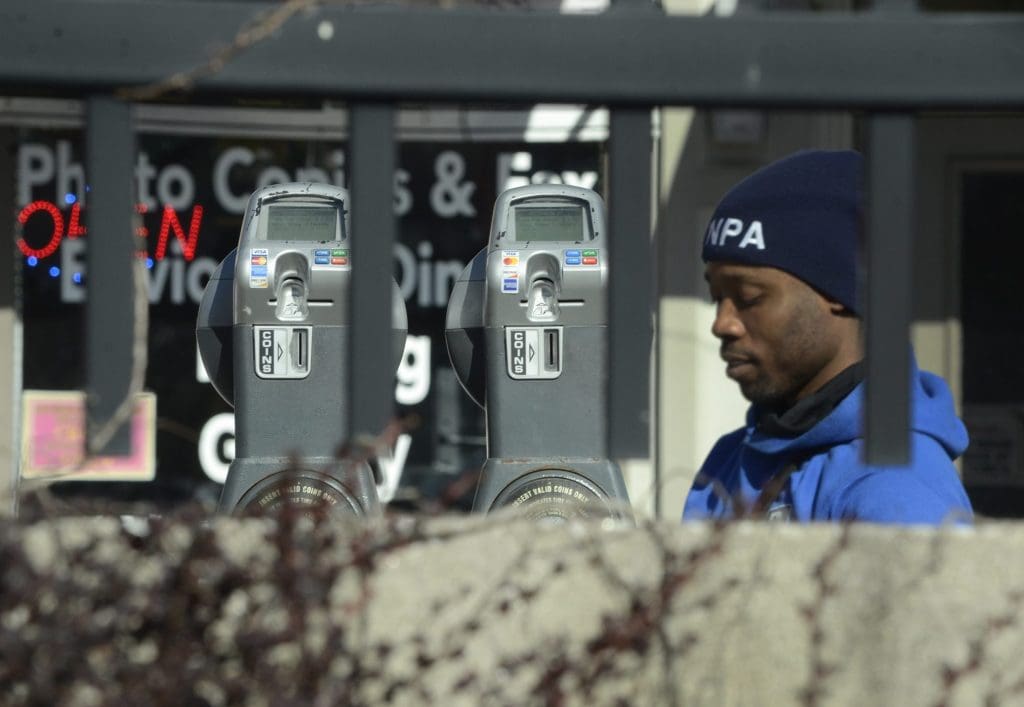 NORWALK, Conn. — Norwalk’s parking operations are returning to a more normal state, with numbers getting back to their pre-COVID levels and stepped-up enforcement resulting in more tickets issued, as a new hire prepares to take things “to the next level.”

James Emery began work in July as Norwalk’s assistant parking director, a new position. He “checked every one of the boxes” Norwalk was looking for and will “bring a fresh set of eyes on what we could do better,” Director of Transportation, Mobility, and Parking James Travers said to the Parking Authority.

Emery mentioned “challenges” and “the unique situation Norwalk is in,” and said, “I think we’ve got a long way to go. But I think with the team that I’ve met so far, I have no doubts that we can get there. And I’m just I’m really excited to see what we can do for the city and the citizens of Norwalk.”

“We’ve done a great job still managing those expenses, and if you factor in the …additional repairs and maintenance that we’ve done in July… we’re back to really just over where we were on the surplus level, the operating surplus for July of 19. So that is a huge accomplishment I think and take a great job to everyone,” he said.

Transient parking, the on-street and parking garage usage, was up more than 70% over what it was two years ago, he said. “It’s actually the highest July numbers we’ve had in terms of demand in the last 10 years… a lot of that is coming from the Maritime Garage.”

That garage is 160% over what it did in 2019, he said, mentioning that the Maritime Aquarium opted into a state program to provide free admission.

Anyone under 18 years old could enter the aquarium for free if they were with a Connecticut resident, through Labor Day, in the Connecticut Summer at the Museum program.

But, “generally speaking, people are just anxious to get out and do things” and “virtually every location is, at or above pre COVID levels in terms of demand,” Manousos said.

Pay be cell phone transactions are way up, he observed.

“Statistically, right now, our pay-by-cell transactions are through the roof, compared to other municipalities in this size, which I think is an interesting statistic, and something that we should definitely keep our eye on when it comes to making future decisions,” Emery said. “Really, really good thing for sure.”

The Parking Authority held back on issuing citations during the COVID-inspired business slow down, stepping up the courtesy card program: sometimes, instead of giving tickets, parking officers left courtesy cards on vehicles telling people how much their ticket would have been.

Recently, the Authority has sought to return its courtesy card program to its original intent, “not an expectation” but a “pleasant surprise,” Manousos said in July.

Manousos said much of the uptick is due to parking violations at Calf Pasture Beach. About 18% of the tickets issued were at the beach, the report states. It shows that 575 tickets were issued at the beach, 413 on Wall Street and 302 in the Webster Lot.

It offers many stats:

The value of the 352 courtesy cards issued in July was $6,300, if instead they were tickets and the money was collected, the report states.

Norwalk held its first citation hearings in 18 months but only eight of the 30 complainants expected showed up, in spite of an outreach program, Emery said. He’s spoken with the legal department to attempt offering hearings on multiple days in October, and with extended hours, he added.

Travers said the backlog of citations on hold was whittled down to 155 through negotiations before Emery came onboard.

Emery replaced Rita Azrelyant, in a position that was “vacant for some time,” Travers said in an email.

The Parking Authority funds the position through a voluntary contribution, Travers said.

“We had a number of great candidates,” but Emery stood out, Travers told the Authority last month. “We were really looking for someone with some strong customer service skills,” who would engage businesses and residents, understanding “the nuances of the businesses, how to get us to the next level.”

He comes from a “largely technical background” and has worked for Travers before, about 12 years ago, Travers said.

Emery was IPS Group Inc. technical support manager for the Eastern United States. He has about a decade of experience in parking, according to a bio on the IPS website.

“I spent the first 4 years in a large municipality on the east coast developing and implementing Smart Parking solutions for the city,” he states on IPS. “I also have 4 years of experience with IPS as the East Coast Project Engineer. I oversaw the beginning logistics of numerous large scale installations throughout the country, and then continued to be on site until the completion of each installation. I have recently been promoted to Senior Tier 3 technical Specialist with IPS Group with operations covering, but not limited to the Eastern United states.”

Parking Authority Chairman Mike Harden said on Aug. 24 that, “the person who held your position prior, had a certain way of doing things… I don’t want to say we’re in a rut, but we’re in a ‘kind of in a way of doing.’… I would look to you to talk more about how you want to run that and how you want the communication string to be.”

“I think that’s actually, you know, one of my strengths. And one of the things that I’m looking forward to obviously, I’ve got a lot of catching up to do,” Emery replied. “…I think that’s perfect … if we’re not all communicating, and we’re not on the same page, and we’re not articulating properly to each other then, like any other team, we’ll fail.”

Let me get this straight. Writing 69 percent more tickets vs. the same time period in 2019 is a good thing? At least that is what the author seems to portray. And now another “new hire” wants to take it to the “next level”. Yikes!

The vast majority of the recipients of these tickets are people coming to Norwalk’s urban core to conduct business whether by patronizing a local restaurant, going to the dentist, shop, or to a business meeting. After one ticket how likely are they to come back? How about after two tickets?

It’s not a coincidence that during the same time period that NPA burdened SoNo with draconian parking regulation (roughly 2006-date) that same time period saw the rise of downtown Darien and Westport as entertainment hotspots. Where SoNo use to reign supreme it’s now an afterthought. If it wasn’t for the rapid gentrification of SoNo, Washington Street retail would be dead.

At our recent Wall Street Neighborhood Association meeting last week, which was well attended with over 25 people, mostly business owners, the topic of parking fees and tickets was the hot topic, again. Business owner after business owner spoke passionately about the negative impact the NPA is having on their businesses as relentless ticketing decimates their customer base.

Clearly with a 69 percent increase in ticketing NPA is not getting back on its feet again, its over-reacting.

Wall Street is just getting off the ground but thanks to the NPA it’s a possibility that parking fees could choke out the growth and desire for new business to relocate here. If we allow this type of institutionalized parking thuggery to continue, I fear that the Wall Street area will go the same way as SoNo, but without the gentrification needed to support it.

To steal a line from Brando “… Wall Street could’a been a contenda…” But the one-two punch of POKO and draconian Parking Policy is a bit much to handle. Parking fees are essential and should serve a purpose, not line the pockets of a private, for-profit company at the expense of the small business owner.

Mr. Emery, I’d like to personally, and publicly, invite you and Mr. Harden (Board Chair of NPA) to the next Wall Street Neighborhood Association meeting as our key speakers. Please come and hear what NPA policies are doing to the economic wellbeing of our neighborhood.

Paying to park seems very unwelcoming in today’s world. Is it so important to extort to leave your car while you spend $$ in a restaurant or shop? I am not a fan of paying to park.

Its insulting to the residents and businesses in Norwalk that pay taxes to have to pay to park on city owned streets. If you wish to use the parking garage then paying extra is ok. If you are one second late one of those guys or gals in the shiny expensive trucks will drop a ticket on you. I can bet the mayor has no comment?

Welcome back Nancy, we’ve missed you !

I hope your well deserved vacation was all you hoped it would be. 😊

Exactly Audrey. After the predatory parking agents lie in waiting minutes before the time is set to expire we have not visited businesses that require paid parking.

Risking the extra parking fines if your a minute late is not worth it.

There are many other businesses outside of Norwalk that provide free parking that are just as good.

What about the tickets for out of towners at the beach – does the city ever collect that money? Remember they use to get it at the gate not after the fact.

It would seem that parking is a pretty straightforward issue (no pun intended). You pull the car into the parking spot, lock the doors and do whatever you’re there to do, and hope the vehicle is there and intact on your return. Pretty simple, right?

It would also seem that everything else that our fine city parking officials engage in is designed for one thing only, which is extracting revenue from parkers.

I’d love it if the “parking experts” would let me know what I’m missing?

St. Petersburgh florida has a program where when your meter expires you will have a golden ticket.
Essentially you show proof you spent $30.00 shopping dining and you provide the receipt to the parking authority and your ticket is forgiven. Mentioned this many times to City Hall. Heard crickets. It took years to follow Florida’s bright light cross walks we finally see at Norwalk High. So many best practices we just ignore.

To the point. we find it so much easier to dine out in Fairfield, Westport any where else because of the parking.

James is a great addition to TMP.

For all y’all who are complaining about paying for parking – the land you’re parking on is prime real estate! It’s a scarce resource and thus should be priced accordingly.

What will we end up with if our housing is expensive but our parking is free? More cars, fewer people. The best cities are moving in the other direction – more people, fewer cars.

For all y’all who are complaining about having to pay parking tickets – you realize you’re claiming that your illegal behavior should be exempt from consequences?