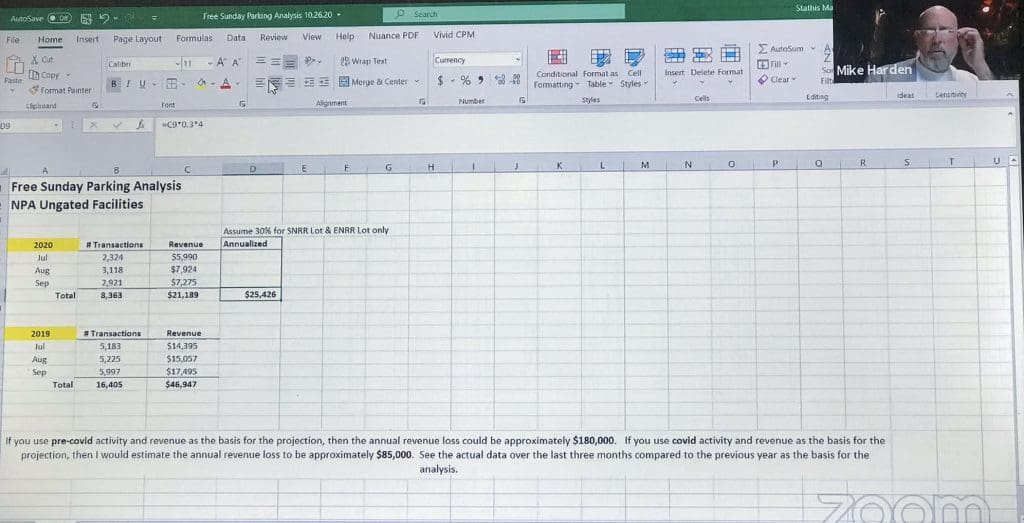 NORWALK, Conn. – The Norwalk Parking Authority, hurting for revenue in light of COVID-19, has voted to sacrifice revenue so that SoNo business might be stimulated on Sundays.

Also reviewed in Wednesday’s meeting was finances, with members noting that fewer tickets have been issued recently.

Norwalk is the only non-Amtrak municipality along the Metro North line that charges for train station parking on Sunday, Parking Authority member Jud Aley said, calling it a mistake.

“I think, if we make it free on Sunday, it’s going to bring more people into Norwalk on the weekends,” Aley said.

To be clear, this idea does not include the parking garages. The Authority was only discussing the lots.

The loss by making the lots free would not be very significant, said Laz Parking Vice President Stathis Manousos. He mentioned $25,000 a year and $2,000 a month. But it could cannibalize revenue at the Webster lot, if people go to the train station instead, “but I don’t really think that’s going to be that significant, either.”

“It just brings us more in line with surrounding municipalities. You know, it’s one less thing for people to complain about, you know, Norwalk being too aggressive with parking,” Aley said.

“I think it’s a great idea. I think to you know, Jud’s point, I think it gives a really good message of parking, I think it gets people to SoNo and to East Ave., which I think is helpful,” Norwalk Chief of Economic and Community Development Jessica Casey said.

It might be for a year or it might just be during COVID, while the executive order is active, she said.

“I like the idea. I mean, both lots are a little bit removed from active areas,” Parking Authority Chairman Mike Harden said.

The idea sprang from the realization that a bicycle club was skipping Norwalk because of the fees, Harden said. So, “bring more people, which I think is a good idea.”

Oz has a right to 40 spaces close to his building, reserved for tenants use, Casey explained. Then there are 346 non-reserved spaces available to tenants, spaces that permit holders compete with transient parkers for, all over the lot.

But when new tenants are negotiating, the Authority would have a representative on hand, Harden said. “The Authority will discuss the possibility of locking into a rate that can stay consistent for the lifetime lease for those spaces, including the option years.”

If the lot is redeveloped – which isn’t expected soon – the agreements would dissolve.

“This will allow the Parking Authority to manage parking effectively over time, instead of agreeing to a block of parking for a 20-year period of time,” Harden said.

Oz had reported losing a lease with a large company because of parking issues, Harden said.

“This is our attempt to become his, a little bit more of a partner of his in this to get more people in his building and try to bring more people to Norwalk,” Harden said.

“I think we need to work with him,” Aley said. “ think he makes a good point. It’s a big building. There’s a lot of people that could be in there. And you know, it’s a lot of residual business for South Norwalk.”

Parking Authority member Tom Vetter asked if the Authority would be obligated to give Oz more parking spaces if he asked.

“No, no, not at all,” Harden said. “We one of the reasons why we want him to come to us is because we have to determine whether or not we even have the spaces for him.”

Common Council member George Tsiranides (D-District D) suggested that C-Town, a supermarket in a neighboring building, might come in with a similar request.

“It doesn’t change anything in terms of his tenants parking, but what it does is it lends us a little bit more control, it brings us in to any new tenants earlier on and gives us the opportunity to negotiate,” Harden said.

This deal will be presented to Oz.

Ticketing is way down, Manousos said.

“We’re ticketing at a lower rate than past years, for the most part, fairly substantially. And I think given the COVID virus, we want to keep it that way,” Aley said.

The Parking Authority has had a courtesy card program: rather than issue a ticket, the officer puts a card on the windshield indicating that a ticket could have been given.

“We have to give out some tickets, or people abuse the system,” Aley said.

In finances, the Authority is of course losing money during COVID but less than projected.

This would be a great time to do a deep dive on the overall Norwalk Parking Authority (NPA) budget.

At $7.3 million (current budget) to operate four parking garages that total 710,490 square feet, that equates to a per square foot operating expense of $10.27 per square foot.

Note that this does not included any real estate taxes as the garages are owned by the City.

By comparison, the most expensive buildings to operate are large high raise office buildings like Merritt 7, or those along Connecticut Avenue. These office building have a range of operating expense from $10.00 – $12.50 per square foot not including real estate taxes.

By comparison a warehouse building is more like $2.00 to $3.00 per square foot without real estate taxes.

I’ve been asking NPA for years why is it so expensive to run the parking system but they never provide a clear answer. And I can’t ferret it out of their budget figures, its to opaque.

Sadly, high costs to run the NPA is ultimately passed through to the taxpayer since high parking fees chase business away – that results in lower commercial property values which places the burden on the homeowner.

But as NPA noted above, and I paraphrase ‘if we have lower parking fees more people would be attracted to having their business here.’

Helping 50 Washington Street is nice, but how about helping the rest of us? Waste like this needs to go.

@Mike, I don’t discourage this line of thinking, but one thing you seem to have discounted is the engineering load and wear and tear of an overhead concrete parking structure. The office buildings are subject to a fractional load and warehouses typically do not have forklifts go up on the 2nd, 3rd, and nth floors. When I was on the NPA we had to put $1 million in repairs in Yankee Doodle and I forget how much on Haviland, but both were about to be condemned due to decades of neglect by DPW who used to maintain them.

Giving praise where praise is due, Mayor Knopp put the city on solid footing by making this an enterprise zone. We were paying meter maids $55 to write a $25 parking ticket and the infrastructure was going to seed being bypassed by much more needed improvements city wide having to compete with DPWs overall capital budget.

Again, I don’t discourage your line of thinking, but you are missing some details. It’s just an educated guess, but given the labor and productivity differences, my hunch is NPAs budget would need to be about $12 million if DPW were to operate it again, but safely this time.