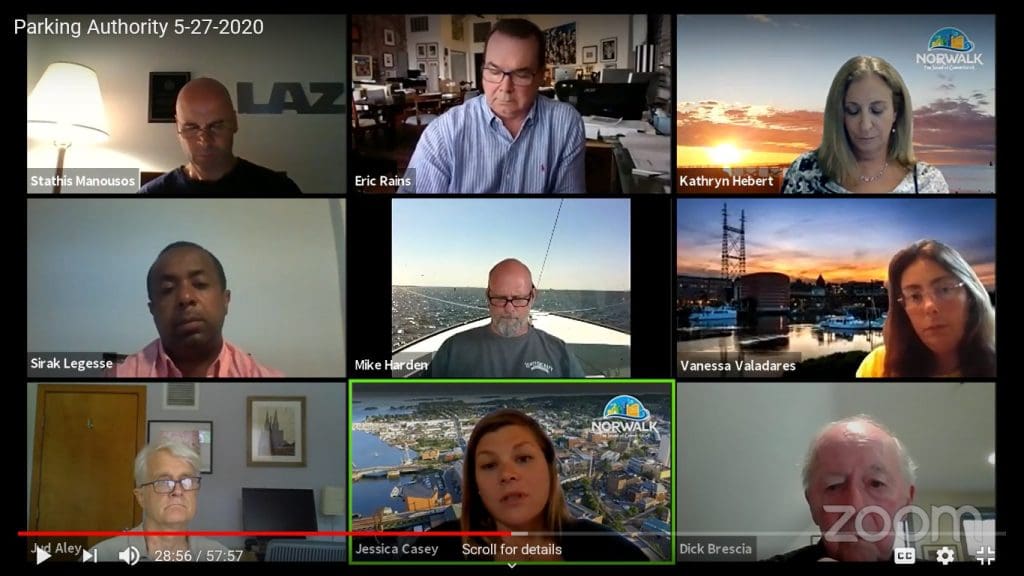 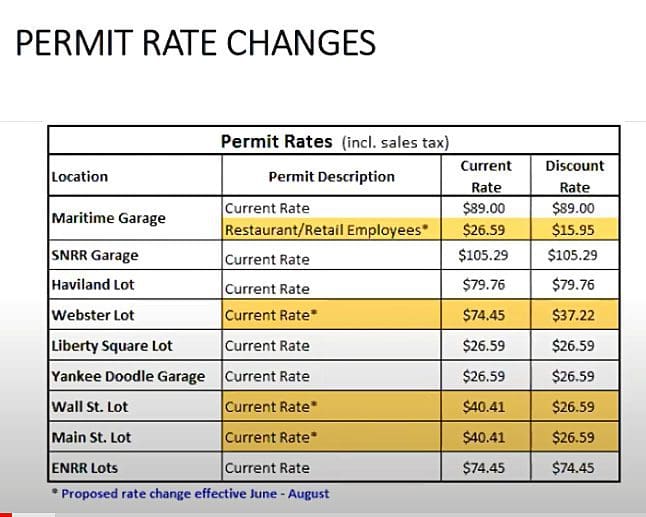 NORWALK, Conn. — Norwalk parking meters will be back in operation Monday, by unanimous vote of the Parking Authority.

Parking in the City has been free since March 18, due to the COVID-19 crisis.

Authority members, in their Thursday meeting, expressed hope that initial “relaxed enforcement” will mitigate public displeasure about the resumed parking fees.  But despite having deliberated for many weeks, the Authority’s decision lacked specific guidelines for what relaxed enforcement will entail, or how long it will be in effect.  Several differing durations for the relaxed period were mentioned at various points in the meeting, but no firm time frame was decided upon.

“As we review this, we’ll be meeting twice a month in June and I assume we’ll be doing the same thing in July,” Authority Chairman Dick Brescia said.

The general plan is for enforcement agents to initially place a “courtesy card” on violators’ windshields in lieu of a ticket.

“The first pass for everyone who overstays, they get a courtesy card” Authority member Jud Aley said.  “There’s no tickets on the first pass for the first two weeks, and if you come back 20 minutes later, or 35 or 30 then you’re going to get a ticket.”

“The courtesy cards have been tremendous for us,” Authority member Eric Rains said.  “By expanding the umbrella of the courtesy card to help people acknowledge that they could have gotten a ticket but didn’t is a tremendous PR move.”

Authority member Mike Harden questioned the need for permit discounts: “People are anticipating needing these permits and getting back to work.  I’m not 100 percent sure why we would discount anything…If I’m headed back to work June 1 and I call up to get my permit back I kind of expect to just buy the permit.  I don’t know why it would be discounted.”

“The discount period is only for the first couple of months” Aley replied.

“I understand that.  But it’s complicating things” Harden said.   “Our parking system has basically been shut off partly as a courtesy from us and partly because nobody’s been using anything.  Now that people are coming back to use them, we should just turn them back on and let them use them as they do.”

Brescia said, “When it was presented initially by Jud and Eric, one of the reasons for the discount in places like Webster Lot was to try to move people off of the streets and into the lots, and so as an initial start I think that’s a sound plan.”

Authority member Eric Rains said, “One of the reasons is the P.R. side of it.  And it’s a way to ease back into full swing.”

Norwalk Director of Transportation, Mobility and Parking Kathryn Hebert spoke of the new Washington Street pedestrian walkway: “The Parking Authority collaborated with the city last week for the installation of outdoor dining and curbside pickup and delivery on Washington Street, taking 28 very active parking spaces out of service to assist the business community’s reopening operations.  This will have an impact on revenues through the outdoor dining period of about $50,000.  The Parking Authority will continue to evaluate and make adjustments when necessary. “

Rains said, “It occurred to us that the displaced cars (from Washington Street) would all wind up on Elizabeth Street, where it’s a two hour parking limit with no meter, pay-by-cell.  The first step here would be to make sure that when enforcement begins, enforcement on Elizabeth Street occurs so that the parking from Washington Street doesn’t occupy those spaces for longer than they should.” 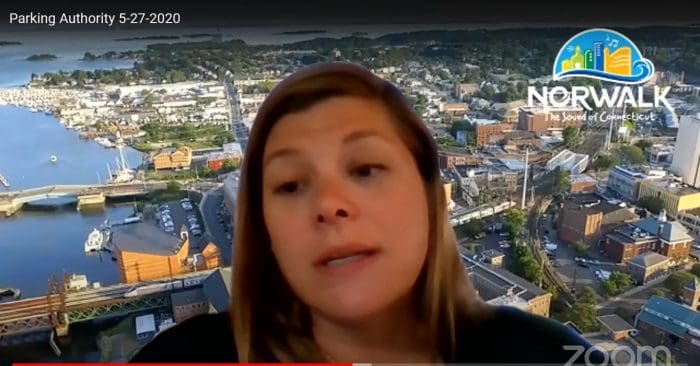 “From an economic standpoint, I’m really concerned about it.  We’re not up and running 100 percent,” she said.  “We only have outdoor dining and outdoor retail.  The economy is not 100 percent engaged yet. May 20 was the first day.  If we start June 1st, I’m concerned about what that looks like as far as being able to support local businesses and getting people downtown and into the areas where we would like them to do business.”

“If we start charging for parking on June 1st, it doesn’t fit,” Casey continued.   “We need to give it a little more time.  People are hugely appreciative of the free parking for April and for May.  And I realize that it’s a hit on the revenue.   But June 1st is too early, because of where we’re at with the state executive order, and how many businesses are open and how many are not.  It’s going to look and feel like people are being asked to make additional payments.”

“When I walked down Washington Street today there were three new ‘For Lease’ signs in the storefronts that weren’t there three weeks ago.  My main concern is getting people down there, getting parked and making it as easy as possible for them so they’re in a position to spend money and shop and support the businesses.  My strong recommendation is to push it back a little bit.”

“I kind of agree and disagree with what Jessica is saying,” Brescia said.  “We’re going to ease our way into this in the month of June and the enforcement is going to be laid back if we use the first couple of weeks in June to introduce what we’re doing.  I would just as soon we move forward with the plan that  Eric and Jud have put together starting June 1st,  but we also utilize the courtesy cards to introduce people to the fact that if they’ve overstayed something and they look at the courtesy card it’s going to say they would be getting a ticket for $25 starting on July 1.”

Does anyone know where the free 10-minute (or however many minutes) spaces are? I often have to run short errands, especially on River Street. I am not willing to pay to park for a 5-minute errand. I would rather find one of the free spaces and have to walk a block or so.

Full disclaimer – I am for parking fees where reasonable. However, I’m still confused. I’ve been asking to better understand why our Parking Authority (PA) budget is $7,335,000 for 2020? I was told that there is a lot of debt service. OK, that debt service amounted to $922,000 per the budget. So removing that shows that the operating costs are $6,433,000 for 2020. I asked again, In fact I’ve been asking for years, and no one will give me an answer.

Does $6.43 million to run a PA seem unusually high to anyone? It does to me. The reason is that the cost to run a good quality warehouse building (after all a parking lot, or parking garage is just a form of warehousing) is around $2.50- $3.00 per square foot of building area not including real estate taxes. Why no taxes? Because the PA does not pay real estate taxes.

Let’s use $2.0 million as a reasonable number as a good market comparison as to what it should cost to operate the PA parking system. I include all the surface (non-street) parking lot spaces as they are roughly equivalent to the parking areas around good warehouse buildings. To this lets add around $1.1 million for added labor (15 people x $75,000 per year average). All told $3.1 million

Maybe I am missing something here but if I’m not, it’s this type of excessive and uncontrolled taxing and fees that is eroding Norwalk’s quality of life? Imagine what our parking rates would be if we could “give back” the $3.33 million in parking fees.

Let see that’s $3.33 million/$6.43 million, or 52 percent – Wow. Imagine if all our parking lot fees and street spaces could be lowered by 52 percent. After all, if someone is parking in a PA space they are usually transacting business in some fashion, be it entertainment (dining, movies etc.) or visiting another business during business hours, all things that go to aid our small businesses. Pssst – we don’t have any large businesses supported by the PA.

So I would think that as an aid to bolster the small business community here in Norwalk, and as a way to make Norwalk much more user friendly, maybe we should be taking a closer look at the PA and how it operates. Maybe change is warranted.

Personally, I would not benchmark this against other similar sized cities, that is just allowing the opaque to hide the opaque. Instead I would drill down into the line item costs and run a check against market norms, perhaps bid them out. I think Norwalk Chief Financial Officer Henry Dachowitz would be the right person for the job. And how about a task force of interested citizens.

Hey, maybe I’m wrong. But isn’t this the way government is supposed to work?

When that relaxed enforcement ends, be 110% positive that the parking nazis will be out in full force. You thought they were bad before, they have 3 months of catch up to make…

Mr McGuire posses some good questions. How many people work for the PA? $6mm +++. Yikes