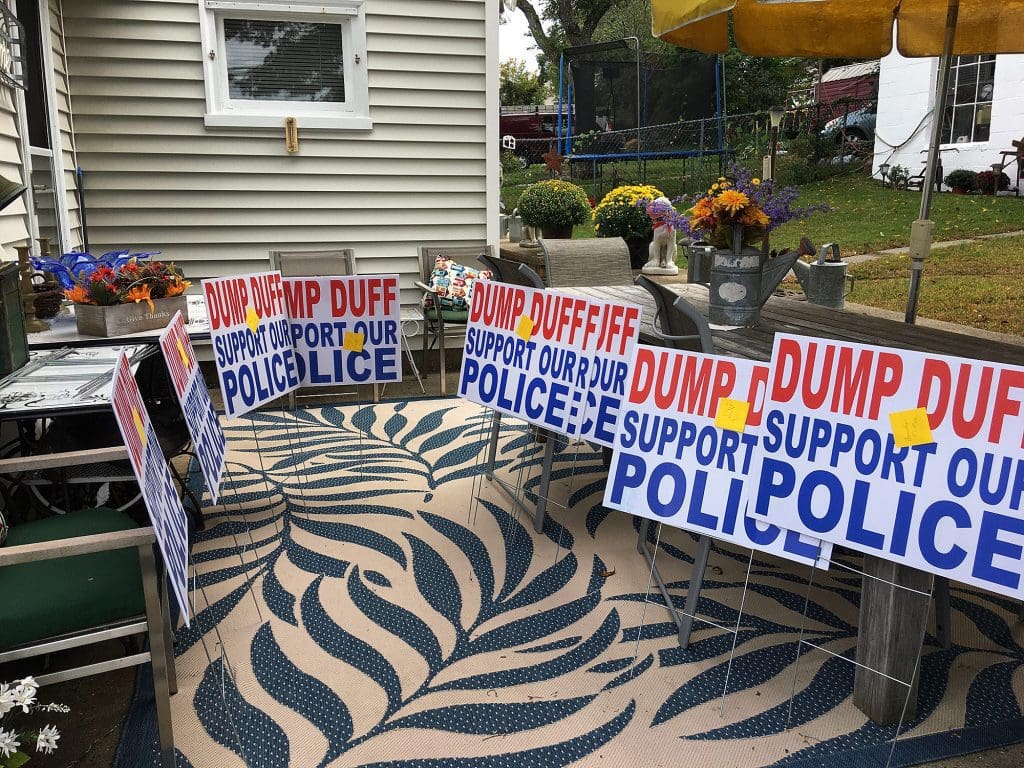 NORWALK, Conn. — Karen Doyle Lyons submitted this photo Sunday. “Pickup” of the political signs began Saturday and “and almost all gone from first order,” she said.

The first order was 30 signs, she said. “Lots more requests.”

This is absolutely ridiculous and must stop. Our police force is bipartisan. Stop politicizing them, it isn’t right to do that.

Can I get a few of those signs please. Where can I pick up?

For everyone of the “Dump Duff” signs you should be putting out 5 signs for Ellie. (Bob Duff should send Karen Lyons a thank you note for all the publicity)

Don’t you understand that any press or publicity for Duff helps? Most people don’t know what’s going on and all you’ve done is remind them that Duff is on the ballot.

People get so angry that it clouds their judgment and decision making. If you really want to defeat Duff you would know that these signs only help his cause and do zero to help your candidate.

Focus on Ellie and her campaign, let Duff do what he is going to do.

His strategy is working, he has his opponents mentioning him more than his supporters. Just read every local facebook rant… its duff this and duff that… no real mention of Ellie and what she is all about.

For the record, I think Duffs time is up but he is not going to lose this election. I know that Ellie is running against him but all I know about her is that she is anti-everything duff. I have no idea about her background or platform…and I’m actually trying to follow who the candidates are.
Most voters have no idea until they show up at the poll. Her campaign needs to step up and get her name and ideas out there if she is to really have a chance, and that doesn’t mean piggy-backing on whatever dust Duff is kicking up.

Beyond just Duff/Kousidis, this whole race is embarrassing for Republicans. This is the same sort of nonsense you get out of KY Democrats constantly trying to take down Mitch McConnell. You’ll never win just by beating the opposition’s leader in a single race. It’s a moronic strategy that ignores the actual statewide political environment.

If Duff goes down in a Democratic-controlled state senate, his replacement will either be his hand-picked protege or a more-competent challenger. That’s it.

Thank you all for supporting our Police. Dump Duff … Support our Police signs have been stolen from so many and even some of our police yards.
T8me for step up and say No to stealing. Wait he won’t stand up for you or your personal property…….
never has and won’t now… he just goes Go Democrats right or wrong activities